Why did this story drive the whole country nuts? Because we traded rights for "security," and didn't get either 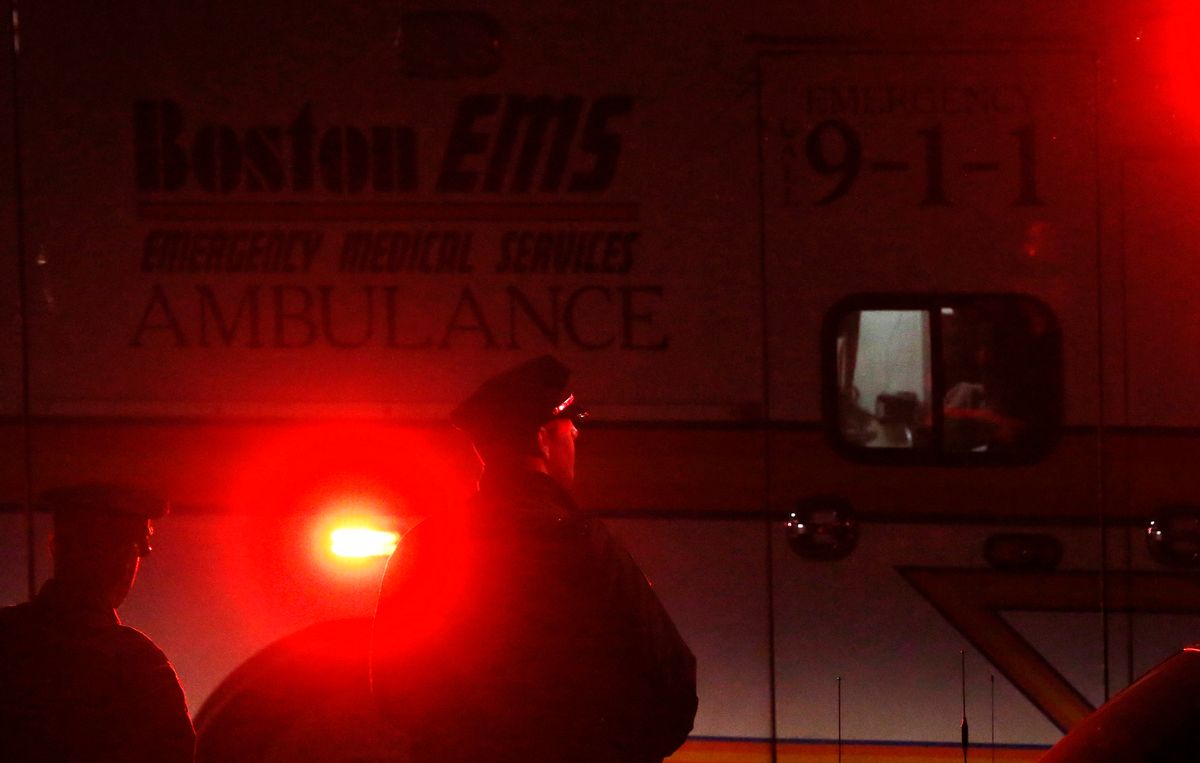 Police watch as an ambulance leaves Franklin Street at the end of the search for Dzhokhar Tsarnaev, the surviving suspect in the Boston Marathon bombings, in Watertown, Mass. on Friday. (Reuters)
--

To put it mildly, this has been a bad week for democracy and a worse one for public discourse. In the minutes and hours after the bombs went off in Boston last Monday, marathon runners, first responders and many ordinary citizens responded to a chaotic situation with great courage and generosity, not knowing whether they might be putting their own lives at risk. Since then, though, it’s mostly been a massive and disheartening national freakout, with pundits, politicians, major news outlets and the self-appointed sleuths of the Internet – in fact, nearly everyone besides those directly affected by the attack – heaping disgrace upon themselves.

We’ve seen the most famous TV network in the news business repeatedly botch basic facts, while one of the country’s largest-circulation newspapers misreported the number of people killed, launched a wave of hysteria over a “Saudi national” who turned out to have nothing to do with the crime, and then published a cover photo suggesting that two other guys (also innocent) might be the bombers. We’ve seen the vaunted crowd-sourcing capability of Reddit degenerate into self-reinforcing mass delusion, in which a bunch of people whose law-enforcement expertise consisted of massive doses of “CSI” convinced themselves that a missing college student was one of the bombing suspects. (He wasn’t – and with that young man’s fate still unknown, how does his family feel today?)

We’ve watched elected officials and political commentators struggle to twist every nubbin of news or rumor toward some perceived short-term tactical advantage. It was as if the only real importance of this horrific but modestly scaled terrorist attack lay in how it could prove the essential rightness of one’s existing worldview, and -- of course! -- how it would play in the 2014 midterms. On the right, people were sure the Boston bombings were part of a massive jihadi plot – no doubt one linked to al-Qaida and Iran and Saddam Hussein and all the other landmarks in the connect-the-dots paranoid worldview of Islamophobia. (In fact, many people are still convinced of that.) On the left we heard a lot of theories about Patriots' Day and Waco and Oklahoma City, along with the argument that it would be better for global peace if the bombers turned out to be white Americans rather than foreign Muslims. (I sympathize with the underlying point David Sirota was making there, by the way, but the way it was phrased was deliberately inflammatory.)

How long did it take conservative pundits and politicians, after the bombing suspects were identified as Tamerlan and Dzhokhar Tsarnaev, immigrant brothers of Chechen heritage born in Kyrgyzstan, to seize on that fact as a reason to walk back the supposed Republican change of heart on immigration reform? Was it even five minutes? Never mind that the young men in question came here as war refugees in childhood, one was an American citizen and the other a legal resident, and we still have no idea what role their religion and national background may or may not have played in motivating the crime. It’s hard to imagine what possible immigration laws could have categorically excluded them, short of a magic anti-Muslim force field. And don’t even get me started on the irrelevant but unavoidable fact that the shameless, butt-licking lackeys of the Senate’s Republican caucus (with a few Democrats along for the ride) took advantage of the post-Boston confusion to do Wayne LaPierre’s bidding and kill a modest gun-reform bill supported by nearly the entire American public.

I might have assumed, in other circumstances, that the Family Research Council’s press release suggesting that the Boston bombings were caused by abortion, “sexual liberalism” and hostility to religion was actually an Onion article. Or that right-wing pundit Pat Dollard’s now-famous tweet (“GEORGE BUSH KEPT US SAFE FOR 8 YEARS”) came from some Brooklyn hipster’s parody account. But nothing, it seems, is too painful or stupid or wrong for this particular week. There are many reasons why this happened: A terrorist bombing at the Boston Marathon is a big news story by any measure, and this news story happened in a disordered media climate that’s changing so fast no one can keep up with it. Our political culture is so fundamentally broken and divided that people on all sides seized on the story as a weapon and a symbol long before we had any idea who was behind the crime. (It would be almost too perfect if the loaded question of whether the Boston bombings were foreign or domestic terrorism turns out not to have a clear answer, as now seems possible: A little bit of both, but not quite either.)

But I think the real reason why this gruesome but small-scale attack sent the whole country into such an incoherent panic lies a little deeper than that. As a New Yorker who lived through 9/11, by the way, I’m aware that the trauma felt by people in and around Boston, whether or not they were directly affected, is real and likely to last quite a while. What I’m talking about is the media spectacle of fear and unreason delivered via TV, news sites and social media, the nationwide hysteria that made a vicious act apparently perpetrated by two losers with backpack bombs seem like an “existential threat” (to borrow a little bogus “Homeland”-speak) to the most powerful nation in the world.

Because it was, in a way. In America after 9/11, we made a deal with the devil, or with Dick Cheney, which is much the same thing. We agreed to give up most of our enumerated rights and civil liberties (except for the sacrosanct Second Amendment, of course) in exchange for a lot of hyper-patriotic tough talk, the promise of “security” and the freedom to go on sitting on our asses and consuming whatever the hell we wanted to. Don’t look the other way and tell me that you signed a petition or voted for John Kerry or whatever. The fact is that whatever dignified private opinions you and I may hold, we did not do enough to stop it, and our constitutional rights are now deemed to be partial or provisional rather than absolute, do not necessarily apply to everyone, and can be revoked by the government at any time.

The supposed tradeoff for that sacrifice was that we would be protected, at least for a while, from the political violence and terrorism and low-level warfare that is nearly an everyday occurrence in many parts of the world. According to the Afghan government, for example, a NATO air attack on April 6 killed 17 civilians in Kunar province, 12 of them children. We’ve heard almost nothing about that on this side of the world, partly because the United States military has not yet admitted that it even happened. But it’s not entirely fair to suggest that Americans think one kid killed by a bomb in Boston is worth more than 12 kids killed in Afghanistan. It’s more that we live in a profoundly asymmetrical world, and the dead child in Boston is surprising in a way any number of dead children in Afghanistan, horrifyingly enough, are not. He lived in a protected zone, after all, a place that was supposed to be sealed off from history, isolated from the blood and turmoil of the world. But of course that was a lie.

We are supposed to be protected, and then something like Boston comes along, a small-minded and bloody attack that appears to have been conducted by a couple of guys flying under the radar of law enforcement or national intelligence, pursuing some obscure agenda we will probably never understand. (We have recently learned that Tamerlan Tsarnaev and his family were interviewed by the FBI in 2011, apparently at the request of Russian intelligence, and agents found "no derogatory information." Is that the right's new Benghazi I smell?) Not only does it conjure up all the leftover post-traumatic jitters from 9/11 – which for many of us will be there for the rest of our lives – it also makes clear that our Faustian bargain was completely bogus, and the devil never intended to hold up his end of the deal. We surrendered our rights to a government of war criminals, who promised us certainty and security in a world that offers none. We should have known better, and in fact we did. At the literal birth moment of American democracy, Benjamin Franklin summed it up in a single sentence: “Those who would give up essential liberty to obtain a little temporary safety, deserve neither liberty nor safety.”