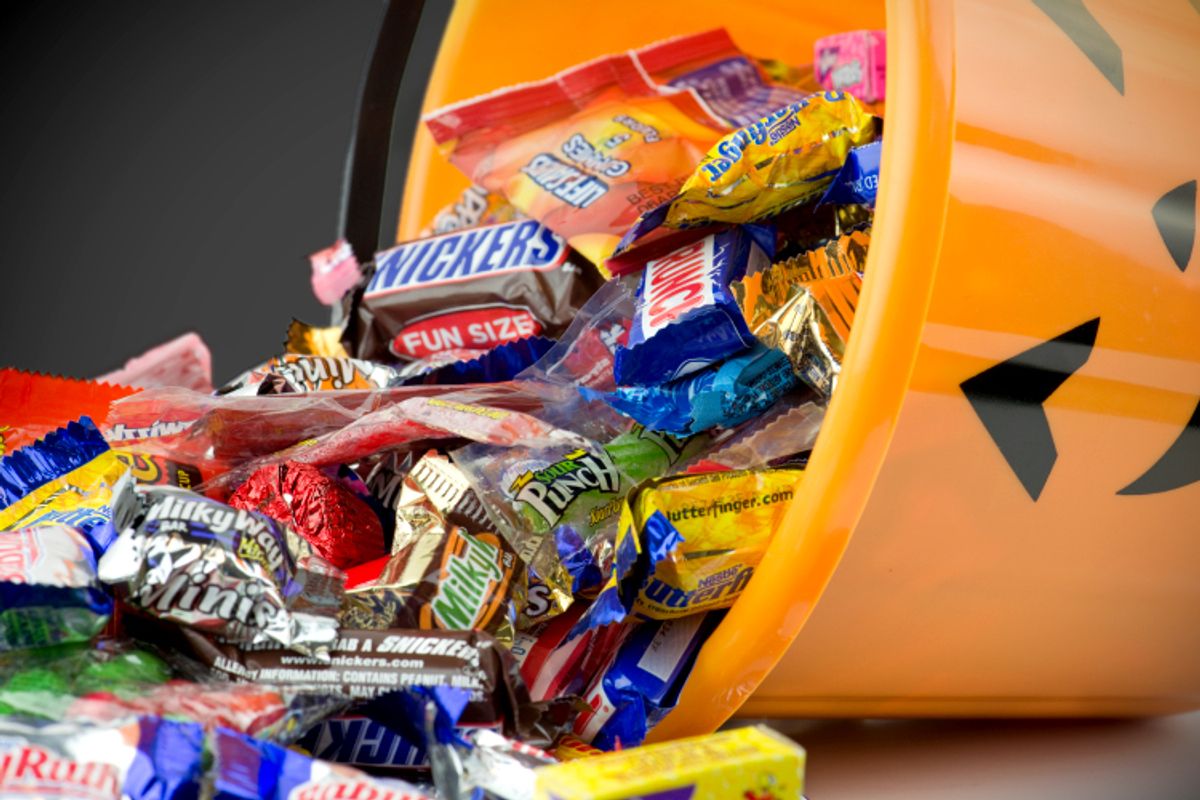 Seems somebody must really want her house to get egged this Halloween. This week, a horrible person in North Dakota seemingly announced her plan to hand out, along with candy, letters to trick-or-treaters she deems overweight telling their moms and dads to "step up as a parent and ration candy." And you thought getting Twizzlers was a disappointment.

The local helpy helperton, who identifies herself only as Cheryl, called the radio station Y94 Morning Playhouse earlier this week to discuss "this plan … so maybe other people could take an idea from me." As Cheryl explained, "I'm going to be totally neighborly, and I've got a plan to hand out all of the candy, but I also have a pile of envelopes. I've written a letter and I'm putting it in sealed envelope and I'm going to put 'gift to your parents' on the envelope. I want to send a message to the parents of kids who are really overweight …. I think it's really irresponsible of parents to send them out looking for free candy because all of the other kids are doing it. I feel like I'm contributing to their health problem." And when asked why she doesn't instead just hand out stickers or toys, she seriously said, "I don't want to be the mean lady. I don't want to be the lady everybody avoids ... I don't want to be against tradition."

In the letter, which Cheryl describes as "tasteful," she tells parents that "Your child, in my opinion, is moderately obese and should not be consuming sugar and treats to the extent of some children this Halloween." She then goes on to tell parent to "step up" and "not allow your child to continue these unhealthy habits." The same unhealthy habit she told Y94 was a "tradition." In other words, it seems it's only unhealthy if Cheryl thinks your kid is too fat, if she decides that, as she puts it, "You're raising your kid just to eat chocolate all the time." On Halloween.

Appropriately for the holiday, Cheryl's initiative has provoked a fair amount of horror. Speaking with Fargo's Valley News, NDSU assistant professor of clinical psychology Dr. Katie Gordon said, "It's just that kind of thing that for some kids, if they're vulnerable, might trigger major problems." But as some bloggers have skeptically pointed out, a caller to a morning zoo show might not be making a true statement of intent. And if it's just a bit, though, it's certainly given the station plenty of attention -- just like its famous "Donna the deer crossing lady" prank last year.

Yet Cheryl's alleged quest swiftly touched a collective nerve because it doesn't at all seem far-fetched. In recent years, Halloween has become an increasingly agenda-driven festivity, with an emphasis on allergy-free goodies and the grim news stories about where your cocoa and palm oil are sourced. Somewhere along the way, toothbrushes and pencils have become acceptable treat currency. And childhood obesity is a serious health problem in our country, one that is largely a result of environmental factors. Shaming children and their parents, in the form of tactlessly worded school fitness letters, misguided, mopey ad campaigns  or Disney initiatives equating weight with villainy has become commonplace. Kids and their parents are surrounded by messages that they are weak and bad, and that they therefore don't deserve to share in the same pleasures as their thin counterparts. In short, whether Cheryl is real or just a cynical Halloween trick from a desperate radio station zoo, her mean, petty sentiment feels depressingly authentic.