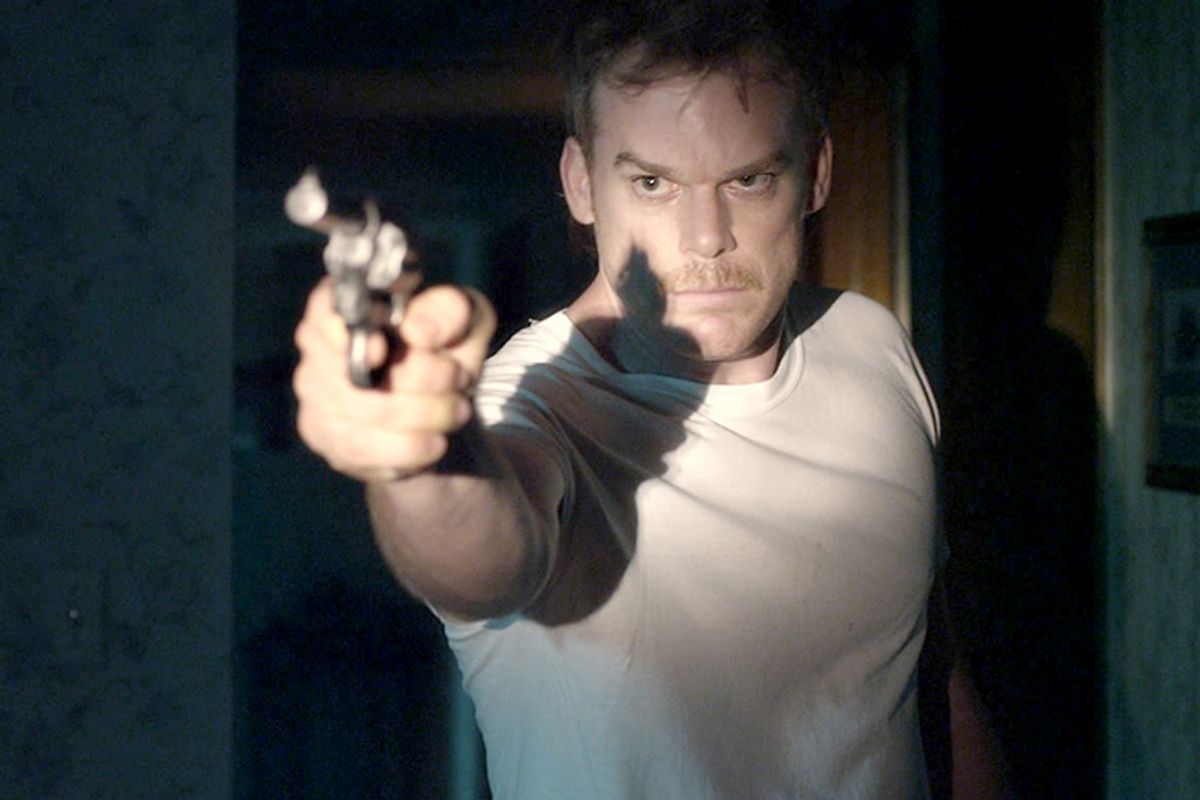 PARK CITY, Utah — The biblical adage that the sins of the father shall be visited on the son gets quite a workout in Jim Mickle’s bloody, brooding action-thriller “Cold in July,” which premiered here at Sundance to a rousing response on Tuesday. Mickle then came out and told the crowd in the Eccles Center something that helped me make sense of this fast-rising genre filmmaker’s career. Someone asked about the electronic score to this East Texas tale of father-son vengeance, and Mickle replied that it was a tribute to the classic soundtracks of genre-movie legend John Carpenter, who often wrote his own music. That cleared it all up: Mickle is the new Carpenter, and if you’re into that kind of thing and haven’t heard about him, you soon will.

Mickle made one of the most vigorous and unjaded of all recent vampire-zombie movies, “Stake Land,” and hardly anyone noticed. Then he made the American version of the Mexican cannibal movie “We Are What We Are,” transforming the flesh-eaters into a hidden Christian cult in the backcountry of upstate New York. People started to notice that one; it was a thoroughgoing reinvention of the original movie, with a distinctively haunted American atmosphere, and not just a remake. “Cold in July,” which was adapted by Mickle and his writing partner Nick Damici from a late-‘80s crime novel by Joe R. Lansdale, ought to complete the process of getting him noticed. While walking away from the theater, I overheard a producer-type on her phone back to New York or L.A., holding an impromptu meeting whose subject was: How do we get this guy to make our next movie?

Built around nifty yin-yang paired performances by Michael C. Hall and Sam Shepard, along with a huge comic-relief assist from Don Johnson and his fire-engine red Caddy, “Cold in July” is tense, gripping, gruesome, often hilarious, brilliantly engineered and highly satisfying. Its atmosphere is so compelling that one is tempted to haul out clichés about cutting the East Texas heat with a knife, when in fact this movie, like Mickle’s earlier features, was made in New York. (The central portion of the Empire State has a near-Appalachian quality that can pass for many other humid-climate locations.) Hall, who just completed several years as a serial killer on “Dexter,” plays an unexceptional everyman here, albeit one who gets unexpectedly dragged into a nightmarish criminal underworld. His character, Richard, runs a frame shop on a small town’s main street, circa 1989, and has never had a run-in with the law until the night he shoots a burglar in his family’s home. The shooting is accidental and Richard feels terrible, but the local sheriff (co-writer Damici) assures him it’s no big deal. This is gun-crazy Texas, after all, and the dude was in his house. Clear-cut self-defense, case closed. Right?

Well, no. First there’s the dead guy’s scary dad, Russel (Shepard, at his creaky, ominous best), who shows up straight out of prison, looking for revenge and trailing creepy omens through Richard’s house: Bullets dropped like breadcrumbs through his kid’s bedroom; a teddy bear with one eye gouged out. But the sheriff convinces Richard and his goody-two-shoes wife (Vinessa Shaw, in a series of fabulously awful outfits) to serve as bait to bring in Russel, launching a terrifying cat-and-mouse game that appears to end well. Then Richard makes an accidental discovery that casts doubt on every so-called fact of the story to this point, launching a delirious thrill-ride that includes him saving Russel from a horrible death and then kidnapping him, and the two of them taking an increasingly violent road trip to Houston in the company of a private eye called Jim Bob Luke, delightfully underplayed by Don Johnson in a grim demeanor and outrageous cowboy fashions.

There are certainly moments in “Cold in July” where I reflected that the story had left plausible reality far behind. Or, to be more specific, that the characters were still convincing even as their situation had become totally ridiculous. But one could say the same about virtually every Carpenter film — and what matters most in this kind of movie is whether you want to take the ride, not whether you think real people would be likely to do these dreadful things. This unlikely trio of characters is so finely balanced and so seductive that we keep rooting for them even as they mutate into vigilante video-game heroes taking on a heavily armed nest of bad guys in an apocalyptic showdown.

Mickle understands the psychological, spiritual and even erotic appeal of a violent and damaged character like Shepard’s brooding, haunted Russel, and sees that Richard is drawn to the older man — the father of a long-missing boy who is now a man around Richard’s age — for reasons he can’t control. “Cold in July” plays by thriller rules and teaches its lessons according to thriller morality, which decrees that bad things happen because we secretly want them to. But this thriller, which could easily have been routine straight-to-VOD garbage in another director’s hands, has a powerful undertow that makes it seem more profound than that, more observant of essential patterns in human nature. Is that an illusion? Maybe so, but Jim Mickle isn’t — this dude can make movies.