Right-wing nationalism vs. 1 percent oligarchy: In the war between Bannon and Kushner, Trump agrees with both

On one hand an apocalyptic, authoritarian worldview; on the other, permanent rule by the rich. Trump wants both! 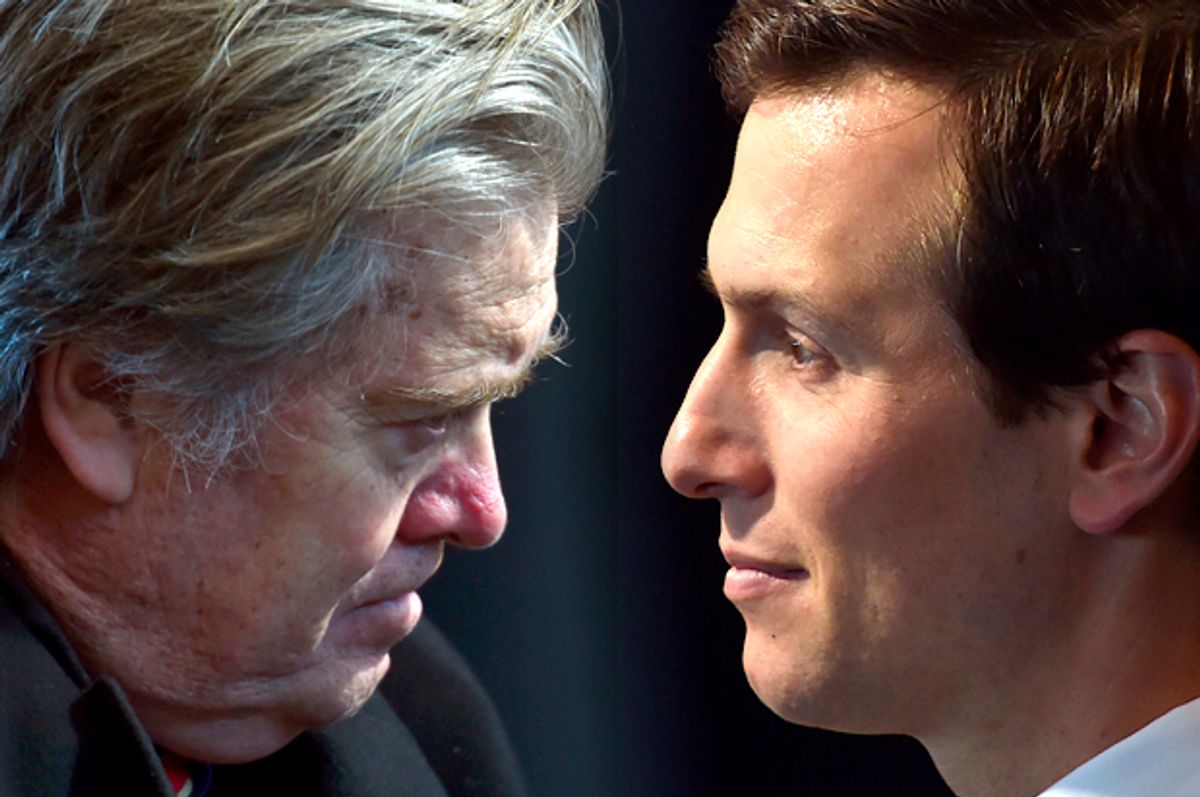 Right after Mitt Romney lost the presidential election in 2012, Donald Trump copyrighted the slogan "Make America great again" and began plotting his run for the White House. He had flirted with the idea for years, going all the way back to the 1980s. In 2000 he did a little barnstorming before he decided to take a pass. And most of us recall the ill-fated "birther" campaign that was supposed to launch him into the 2012 race but ended in humiliation at the hands of then President Barack Obama at the White House Correspondents' Dinner. Each time he talked about running, the theme was restoring the United States to its former glory.

Trump may not know much, but he has known for decades that America is going to hell in a handbasket. Back in the 1980s it was wily Japan that was relegating us to Third World status and today it's China and Mexico. He has also always known that America is riddled with out-of-control crime committed by black and brown "bad guys," and that we must "bring back the death penalty" and "bring back the police" so we can have law and order once again. He's always believed that America must have the biggest, strongest military on earth, although he's wavered minute by minute on when and how it ought to be used.

As I wrote during the 2016 campaign, Trump's image of America is the New York City mean streets of the 1970s and '80s and he has not evolved at all since then. I mention this because it's important to recognize that Trump really does have a worldview of his own and has held it for a long time. As intellectually incoherent as he is about virtually everything, his fundamental philosophy is that America should return to the period in which he grew up, the 1950s — a time when "our police" were free to intimidate and terrorize racial minorities and the U.S. dominated the planet economically and militarily because it was the only industrial power left standing after World War II.

In order to recapture that moment in time it will take another worldwide conflagration. That leads us to Trump's strategic adviser Steve Bannon, the apocalyptic media mogul who also thinks we're on the verge of collapse and sees this as an opportunity. The New York Times published a story this past weekend about Bannon's obsession with the 1997 book "The Fourth Turning," a half-baked theory of political history that says everything happens in 80-year increments. We're about to have a massive meltdown, Bannon thinks, after which the U.S. would presumably once again be on top and Donald Trump would be young again.

In the interview, Mr. Bannon rattled off a list of White House policies that he said fit with the larger goal of strengthening the country for whatever calamity might await just over the horizon. They included starting the process of building a wall on the southern border, barring foreigners from seven predominantly Muslim nations, and taking steps that he said were meant “to empower the secretary of defense, the C.I.A. to step up the war” against radical Islam.

“I think it’s very simple: You’ve got to take care of the country,” Mr. Bannon said.

Bannon didn't say we need to empower the police to enforce law and order but it stands to reason that would be part of the package.

He did concede that if the country were to adopt his authoritarian nationalist strategy it might one day "reclaim" its position as the guarantor of global security. It's just that right now we need to blow everything up.

Neil Howe, one of the authors of "The Fourth Turning" (with William Strauss) told the Times:

There has to be a period in which we tear down everything that is no longer functional. And if we don’t do that, it’s hard to ever renew anything. Forests need fires, and rivers need floods. These happen for a reason.

Trump knows nothing about this book obviously, although Bannon may have tried to talk to him about it. But you can see how well this theory fits with his own vision. What Bannon sees as renewal, Trump thinks of as restoration. But they're the same thing.

Yet Trump is in over his head so deep as president, that the grand vision is taking a backseat to sheer survival. For that, he needs something more than lofty ideas and populist rhetoric and he's turning to the one thing he's always had in his corner: family. His son-in-law Jared Kushner and daughter Ivanka are his closest advisers and as he starts to go under, he's depending on them more and more to keep him afloat. Kushner is turning to people like Gary Cohn, the economic adviser from Goldman Sachs whose prime directive is to do the opposite of Bannon -- keep the party going. The .001 percent has never done better, and nobody benefits more from that than Jared and Ivanka, for whom America is already as great as it can be.

Bannon was booted from his spot on the National Security Council last week and several media outlets reported that he threatened to quit his White House pot over it. (Bannon has denied this.) He's obviously jealous of Kushner, whose shiny new Office of Innovation has usurped Bannon's moribund Strategic Initiatives Group. The friction has made its way into the media, and Trump told the two men to "work it out." Apparently they have mended fences, at least for now.

The truth is that both of them reflect Trump's vision. The president shares Bannon's idea that the country is collapsing and can only be saved with toughness, strength and power. In Jared and Ivanka, Trump sees a golden future for his progeny, building the family wealth and securing his legacy. That's the Trump worldview, perfectly embodied in his two top advisers.