America is suffering from a plague of deadly, unaccountable and racist police violence

A year after Alton Sterling and Philando Castile's deaths, the state of police violence in the U.S. remains bleak 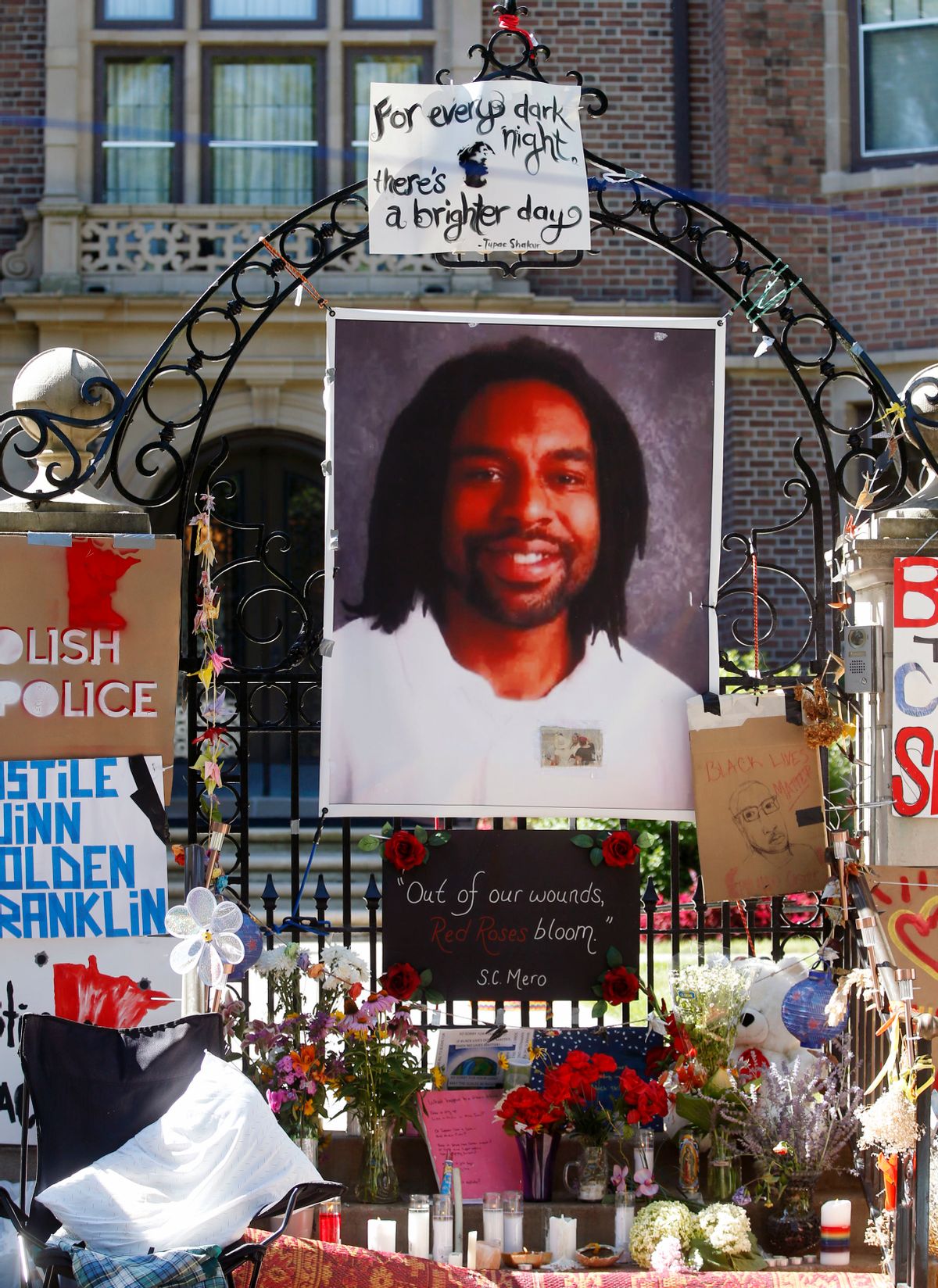 FILE - In this July 25, 2016, file photo, a memorial including a photo of Philando Castile adorns the gate to the governor's residence where protesters continue to demonstrate in St. Paul, Minn., against the July 6, 2016, shooting death of Castile by St. Anthony police Officer Jeronimo Yanez during a traffic stop in Falcon Heights, Minn. Yanez is expected to enter his plea on manslaughter charges during a hearing Monday, Feb. 27, 2017. (AP Photo/Jim Mone, File) (AP)
--

A year ago on July 5, Alton Sterling was wrestled to the ground by two police officers. Moments later, he was shot and killed. The next day, Philando Castile was fatally shot by Officer Jeronimo Yanez during a traffic stop. His death was witnessed by his girlfriend Diamond Reynolds and her young daughter, and its aftermath live streamed to Facebook by Reynolds.

In the year since Sterling and Castile’s deaths sparked Black Lives Matter protests across the country and a national conversation on police violence and racism, 1,006 more civilians have met similar fates at the hands of police officers. A national election ended with Donald Trump, whose campaign largely centered around fear-mongering and promises to restore law and order, being elected the country’s 45th president. Jeff Sessions, who was once denied a federal judgeship because he was deemed too racist, became the head of the Department of Justice.

While the death of these two black men prompted many people across the country to demand greater accountability for the actions of police officers, their power to use excessive force against civilians remains largely unchecked without any added oversight. In fact, Trump’s election and his nomination of Sessions to the Justice Department offer even more credence to police officers’ power, as both men have been openly supportive of furthering police powers.

The state of police violence and police accountability remains bleak and the fight for justice continues to be hindered.

Pursuit of Justice for Castile and Sterling

Baton Rouge officers Blane Salamoni and Howie Lake II were the two officers who confronted Alton Sterling outside a convenience store. A federal investigation into the incident found that the entire confrontation lasted a mere 90 seconds, in which the officers wrestled Sterling to the ground, tased him and then shot him a total of six times. The Justice Department announced in May that it would not be pursuing any charges against Salamoni and Lake, who are currently on paid leave. An investigation by the Louisiana attorney general’s office is looking into whether the two officers, who are both white, should be charged on state laws.

Officer Jeronimo Yanez was charged with second-degree manslaughter last fall for shooting and killing Castile during a traffic stop. His trial began in early June, and after about two weeks, the majority-white jury acquitted him of all charges. Yanez testified in the trial that he had “feared for his life” because he had smelled marijuana inside of Castile’s car. The city of St. Anthony police department has since fired Yanez from the force.

Earlier this week, the Minnesota Star Tribune reported that the judge who presided over the Yanez trial, William H. Leary III, wrote a letter of support to the jurors who acquitted Yanez. Citing the widespread criticism on the jury’s decision, Leary called the outcry over the verdict “a failure to understand what you were asked to do.”

While Leary did not give his opinion on the outcome of the case, he wrote that the jury’s decision “was fully supported by a fair interpretation of the evidence and the law you were obligated to apply.”

Two other police officers have also avoided legal punishment for killing black men. Dominique Heaggan-Brown was acquitted of all charges for fatally shooting Sylville Smith during a foot chase, and the trial of former University of Cincinnati officer Raymond Tensing, who killed Samuel DuBose in his car, ended in a mistrial.

A number of bills in state legislatures are poised to expand police powers. Thirty-two so-called Blue Lives Matter bills have been introduced in 14 states so far, according to the Huffington Post. These bills intend to make police a protected class similar to racial minorities and would classify attacks against police as hate crimes.

However, these Blue Lives Matter bills are unnecessary and redundant, as all 50 states already have statutes that automatically increase penalties for violent attacks against law enforcement, according to the Anti-Defamation League. These statutes do not require prosecutors to prove motive. Mark Potok, a senior fellow at the Southern Poverty Law Center, told the Huffington Post that murdering a police officer could likely mean a death sentence in some states.

“So the truth is that including police in hate crime laws is merely a political statement, and an unnecessary one at that,” he told the Huffington Post.

According to the Huffington Post’s tracking of these proposed bills, at least 20 bills introduced in the past year have lost traction and either died via vote or the end of the congressional session. Twenty-two bills are being reviewed by committee and awaiting a vote. States that have passed Blue Lives Matter bills include Louisiana, the first state to pass such a bill, Mississippi and Kentucky.

Other bills have been passed in New Jersey and Texas requiring schools to teach students how to properly interact with police. The New Jersey bill passed in the Assembly 76-0 on June 22 stipulates that starting in kindergarten and up to 12th grade, school districts must teach kids how to talk to law enforcement as part of their social studies curriculum. A later amendment added to the original bill mandates that students be taught about the rights they have when interacting with police officers. The Department of Education would also be required to work with an advisory committee — which includes the many groups that are already part of the Newark’s Civilian Complaint Review Board—to create the curriculum. If passed, the program would be implemented starting in 2018.

The bill’s primary sponsor, New Jersey Assemblywoman Sheila Oliver, defended the bill by saying it would prepare students for possible future encounters with police and could help rebuild trust between police forces and the communities they serve.

"This is a lesson many parents already teach to their children," Oliver told NBC News. "Making it part of the school curriculum is the next logical step."

Several activists have taken issue with this type of legislation, arguing that it places the onus on the student to act politely and correctly when interacting with officers, while not holding officers responsible for their actions.

"Placing the onus on individuals, whether it be students or drivers, to take responsibility for their safety during police interactions is, frankly, ridiculous,” Portia Allen-Kyle, the Pratt Criminal Justice Transparency fellow at the American Civil Liberties Union, told NBC News.

A number of bills have also gained traction in several states criminalizing protests and imposing harsher punishments on protesters. Seventeen states are currently considering this type of legislation, according to the database project Our States. In North Dakota, which saw large waves of protests against the Dakota Access Pipeline last year, a bill was recently passed and signed making protest penalties a class B felony if 100 or more people are involved, and carrying a maximum prison sentence of 10 years. Another bill that was passed imposes penalties on protesters who wear masks, as Occupy demonstrators often do.

While a bevy of bills seek to increase police power at the expense of the rights of civilians, Our States counts 32 states considering legislation that would address police violence. Two bills introduced in the California legislature would restrict police involvement in schools, prevent police from enforcing low-level offenses and require police to undergo procedural justice and implicit bias training.

A series of bills passed in the Republican-controlled Texas legislature would mandate de-escalation training for law enforcement, prevent police departments from receiving state grants if they do not comply with reporting requirements for shootings involving police, establish a grant program to fund rapid response teams to handle mental health emergencies, and require independent investigation of deaths in custody.

Legislation signed into law in Louisiana would strengthen police training requirements and make it easier for officers who commit misconduct to lose their certification. Another house bill that was passed in the state would establish a statewide police misconduct database to prevent officers who are fired or who resign from a misconduct investigation from being rehired. A fourth bill would reduce the amount of time before police can be questioned after an incident from 30 to 14 days.

Law enforcement now has strong allies in the White House via Trump and Attorney General Jeff Sessions. Throughout his presidential campaign, Trump repeatedly promised to restore “law and order" while criticizing what he characterized as a “war on police” perpetrated by Black Lives Matter activists.

Just after Trump’s inauguration, the White House published six issue statements on its website, one of which was titled Standing Up For Our Law Enforcement Community. The statement unabashedly throws full support behind law enforcement and promises that the Trump administration will “empower our law enforcement officers to do their jobs and keep our streets free of crime and violence.”

“The dangerous anti-police atmosphere in America is wrong,” the statement reads. “The Trump Administration will end it.”

Speaking at the 36th Annual National Peace Officers’ Memorial Service on May 15, Trump said police officers are subject to “unfair defamation and vilification” that has increased the dangers of the job. Trump also promised his administration would provide more federal resources for local police departments.

“You are the thin blue line between civilization and chaos,” Trump said. “Because you don't hear it nearly enough, I want you to know that patriotic Americans of all backgrounds truly support and love our police. The very sad thing is that today many politicians don't want to say that, they don't want to talk about that, because it's not politically correct, and they think it might hurt them with voters. I will say it, and I will talk about it proudly.”

Like Trump, Sessions is decidedly uninterested in police reform. According to reporting from ProPublica, the Department of Justice under Sessions has begun to roll back the use of consent decrees, court-enforced agreements to protect civil rights. Among its functions, consent decrees in the past have often been used as a tool to reform troubled police departments.

One of the local law enforcement forces under a consent decree is the Seattle Police Department. The consent decree originated from a federal investigation in 2011 into the department’s use-of-force policies and bias among officers. The department is in its fifth year with the consent decree, but the fatal shooting last month of Charleena Lyles — a 30-year-old mentally ill black woman — by Seattle police officers, shows the department has further improvement to make.

In an interview on Politico’s Off Message podcast, Seattle Mayor Ed Murray said the city would continue to follow the consent decree regardless of whether the Justice Department pulls out of Seattle.

“The issue of race and policing has not gone away,” Murray said. “For this Justice Department to back out of those and no longer offer cities tools to get police and those communities of color in a better place, I think is very dangerous.”