Why cities should stop fighting big banks and create their own 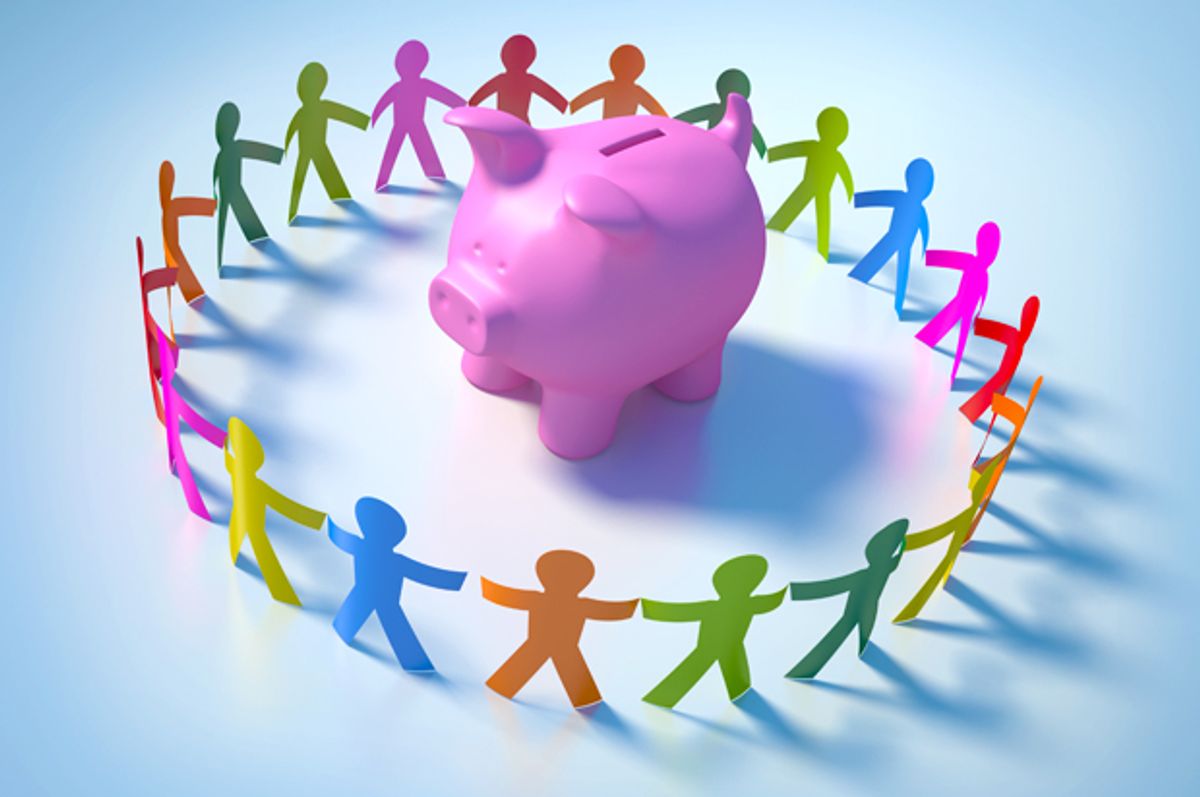 Six years have passed since Occupy Wall Street called attention to one of the most vexing problems of our time: an abstract financial system that concentrates prosperity at the top, produces massive inequality and drowns working people in unpayable debts. It is worth noting that some of the largest Occupy encampments occurred in some of the most liberal cities: New York, Oakland, Los Angeles, Boston and Chicago among them. Indeed, it is difficult to reconcile how progressive leadership has been unable to address myriad social problems, income inequality chief among them. Case in point: In San Francisco, home district of Nancy Pelosi, the top 1 percent of earners take home 30.8 percent of the total income in the region. Almost every major coastal city is dealing with some mix of rapid growth, a housing affordability crisis, the displacement of poor residents and overburdened public infrastructure. The failure of progressive strongholds to address the problems liberals routinely decry is an indictment of the Democrats, their priorities, and their moral imagination when it comes to improving the material conditions for their supporters.

How do we confront these social challenges? Generally, that sort of thing costs money — which cities can raise via bonds, or through raising new taxes. Both of these have their problems: Municipal bonds make cities heavily reliant on wealthy individual investors and Wall Street; banks profit at the expense of taxpayers and are highly unlikely to finance public goods that do not provide the highest returns — which is why it's so hard to build affordable housing. Moreover, institutional racism plays an insidious role in city’s ability to raise bonds: notably, Moody’s downgraded Ferguson’s municipal bond rating in 2015, citing “[a] rapid deterioration of the city's financial position” and “[Ferguson residents’] below average socioeconomic profile,” among other reasons. Relying on private creditors seems like a bum deal.

What about taxes? City sales tax is one option, but it’s a regressive tax: poorer residents bear more of the burden relative to wealthy earners. Raising new taxes on top earners is a more attractive option for progressive cities. Seattle’s City Council recently passed a 2.25 percent tax increase on individual earners above $250,000, but a legal challenge is already underway. The reality is that states retain more taxing authority than cities.

If cities want to promote financial inclusion, shared prosperity and sustainable growth, taxes and bonds alone may not get them very far. Consequently, some Occupy-inspired progressives have turned to monetary policy: Instead of fighting big banks, cities should create their own.

More bank for your buck

A municipal bank is a city-licensed public bank that operates much the same way private banks do: providing regular checking and savings accounts, and making loans to promote policy objectives like affordable housing. There are a lot of ways one might do this: a city can create the bank (as a line-item appropriation) in a mayor’s budget; through an ordinance passed by a city council; or if the citizens vote for it.

Arguably the biggest benefit of municipal banks is that, unlike Wall Street, their priorities are in the community, not in profit. Indeed, municipal banks are one of the best ways to ensure a bank serves local interests and prioritizes community needs. Cities can hardwire economic and social equity goals into the charter of a municipal bank, which makes it a useful tool for ensuring a city serves its most vulnerable residents. People in need are often the most susceptible to budget cuts, so it’s valuable to have a public institution catered specifically to low-income residents.

Karl Beitel, director of the Public Banking Project, describes how municipal banks can play a significant role in creating affordable housing supply. By partnering with credit unions and community development financial institutions, municipal banks can be a major source of funding for city property acquisitions, which can be used to take housing off the private market to be converted into affordable housing. Municipal banks can also coordinate investment from public-sector unions, non-profits and socially responsible investment funds to support additional acquisitions and development.

Municipal banks can offer more competitive interest rates for student borrowers and lower-cost financing of public works. Rather than paying massive interest rates on bonds to individual financiers and banks, municipalities can issue their own loans — meaning the interest payments that would otherwise go to Bank of America or Wells Fargo can instead be reinvested in the city. Municipal banks have the added benefit of being more publicly accountable. Seattle City Council recently voted to cut ties with Wells Fargo over its role in financing the Dakota Access Pipeline. A city can narrowly define the scope of a municipal bank’s charter to make ethical investments that further the city’s policy goals.

Frack-happy, Trump-supporting North Dakota probably isn’t the first place you would expect to find a working model, but since 1919, the state has used the Bank of North Dakota to finance everything from student loans to sewer upgrades and small business loans. The bank just posted its thirteenth consecutive year of record profits, earning more than $136 million in 2016. And unlike at a big private bank, that money goes right back into investing in the people, rather than into investors’ pockets.

Bob Hasegawa, a Washington State Senator, recently ran a mayoral campaign in Seattle that featured municipal banks at the core of his platform; he was clearly inspired by the Bank of North Dakota’s success, observing that “the size of North Dakota and its annual operating budget are almost equal to that of Seattle.” He isn’t the only one taking notice of the bank’s solid fiscal position and growth. Los Angeles, San Francisco and Santa Fe are also seriously considering proposals to establish municipal banks for wide-ranging priorities from building affordable housing to providing cannabis retail stores with a safe place to make deposits.

Still, major obstacles impede the path the municipal banks. Cities have to go through some rigamarole to approve the bank, meet capital requirements, provide oversight, and overcome other regulatory hurdles. The benefits may not outweigh the political difficulties of creating. As David Goldstein, a senior fellow at Civic Ventures in Seattle argues, “municipal banks must face the challenge of balancing wise lending with political pressure. So while [municipal banks] could play a limited role in lending to ‘affordable’ housing projects and small businesses, it is far from an economic panacea.” He also notes that a municipal bank in Seattle may not be legal without supporting legislation from the state.

Washington’s constitution does pose some challenges concerning the establishment of a municipal bank, though Beitel thinks “there are contradictions in the regulatory code” and a good attorney could find an interpretation of the law that paves a way for state or municipal banks. Nonetheless, many states have a long record of preempting local legislation in liberal cities that are politically at odds with their conservative state legislatures. That’s why it’s preferable to start with a state-owned bank like North Dakota’s, which if properly constructed, could incorporate counties and cities that want to participate.

For now, Beitel thinks public banking advocates “should start where it’s most feasible, [most likely at the municipal level] in places like Los Angeles, San Francisco or Seattle, then ramp up.” Likewise, while Goldstein is skeptical municipal banks can make a huge dent in our current social problems, he admits “it would be a great tool to have, among many.”

Similarly, Beitel is more inclined to look toward tax policy for social investments, rather than a public bank, but he doesn’t think it has to be either/or. Beitel sees municipal banks as one piece of a broader “progressive public policy agenda that can address multiple needs simultaneously.” While the frenetic energy of Occupy Wall Street has faded, maybe it’s time to focus on the more mundane task of building a financial system that reignites the movement’s spirit.