Not in our name

Eager to please his ravenous base, Trump requires that those who take a knee respect the flag he wouldn't fight for 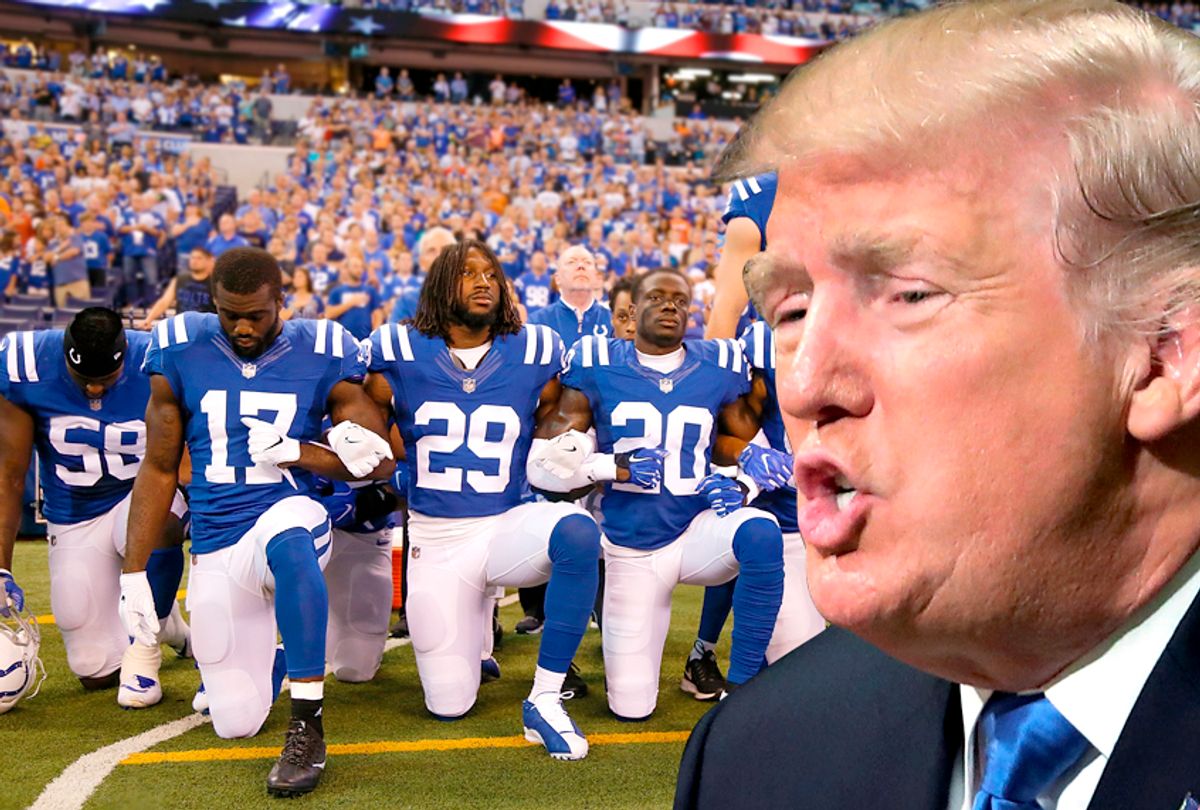 Few people grow up with more exposure to and respect for the American flag than military brats — the children of people serving in the Army, Navy, Air Force, Marines and Coast Guard. Growing up in the Army, I remember hearing the distinctive BOOM of the cannon as the flag was raised at reveille and lowered at retreat in the evening, accompanied by a bugler playing “To the Colors.” Everyone on the post was expected to cease whatever they were doing upon hearing the cannon and bugle call. Little league games came to a halt. People stopped jogging, or working in the garden. People walking from the commissary to their cars carrying bags of groceries stopped. If they were close enough to hear the cannon, people driving their cars stopped and got out. We stood facing the flag — we all knew what direction to turn to face the flag on the post — and placed our hands over our hearts. Officers and noncoms and enlisted soldiers saluted. Civilians were not expected to join in this military tradition, but many did.

Stopping at reveille and retreat was expected of you, but it wasn’t required. I don’t recall ever seeing anyone corrected by the MP’s for failing to stop and face the flag at retreat. Facing the flag with your hand over your heart wasn’t done because of a law. It was done out of respect. And if the United States military could treat respect for the flag that way on Army posts like Fort Leavenworth in Kansas, or Air Force bases like Bergstrom Airbase in Texas, or at Naval installations like Norfolk Naval Station in Virginia, or at Marine bases like Camp Pendleton in California, then it should sure as hell be good enough for the National Football League at its zillion dollar stadiums around the country, and good enough for our so-called commander in chief — who managed to corral five draft deferments and wrangled a 4-F judgement for “bone spurs” on his heels — when he showed his respect for the flag by avoiding service during the war in Vietnam.

Respect can’t be required. By its nature, it has to be earned. You don’t stand up with your hand over your heart to show respect for the American flag because it’s a piece of red, white and blue cloth. You show respect for what the flag stands for. It stands for us. It stands for the United States of America. The flag stands for what is done in our name. When you lose respect for what’s done in our name, you ought to be able to show that disrespect by refusing to stand. By refusing to place your hand over your heart. By refusing, in effect, to salute the symbol of what we stand for because you don’t stand for it anymore.

That’s exactly what Colin Kaepernick did back in 2016 the first time he didn’t stand for the showing of the colors and playing of the National Anthem before an NFL football game. He told a reporter, Steve Wyche, that he couldn’t stand and salute a flag that stood for a country where police brutality against young African American men was tolerated, if not condoned. He did this not long after the killings of Alton Sterling in Louisiana and Philando Castile in Minnesota. Coming on the heels of the police killings of Sandra Bland and Freddie Gray in 2015, and the killings of 12-year-old Tamir Rice, Michael Brown and Eric Garner in 2014, Kaepernick’s very public protest could hardly have been surprising. There had been street protests around the country against every single police killing. I guess what made Kaepernick’s different was that the protests hadn’t interrupted people’s Sunday afternoon Buffalo chicken wing gobbling over at the local sports bar, or Barcalounger beer-swilling down in the man cave.

A few months after Kaepernick took a knee during the National Anthem, a study published by the Journal of American Health showed that black men were three times more likely to be killed “by legal intervention” than white men. Latino men were nearly twice as likely to be killed in the same circumstance. So Kaepernick wasn’t protesting a few cop killings of black men. He wasn’t protesting a trend. He was protesting an extraordinary, disgusting fact about this country. According to data collected by the Washington Post and The Guardian and analyzed by the Huffington Post, 223 black Americans were killed by police in the year after Kaepernick first began his protest. The number could be higher, because the race of the victim in police shootings has not been confirmed in 160 more killings, according to the Post.

What’s easy to forget, or to ignore altogether, is that every one of these killings was done in our name. And not only in our name, but under our flag. It’s common for police departments to make wearing an American flag part of the police uniform, usually as a shoulder patch. Every soldier, sailor and airman I came across in Iraq and Afghanistan was wearing an American flag shoulder patch. So a lot of killing that we might not approve of is being done in our name and under our flag. Kaepernick just chose to point that out by refusing to stand for the flag during the playing of the national anthem during football games last year.

His protest has been joined by a whole lot of other NFL players this year. That fact caught the attention of the president of the United States, who decided to take the time out of his busy schedule this week to make his displeasure apparent. A week after Hurricane Maria slammed into Puerto Rico, leveling houses, flooding whole towns, flattening thousands of acres of crops, and knocking out power to the entire island’s population of 3.4 million, and two weeks after Hurricane Irma caused similar if not worse damage to the U.S. Virgin Islands, inflicted extraordinary flooding and wind damage on Florida and left 75 dead, and three weeks after Hurricane Harvey dumped torrential rains flooding southern Texas and Louisiana leaving hundreds of thousands homeless and without power, our president unleashed no less than 22 tweets critical of protests by NFL players and coaches over the weekend. He devoted exactly five tweets to the plight of Puerto Rico, three of which were snarkily dismissive of the island’s infrastructure and limping economy.

His base may be gobbling up the red meat he’s dishing out with his obviously racist tweets against NFL players, but the rest of the country isn’t. A recent Washington Post/ABC News poll showed that 66 percent of the country believes that Trump has done more to divide the country than unite it, which is just the way he wants it. Trump seems to be making a calculated bet. By conflating the NFL protests with disrespect for the flag rather than the statement against racism and police violence against blacks, Trump appears to be stoking the fires of the culture war in an attempt to shore up his base. After languishing in the mid 30’s for months, Trump got his first bump last week with two polls putting his approval rating at 42 percent, with his disapproval around 55 percent. But he’s been up in the polls before.

But that’s the thing about red meat: if you leave it out too long, it spoils.