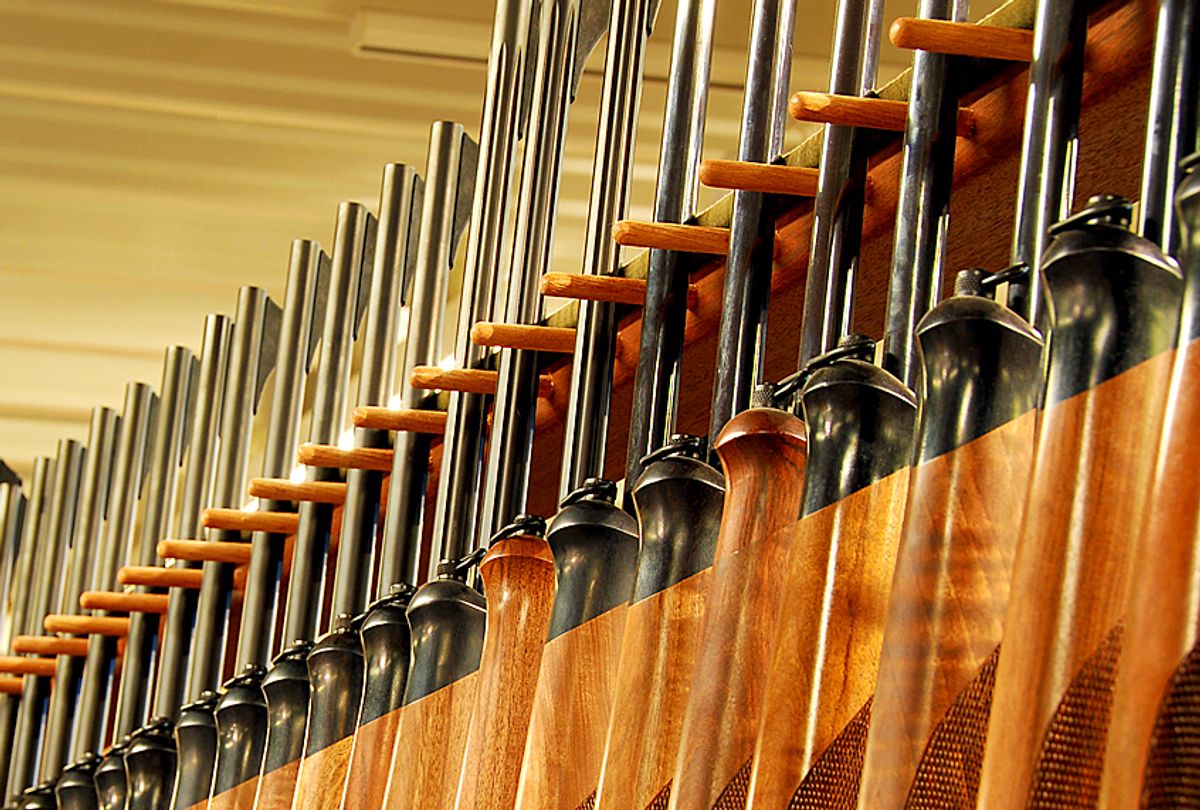 Most journalists who cover gun violence could have predicted this, but it doesn't make it any less sickening: As soon as it was revealed that Stephen Paddock, the Las Vegas mass shooter who killed 59 people and injured more than 500 others more, had used a bump-fire stock to modify his semiautomatic rifles into simulated machine guns, sales of the device soared. Both The Trace and the New York Times found that the item was sold out everywhere. The company that makes this delightful innovation, Slide Fire, initially reported the device was out of stock, and now seems to be so overwhelmed by demand it has stopped taking back orders.

It's a grim reminder of one major reason the National Rifle Association and the gun industry work so hard to derail any efforts to prevent mass shootings: They're good for business.

I've written a variation of this argument a number of times, but as wearisome as that is, what is more wearisome is the repetitive nature of our mass shooting epidemic. But the role that the bump-fire stock played in the body count of this latest shooting at least adds a novel wrinkle to the story: It's more evidence that mass shootings function as advertising for the gun industry. While most of us are fixated on the people screaming, running, hiding or dying, there's a minority faction of the population that is awed by the power of the weapons on display — awed enough to want to buy one of their own.

There are other explanations, of course, for the surge of gun sales after a mass shooting. The most persuasive is the fear that the firearms used in such a gruesome event will soon be subject to restrictions, so there's a rush to buy them before they are no longer available. No doubt that fuels some of the sales, as evidenced by similar gun sales spikes when Democrats take office and cause similar concerns about regulation.

But let's face it. We've all gone through this cycle over and over again. At this point, surely even the most paranoid gun nuts must know that there's no number of dead bodies in the street that will compel Republicans to do anything about the problem.

True, some Republicans have cautiously signed on to banning bump-fire stocks, and even the NRA has signaled it may be open to a "review" of these devices. But that alone doesn't really explain the made rush to buy these things. Even the most ardent gun-humper can't pretend there's any pragmatic value in being able to spray automatic-style fire over a wide space. As C.J. Chivers of the New York Times said, the only reason people buy them is for the fun of getting to feel like you're firing a machine gun. (Or, I suppose, because you're planning a mass murder.)

So that's what is likely going on here: People saw those videos of the Las Vegas shooting, were deeply impressed by how rapid the gunfire was, figured it would be fun to have access to that kind of device, and rushed out to buy one. The possibility that it's going to get banned doesn't really change the equation. It's still a matter of people reacting to mass murder by going, "Hot damn, that is some high-powered weaponry. It would be so fun to shoot a gun like that!"

It fits into what we know generally about the way guns are marketed: With power fantasies, aided by extremely geeky levels of infatuation with hardware. As deeply as uncomfortable as it is to consider, mass shootings play off this marketing strategy. The mass shooter is almost always driven by power fantasies. Even if most gun lovers are not profoundly demented and disapprove of his actions on a conscious, moral level, they also appreciate the display of power. By buying their own guns, they can tap into the fantasy of having that kind of power.

To be clear, most gun owners leave it in the realm of fantasy. They buy the gun and show it off to their friends. They may tape themselves firing into an empty field and put it up on YouTube, enjoying the visceral pleasure of looking dominant and manly to the anonymous masses. No one here is claiming most gun lovers are murders in training. I doubt that many of them actually fantasize about shooting up crowds of innocents. It's just that if you are attracted to the power of guns, then mass shootings are still the most effective demonstration of the power you find so alluring. That clearly overrides any shame that firearms fanatics might otherwise feel about buying a gun or device because some deranged killer demonstrated its awesome killing power.

Nor should we be too surprised that the gun industry is A-OK with profiting off the inadvertent advertising of their products provided, free of charge, by mass murderers. As NYU's Dr. Cheryl Healton explained on Wednesday's Salon Talks, the tobacco industry knew for decades that it was profiting off addiction and cancer, and viciously attacked anyone who would called out its callous hypocrisy. It would be nice if we could expect corporations to put human lives before profits, but unfortunately, history tells us that doesn't often happen.