Donald Trump just lost his battle with NFL owners, but did he lose the war?

The NFL decided not to change its rules on the national anthem, and Trump once again equated it with "disrespect" 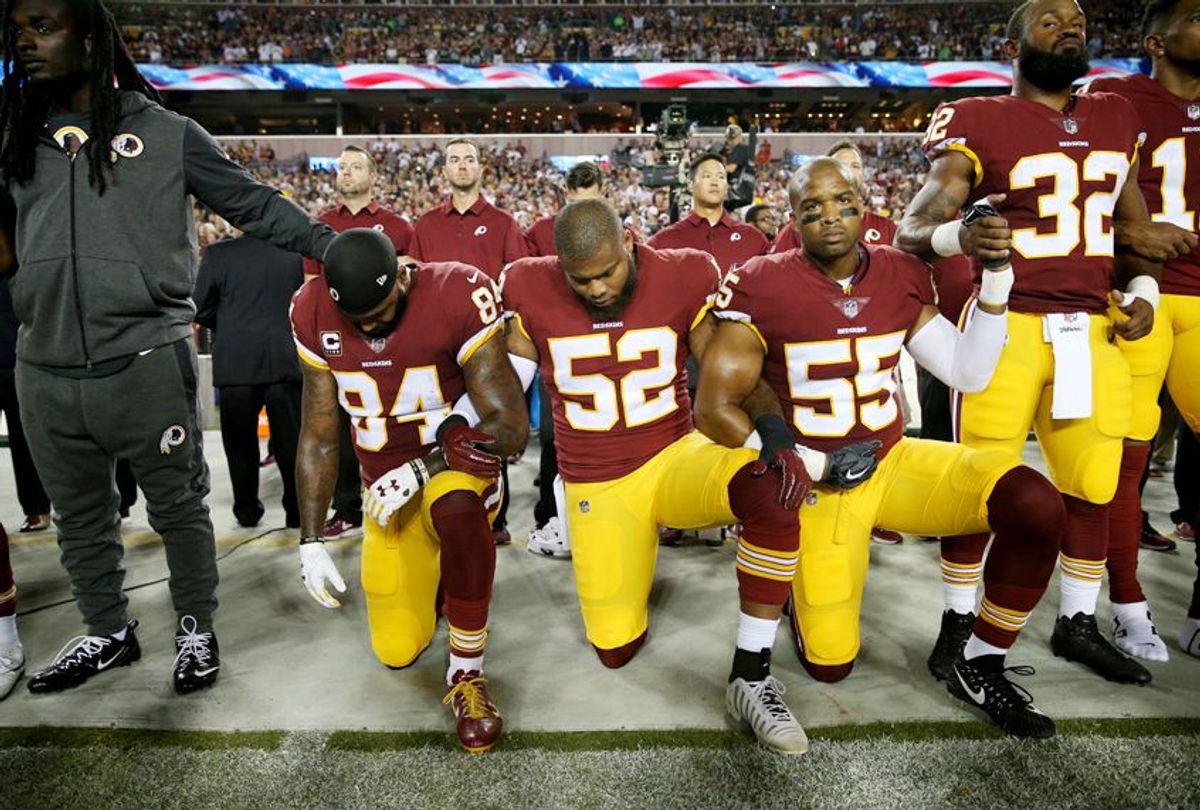 NFL players kneel during the the national anthem at FedExField on September 24, 2017. (Getty/Patrick Smith)
--

President Donald Trump's efforts to coerce the NFL into penalizing players who choose not to stand during the national anthem proved unsuccessful on Tuesday, following a meeting between league owners, union representatives and players.

Attended by the league's commissioner, Roger Goodell, the director of the players' union, DeMaurice Smith, 11 team owners and a dozen players, the meeting lasted roughly four hours as The New York Times reported. Noted league owners Robert Kraft of the New England Patriots and Arthur Blank of the Atlanta Falcons participated in the meeting.

Also there was Jerry Jones, the Dallas Cowboys owner who threatened to bench any player who did not stand for the anthem. Protestors met his arrival, though the Times and other sources did not report him as having any statements on the talks.

Players who have protested including, San Francisco 49er Eric Reid, Kenny Stills of the Miami Dolphins and Malcolm Jenkins of the Philadelphia Eagles also attended.

"We just talked about how the owners could come alongside us and we could, collectively, collaboratively, work together to actually create some change, real changes," Jenkins said, according to the Times. "We feel a real responsibility to our country, to our communities, so we’re working through ways to really have long lasting, real change."

Organizers asked Reid's former teammate, Colin Kaepernick, who began the series of demonstrations against police brutality toward African-Americans last year, to attend the meeting. He chose not to. Kaepernick recently filed a lawsuit against the NFL, alleging that team owners colluded to prevent him from playing in the league.

Talks between the parties will continue as regularly scheduled over the next two weeks. Owners did not seek a pledge from players to end their protests, but the league did "promise to help support some of the causes targeted by the protesting players, including reform of the criminal justice system," the Times reported.

"We spent today talking about the issues that our players have been trying to bring attention to. About issues in our communities to make our communities better," Goodell said, according to Reuters.

Upon hearing that the league has, for the moment, chosen not to penalize players for taking a knee, the president wasted no time in criticizing the league for not establishing a rule that would force players to stand. Trump once again equated the protest to an individual's testament of nationalism and respect for one's country.

"The NFL has decided that it will not force players to stand for the playing of our National Anthem. Total disrespect for our great country!" Trump tweeted on Wednesday morning.

The NFL has decided that it will not force players to stand for the playing of our National Anthem. Total disrespect for our great country!

Trump has  a more than checkered past when it comes respecting both patriotic traditions and U.S. service members, something that makes his tirades about the NFL, devout nationalism and militarism seem hollow. For example, he has talked through recitals of the national anthem at military and public events, misconstrued the traditional Navy playing of "Retreat" as a tribute to him and failed to stand for it as decorum demands.

As well, the president is currently locked into a feud with a Democratic Congresswoman who alleged he told the widow of a U.S. Army soldier killed in Niger that her husband "knew what he signed up for." He only made that call after mounting pressure and criticism tied to the fact that he had not acknowledged the sacrifice of that service member and the three others who died with him. Earlier this week, he attempted to shift the blame for his inaction onto former president Barack Obama. This comes in addition to his long-running battle with the Gold-Star family of the fallen U.S. Army officer and Bronze-Star recipient Humayun Khan.

So has Trump, who proves more ineffectual by the day, lost his stunt-filled, ongoing war with the NFL and its majority black players? It is true that, despite his regular howling, the president has not have been able to bully the league into changing their rules on the national anthem, nor do the owners — many of whom donated considerable sums to his campaign — seem cowed by the power of his bully pulpit or his sideways threats. In terms of sheer policy, he is losing this particular battle.

And, yet, it appears that Trump still maintains strong sway over the public on this issue. He has become the leader of a larger pool of critics and detractors — a pool that includes the majority of voters and most of his base. His dialogue informs their dialogue, as the more manic pronouncements from the fringe of that group inform his. In a broader sense regarding the culture wars around the protest, Trump is still on the battlefield and leading the charge. There's no real way to quantify his success there.