The face of the machine: The emotional toll of working in social media

Harassment, trauma, hair loss: Meet the people who work as social media managers and suffer behind the scenes 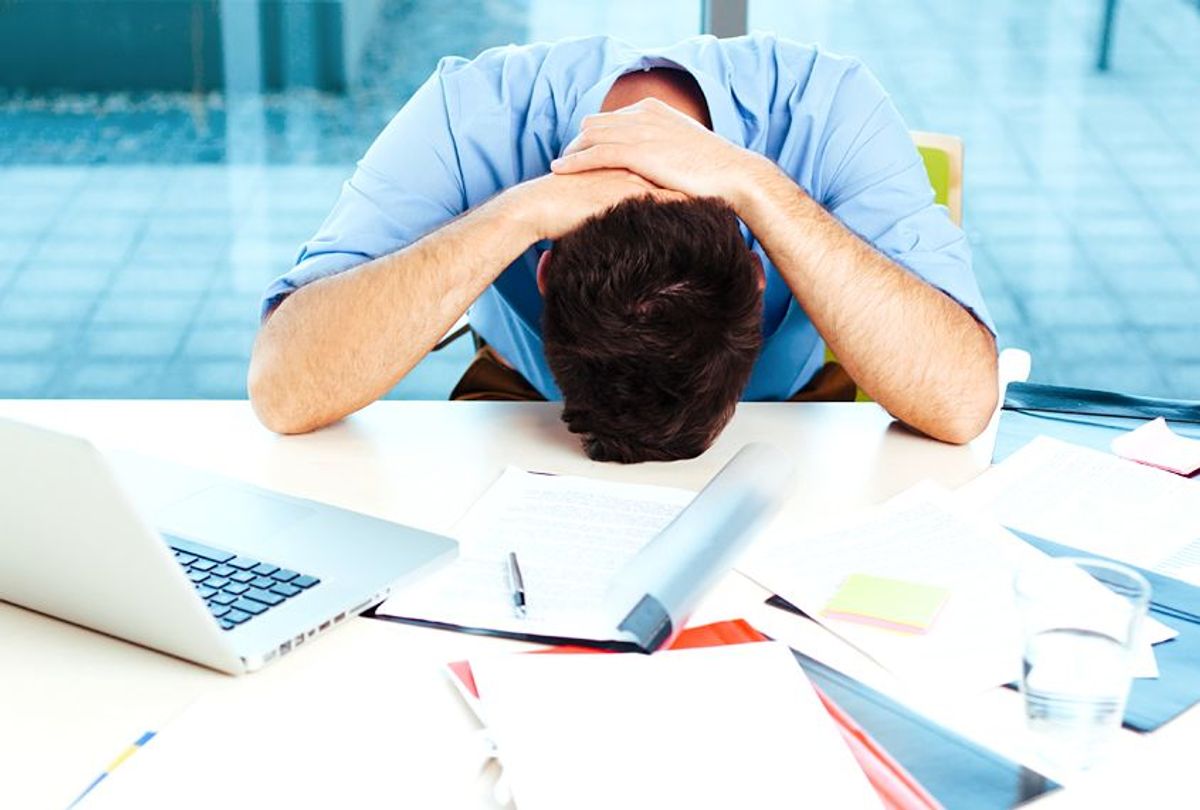 About once a week, with astonishing regularity, a major corporation makes a social media gaffe. Prominent snafus in the past year include the “Emoji Movie's” "Handmaid's Tale" mash-up tweet that seemed to imply its emoji were raped; a Dove soap GIF advertisement that “showed a black woman using the product and magically turning into a white woman,” as Salon’s D. Watkins wrote; a tweet sent from the official McDonald’s account that called Trump “a disgusting excuse for a president”; and IHOP retweeting a post that read, “Good morning to everyone except Americans who don’t want to accept the simple fact that Hillary had a major garbage campaign.”

These gaffes take different forms: some are simple employee error, tweeting from the wrong account, while others, like the Dove soap incident, are evidently part of marketing campaigns overseen by many that still somehow generate PR nightmares. Yet in all cases, there are professionals working behind the scenes to manage these PR disasters, mend the brand when something goes awry, and deal with the everyday wrath of the pseudonymous public. If you’ve ever been bullied online, you know how painful it can be; now think about how that would feel if you were running social media for a huge brand that everyone suddenly hated.

“Imagine having literally thousands of people screaming insults at you and not being able to reply,” Diana Crandall, who worked as a social media editor for a major online news site, told Salon. “It can be very emotionally draining … there are times you want to scream at people: ‘Just go outside. Make a new friend. Get a dog. Log off the internet.’” The stream of anger was ceaseless: “On a holiday or a weekend or whatever, people are still blowing up social accounts for any number of outlets or brands ... it can breed cynicism in the social editors who send out the information,” she added.

Type “social media jobs” into your search engine, and you’ll see tens of thousands of results. Fifteen years ago, you would have found zero — the term didn’t exist yet, of course. Within a span of a decade, the job title “social media manager” went from nonexistent to normal. Having a social media presence is a requirement for pretty much all companies, and while some companies rely on contractors, others have their own in-house managers. Even small businesses live and die by their social media presence — and one rotten social media incident, left unmanaged, can sink a business.

Yet despite a social media presence becoming so normal, even required, for employees in certain fields like journalism, education seems not to have caught up. Working in media, I can say safely that my education did not prepare me for the psychological toll that accompanies having thousands of strangers harass you; few, if any, journalism schools prepare students to deal with the inevitable cyberbullying that they will face over their careers, and how to manage it — both practically and psychologically.

Crandall, who has a degree in journalism, agreed that she was unprepared. “Schools should teach entire semester-long courses on these topics,” she told Salon. “I don’t think it’s far-fetched at all to assume that students will soon be able to major in social media strategy and management.” (Indeed, USC, Rutgers and the University of Florida are but a few schools that have similar programs now.)

Being a social media manager means being a sacrificial lamb, doing emotional labor on behalf of these large corporations. Of course, many people have jobs that require emotional labor; it’s just that social media managers must serve as punching bags in a much more direct way. They are a mix of customer service and public relations agent rolled into one; and when posting and replying constantly is the only way keep one’s brand relevant, there is tremendous pressure not to fuck it up.

“In the beginning, I often took any "mistake" as a personal one — even things that were completely out of my control, like how a web page rendered on a [user's] computer or device,” says Victoria Reitano, a social media manager who now runs her own boutique digital marketing agency called CreatiVix Media. Prior to starting her own agency, Reitano ran social media for a few national talk shows, where she cut her teeth dealing with trolls and PR crises.

At first, Reitano says she took criticism too personally. She even learned how to code just so she could help fix website issues that angered consumers. “There was immense pressure at every one of my full-time positions to fulfill these requests, and it did take a toll on my personal life,” she adds.

“My worldview was negatively affected,” said Crandall of her experience as a social media editor in a newsroom. “If you hang out in a room all day with 10 million people — many of them negative or complaining — it changes the way you see things.”

Emotional stress is one thing, but the stress can also become physical. I asked Reitano if she found the work emotionally draining, or if it affected her physically or made her seek therapy. “Yes, yes and uhhh, yes,” she said. “It is totally emotionally draining work, but as I had prepared for a career as a journalist, this is no more draining than that.”

“A past position was so taxing that it did start a period of hair loss for me,” said Nicole Schuman, who currently works as a community manager for a major test prep company. That was a learning experience for Schuman: “I now know how to say when I need help, and when not to take on too much. Learning to say no is important for everyone,” she added.

For those who work in social media for newsrooms, the stress can be compounded by having to constantly post about gruesome, even traumatic stories. “Covering mass shootings and terrorist attacks affected my life much more than I thought it would,” Crandall told Salon. “People who read stories and watch clips on the news can turn that off any time they want to. Social media editors, like many others in the newsroom, read every single story, every single update, and often times we are combing through social media as an attack is unfolding.

“And of course, after a social editor finishes updating the stories about the initial horrific attack, the victim profiles come,” Crandall continued.  “And when you have hundreds of mass shootings a year in the United States, this can happen two or three times a week. I didn’t anticipate that at all.”

The idea that “corporations are people” is an oft-cited, yet technically incorrect maxim that American liberals are fond of spouting. Yet if brands are considered to be people in any sense of the word, their faces are these social media managers. While the boardroom managers and CEOs are the ones who make the decisions that often infuriate a company’s customer base, the social media managers are the ones who must deal with the wrath stemming from these decisions. Unlike the CEO or the board, they are uninsulated. And sometimes those attacks become personal.

“Most of the time, people didn’t [know] who was managing the accounts,” said Crandall. “So I would get away without having to deal with any personal attacks.” But there were exceptions — particularly when Crandall had to appear on video to cover a protest or event. When this happened, attacks on her personal appearance came in waves. “Comments about my looks or my reporting definitely toughened me up, and also showed me how uninterested I am in engaging with that type of hate,” she told Salon. She keeps a lower profile as a result: "To this day, my Twitter avatar is a picture of me as a little girl at a computer, and my professional Facebook page has a picture of me wearing a snorkel.”

Still, many of those who have made social media their profession say that despite the stress and the emotional toll, it is worth it. “There is always a lot of pressure in a breaking news environment,” said Crandall. “With the amount of pressure that surrounded the 2016 election, it was definitely pulse-quickening, but that was a lot of what made it exciting.” And of course, there’s the thrill of the share: “When you share a story that’s important for a lot of people to see and you watch it get shared a thousand, two thousand, fifty thousand times, that’s powerful. In situations where there’s imminent danger — like in a shooting — having the tools to know precisely where and when an attack is occurring and then tweeting out the information to a massive audience can truly save lives,” Crandall added.

“I kind of love tackling the issues that arrive in our social media inboxes, or on our page,” Schuman told Salon. “It's a challenge. Most of the time commenters don't even think there is another person on the other side.... It brings me a strange kind of joy to turn them from irate to happy customers.”

Crandall agreed that it could be rewarding. “I’ve watched social media hold people accountable, warn of danger and bring massive amounts of people together, sometimes in the span of three minutes. Ultimately, working with editors and journalists to tell important stories that wouldn’t make it out into the world without social media makes this job worth it, no matter where I’m working.”