GOP's internal war over Roy Moore: It's only going to escalate 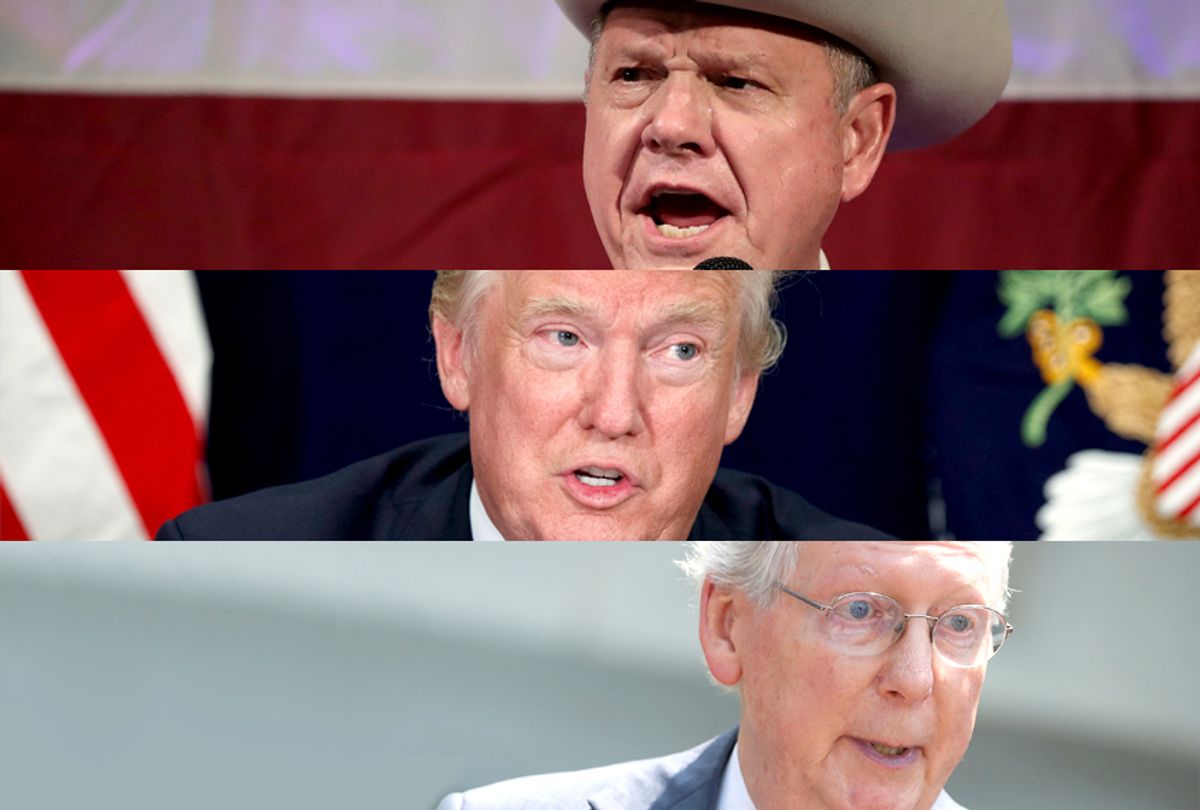 As even more details emerge from the past of Alabama senatorial candidate Roy Moore, the national Republican Party has firmly turned against him. But mounting evidence that the state Supreme Court's former chief justice preyed upon teen girls seems to have mostly unaffected Moore’s popularity among his hard-right supporters in Alabama across and the nation.

On Tuesday evening, the Republican National Committee became the second party organization to withdraw its support for Moore, just days after the National Republican Senatorial Committee severed its joint fundraising agreement with his campaign.

Yet even the Monday public statement and evidence offered by Beverly Young Nelson, who said that Moore sexually assaulted her in his car outside a diner in 1977, when she was 16 years old, has been unpersuasive to his most crazed devotees. Some, including Rep. Mo Brooks, R-Ala., have begun to double down on their loyalty.

Other Alabama Republicans have offered similar reactions to the allegations, including state Rep. Ed Henry who has said that "Roy Moore is the victim" and that women who wait to make accusations of sexual assault should be prosecuted. At writing, public opinion surveys  indicate that Moore continues to lead Democratic nominee Doug Jones by 3 percent.

Other Moore supporters have been feverishly spreading blatantly false stories, including claims from an obviously fake Twitter account that appears to have been based on a stolen identity from a deceased veteran named Doug Lewis. On Tuesday, an Alabama TV station reported that a pastor had received a deceptive voicemail message purporting to be from a Washington Post reporter seeking to pay potential sources willing to speak against the GOP candidate.

One of the biggest spreaders of such false stories has been Moore's wife, Kayla. Besides propagating a number of hoax stories to Facebook friends and followers, Kayla Moore created her own fake news by forging a letter she claimed had been signed by 53 Alabama pastors supporting Moore. It was actually an altered version of an earlier document the pastors had approved months before Moore had been accused of molesting teenagers and trying to date many others.

The polls might change in light of Nelson’s presentation of a high school yearbook apparently inscribed by Moore -- who wrote, "To a sweeter more beautiful girl I could not say 'Merry Christmas,'" and signed it with "Love, Roy Moore D.A." But a number of state and national far-right activists are signaling that they will support Moore even if he is guilty of sexual assault.

In a message sent Monday to AL.com, Rep. Brooks was shockingly frank in discussing his continued to support Moore. He dismissed the credible charges made by five different women as “contested,” while citing no evidence that they might be false. For Brooks, stopping the “socialist” Doug Jones was all that mattered.

Some hard-right conservatives are dismissing the evidence against Moore as an elaborate fabrication concocted by George Soros, Amazon.com CEO Jeff Bezos and other assorted left-wing bogeymen. Others are claiming that the hated "Republican establishment" worked hand-in-glove with the Washington Post to plant evidence and then bribe conservative residents in Moore's hometown of Gadsden, Alabama, to defame him publicly.

No one has presented any evidence for these claims but that has not stopped them from being spread widely within the far-right internet ecosystem. Never mind that even reporters from Breitbart News have only bolstered the Post story. Multiple outlets have confirmed that Moore was widely known in Gadsden to have pursued relationships with young teenage girls. His efforts were so excessive that at one point he was reportedly banned from the local shopping mall.

In his Tuesday broadcast, radio host Rush Limbaugh prepared his audience for the idea that they should support Moore even if it became clear that he had attacked young girls. Instead, according to the top-rated radio host, conservatives should focus their ire on Washington Republicans.

Dismissing the increasing number of allegations against the twice-censured former judge as a mere "soap opera," Limbaugh claimed that even if Moore were guilty, the accusations against him are really about Senate Republican leader Mitch McConnell trying to intimidate Breitbart News chairman Steve Bannon and other far-right activists.

Don’t forget that Judge Moore, Trump did not endorse him, but Steve Bannon, I don’t know, enforced, chose, got behind, supports, what have you, and Bannon has been very up front about the objective he has, and that’s to get Mitch McConnell out of the Senate. Even if all we had was one allegation against Judge Moore, this was gonna be it for Judge Moore, didn’t matter, because this is now being used to send a message to Bannon and his group that you think you’re gonna get rid of me, well, take a look at what’s gonna happen every time you try.

Citing no evidence beyond Moore's perpetually shifting denials, Limbaugh further claimed that McConnell and his nefarious allies could and would concoct sexual assault allegations against anyone simply in order to hold power. Then Limbaugh prepared his audience for possible charges of rape to emerge against Moore:

The first allegations, the first accusations did not make Roy Moore resign. So now new allegations are coming forward. They’re ratcheting up the charges, and now it used to be the guy just likes young girls. He likes to be in their company and he likes to smooch and this. But now the charges are matriculating, and they have become full-on sexual assault charges.

If that doesn’t work, I fully expect a charge of rape to eventually be forthcoming.

While shocking, Limbaugh's remarks are not surprising. He is merely echoing what top conservative activists like Bannon and far-right pundits have been saying for weeks.

Moore's support does appear to be slowly eroding, but he could very well still defeat Jones in one of the nation's reddest state, a possibility that the national GOP is contemplating seriously. Firmly aware of the liability Moore would present to other Republican candidates in 2018 and beyond, Sen. Cory Gardner of Colorado, the NRSC chairman, openly called for the Senate to refuse to seat Moore if he wins the election. McConnell, the Senate majority leader, has called for the Christian nationalist former judge to abandon his campaign, calling Moore "obviously not fit" to be in the Senate and signaling that he, too, might support banning the Alabamian from the upper chamber.

The Senate certainly has the power to refuse to lawfully elected members, as well as to expel them. But the Republican leadership's efforts to rid itself of Moore will almost certainly encourage the extreme right to rally against them. As the New Republic's Jeet Heer noted on Monday, regardless of what happens, Republican elites are now in a lose-lose scenario. If they manage to stop Moore from becoming a senator, they will offend their most dedicated voters and energize the insurgent slate of candidates Steve Bannon is backing against Republican incumbents. If they decide to let Moore take his seat in the Senate, his presence will likely tar all Republican candidates as tolerating child molestation.

The one person who might be able to prevent the GOP bloodbath that appears to be coming is President Donald Trump, who has conveniently been out of town on an extended official trip to Asia. The Trump administration has already publicly stated that Moore should end his candidacy if the allegations against him are true. As the charges continue to look more and more convincing, that particular political waffle will soon become unsustainable, however. Attorney General Jeff Sessions, the former occupant of the Senate seat at issue, gave a possible preview of what the White House perspective on Tuesday when he said in a congressional hearing that "I have no reason to doubt these young women."

But even if Trump were to call for Moore to withdraw as a candidate, there is no guarantee that doing so would persuade Moore's most devoted supporters to back down. It might be enough to convince the Fox News audience that it's time to stop, but would certainly enrage Trump's most extreme fans.

Tuesday evening provided a quick look at what might happen in this regard after Fox host Sean Hannity gave Moore 24 hours to resolve the inconsistencies in his denials. The staunchly Republican commentator's ultimatum was met with anger and derision on the conservative Free Republic forum as well as from numerous Twitter users, a few of whom are quoted below.

I am now on the verge of being done with Hannity..I’m very sorry but his Friday interview with Judge Moore was just that...an INTERVIEW...Hannity acting as though he was conducting a cross examination. Judge Moore was not on the witness stand and the witch hunt continues

Even Bannon, the president's self-proclaimed wingman, has long ago pronounced himself ready to go to war against Trump if he deems it necessary.

Moore could still lose the Dec. 12 election, of course. While that unexpected result would reduce the Republican majority in the Senate to 51, it might actually be the most palatable outcome for the party, at least for a little while. That's why it's highly likely that Sen. Jeff Flake of Arizona won't be the last top Republican to openly call on Alabama Republicans to vote for Democrat Doug Jones next month. Ultimately, however, the underlying issues that led to Moore becoming the GOP nominee would still remain. Republicans are having a difficult time getting rid of Moore now because they refused to get rid of him years ago.