In Trump's U.S., The Punisher has become Captain America 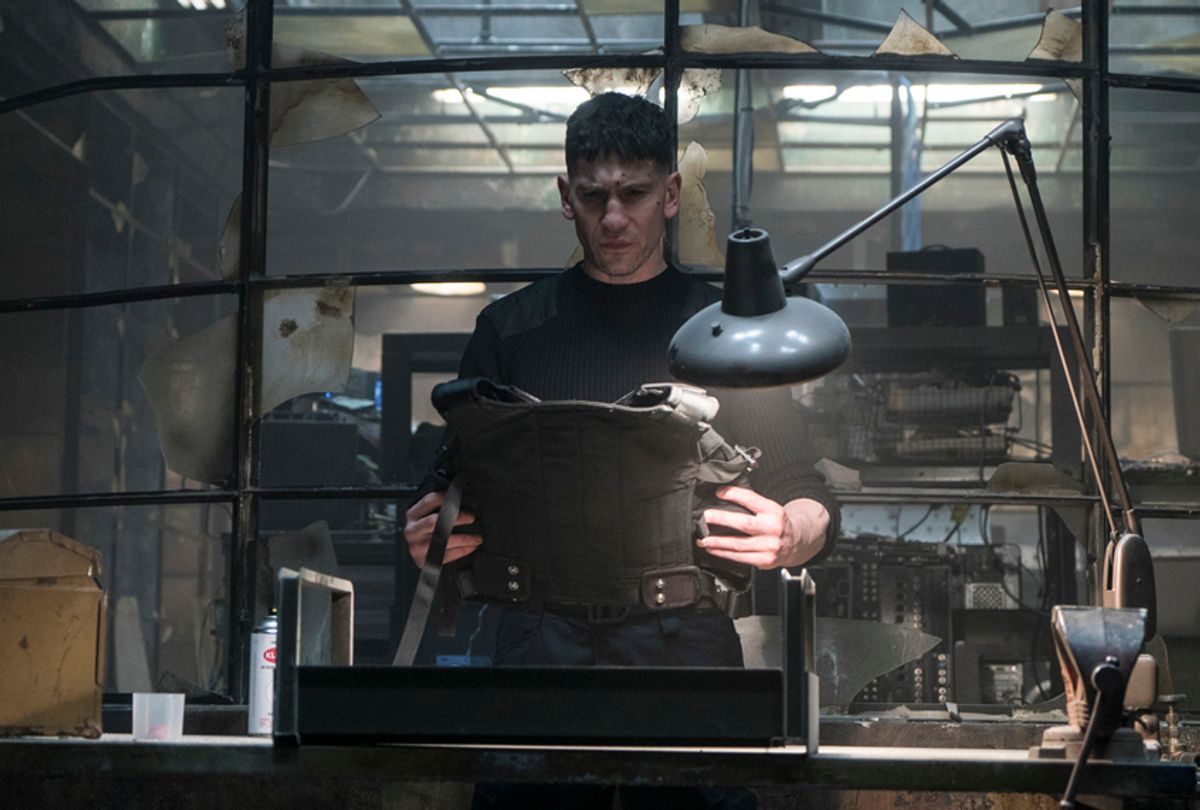 Flattened and perverted by a generation of us-or-them, with-us-or-against-us psychomachia-inspired messaging from the right (and left), even the very idea of heroism has been corrupted almost beyond recognition in America.

For many, snipers, men who kill at the distance of a football field, are heroes. So too are cops and civilians who kill without reason and outside of the law. Politicians who mouth Christian values, without walking the walk, are heroes. Anyone who commits any kind of crime, belongs to the wrong community, comes from the other side of the political spectrum or simply offers any kind of dissent to traditional, calcified values is an evil, eternal villain to this same population.

In this post-9/11, polarized country, where many believe counterfactually that crime is now more of a threat to American lives than ever before, it’s little wonder that the iconic symbol of the Punisher, the Marvel comic-book character, can be seen on the uniforms of our military personnel and the police cars that patrol our streets.

Clad in black with a massive skull across his chest, the former Force Recon Marine also known as Frank Castle kills criminals at all levels and of all kinds without remorse or sympathy — doing the vital job, as the logic for many goes, that the corrupted official justice system isn’t strong, brave or honest enough to do.

For these people — mostly men — Superman, Batman, Captain America and even the real-life cop on the beat and the judge behind the bench have all lost the thread and lack the guts it takes to bring peace and balance into our world. These are the same people who cheer Zack Snyder’s murderous, Randian takes on Batman and Superman in the Warner Bros. DC film franchise, the same people who see cops in military body armor in real-life America as an unfortunate, but necessary step to quell the unrest they see as consuming the public sphere.

Frank Castle, M249 SAW at his side, has those guts. The street-level vigilante is, for a significant subset of our country, the hero we need right now.

But as Frank Castle, two-dimensional on the printed page and in the new Netflix series, reminds his audience regularly, he is nothing of the sort. Moreover, the war he wages has no relation to the America we live in.

Yes, Frank lives by a code of justice, one he believes is ultimate and higher than that of anyone else. But even he understands that the way he executes it, while just, is not right. He knows he’s eventually going to the hell he imagines he sends his targets to.

Castle looks at Captain America, Thor, Iron Man, and understands them as weak, as unwilling to do what needs to be done. But he also understands that these Avengers are the true heroes. He, by his own admission, is a revenger who understands his absolute war on all crime and on all criminals is neither tenable nor ethical from 360 degrees.

“When it’s all over,” Frank says of his black-and-white battle against crime in “Moon Knight” vol. 3 #10, “when they’re all dead and the war is over, there’ll still be one bullet left to clear all accounts.” Here he admits that he deserves exactly the absolute punishment he deals out and, if necessary, will apply it to himself.

And besides, as the comics and the TV series make clear, Frank’s crusade is a personal one he wages out of rage, hurt and anger. Triggered by the murder of his family, Castle doesn’t operate out of a sense of nobleness or self-sacrifice, but — much like the Charles Bronson “Death Wish” character he is patterned after — the transference of his own pain onto the world at large. Essentially, his categorical framework for justice is rooted in personal psychosis.

Captain America, long the moral standard bearer of the Marvel Universe, put it more simply when he beat the living hell out of the black-clad vigilante after he killed inactive criminals in front of the star-spangled hero in 2006’s “Civil War” miniseries. “Frank Castle is insane,” he said.

As Castle’s character has evolved from his beginnings as a Spider-Man foil near the end of the Vietnam War (Frank was originally portrayed as a veteran of that conflict) to his rise as a popular antihero in the Reagan era and beyond, this has become all the more clear.

Through and following Garth Ennis’ now-definitive take on the Punisher, the idea that the darkness that powers his crusade existed inside him long before his family died has been established as canon. The simple theory here is that many people lose their families to violence in the real and fictional worlds (Batman included), but almost none of them reactively launch into homicidal wars against the universe. That takes a different kind of mind. Frank, it seems, always had one.

For easy kicks, morally gray narratives and, yes, good old-fashioned revenge-fantasy jollies, Castle works brilliantly and satisfyingly when limited to the printed page or the television screen. More than that, his almost Heideggerian or Nietzschean (take your pick) dedication to a simplistic, one-lane moral/ethical code has an interesting effect when kept to the confines of fiction.

Unlike other comic-book characters, Frank has no qualms about his actions, even if he understands that his position has its faults. While other characters spend umpteen panels and plenty of ink doing the work of teasing out the moral questions involved their actions through tortured, wandering exposition (see “Civil War,” “Civil War 2” and “Captain America: Civil War”), Castle forces the audience to do that work for themselves, to engage and labor with a sometimes — though certainly not always — challenging text.

So, yes, reading a Punisher book is often just about sitting back and unironically enjoying the carnage as a man solves his and the world’s problems with an M60 or M1911 (Frank likes his Vietnam-vintage tools). Regularly, though, it means confronting the faulty logic of Castle's problem-solving approach, one that normally admits no possibility for rehabilitation, mercy or error.

But out in the real world — where criminals and military opponents also happen to be real people, where bias and misidentification exist, where everything is even less black and white — people in military units, police departments and the civilian public are not doing that work. There, the Punisher has become a totem of a false belief that, yes, America is in an existential war with threats from within, that the well-researched evidence that violent crime has been on a downward slide for decades is somehow the opposite of reality.

This is the same theory that has made us the nation of manifestly harmful mandatory incarceration minimums, of treating convicts like caged beasts, of Ferguson, of Tamir Rice and Freddie Gray, of police-training programs called “Killology,” of an absolute war on terror whose prosecution only increases, not decreases, our number of enemies, of Jeff Sessions’ belief that marijuana is the same as Fentanyl, of almost everything President Donald J. Trump says and does. It’s a toxic categorical framework without nuance, kindness or nobleness, and Frank Castle is its unfortunate mascot.

The Punisher is a great character in a 2D universe where evil exists and the world can actually be saved by a handful of adventurers in a matter of pages. Outside of it, he’s a death’s-head symbol of an vicious ideology that only sees America at its worst and looks to absolutism as a way out. The fact that he’s a hero of our times suggests just how desperately we need to revise our shared notion of heroism -- and ourselves.