Even the captivating Jon Bernthal can't save this grim, overly long slog 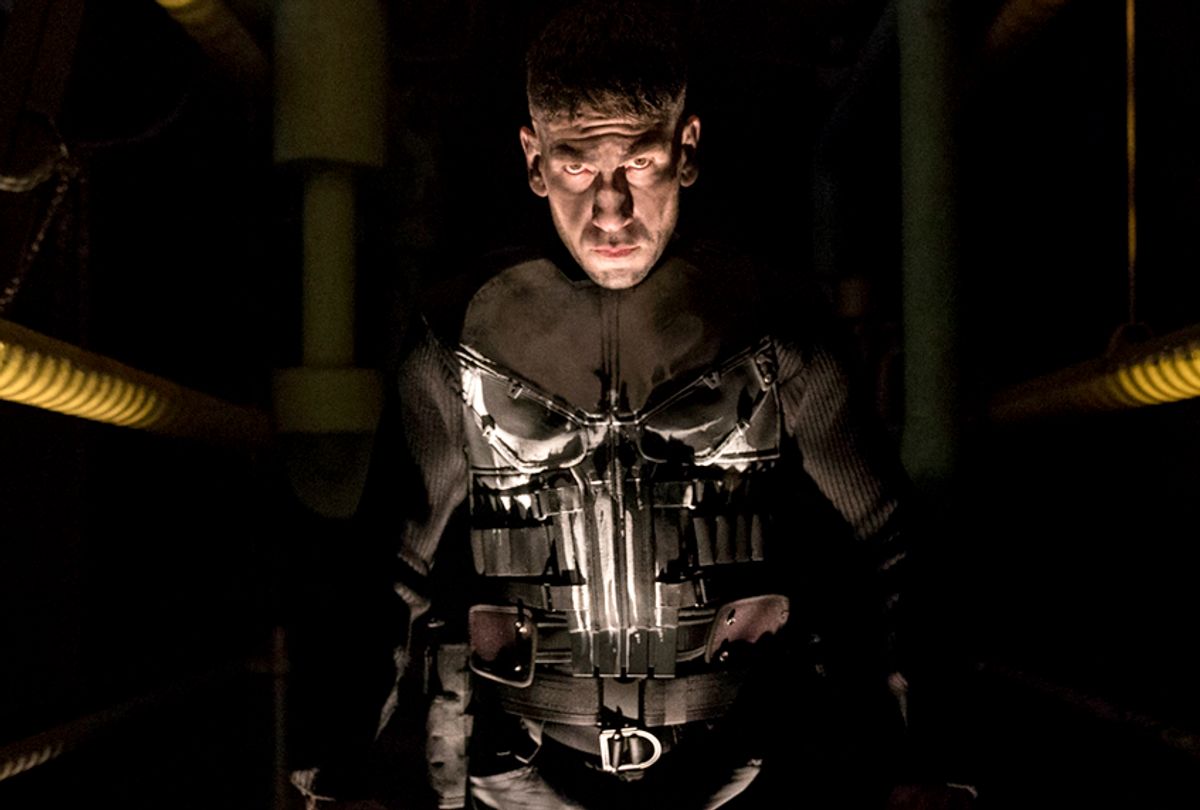 Frank Castle likes to beat things. Kicking and stabbing works too, but give the man a sledgehammer, and he’s home. In the opening episode of “Marvel’s The Punisher,” rolling out Friday on Netflix, we meet Frank six months after he believes he’s completed the mission of avenging his family, the bloody tail-end of which plays out in the first couple of minutes. This early in series the world believes special forces operative Frank Castle is dead, but he’s actually a quiet man living under an assumed name, working through his pain by shattering concrete walls at a construction job.

A show called “The Punisher” isn’t going to keep a man like Frank out of commission for long and sure enough, the ex-Marine soon finds himself back in his familiar black and hunting down the perpetrators actually responsible for ripping his family and his happiness way from him.

As heroes go, Frank’s motivations are as simple as his methods, and his introduction in season 2 of “Marvel's Daredevil” is one of the best elements of a mediocre and haphazardly constructed sophomore run.

His moral code is black and white: cross his line, and he will rain ugly, bloody justice down on you. The compelling Jon Bernthal plays Frank Castle and introduces him as pathologically introverted and thickly bearded man who has caged his anger to such a degree that those around him mistakenly believe him to be soft in the head.

Even in his relative silence, broken by bellows and grunts, Bernthal gives the character something of a prismatic appeal, evoking a vulnerability and anguish beneath a sublimated fury that, when it comes out, is more terrible to witness than it is magnificent. Bernthal channels these sentiments great precision, making Frank’s blunt-force destruction utterly watchable in some scenes. The actor really does wear the hero mantle with command, but that only goes so far in a story that soon becomes a slog.

“The Punisher” hints at the kind of series it’s going to be by building predictably to an orgasmic spasm of barbarity at the end of the first episode which, of course, puts Frank back on the radar of people who are doing very bad things. But first he crosses paths with David “Micro” Lieberman (Ebon Moss-Bachrach) a former NSA analyst who, like Frank, is believed to be dead.

Micro shares Frank’s mission, and eventually Frank covertly rejoins society at Micro’s behest and with the support of fellow vets such as Curtis (Jason R. Moore), a counselor supporting other brothers-in-arms recovering from PTSD, and Billy Russo (Ben Barnes), another companion in Frank’s unit who has transitioned his skills into an executive position of a private security firm.

Although “The Punisher” may be the most masculine of the Marvel series — which is saying something — it also has a strong central character in another Afghanistan vet, Homeland Security agent Dinah Madani (Amber Rose Revah). Even so, Dinah is a figure whose backstory is more interesting than her role in the plot — she’s the child of Persian immigrants and a loyal servant of her country. She’s also more capable than her boss, who immediately shows his hand as a swaggering jerk by demeaning her professionalism, her patriotism and her gender in a single swipe. It may be too much to expect subtlety from a series titled “The Punisher,” I realize.

But then, this is just one glaring example of the way the series forgoes finesse in favor of bludgeoning us with its concept. Dinah is also a sexually confident woman which, in this universe, translates to a smash-cut of her initiating a steamy encounter by slamming her partner up against a wall (as a side note, I feel sorry for anyone hooking up with a date who learned everything they know about foreplay from watching these shows; your mornings after will require coffee, arnica and, if you want to keep your security deposit, spackle).

“The Punisher” is the latest entry into Netflix’s Marvel “Defenders” universe, and as Frank Castle, Bernthal carries this solo outing with more fortitude than Finn Jones’ Danny Rand, the central figure in “Marvel's Iron Fist.”

That series is the weakest in the streaming service’s Marvel collection, with “Marvel’s Jessica Jones” standing as the best of them. With those serving as the opposed markers on a best/worst quality scale, “The Punisher” sits somewhere closer to the middle; it’s much better than “Iron Fist,” thank goodness, but it doesn’t achieve the marrow-deep resonance in its messaging in a way that “Jessica Jones” does.

That said, Bernthal’s charismatic performance adequately sells “The Punisher” as an action piece, which speaks to the depth of his talent more than a person might consider. Although Frank Castle is one of the Marvel universe’s more popular figures, others have tried to bring him to life on the screen and failed. And that's odd when you consider that although introduced in 1974, the Vietnam veteran bears the markers of a Reagan-era popcorn-flick heavy. Previous attempts to build a theatrical franchise around the character include Dolph Lundgren's take the vigilante in a 1989 film and Thomas Jane playing the role in a 2004 version. Ray Stevenson played Frank Castle in 2008's "The Punisher: War Zone."

I have to admit, I forgot that at least one of these movies existed, and can barely recall the details of the other two. This leads me to wonder whether the problem isn't with the actor playing Frank Castle, but with the character itself.

Some of the difficulty in making Frank Castle palatable on a massive scale may reside in the notion that he's a questionable hero. As Salon Deputy Editor Gabriel Bell reminded me, he was introduced as a villain.  A number of heroes in the various comic book and fantasy universes have their seeds in similar origins, with the suggestion of true redemption being beyond their reach becoming part of their dark allure.

But Frank’s roaring anti-hero tendencies get in the way of the emotional workings of “The Punisher.” Beneath all the gunplay, blood-spurts and punishing is a weighty story about broken people and the callousness with which politicians and a corporatized military heartlessly exploit devoted young men for their own evil ends. But you’d have to be willing to tough out the grinding dreariness and numbing stretches of hyper-violence to fully appreciate that.

The series attempts to clarify that point with a subplot featuring a psychologically troubled young soldier in Curtis’ group, but halfway through the season it’s still isn’t clear what role he plays in Frank’s universe. Deborah Ann Woll pops up to reprise Karen Page, a secondary character on “Daredevil” whose appearance here feels similarly extraneous.

Showrunner Steve Lightfoot may be making a point with the series’ near-fetishizing of over-the-top violence, a theme he played with in his work on “Hannibal,” but a person will have to ask herself if she’s willing to fully appreciate that right now.

The concept of Jessica Jones, a jaded, hard-drinking trauma survivor with super-strength and a wry wit, felt right on time when it debuted in 2015. Even “Marvel’s Luke Cage,” for all of its third act plot flaws and outright failures in its finale, offers a measure of catharsis in its story of a bulletproof black man bent on protecting his community and clearing his name.

“The Punisher” comes to us in the wake of two high-casualty mass shootings, the most recent claiming the lives of 26 people in Sutherland Springs, Texas. Netflix cancelled the series' New York Comic Con panel, which would have taken place days after the mass shooting in Las Vegas in early October.  Context matters, and those horrors are just a few ticks on a long list of reasons reality saps our energy on a daily basis.

The Punisher is a war vet who metes out justice with guns, guns, guns which, in the current climate, either speaks in its favor or warns you to steer clear. On the page that’s exciting; on the screen, no amount of Bernthal’s charisma can prevent it from growing tedious, regardless of which side a person stands on in the gun-control debate.

A love for skull-pounding action flicks should be a prerequisite for enjoying “The Punisher,” but even those who count ourselves in that group may find it tests our limits in the same way any hero who solves problems strictly by punching through them eventually does.