Roy Moore in the home stretch: He has survived, and is likely to win

Relying on the tried-and-true Republican strategy of invoking a liberal conspiracy, Moore is poised for victory 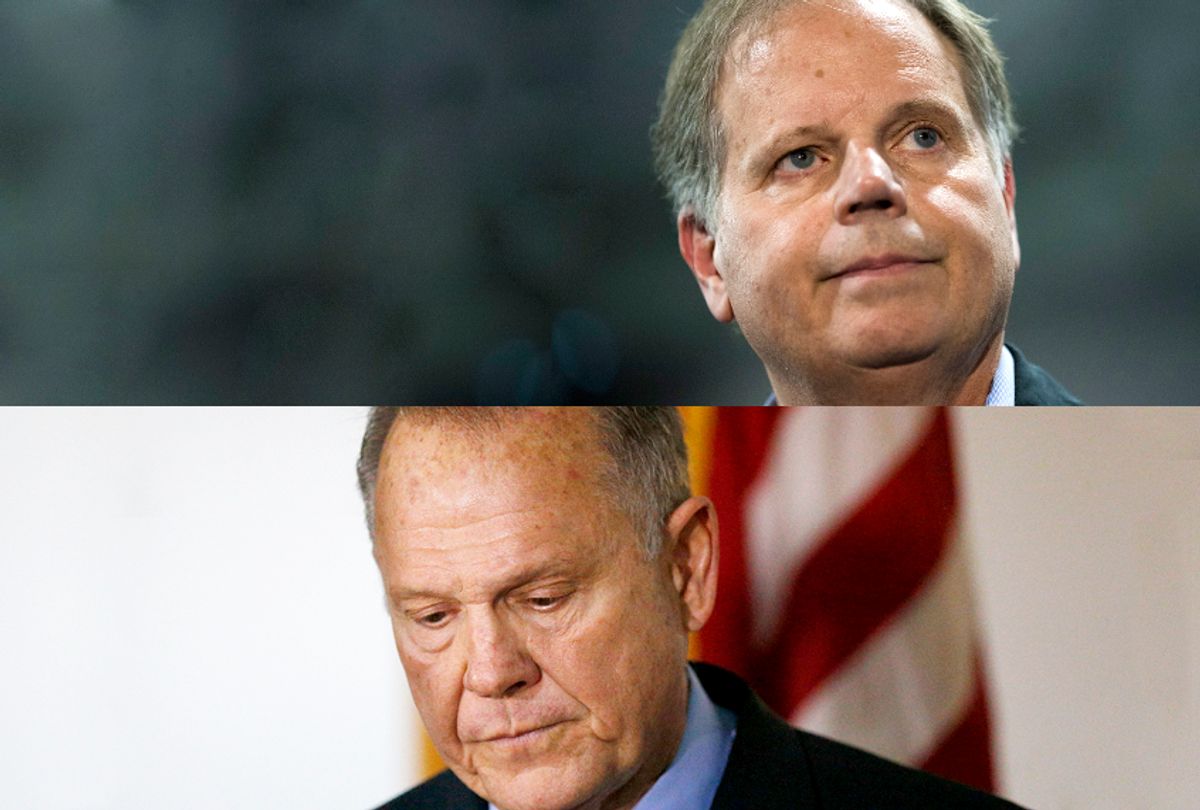 Recent public opinion surveys seem to suggest that Alabama Republican Roy Moore has successfully recovered from the multiple sex scandals that had set back his bid to become the state's next U.S. senator.

A poll conducted on Sunday and Monday by Change Research found the twice-suspended former judge had a five-point lead over Democrat Doug Jones, a former federal prosecutor. Another survey from Emerson College that was conducted Saturday through Monday found Moore up by six points.

In large measure, Moore's recovery has been based on appealing to what political scientists call "negative partisanship," the idea that many voters decide whom to support based on antipathy to someone or something else, rather than agreement with a specific political program.

Moore's usage of negative partisanship fits within the larger arc of Republican politics in recent decades. While the phenomenon has increased among Democrats since the 1990s, it has been essential to Republican politics for far longer. That's primarily because conservative attacks on "big government" have never been popular, even among Republican voters. Beginning with George H.W. Bush in 1988, all Republican presidential campaigns have tried to use cultural populism on issues like Christian nationalism, homosexuality and guns as a distraction from economic positions that were politically toxic.

In attempting to mitigate the damage caused by stories from the Washington Post and local Alabama media, Moore has hewed to the negative partisanship framework. He and his supporters have created numerous specious arguments, all predicated on the idea that conservative Christians are under assault from an "establishment" consisting of liberals and Republican leaders who somehow want to work together.

After initially refusing to deny that he had sought romantic or sexual relationships with teenage girls or that he had molested a 14-year-old, Moore eventually firmed up his repudiation of the charges. From the very beginning of the controversies, Moore has insisted that the allegations against him were the work of Democratic political operatives as well as national Republican leaders eager to drive him from the race.

This crisis management technique probably wouldn't work outside a deeply conservative state like Alabama. In polling, most Americans see GOP leaders like Senate Majority Leader Mitch McConnell or House Speaker Paul Ryan as too conservative. But in the world of cultural-populist conservatism, Republican leaders are frequently portrayed as wishy-washy moderates or even liberals who too easily betray the cause. The constant criticism that GOP elites receive from right-wing media has created a strange situation where a majority of self-identified Republican voters disapprove of their own party's leadership, and have for some time.

Moore and his allies have also sought to push back against The Washington Post for publishing the accounts of several women who say that he sought them out as teenagers. There has also been a campaign, conducted by various parties, to spread false information about the women.

On Nov. 11, the candidate promised that "there are investigations going on" into the first Post article. It is unclear what Moore was referring to, but it is worth noting that the day before, the far-right group Project Veritas had set in motion a poorly planned scheme to bait the Post with a false claim that Moore had impregnated a teenage girl years ago and then forced her to have an abortion.

Moore's wife Kayla has been one of his most prolific social media defenders, spreading numerous fake news items critical of the Post and the former judge's accusers. She also claimed on Nov. 13 that "we are gathering evidence of money being paid to people who would come forward" and said that whatever evidence they collected would be used in litigation. The next day, an Alabama television station revealed that a Mobile-area pastor had received a voicemail message from a man claiming to be a Washington Post reporter named Bernie Bernstein who was seeking to bribe women to report damaging information about Moore. (The Post has no reporter by that name and has said it made no such calls.)

As Moore's numbers began to sink, he found himself abandoned by national Republicans who had endorsed him, even hard-right elected officials like Sen. Mike Lee of Utah and Sen. Ted Cruz of Texas. With even Fox News host Sean Hannity edging away from him, Moore decided to firm up his denials, while also insisting that the fact that his accusers had not stepped forward earlier suggested that they were lying. His defenders didn't bother to mention that many victims of sexual harassment or sexual assault often feel too intimidated to come forward soon after being harmed, including all of the women (so beloved by conservatives) who had accused former president Bill Clinton of sexual misconduct.

Moore's Republican defenders have also sought to muddy the waters and utilize negative partisanship among Democrats to their own advantage by unearthing allegations of sexual harassment against Democratic political figures such as Sen. Al Franken of Minnesota and Rep. John Conyers of Michigan. Unlike Moore, whose extreme religious views have made him a virtual pariah among Washington Republicans, Franken and Conyers have strong national bases of support among activists and liberal media figures. This has meant that Democratic leaders like Rep. Nancy Pelosi and Sen. Chuck Schumer have reacted slowly and clumsily to the allegations, even as other Democrats have been moving privately to have Conyers resign his office.

Thus far, Democratic antipathy toward Republicans has kept Franken and Conyers from being forced to give up their seats. As of this writing, neither politician has faced more than a few calls from within the party, raising concerns among some feminists that Democrats care more about partisan political advantage than equality for women.

Conservatives have rejoiced at their success in turning the tables and putting Democrats in the hot seat. Radio host Rush Limbaugh was exultant during his Tuesday program about how "good" it all was.

"Keep Franken there. He's a buffoon, he's an idiot," Limbaugh said. "And with Franken there, there's a consistent 'Well, what about Al Franken?' As long as Franken stays there, then we retain the opportunity to point out the hypocrisy of these people."

The allegations against Democrats have also been helpful in convincing Moore allies (including Limbaugh) to argue that even if the former judge is guilty of the accusations against him, these incidents occurred 40 years ago and therefore Moore should get a pass, an implicit appeal to the Evangelical belief that any past crimes can be absolved only through prayer and repentance.

Other Moore fans on the religious right have gone so far as to defend the idea of older men dating teenage girls as a form of protest against the evils of secularism and feminism.

Ultimately, naked partisanship seems to be making the biggest difference for many Moore defenders, including President Donald Trump.

In a Monday campaign rally, Moore made an appeal to cultural populism, arguing that the accusations against him were really attempts by Democrats to distract the public.

"They want to hide the true issues of immigration and health care, military readiness, taxes, abortion and transgender rights," he said. "They also not only want to hide the issues, they don't want my opponent's issues revealed; how he stands on these issues. I'll tell you how he stands: completely contrary to the people of this state and this country."

After avoiding the accusations against Moore for days, Trump and his White House advisers began edging back toward the embattled candidate, flat-out saying that regardless of the allegations, he would be better for Alabama and America than Jones.

“The innocence or guilt of Roy Moore is really not even at issue here because the people of Alabama made a decision, based on the evidence they had, who they wanted to vote for,” Gina Loudon, a conservative political commentator who has acted as a Trump campaign surrogate, said during a Tuesday interview with Breitbart News. “At this point, what is relevant is only the decision that is in the hands of Alabamians right now.”

Trump has kept a strictly negative partisan view in his comments about the race. He has never come out and endorsed Moore, but has repeatedly argued that it would be wrong to vote for Jones.

“The last thing we need in Alabama and the U.S. Senate is a Schumer/Pelosi puppet who is WEAK on Crime, WEAK on the Border, Bad for our Military and our great Vets, Bad for our 2nd Amendment, AND WANTS TO RAISES TAXES TO THE SKY,” Trump posted to Twitter on Sunday.

Democrats and Jones supporters have been pouring millions of dollars into television ads, promoting the accusations against Moore and running spots encouraging Alabama Republicans not to be afraid to vote for a Democrat over the national "embarrassment" of Moore. At the same time, however, a number of local Democrats have argued that the Jones campaign has failed to spend money on door-to-door canvassing aimed at encouraging Democratic voters to turn out on Election Day.

“Right now, many African Americans do not know there is an election on December 12,” state Sen. Hank Sanders, a black Democrat, told The Washington Post.

Moore's apparent success at stabilizing his GOP support and the immense partisan disadvantage Democrats face in Alabama (a state Trump carried over Hillary Clinton by 28 points) seem to indicate what could be described as a worst-case result for both parties: Roy Moore will likely be elected to the Senate.