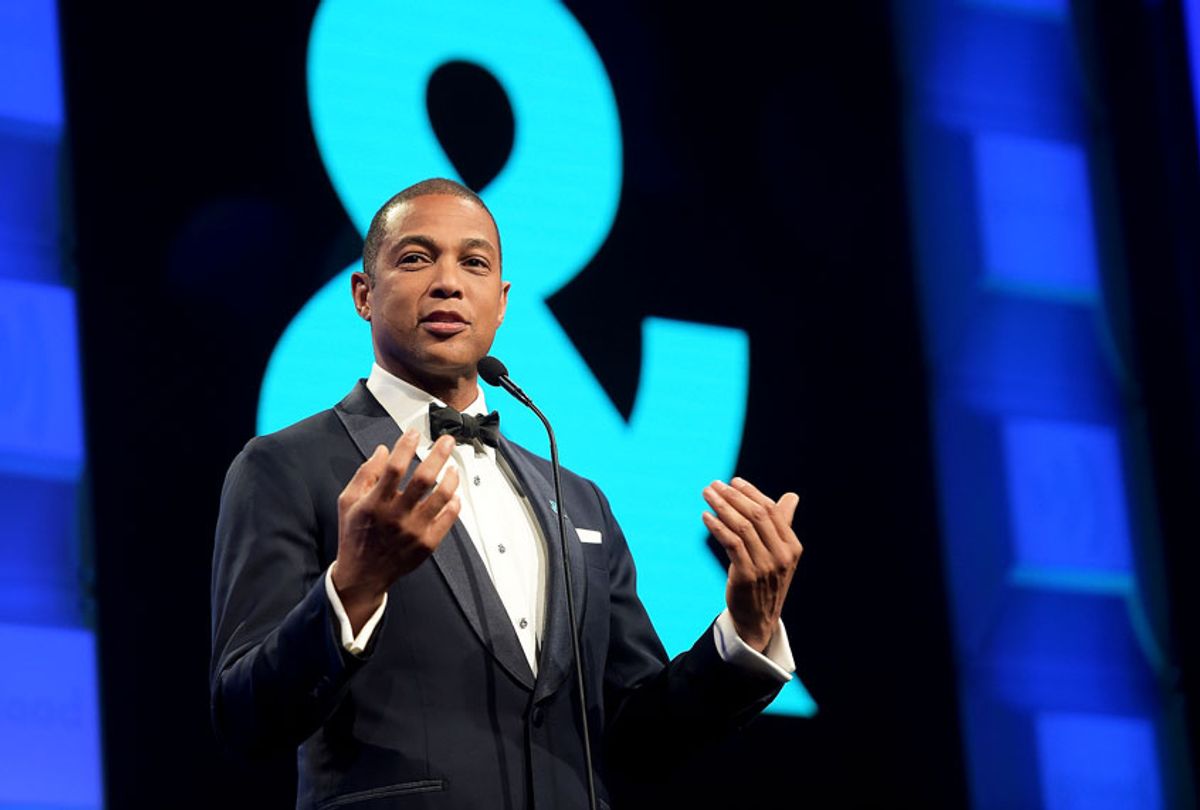 No one can know whether those words echo in Don Lemon's consciousness from time to time except, of course, for Don Lemon himself. Recently, though, that moment has bobbed to the surface of my memory stream again. A woman yelled it at him as she was passing Lemon during a live sidewalk stand-up in 2015 as he reported from Charleston, S.C., one day after a white supremacist murdered nine black worshipers at the Emanuel African Methodist Episcopal Church.

In the clip Lemon maintains his cool as the woman's voice threatens to drown out his banter with his on-air partner. Unfazed, she walks into the frame and calls him and then-President Barack Obama Uncle Toms. "Are you angry, Don?" she yelled. "Because we're angry. Speak about the anger."

Timeline matters in any serialized story set in a scripted universe, and it's just as important here. You see, the Charleston horror occurred in June 2015. Two months earlier, GQ ran a profile about Don Lemon that invited us to reconsider our collective ridicule of the CNN anchor while admitting how easily and willfully he sets himself up to be the butt of the joke.

Back then and even a few years after that, Lemon rarely demonstrated much in the way of outrage at authority and establishment, giving viewers yet another reason to loathe him. He was a rising star in the news world, a black, gay man in an era when the mainstream still clung to the story of a post-racial America in the face of reality bent on shattering that myth.

By 2016, Lemon was well-established as an object of derision and made no apologies for it. This site alone contains a thick catalog of Lemon's gaffes, which range from the horrifying (asking one of Bill Cosby's accusers why she didn't bite him to fend off his alleged sexual assault) to the ill-conceived.

One of his most famous debacles involved him holding up a giant black sign with the n-word written in gigantic white letters, asking, "Does this offend you?" A day later Larry Wilmore replied to Lemon in a segment that ran during an episode of "The Nightly Show." "You wanna see what really offends me?" Wilmore asked, then held up his own black card with white letters spelling "DON LEMON."

The Don Lemon of 2015 was the gag du jour, everyone's punching bag. If you wanted to get black people to shake their heads, roll their eyes and suck their teeth, all at the same time, all you had to do was mention his name. Lemon has an Emmy and an Edward R. Murrow Award; he was also named one of the worst journalists of 2014 by the Columbia Journalism Review.

And while the GQ article contained a number of fascinating revelations, topmost being that Lemon purportedly didn't know how to pronounce the word "sorbet," this passage is most telling:

"He didn't have many close friends in high school. The black kids didn't think he was great at being black, and the white kids didn't want to bring a black kid into their sphere. Still, he was elected senior-class president: accepted by none but liked by all."

That's more or less the main prerequisite for being a CNN news host.

Skip ahead to early November 2017, as Lemon interviews Alabama Senate candidate Roy Moore's oily lawyer Trent Garmon, who opens the interview with, "Hope that I'll be able to give you the name Don 'Easy Peasy, Lemon Squeezy' and you'll take it easy on me."

Lemon's face betrayed little in that moment, but he did not take it easy on Garmon, even as Moore's lawyer dodged his questions, which Lemon pointed out many times. When Garmon again tried to call the host "Lemon Squeezy, Keep It Easy" while pivoting from a direct answer about sexual assault allegations, Lemon halted him by saying, tersely, "It's just Lemon. Hold on. My mom didn't name me Don Lemon Keep It Easy Squeezy. It's just Don Lemon. Go on."

Lemon kept his composure through the entire bizarre exchange, even as Garmon spoke over the host and belittled him, in coded terms, by sprinkling his responses with "man" and saying, "I gotcha, man," as Lemon pressed him. A presumption of familiarity is a time-honored move among bullies and the disingenuous, and Garmon exercised it in the worst way possible.

The difference, in 2017, is that Garmon was the punchline this time, not Lemon. Lemon acquitted himself as well as a person could when dealing with a shuck 'n' jive con artist. "I just think it's disrespectful to call people out of their name," he told Garmon at the close of the interview. "I wouldn't call you some name other than yours."

Mind you, the fact that Garmon believed the whole "Lemon squeezy" idiocy would somehow fly speaks as loudly about his ignorance as it indicates how much the host still has to live down. Arguably, however, that's not entirely Lemon's fault.

There's a striking line in the film "I Am Not Your Negro," inspired by the writings of James Baldwin, where the literary giant observes, "I was in some way, in those years, without entirely realizing it, the great Black Hope of the Great White father." Baldwin was speaking to the dilemma of being an idealized representative of a minority population, existing within a culture unwilling to grant his people unconditional acceptance. In a sense, it also describes the conundrum into which Lemon appears to have been thrust — or one he willingly stepped into.

CNN's brand is one of centrism, geared to appeal to the widest swath of viewers possible. And CNN president Jeff Zucker admitted in that GQ article that any chatter Lemon generates, good or ill, is good for CNN.  But it wasn't necessarily good for Lemon's image. And I cannot imagine the headlines repeating the woman's slur of "Uncle Tom" rolled off of him like water off a duck's back, regardless of the psychological armor he's worn all of his life.

Roy Wood Jr. flawlessly broke down the unique challenges African-American journalists face on a segment of "The Daily Show" that aired in October 2016, explaining that black reporters and anchors have to hold themselves back from displaying passion even when their interviewees and other guests treat them disrespectfully. Otherwise, they'll be labeled as angry and, more likely than not, lose credibility, if not their very livelihoods. All on-air talent has to remain emotionally neutral; that's been true since before Walter Cronkite famously broke his collected comportment on the air to wipe away a tear at the news of John F. Kennedy's assassination.

Anchors who aren't white must be as transparent but are saddled with the additional charge, unspoken of course, of being colorless and calm. Lester Holt's serene baritone is unshakable, even in the face of horror. As the broadcast anchor of "NBC Nightly News," he has to be. And for years, Lemon played the part of the black anchor who expressed conservative opinions and didn't necessarily echo the overwhelmingly common view when heated topics spiked. His first emotion was never, ever anger.

But one of the benefits of being a network's lightning rod is that when a poisonous force slanders your team as "fake news," perpetuating the falsehood that nothing you say or do is trustworthy, then you are no longer obligated to be polite and hold in your fire. If you watched the Garmon interview and the months of commentary that have preceded it, it's pretty clear that Lemon's tapped into that anger, at long last. He can do that because his anger channels the steam of CNN's viewership. His outrage is a reflection of our collective outrage.

Bringing it back to that mention of scripted timelines, the moment made me wonder if we might be in Season 2 of Don Lemon, metaphorically speaking.

To explain what I mean, many of the best television series don't hit their stride in their first season. Think "30 Rock" or even that most hallowed of dramas, "Breaking Bad." Some fans of "Buffy the Vampire Slayer" initiate newbies by explaining the premise before telling them to jump right into Season 2, when the show ascended to its greatness. That's the point when a show has more confidence, the network stops meddling and the creative forces behind it are allowed to let the story bloom into what it is meant to become, whether great or terrible.

And since the 2016 presidential campaign, Lemon has been done playing the nice, calm guy in the face of reason's demise.

Twitter loves his fiery monologues or loathes him for his partisanship. He's isn't afraid to call the president's racism exactly what it is. He points out that Trump treats journalists who look like Lemon with less deference and respect that his white counterparts. And he's more apt now than ever before to toss his guest's baseless arguments and condescension back in their faces.

"You're smarter than this," political commentator Ben Ferguson told Lemon during a heated exchange in which Ferguson posed no reasonable argument for his critique of NFL players choosing to taking a knee during the National Anthem.

Now, with any fresh turns in a story line, this development is new enough that we can't entirely trust it to be indicative of permanence. Lemon still makes awkward, weird remarks here and there, but so does every cable news anchor. He takes swords to Trump's hypocrisy on a regular basis but, let's face it, the president is an easy target. When a more difficult story emerges, especially a thornier event involving race and class that has no simple angles, that will be a more significant test.

But in reappraising the growth that the "fake news" assault has instigated in Lemon I can say something I never imagined I would two or three years ago. I look forward to watching him and considering what he says in those darker hours. "Speak about the anger," a woman said in 2015. Today, he can't help but do precisely that.