The so-called analysis released by the Treasury Department asserts, and relies on, massive economic growth 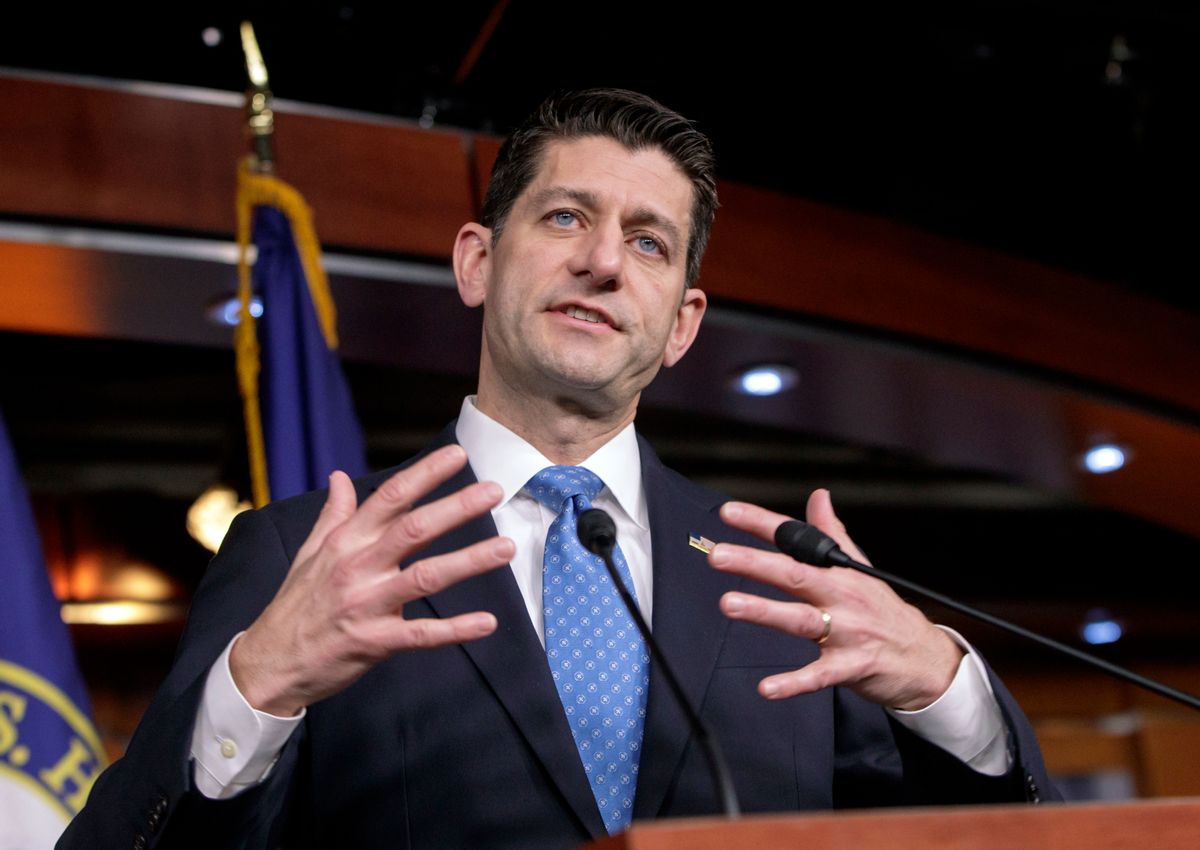 FILE - In this March 30, 2017, file photo, House Speaker Paul Ryan of Wis. discusses the Republican agenda during a news conference on Capitol Hill in Washington. The conservative Club for Growth is targeting powerful committee chairmen and other top Republicans, part of an aggressive ad campaign to rally support for the GOP's struggling health care overhaul effort. The television and digital ads, unveiled earlier this week, pressure Republicans to a back a revised version of the GOP health care bill that Ryan abruptly withdrew last month because it lacked the votes. (AP Photo/J. Scott Applewhite, File) (AP)
--

House Speaker Paul Ryan, R-Wis., is supporting the one-page document that was, at long last, produced by the Trump administration and asserts the recently passed GOP tax plan won't add to the national debt and that the massive tax cuts for the rich will simply pay for itself.

Steve Mnuchin's Treasury Department finally unveiled its long-promised analysis on Monday that explained how a $1.5 trillion tax plan would pay for itself. The document relied on two bold assumptions — neither of which is likely to happen.

"I think that estimate makes a lot of sense. I do think we're going to have a big, positive dynamic effect," Ryan said, in support of the analysis.

The plan is essentially contingent on the U.S. economy growing 2.9 percent each year for the next decade, which is based on numbers from the Office of Management and Budget, according to The Washington Post. But the nonpartisan Congressional Budget Office has only projected 1.9 percent growth. And that's a rosy projection, the Post noted.

The Joint Committee on Taxation, a nonpartisan congressional scorekeeper, predicted the GOP tax plan would only add up to 0.1 percent economic growth each year for the next decade.

"One percentage point of higher growth sounds like a little bit, but it's the equivalent of me being one foot taller and able to dunk a basketball," Mark Mazur, an economist who served as assistant secretary for tax policy at the Treasury during the Obama administration, told the Post.

The Treasury splits up the streams for economic growth from two sources: the first being substantial tax cuts to businesses and corporations, and the second being a variety of factors, some of which, have not even happened.

The one-page analysis stated: "We expect the other half to come from changes to pass-through taxation and individual tax reform, as well as a combination of regulatory reform, infrastructure development and welfare reform as proposed in the [Trump] Administration's Fiscal Year 2018 budget."

"Treasury has released a one-page [analysis] which will be used by tax cut advocates to claim that the tax cut pays for itself. It's a joke and no substitute for the career staff running the full macro model they have to analyze effects," tweeted New York University tax law professor, David Kamin.

It's no surprise, of course, that Ryan has staunchly defended the Trump administration's practically baseless one-page assertion. Ryan has already promised to help pay for the future deficit increase that has been projected as a result of the GOP tax plan by promising deep cuts to Medicare, Medicaid and Social Security to balance out the costs.

Despite Trump's campaign promises, the tax plan recently passed by the GOP will almost certainly be a direct blow to working class Americans, who are often the primary beneficiaries of such programs.