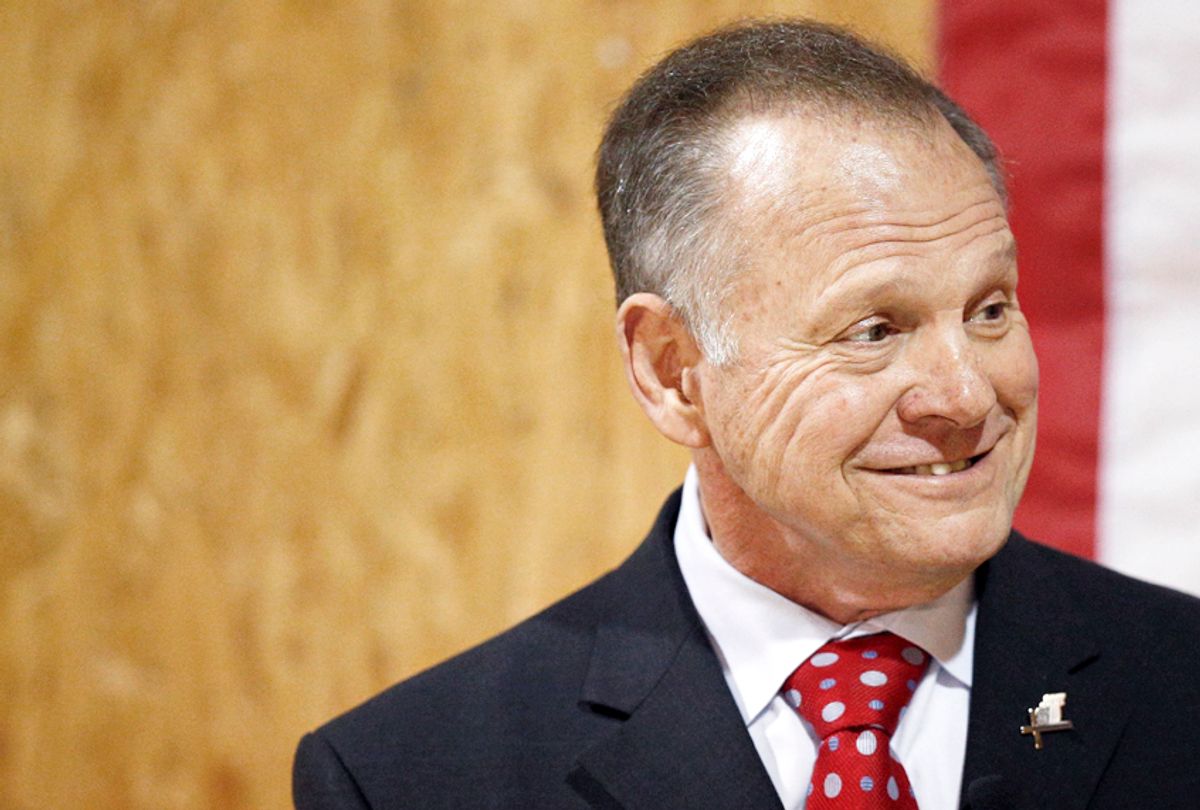 As the polls in Alabama open for the special election to decide the state's Senate seat, Republican candidate Roy Moore is hearing the final thoughts of both friends and foes — even as pundits continue to speculate about not just the outcome, but the deeper meaning of this particularly special election.

Prior to a rally on Monday night, one of Moore's friends, and fellow Vietnam veteran, Bill Sailing, reminisced about an experience that the two of them shared while serving together in Vietnam. After describing how a third friend who was about to leave the country took them to a brothel to celebrate, Sailing mentioned that "there were certainly pretty girls. And they were girls. They were young. Some were very young." He then described how Moore insisted on leaving, although they allowed their mutual friend to stay behind with the young girls.

Members of the Twitter community have noticed the irony in Sailing's story.

Whereas Sailing told his story with the goal of helping Moore, another personal narrative has been circulating during the final days of the election by someone who very much intended to be critical of the Republican candidate.

Peanut farmer and former state representative Nathan Mathis has garnered media attention for a two minute video in which he described how his own lesbian daughter had committed suicide when she was 23 and how he had been forced to reevaluate his own anti-LGBT prejudice as a result — a prejudice that he sees reflected in Moore's campaign.

"This is something people need to stop and think about. You’re supposed to uphold the Constitution. The Constitution said all men were created equal. But how is my daughter a pervert just because she’s gay?" Mathis asked.

He added, "I said bad things to my daughter myself, which I regret. But I can’t take back what happened to my daughter. Stuff like saying my daughter was a pervert, I’m sure that bothered her."

Behind the scenes, one of the major players in the race has been Steve Bannon, the Breitbart executive and former White House strategist for President Donald Trump. Bannon has been a staunch supporter of Moore's campaign, to the point that Breitbart has even attacked Trump's daughter Ivanka when she has spoken critically of Moore's alleged actions.

By coordinating various conservative media outlets into discrediting the women who had accused Moore of sexual misconduct, Bannon had managed to salvage Moore's candidacy at a time when many Republicans and conservatives were calling on him to drop out of the race, according to Bloomberg. As Moore himself put it, "He’s the counter to the ‘fake news’ — he’s been a stalwart. It’s helped us a lot. He’s the master strategist."

Bannon has emulated the tactics of two propagandists for dictatorships whom he openly admires, Nazi filmmaker Leni Riefenstahl and Soviet director Sergei Eisenstein.

In this election, somehow that went unnoticed.

Despite all this news, there's still no certainty as to what will happen.

"There’s a massive spread in results from poll to poll — with surveys on Monday morning showing everything from a 9-point lead for Moore to a 10-point advantage for Democrat Doug Jones — and they reflect two highly different approaches to polling," statistician Nate Silver explained on his website FiveThirtyEight.com. He noted that the dynamics of the Alabama election had been rendered unpredictable because, although Republican candidates rarely lose there, Moore had become controversial due to accusations that he had engaged in sexual misconduct with multiple underage women.