The five most dystopian apps of 2017

Inflating the egos of the 1 percent? Monetizing your children? There are apps for that, regrettably 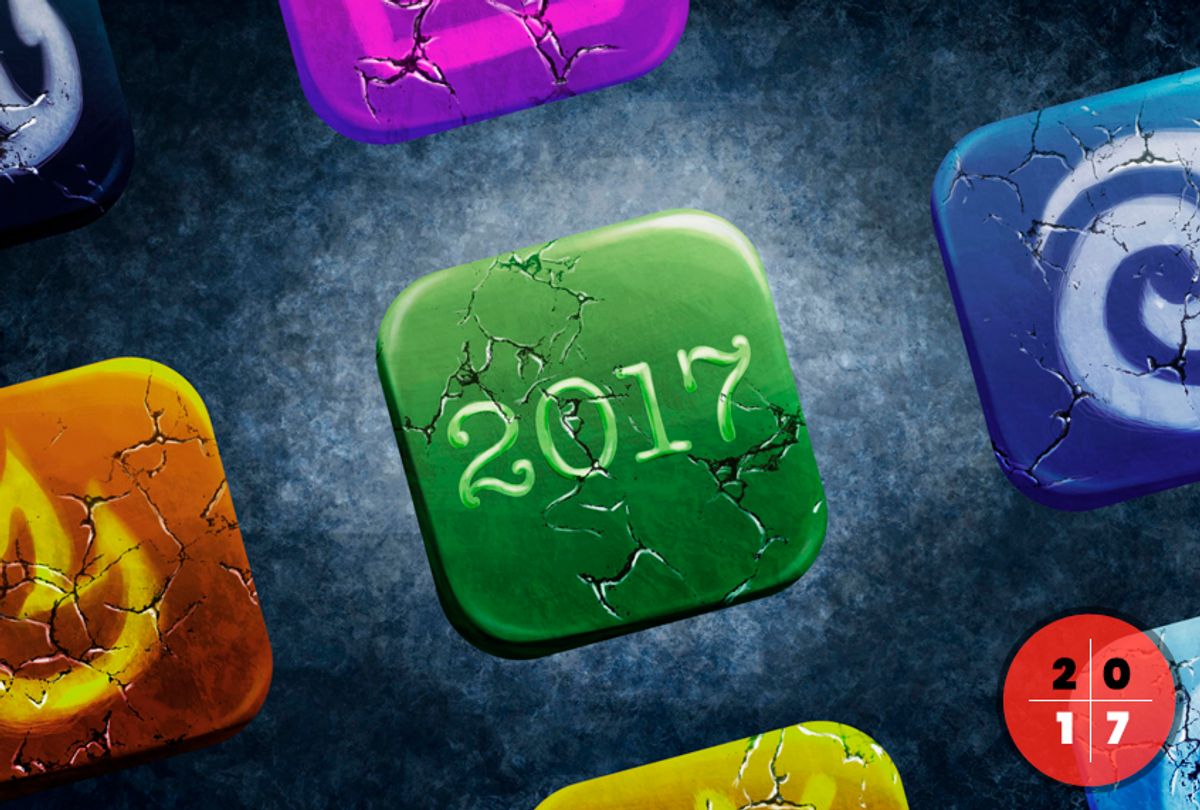 2017 was many horrible things, but it was definitely the year that the public fell out of love with Silicon Valley.

There were the Bodega and the Juicero debacles, which many saw as proof positive of Silicon Valley’s cultural incompetency. We saw the public vandalism of a patrol robot in San Francisco whose primary function was to police homeless people. Elsewhere, two former Facebook executives decried their former company. And very public sexual misconduct scandals within the tech community, many of which were not dealt with gracefully, revealed an industry just as rotten as any other.

But there are many other, less specific signs that tech isn't dazzling the public the way they used to. Once upon a time, every new iteration of consumer-facing innovation was followed by a mad rush of everyday people and businesses adopting it. Having one’s own website was the rage in the 1990s. Being on Facebook and Twitter seemed the standard in the in the ’00s. Having one’s own app became a goal in the 2010s.

Now, app-mania is on the wane, with some prognosticators asking whether we need to have apps at all. “The go-go growth days [of apps] are gone," opined Peter Kafka on Recode. "Even the very biggest app publishers are seeing their growth slow down or stop altogether. Most people have all the apps they want and/or need. They're not looking for new ones."

So we’re not going to publish a “best apps of 2017” list. That would be bathing in a techno-utopian optimism that is already a thing of the past. Today is a rather more dystopian moment. Look at our president, our congress, our news cycle and the shows we binge-watch. Tomorrow seems ever more "Black Mirror" than "The Jetsons."

Instead, we've rounded up the new apps and app developments that seem to be signs that our cultural, technological and moral compasses are pointing toward a future of constant surveillance, app-enabled privilege and a standard of discourse that would have rankled even Philip K. Dick. Enjoy (if you can).

What it is: Facebook used to not let children under 13 use their app, but academic studies show that advertising to children is highly effective, often because kids can’t differentiate between content and commercials. According to a 2012 academic appraisal, other negative outcomes of advertising to children include increased likelihood of obesity, bad nutrition habits, and use of alcohol and/or cigarettes. But it’s lucrative, so naturally Facebook — which is basically an advertising firm dropped into a digital yearbook — wants to get in.

Why it’s dystopian: The earlier you get hooked on their platform and communicate through it, the more of your youthful indiscretions (in chat form!) will be saved in perpetuity, just waiting for a hacker to uncover and then publicly leak chat logs that attest to something offensive you said or did when you were 10, thus ruining your adult career. Even Charlie Brooker would tremble.

What it is: You know what it is. You’re probably logged in at home, on your work computer, and on your phone all at once right now.

Why it’s dystopian: The app you know and love, it turns out, may be undermining democracies, serving as a stooge for intelligence agencies to manipulate foreign governments and public opinions, psychologically profiling you to make you more addicted to it, and reducing public debates into battles for the most “likes.” Meanwhile, the CEO behaves like the president of the U.N. and has to assure us that his corporation is trying to maintain election integrity, while also dropping hints about having political ambitions.

What it is: Greta Van Susteren, a Fox News anchor for over a decade, launched her own app this year. As she explained on Facebook:

Why it’s dystopian: The idea that one’s guilt, and the public acceptance of it, is mediated by the public via app sounds a lot like the act of turning apologies into public trials, putting the power to forgive in the hands of the public rather than the hands of those affected. It also sensationalizes and flattens the idea of apology itself, by putting it up to a vote and reducing it to another form of content.

What it is: It’s like Tinder, but you have to be in an elite caste in order to be invited to use it. "It’s unclear exactly how Tinder decides who gets invited and who doesn’t, but the common thread among those on the Select app is that they’re generally attractive and relatively high-profile," a TechCrunch reporter wrote. It's much like Raya, if Raya were a VIP section of a popular app rather than its own hidden club.

Why it’s dystopian: Did you think that online dating already felt like an alarming attempt at quantifying unquantifiable personal traits, thus converting the immortal soul into numbers and metrics upon which we are ranked and sorted? Well, you should now.

"Black Mirror" explored just that in the episode, "Rate Me," about a world in which all human interactions are ranked and rated, and in which those with higher ratings are conferred elite social and economic status.

Well, Tinder decided to make that episode from fiction into fact. If you thought society was already grossly unequal and divided into haves and haves-nots whose arbitrary social and physical qualities confer a patina of superiority, Tinder is here to give the elite more reason to misinterpret privilege and luck as value.

What it is: Like Tinder Elite, The League bills itself as a dating app for the elite. "Are you told your standards are too high? Keep them that way," their website brags. You have to apply to get in (the app vets both LinkedIn and Facebook profiles to verify you are who you say you are). Supposedly, anyone can get accepted — but the catch is that the app constantly uses an "advanced screening algorithm" to weed out non-committal users. Naturally, a Stanford grad created it.

Why it's dystopian: Any algorithmic system that rates peoples' personalities and ranks them in turn is a bit creepy, inasmuch as it's both impersonalizing and it's quantifying things that are qualitative. Likewise, we live in an era characterized by a resurgent and often unapologetic form of elitism and a ground-level backlash against it. Whatever the outcome there, the public at large doesn't really need a system, sitting in our purses and pockets, that's dedicated to amplifying and perpetuating such inequalities. But such is 2017, the year when Silicon Valley doubled down on helping consumers turn themselves into subjects to spy on and commodities to jam into algorithms.