Civil disobedience in the Trump era: A new wave of activism?

For those who believe Trump is an illegitimate president, it's time to step up to stronger tactics 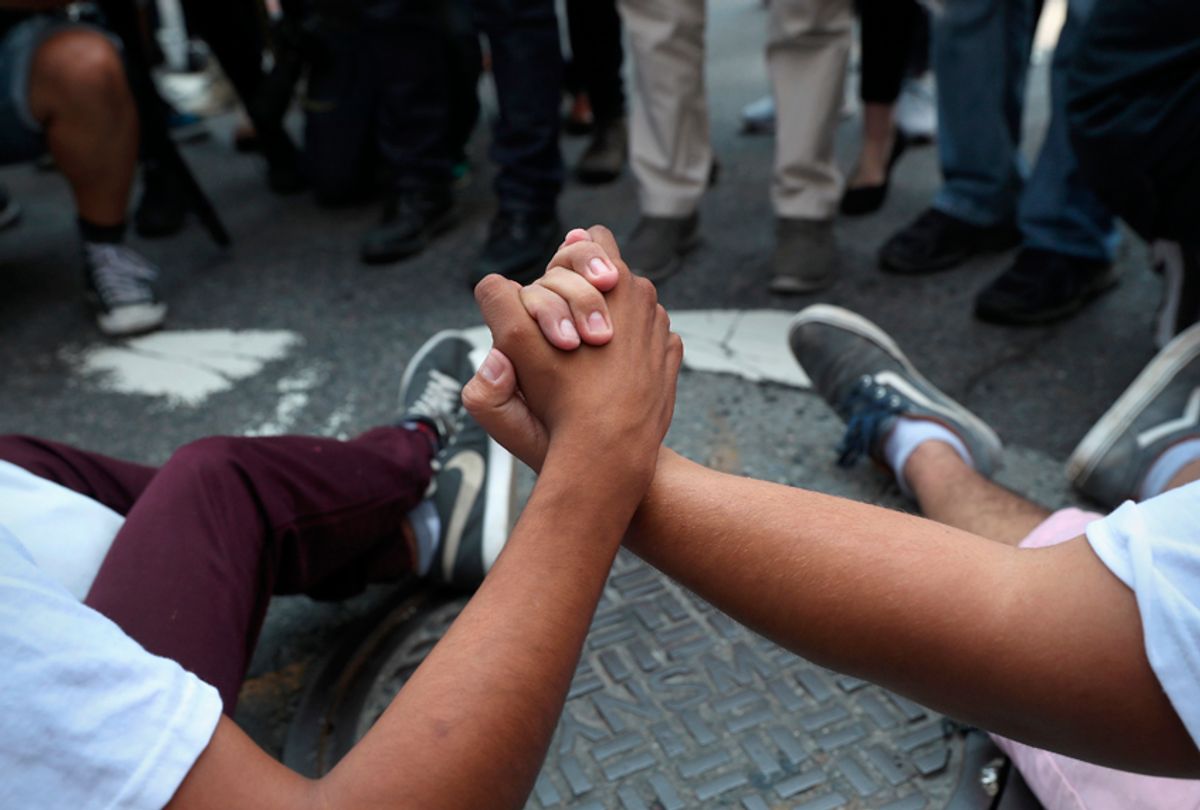 We currently live in a nation whose leader is accused of, and is actively being investigated for, colluding with a nation that for decades has been considered an active hostile enemy of our own. Anyone with money can get away with anything.

That was my friend Nate, a Pennsylvania man in his late 20s who works for an ambulance company. He was explaining in semi-jest why people in 2018 might decide they've had just about enough of acting within the law with when an illegitimate president can flout the law with seeming impunity.

Whether or not Nate was being serious. he has a point.

To be clear: I do not condone under any circumstances, and I would never advocate the type of lawlessness that offers people an excuse to indulge in their worst impulses. But we're overdue for a phase in which people refuse to follow certain laws to protest corruption in our political system — that is, for a wave of civil disobedience.

Let's say President Donald Trump fires special counsel Robert Mueller or pardons Michael Flynn and others necessary to Mueller's investigation. What about the possibility — or the probability — that the preponderance of evidence indicating collusion between Trump's campaign and the Russians becomes more damning, which would certainly account for Team Trump's efforts to preemptively discredit the Mueller probe?

Legal philosopher Ronald Dworkin has identified three broad categories of civil disobedience. The first is based around defying bad policies, in which people "break the law not because they believe the program they oppose is immoral or unjust, but because they believe it very unwise, stupid and dangerous for the majority as well as any minority." The second he deemed "integrity-based," because it involved people refusing to act in ways that the law requires but that violate their own conscience.

There aren't many examples of the first form of civil disobedience in the Trump era. One could point to any marijuana smoker who wants to defy Attorney General Jeff Sessions' attempts to ratchet up the war against weed, which he insists is only used by bad people. Ironically it is government officials who have come closest to integrity-based civil disobedience, although because they work for the state I doubt their actions count as civil disobedience. I think of former Deputy Attorney General Sally Yates, who refused to enforce Trump's travel ban, or the mayors of sanctuary cities who have refused to help Trump round up undocumented immigrants.

The third form, however, fits almost too perfectly to the situation the anti-Trump movement faces — "justice-based" civil disobedience, which aims "to oppose and reverse a program" that protesters believe to be unjust. Dworkin cites the example here of civil rights protesters refusing to leave their seats at segregated restaurants. Yet the Trump scenario represents a fundamentally different type of injustice. It doesn't directly inflict mass suffering on the scale of institutional racism, but it erodes democracy by arguably allowing an unprecedented act of collusion with a foreign power to put a president in office and then make himself unaccountable to the law.

How do you fight that? By first refusing to recognize the president as legitimate, then insisting that the facts about his illegitimacy become unquestionable staples of our political debate — and yes, that means calling out as foolish or worse those who insist on denying those facts, and finally defying his most notorious and unjust laws.

The reasons why we need to do this bring us to the facts related to the second goal. These are not opinions, or a partisan spin, but the hard truth about Trump's situation. When an illegitimate president is in power -- and this can be proved based on facts rather than conspiracy theories or outlandish readings of legal theory -- those who deny those facts should not be considered credible participants in our national dialogue. (I'm looking at you, Fox News and Breitbart.)

There were plenty of factors pointing toward collusion before Trump even took office — the advisers he hired with links to Russia, the way his campaign focused on rewriting the Republican National Committee platform to please Russia, Trump urging Russians to hack into Hillary Clinton's email account. Over the last year we've also learned that Trump's campaign tried to get dirt on Clinton from the Russian government, that top Trump officials like Jared Kushner and Sessions have been caught concealing information about their contacts with Russia, that former national security adviser Michael Flynn was forced to resign in disgrace related to the Trump-Russia scandal, and that WikiLeaks head Julian Assange felt so comfortable about his working relationship with Trump's campaign that he asked to be made Australia's ambassador to the United States.

Add to that the fact that the president still won't reveal his tax returns, which would shed more light on his extensive business ties to Russia, and the number of connections between the Trump campaign and the organization that published Clinton's stolen emails, and the most plausible explanation for the president's behavior is that he's been compromised by a foreign power. This in turn would make it likely that he fired former FBI Director James Comey to obstruct the investigation into his misdeeds, and that any subsequent firings will be further attempts to get away with his crimes.

As for the third goal I mentioned above? It could be justifiable to refuse to honor the most onerous laws implemented by Trump that would not have existed had he not become president. Why should the crime of an undocumented immigrant residing in the United States be addressed when that of a man who conspired with a foreign power to steal an election goes unpunished? How can we justify allowing a man who won the presidency in part by colluding with a hostile foreign power, and who didn't even win the popular vote, to create a voter fraud commission that will inevitably dream up new ways of limiting Americans' ability to vote?

If the president himself is illegitimate, then he has no right deciding who gets to stay in this country. Similarly, an illegitimate president who comes up with new ways to stop people from voting should see those citizens metaphorically and literally storm the gates to guarantee so that they can get to the polls.

This is an example of the kind of justice-based civil disobedience that would send the message Donald Trump will need to hear in 2018. These forms of resistance will offer Americans their only hope of not only ridding themselves of a president who acquired power through nefarious methods, but of setting a precedent that will make future politicians hesitate before following his example.

On the other hand, maybe I should have read Nate's remark as a joke and let it go.