Even though she hasn't announced a run for president, Jones is already starting a campaign against her 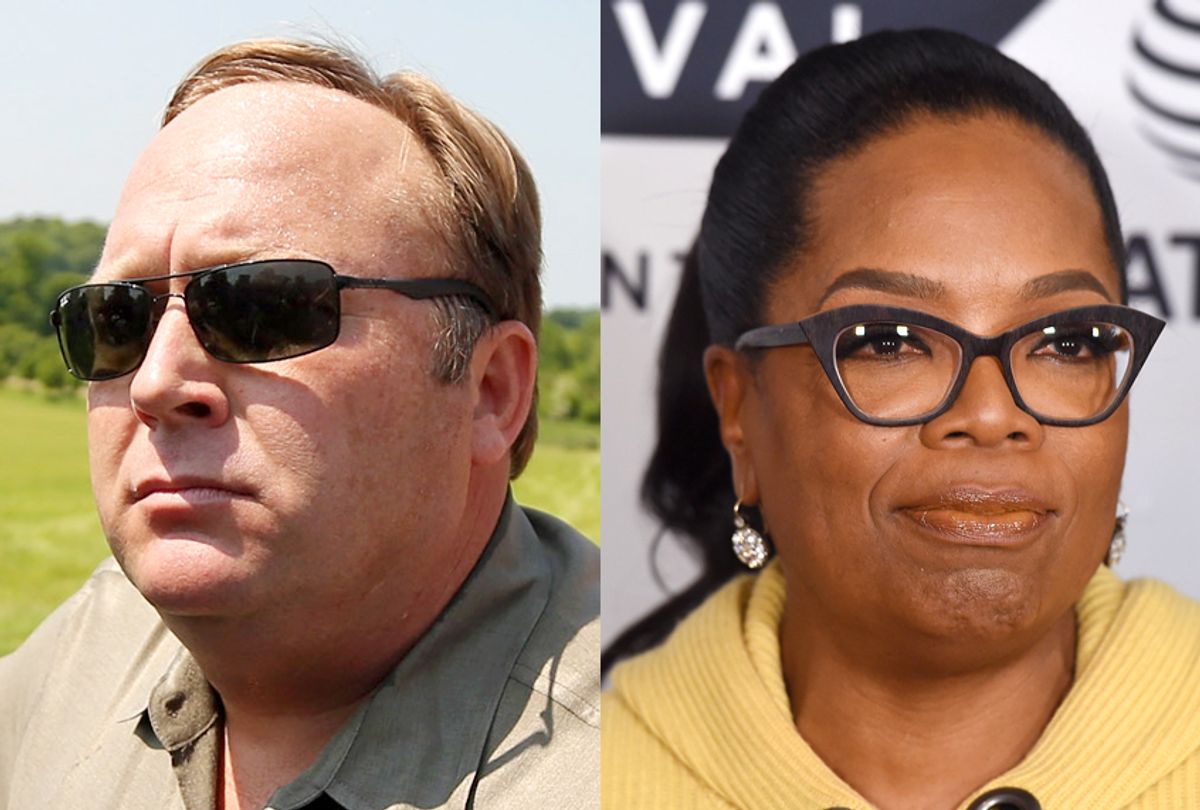 While accepting the Cecil B. DeMille Award for "outstanding contributions to the world of entertainment" at Sunday's Golden Globe Awards ceremony, Oprah Winfrey offered a genuinely inspiring, magnificent speech to viewers in attendance and at home.

"I've interviewed and portrayed people who've withstood some of the ugliest things life can throw at you, but the one quality all of them seem to share is an ability to maintain hope for a brighter morning, even during our darkest nights," she said. "So I want all the girls watching here, now, to know that a new day is on the horizon! And when that new day finally dawns, it will be because of a lot of magnificent women, many of whom are right here in this room tonight, and some pretty phenomenal men, fighting hard to make sure that they become the leaders who take us to the time when nobody ever has to say 'Me too' again."

It was such a stirring and graceful speech that many progressives and centrists saw potential in it beyond the #MeToo theme of last night's Globes. Some saw in it the framework for a run at the U.S. presidency, with CNN perhaps overly optimistically claiming that unnamed sources close to Winfrey say she is "actively thinking" about throwing her hat in the ring (this, despite the fact that she herself confirmed that she has no plans to run).

As much as it was enough to send otherwise reputable news outlets stroking their chins about the possibility of a Winfrey-led Democratic ticket, it was also enough for king of right-wing paranoia Alex Jones to launch a preemptive strike against the beloved media figure.

"Ladies and gentlemen," Jones said on the Monday edition of the "Alex Jones Show," "I have always broken down the fact that Oprah Winfrey is a top globalist, a top eugenicist, who pushes a one-world religion through her private foundation." He added, "She’s even got a new-age movie coming out to brainwash the children." (That movie, by the way, is "A Wrinkle in Time," starring Winfrey, Reese Witherspoon and Mindy Kaling. Directed by Ava Duvernay, it's due out in theaters March 9.)

Jones continued, "Well, they’ve readied [Winfrey] to run against Trump in 2020 and to fire that campaign up in about a year." To stave that off, Jones threatened to unmask the horrible, horrible truth about the entertainer and media giant. "We know the secrets about Oprah Winfrey that they don’t want you to know," he said. "There were Associated Press articles, London Guardian [sic] articles, ABC News articles, videos, as well, that they pulled eight years ago, seven years ago, when this news came out." The what, when, who and where of these articles is as of yet unstated by Jones and, knowing him, may never be.

"We’re going to break down why Oprah Winfrey will never be elected president of the United States," Jones said, "because of the skeletons in her closet."

"They want to call Trump a Nazi?" Jones said. "Look out, lady. We know what you’re designed to do. You’re the black face to carry out the enslavement of black folks and everybody else." What, if anything, Winfrey has done, other than advocate for equal treatment for all persons black, white or otherwise is unclear, but it seems we will be hearing more from Jones on this in the coming days . . . or not. Actually, there's a pretty good chance it's not.

Again, this is another sign that Jones, who used to be a general opponent of everything and anything attached to either the government or conventional thought, has become less a catchall conspiracist than a freelance advocate for President Donald Trump (albeit a particularly unhinged one). The racism and vocabulary may be a holdover from his days as a Fluoride-fighting, UFO-sighting Bilderberg scaremonger, but the direction and targets are those of a shill for the Executive Branch of the United States government. After candidate Trump shook the hands of both Jones and the "alt-right," these formerly outsider, anti-government voices have transformed themselves into manic factotums for the bureaucracy or the party, something that must call into question their dedication to their often-touted individualist, anti-conformist ideals.