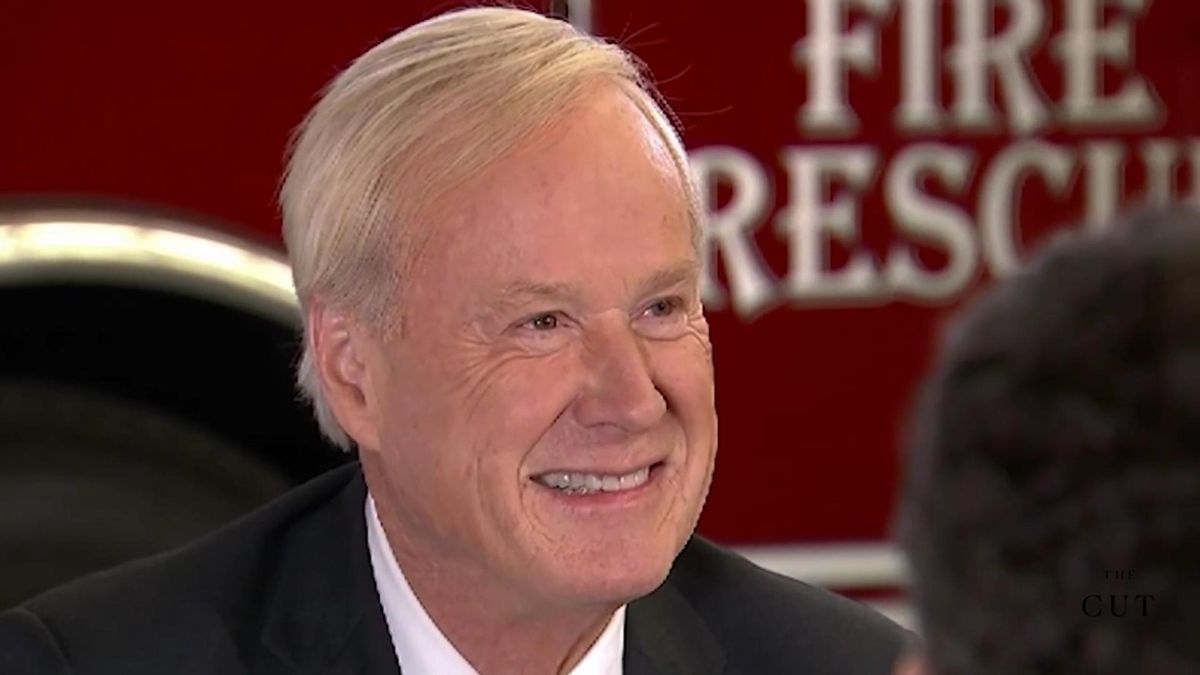 Longtime MSNBC fixture Chris Matthews apologized on Friday after a video was published of him making a joke about raping former Democratic presidential candidate Hillary Clinton.

Matthews made his misjudged, ugly attempt at humor as he and his camera crew prepared to interview Clinton at a campaign event on Jan. 5, 2016 in Iowa.

As his "Hardball" staff worked to get things ready, a jovial Matthews mocked Clinton as he requested a drink. “Can I have some of the queen’s waters? Precious waters?” he asked.

“Where’s that Bill Cosby pill I brought with me?” Matthews said as a staffer poured him the beverage. Impressed with himself, the MSNBC host guffawed at his horrible joke for several seconds.

At the time, the veteran comedian Cosby had been accused by numerous women of date rape through drugging their drinks.

"This was a terrible comment I made in poor taste during the height of the Bill Cosby headlines,
"Matthews said after New York magazine writer Noreen Malone confronted him with the clip. "I realize that’s no excuse. I deeply regret it and I’m sorry."

Matthews has provoked controversy before for his treatment of women, including a 2007 incident when he sexually harassed then-CNBC anchor Erin Burnett on his program, calling her "beautiful," a "knock-out," and urged her to lean in closer to the camera so he could leer at her:

In 1999, MSNBC had to give a $40,000 payout to a woman to whom Matthews had repeatedly sexually harassed.

Matthews also frequently questioned Clinton's ability to be the president and even grabbed her cheek on the air once after an interview.

He also, as the progressive watchdog Media Matters reported, has a long history of making unprofessional remarks to women about their appearance, sometimes even trying to flirt with them.

During the July 24, 2007 edition of "Hardball," Matthews referred to three women who had starred in political parody song videos as "these gorgeous creatures of god." As he interviewed them, he warned them that "you're giving me the peepers . . . be careful with the advances you are making with your eyes right now. I'm not a casting agent."

"You are — I'm not allowed to say this, but I'll say it — you're beautiful and you're smart. And you've got a huge radio audience," he said. Later on in the program he continued: "Can I sing your praises? . . .  I get in trouble for this, but you're great looking, obviously. You're one of the gods' gifts to men in this country. But also, you are a hell of a writer."

In a 1999 interview with Gennifer Flowers, the woman who reportedly had an affair with former president Bill Clinton while he was governor of Arkansas, Matthews repeatedly referred to her appearance.

"I gotta pay a little tribute here. You're a very beautiful woman, and I — and I have to tell you, he knows that, you know that, and everybody watching knows that; Hillary Clinton knows that. How can a woman put up with a relationship between her husband and somebody, anybody, but especially somebody like you that's a knockout? I don't quite get this relationship." After Flowers replied, "Gosh, you make me blush here," Matthews added: "[I]t's an objective statement, Gennifer. I'm not flirting."

In light of the huge momentum of the #MeToo movement to empower women who have experienced sexual harassment and the dismissal of major NBC Universal personalities due to misconduct allegations — Matt Lauer and Mark Halperin in particular — the revelations come at a difficult time for the media giant, something that may perhaps precipitate serious consequences for Matthews.

Matthews is not the first on-air staffer to have made a sexist joke at the expense of Clinton. In 2008, then-reporter David Shuster was fired after he accused Clinton of having "pimped out" her daughter Chelsea.