Joe Arpaio to speak at GOP dinner, proving the GOP is coming unraveled 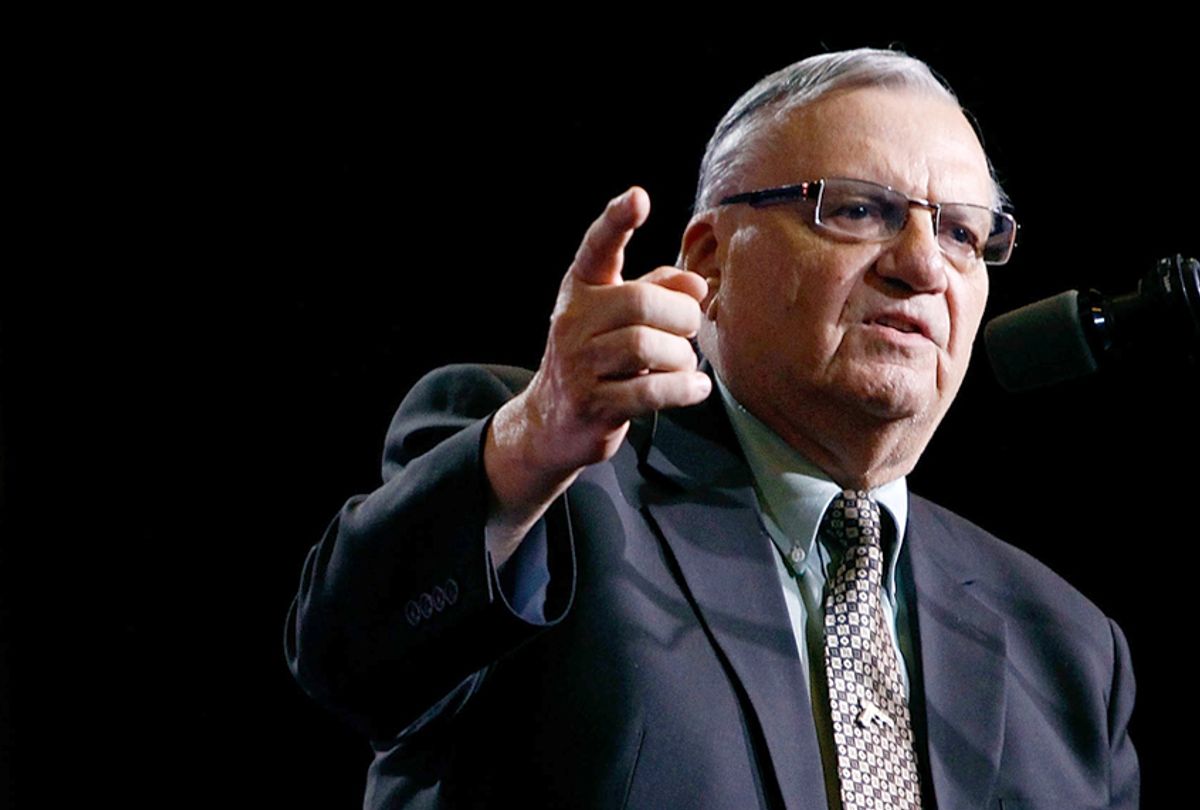 Prior to being pardoned by the president in August, former Arizona Sheriff Joe Arpaio was widely regarded as a toxic figure among the GOP establishment. Today's announcement that Arpaio will be featured as a guest speaker a Republican dinner in Nevada next month speaks to how tethered the GOP is to the whims of President Donald Trump

The 85-year-old disgraced former sheriff is set to speak at the Lincoln Reagan Dinner and Fund Raiser on Feb. 18, at the Carson Valley Inn in Minden, Nevada, the Associated Press reported. The news arrives after Arpaio declared he is running for the U.S. Senate seat in Arizona, which will be up for grabs after Jeff Flake retires at the end of his term next year.

The Douglas County Republican Central Committee will host the annual dinner and Arpaio will speak during the VIP Reception, the AP reported.

Arpaio and Trump often appear in lock-step, especially when it comes to immigration and spreading conspiracy theories regarding former President Barack Obama's birth certificate. The president pardoned Arpaio, who was convicted of criminal contempt of court after defying a court order, in late August and has offered praise of Arpaio's controversial law enforcement career.

While Trump seems to have conceded in his racially-charged birther crusade against Obama, Arpaio never stopped. Just last week Arpaio said there's "no doubt" that the former president's birth certificate was fabricated.

"We have the evidence. I’m not going to go into all the detail, but yes, it’s a phony document," Arpaio said.

The Trump-Arpaio alliance raises problems for the Republican Party, which has often failed to condemn or at least control chaos from within. With Arpaio heading full-steam into a Senate race in a red state like Arizona, the Republican Party is now forced to give its imprimatur to Arpaio.

Republicans have often sought to separate themselves from overt far-right caricatures, while preferring the stoic family-values approach. Regardless, both far-right, anti-immigrant conservatives like Trump and Arpaio, and more "traditional" family values neocons in the GOP like Jeff Flake, seem to govern pretty much the same. To wit: just this week, Senator Flake announced his intent to compare the president to Soviet dictator Joseph Stalin in a Senate floor speech, though he has supported almost all of Trump's agenda. As men like Flake depart because they feel their party has been hijacked, they have actually just made the journey for men like Arpaio much easier.