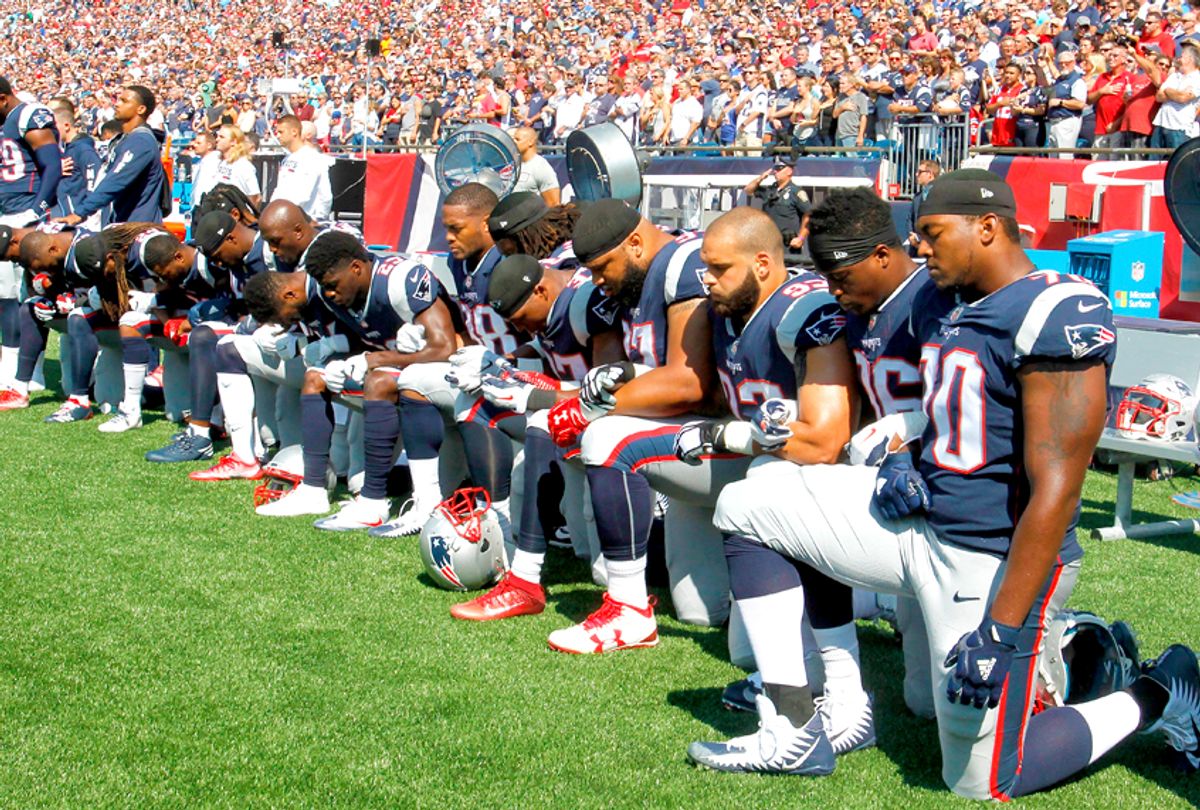 The NFL has rejected a veteran's group bid for a full-page ad in the Super Bowl LII paper programs. The ad, proposed by American Veterans (AMVETS), included the slogan "Please Stand," a reference not only to the National Anthem played at the beginning of all professional sporting events in the United States, but the ongoing kneeling protests during the performance of the anthem during NFL games. The protests themselves exist to bring attention to the high number of unarmed black people killed by police officers as well as other racial disparities in the American criminal justice system.

AMVETS, self-billed as a non-partisan organization that advocates for issues relevant to veterans of the U.S. armed services, was attempting to place the ad in the program for $30,000. The advertising in the program is not curated by the NFL itself, but rather the third-party vendor contracted to supply them for attendees of the Super Bowl, though the NFL still has approval over its content.

On Monday, AMVETS national commander Marion Polk released a letter that had also been delivered to NFL commissioner Roger Goodell. "Freedom of speech works both ways," it read. "We respect the rights of those who choose to protest as these rights are precisely what our members have fought — and in many cases died — for. But imposing corporate censorship to deny that same right to those veterans who have secured it for us all is reprehensible and totally beyond the pale."

Joe Chenelly, AMVETS executive director, offered a less fiery comment which downplayed the political relevance of the ad. "The protests are very much out of our purview," he noted. "We were not looking to comment on those. This is part of our Americanism program."

In response, the NFL has released a series of statements indicating its reticence to wade back into what has already been a contentious issue for the league. Already, much of the early part of its season was taken up with calls for boycotts, a slew of threats against teams and players and criticism from President Donald Trump tied to the NFL's inability to stop players from protesting at games. Ultimately, teams proffered some "unity"-themed demonstrations and the league allowed the players to kneel during the anthem after threatening to suspend them for doing so.

An NFL spokesperson told USA Today, "The Super Bowl game program is designed for fans to commemorate and celebrate the game, players, teams and the Super Bowl." He added, "It’s never been a place for advertising that could be considered by some as a political statement. The NFL has long supported the military and veterans and will again salute our service members in the Super Bowl with memorable on-field moments that will be televised as part of the game."

That said, he added that the Veterans of Foreign Wars will have an ad in the program featuring the tagline, "We Stand for Veterans" — similar in spirit to AMVETS' proposal, but less direct in its messaging.

About the AMVETS ad, NFL spokesman told USA Today, "We looked to work with the organization and asked it to consider other options such as 'Please Honor our Veterans.' They chose not to and we asked it to consider using 'Please Stand for Our Veterans.' Production was delayed as we awaited an answer." He added, "As the program was going to production, the organization asked about including a hashtag and was informed that approval would not be provided in time and was asked to approve the ad without the hashtag. The organization did not respond and the program ultimately went into production to meet deadlines."

This is, yes, confusing, but speaks to the prickly, fluid nature of the issue at hand. As noted the league itself has doubled back on its own policies concerning player protests with commissioner Goodell himself alternately condemning and praising the demonstrations that were first started by former league quarterback Colin Kaepernick (arguably, Kaepernick is no longer employed by the NFL due to exactly this). While some owners threatened to bench players who knelt, others supported them.

In the public, the reactions to the protests have been equally mixed. While many support the demonstrations, others — including the president — frame them as an insult to the American flag and U.S. service members. Calls for a crackdown on them have been constant and many cite them as a reason ratings for NFL broadcasts continue to fall (though, in actuality, there are multiple factors at work there).

Currently, it is unknown if any players from the Philadelphia Eagles or the New England Patriots will kneel during the singing of the National Anthem at Super Bowl LII on February 4.