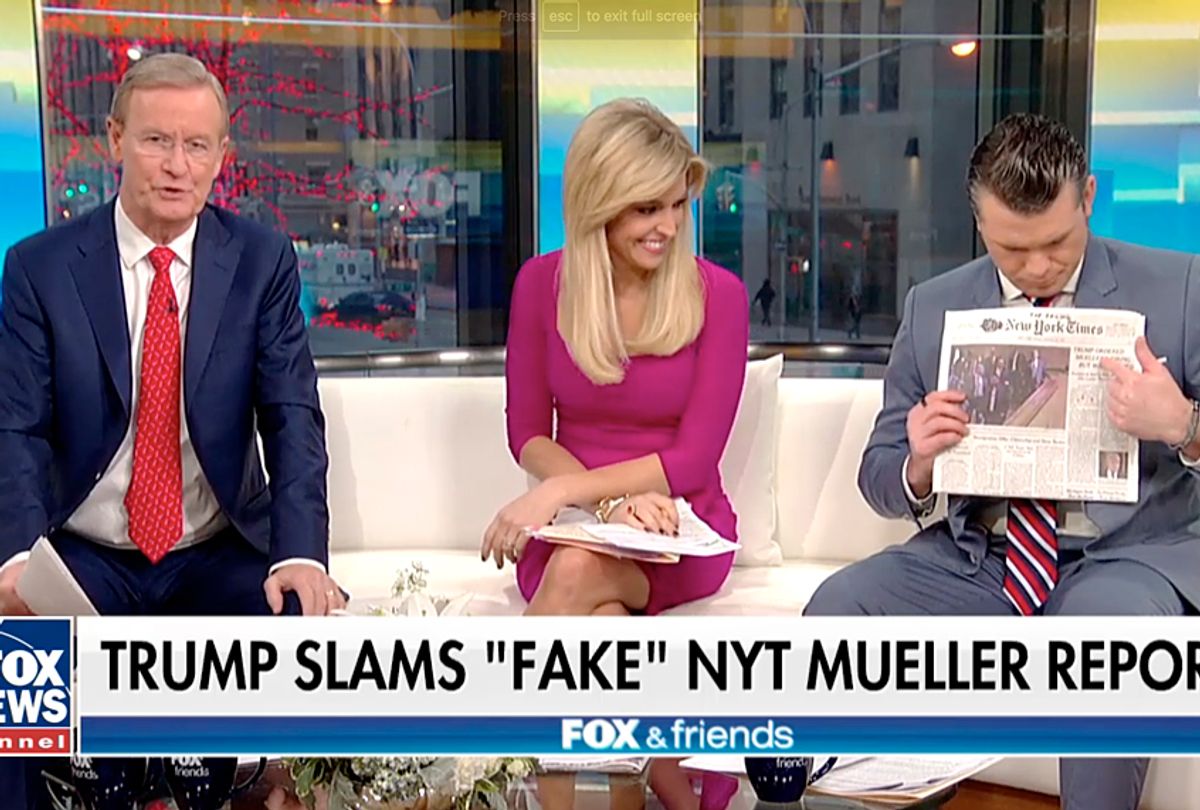 One of the biggest stories of the last 24 hours is that President Donald Trump tried last summer to fire Robert Mueller, the special prosecutor in charge of investigating any connections between Trump and Russia before the 2016 election (as well as any crimes that may have been committed since then). That signaled to many the the president had either tried to commit obstruction of justice, or really and truly did.

What did it signal to Fox News? Well, not much of anything really. See, while the major news networks focused on a story that could lead to a constitutional crisis in the coming months and years, Fox News had other priorities.

To be fair, Fox did cover the blockbuster New York Times story as quickly as possible, noted Media Matters' Matthew Gertz. But then its hosts and correspondents quickly pivoted to other, more pressing matters.

Gertz has been an avid and thorough chronicler of "Fox & Friends," essential work given that the show is a favorite of Trump's. Gertz wrote earlier this month that the morning news show has influenced many of Trump's Twitter decrees, which seem to be the president's stream-of-conscience responses to what's playing on the television in front of him.

The morning show's audience may not have included Trump this week — the president was in Davos, Switzerland — but it did cater to Trump's biggest defenders. To them, the show offered an amazing response: "Do you even care? Something you Probably do care about is immigration."

Trump's response was treated as gospel, and "Fox & Friends" delivered a dueling message: The report was fake news, but Trump can do it because he's the president.

It's an astonishing move for Fox, given that it has dedicated uncounted hours to covering what it alleges to be another obstruction of justice case: Then-Attorney General Loretta Lynch's 2016 airport tarmac meeting with Bill Clinton. At the time, many at the network claimed it was part of a nefarious plot to save Hillary Clinton from the jaws of the Bengazi investigation.

Since then, Fox News has transitioned to being a 24/7 anti-Mueller watchdog, with host and Trump friend Sean Hannity calling his investigation "one giant pattern of bias and abuse of power." Hannity was quick to gloss over reports that Trump wanted to fire the man investigating him Thursday night.

This morning, "Fox & Friends" made sure to remind its viewers who America's true enemies are: Hillary Clinton, Barack Obama and other liberal politicians.