A year later, 5 women living in a red state weigh in on their regrets and hopes in the Trump era 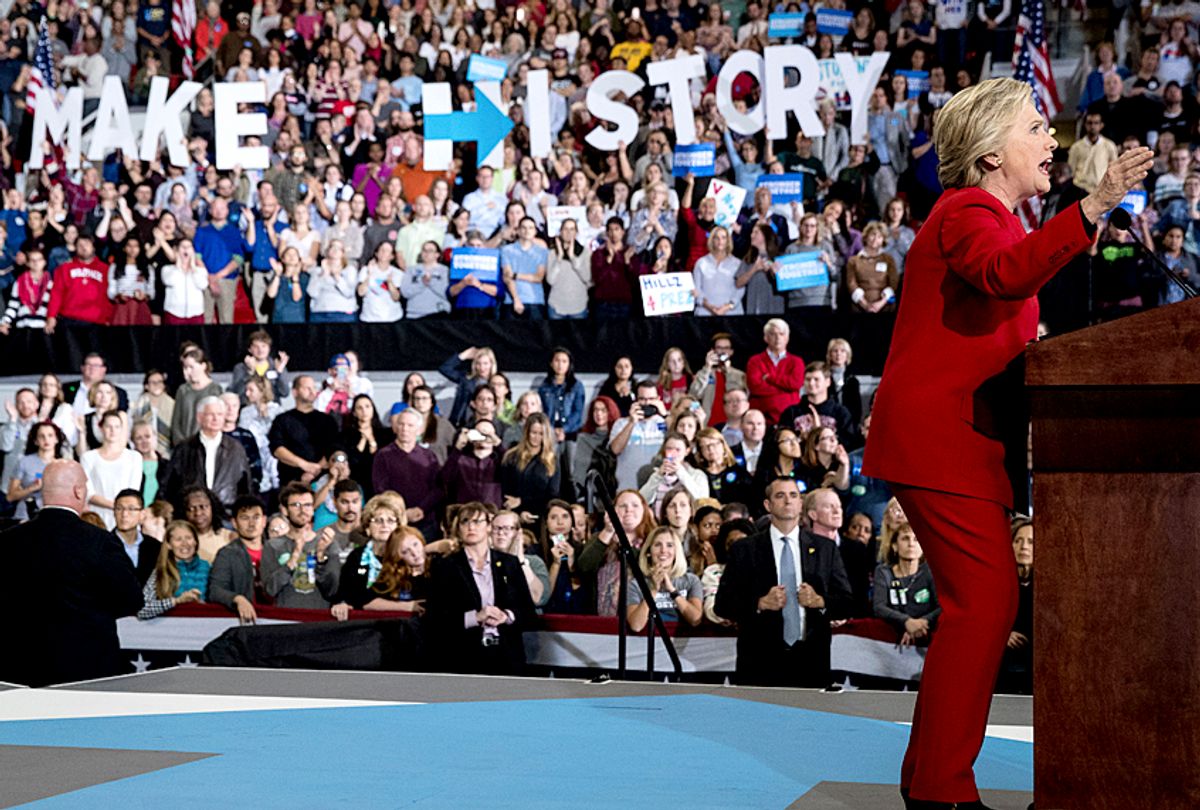 “There was just something different about her,” Amy Catherine, a medical practice office coordinator and Sophia, North Carolina resident, recounts. The sentiment is not unique. Hillary Clinton, like many politicians, is stirring. But Clinton's ability to stoke optimism and hope in a bleak world has helped both the former candidate and the women who voted for her to continue to practice the hopefulness she preached, one year later.

Hillary Clinton lost the presidential election that would have made her the first female to serve as the U.S. commander-in-chief. Instead, Donald J. Trump, a businessman whose tactics of unshielded vulgar language and misogyny pierced through his entire campaign, came out as victor. He won the working-class white female vote and scored 45 percent of the college-educated white female vote. But while race secured the POTUS his position, 28 percent of college-educated Latinas also checked their ballot for the Republican nominee on November 8, 2016.

Trump marked 30 states red, and North Carolina was one of them. A long-time battleground state for politicians, 54 percent of its women showed up on election day, and of those women, 52 percent of them voted for Hillary Clinton. Catherine was one of them. “I teared up when I checked her name. I stood there for a second and took it in. This was historic.” Like Catherine, Nancy Hayes, a digital marketing specialist residing in Asheville, NC, cast her ballot for the first major-party female candidate. Her first vote was in 1972 for George McGovern. Now a mother of three, she found this election — and more importantly, the loss that accompanied it — harder than she anticipated. “I saw my daughters in tears and beyond upset with what they felt was a stolen election. It was obvious to me and my daughters that she [Clinton] had the best qualifications to be president. I tried not to despair, to find a silver lining, but I never did.”

Clinton's rise to Democratic nominee was a marathon accompanied by a well-executed training plan. But her supporters' false start in assuming her win was assured kept many North Carolinians at home on election day. Toccara Jefferies, a management trainee living in Charlotte, NC, voted for Clinton in her third presidential election. “At first, I didn’t take this election as seriously as previous elections, because I honestly thought this election was a joke. I guess I was overly confident about her winning that I lost focus on the numbers.”

It was clear from the beginning that the outcome of this election would stir emotion regardless of who won, but for new mother and Henderson County resident Savanna Poole, voting for Hillary Clinton was one of the most meaningful experiences of her life. "My grandmother and mother raised me to be an outspoken feminist in high school. I founded a Women's Studies club, and had scathing backlash from the men, even faculty members at my school. Like other young women, I had been exposed to sexism my whole life, but that was my first experience on a large scale. Women, particularly women of color, have an uphill battle. Voting for the first female candidate was so empowering. I could not wait for my daughter to be born into a country that had a woman as the leader of the free world."

Motherhood was a central theme that ran through the Clinton campaign, but not your apple-pie-and-dinner-on-the-table-by-five variety. For Catherine, it is what made her vote all more important. "To stand there and vote for her — to look at her name on the ballot and think, 'Despite all of it, all the attacks, and all the attempts, she's still here' — in some way, I couldn't help but think she endured all of that and survived all of that for me. I even went so far as to send her an email after the first debate. I told her, 'I think for the first time this country has a female candidate, because what this country needs is a mother, not a father.'"

And for mother Sarah Hunter, a French and art teacher in Weaverville, NC, this loss was not easy. "Her loss, I am a little embarrassed to admit, was pretty awful for me physically, mentally and emotionally. I had always tried to prepare myself ahead of time that Hillary might lose, but ultimately, I trusted the experts and was pretty confident. The day after there was a lot of crying. The week was filled with yoga. I think I went to yoga every day that week because I couldn't breathe."

It's a little over one year since the inauguration, and Donald J. Trump's time in the Oval Office has left many feeling the country is more divided than ever. For Poole, she's seen it in her own family. "The day of the inauguration, I got into the biggest fight I've ever had with my dad. He's a huge Trump supporter and the fights continued into the summer. My dad and I are no longer Facebook friends and we never discuss politics. I think that social media has been the hardest part of this election. Typically, the Trump supporters in my family don’t bring up politics in person. However, I do have to see their hateful rhetoric on social media. Eventually, I hid all their stories. The most difficult part is knowing where to draw the line. I love this person, they're wonderful to my family, but they're also a racist. What do you do with that?"

While the outcome of the election has left analysts and voters still puzzled as to what went wrong, the ways in which women showed up and responded have been staggering. EMILY's List, an American political action committee that aims to help elect pro-Democratic female candidates to office, has found that since election day, 25,000 women have said they want to run for office, and 8,000 have signed on to help them. In November, Virginia elected its first openly transgender state legislator, and the state also saw their 100 members of the House of Delegates go from 17 women to 30. The 2017 Women's March was reported as likely the largest single-day demonstration in recorded U.S. history, an event that Hunter felt was imperative she attend. "I went to the Women's March in D.C. and my family really didn’t want me to go; they thought it was dangerous. I felt it was essential."

So, where are we headed now, and what do these women feel optimistic about?

One thing is certain, the pendulum has swung far with a Trump victory, but for mothers like Hayes, Poole and Hunter, they're hopeful that change is coming. Poole notes, "Sometimes I think it takes extreme situations for people to wake up. I think the resistance will continue to grow and American politics will be forever changed." Hunter, meanwhile, says that her opinions and thoughts on our current commander-in-chief should not be something her children echo. "My kids don't hate Trump. I don't want them to hate anyone. I hear young kids from time to time talk badly about Trump and it rubs me the wrong way. They are just repeating what their parents say and I don't think it's healthy." Jefferies simply says, "I really do hope we make America great again, by learning and learning."

The way in which women voted in the 2016 Presidential election was complicated and divisive. The outcome was shocking, and the ripple effect that has begun in the wake of the results has only made a splash in the pond. But for the women of the red state of North Carolina who showed up and voted for Hillary Clinton, it was clear they cast their ballot with the next generation in mind. "My hope for them is that they will want for themselves the future and the world I know they deserve," Catherine says. And to achieve that, we must let them roar.