Antifa vs. Milo Yiannopoulos: Who won?

It's been a year since anti-fascist protests shut down a Yiannopoulos gig at UC Berkeley, to much media criticism 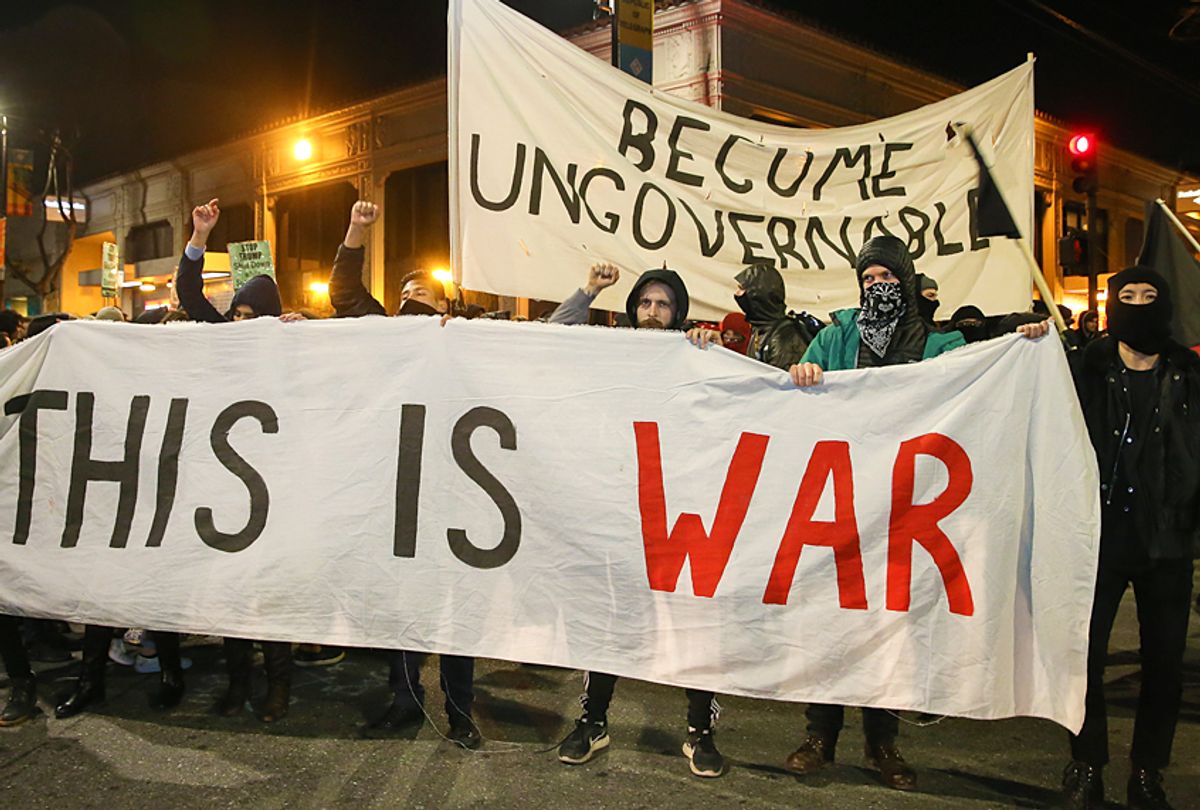 A year has passed since black-clad anti-fascists smashed windows and launched fireworks to shut down right-wing provocateur Milo Yiannopoulos’ scheduled speech at the University of California, Berkeley, on February 1, 2017. Unsurprisingly, pundits immediately condemned these “masked hoodlums who arrived from off-campus” for denigrating Yiannopoulos’ “freedom of speech.” The year of conflict on campus that ensued around speakers like Yiannopoulos, Richard Spencer and Charles Murray provoked fascinating debates about speech rights that tap into our most deeply held principles. But pundits also objected to the “no-platforming” of Yiannopoulos for another reason: that “such actions turbo-charge his fame.”

Berkeley witnessed “self-defeating violence” that was a “gift” to Yiannopoulos, according to The Chicago Tribune. A column in The New Yorker argued the protest was “a tactical error” that “served his ultimate interests.” “Milo Yiannopoulos feeds on your violent protests,” The Daily Beast claimed, because they allowed him to cultivate his “image as a victim of liberal intolerance.” Ultimately, “resorting to violence is particularly stupid,” The Telegraph asserted, because it plays into Yiannopoulos’ “oh-so-obvious trolling.”

As surely as the sun rises in the east, smashing windows to shut down a self-described “provocateur” was allegedly destined to propel Milo Yiannopoulos into the media stratosphere. But did it? A year is a reasonable enough sample size to start assessing the real effects of the Berkeley protest and the accuracy of pundit predictions.

The media frenzy that followed on the heels of the Berkeley protest seemed to confirm the assumption that bonfires benefitted Yiannopoulos. Pre-orders of his book "Dangerous" skyrocketed and Bill Maher fawned over him on "Real Time." Overnight, Milo Yiannopoulos had become a household name.

Yiannopoulos’ fortunes started to change a little over two weeks later, however, when a video surfaced showing him making pro-pedophilia remarks. Immediately this revelation caused Simon & Schuster to terminate his lucrative book deal, the conservative conference CPAC to cancel his planned speech at its annual event and hard-right news site Breitbart to urge his resignation from his editorial post. Though this fiasco was largely self-inflicted, the timing of the release of this 2016 video shortly after the Berkeley protest suggests that enhanced scrutiny accompanied his newfound fame. As the self-described “supervillain of the internet” was about to be welcomed into the conservative mainstream at CPAC, the conservative “Reagan Battalion” site unearthed his pedophilia comments. Yiannopoulos seems to have flown too close to the sun. Despite the media predictions that militant protest would “only help” his brand soar, it became painfully obvious that not all publicity is good publicity when you have skeletons in the closet.

More skeletons were unearthed when Buzzfeed published an exposé revealing Yiannopoulos’ links to prominent white nationalists and neo-Nazis. As the months fell off the 2017 calendar, Yiannopoulos was denounced by his former mentor Steve Bannon, defunded by the right-wing Mercer family and booted out of his role as a weekly contributor for The Daily Caller after one column. (The Daily Caller editor who brought him on was fired as well.) Even his own lawyers abandoned him in his suit against Simon & Schuster for terminating his book contract.

The impact of the Berkeley demonstration and other anti-Milo protests is most obvious when we examine the trajectory of Yiannopoulos’s speaking engagements. From February 2016 through the infamous Berkeley incident on February 1, 2017, Yiannopoulos scheduled approximately 61 public speaking appearances (most for his “Dangerous Faggot Tour”). Of those 61, twelve were shut down by protesters or cancelled by administrators for security concerns. Notable examples other than Berkeley included Black Lives Matter protesters who confronted Yiannopoulos at DePaul University in May 2016 (a planned return to DePaul in September was cancelled by the administration) and students and allies at UC Davis who successfully blocked the entrance to an event Yiannopoulos had scheduled with Martin Shkreli in January 2017. Another seven of his talks were cancelled for logistical reasons. At least five of the 42 that occurred were interrupted in one way or another: Rutgers students smeared themselves with fake blood, UCLA students attempted to block the entrance to the event, and University of Minnesota, Twin Cities students interrupted him with air horns.

How did the media spectacle of bonfires and fireworks at Berkeley affect Yiannopoulos’s ability to organize future speaking engagements? Robert Schlesinger, writing in U.S. News & World Report, was confident back in February 2017 that the actions of “the masked vigilantes . . . no doubt guaranteed another dozen speaking engagements” for Yiannopoulos. Actually, he failed to deliver even that modest number of public talks over the next year. Though Yiannopoulos attempted to schedule about 16 public talks between February 2, 2017 and February 1, 2018, six of those planned talks were cancelled at universities like San Diego State or private venues like the Patio Theater in Chicago because of a mix of popular pressure and “security” concerns. The United Liberty Coalition attempted to bring Yiannopoulos to Phoenix, but they gave up after they were rejected by 62 different venues. Eight of his talks, including all seven in Australia, were listed as occurring in a “secret location” to deter protesters. One of the only openly advertised events Yiannopoulos managed to organize was the woeful “Free Speech Week” at Berkeley in September 2017, which collapsed into a 20-minute talk in front of an audience of 50-100.

This dramatic decline in his public appearances over the past year is directly correlated with the precedent set in February 2017 at Berkeley. Love it or hate it, images of targeted property destruction in northern California provided a powerful incentive for venues to avoid potential headaches.

Reasonable people will disagree about the influence of the Berkeley protest on Yiannopoulos’ plummet. What is not debatable, however, is that media predictions about the inevitable ascent of Milo Yiannopoulos after getting shut down in Berkeley were wrong. A year later, already banned from Twitter, Yiannopoulos now has no access to media platforms like Breitbart and the Daily Caller, no publisher for his books, no mega-donors to bankroll him and dwindling opportunities for public speaking. In an age of social media and 24-hour cable news cycles, Yiannopoulos is already old news. The short-lived nature of his stardom is even evident on Google Trends which shows that after spiking in early 2017, the frequency of subsequent Google searches for his name have plunged to 2016 levels.

Yet, this discussion misses the most crucial aspect of protests at Berkeley, Rutgers, DePaul, UCLA and other campuses. Pundits asked how protests would affect Milo Yiannopoulos’ public profile. They failed to ask more important questions: How do Yiannopoulos’ events and the rhetoric he spews endanger those he targets, and how can they fight back? How these protests affect Yiannopoulos (or other far-right figures like Richard Spencer or Ann Coulter) is interesting; how they affect resistance to the far right is essential. Lost in such debates is the astounding mobilization over recent years of a broad anti-racist movement encompassing Black Lives Matter groups, labor unions, faith communities, immigrants’ rights coalitions, anti-fascist networks, feminist collectives and LGBTQ organizations that will not just ignore attempts to make white supremacy great again. We must situate the property destruction at Berkeley, heckling at UMASS Amherst, the air horns at Minnesota, the blockade at UC Davis, and other acts of disruption within this process of movement-building to understand their full effect.

Strategic and tactical debates rage within these circles, as they do in all movements. But by smashing windows rather than allowing Yiannopoulos to out undocumented students, as Berkeley officials claimed he was about to do, by dousing oneself in fake blood rather than let him promote rape culture, by barricading the entrance to his event rather than give him an opportunity to verbally attack a transgender student (as he had at the University of Wisconsin at Milwaukee), these students and their allies prioritized the safety of those under attack and expanded the range of tactics available to resist the far right.

More fundamental than the tactical repertoire, however, is a shared understanding that it is dangerous to allow the far right to normalize racism, xenophobia and homophobia (for even the openly gay Yiannopoulos penned an article title “Gay Rights have made us Dumber, It’s Time to Get Back in the Closet”). If we truly believe that Black Lives Matter, then we cannot accept the discursive legitimacy of anti-black racism that argues otherwise. If we are committed to taking seriously those who have spoken out to say #MeToo, then we cannot shrug off the anti-feminist promotion of patriarchal values as a simple difference of opinion. We may disagree about how to resist, but resist we must.

This requires expanding our view beyond the capriciousness of celebrity. As long as there is demand for outlandish misogyny or Islamophobia, the next Milo will step up to bask in the spotlight. Protest is not just about influencing an intended target, but building power.

Would shutting down Milo Yiannopoulos at Berkeley in February 2017 propel him into stardom? A year later we can see that pundits offered us the wrong answer. Yet, if we focus on resistance, we can also see that they were asking the wrong question.

Mark Bray is a historian of human rights, terrorism, and political radicalism in Modern Europe who was one of the organizers of Occupy Wall Street. He is the author of the nationally-bestselling "Antifa: The Anti-Fascist Handbook," as well as "Translating Anarchy: The Anarchism of Occupy Wall Street," and the co-editor of "Anarchist Education and the Modern School: A Francisco Ferrer Reader." His work has appeared in the Washington Post, Foreign Policy, Critical Quarterly, Boston Review, and numerous edited volumes. He is currently a lecturer at Dartmouth College.