The Russia election investigation is important — but it's not everything 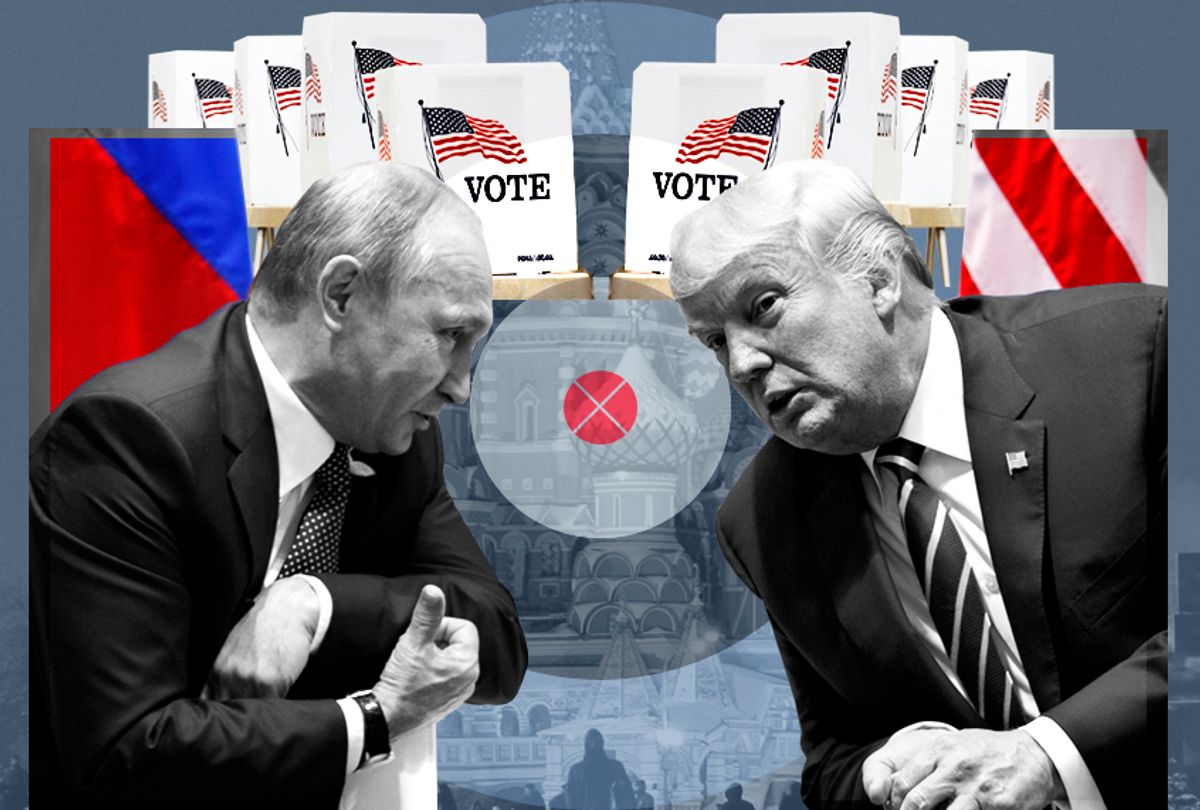 Remember when the right couldn’t stop obsessing over Benghazi? The attack on the U.S. embassy on September 11, 2012, led to a right-wing witch hunt aimed at blaming President Barack Obama and Secretary of State Hillary Clinton for misrepresenting the attacks to the U.S. public and for missing signs that could have prevented it. The critical thing to remember is that shortly after the attacks, right-wing media covered Benghazi in a constant loop. As Stephen Colbert parodied it for “The Colbert Report” in late November 2013, it was “Benghazi, Benghazi, Benghazi.” Well guess what? The right’s Benghazi is now the left’s Russia.

I know what you’re thinking. You’re thinking, “but the Russia story really is a scandal and Benghazi was just a bunch of hot air.”

Maybe you are jumping up and down in glee over the announcement from Special Counsel Robert Mueller's office Friday that a grand jury indicted 13 Russian nationals and three Russian entities for alleged interference in the 2016 presidential elections and efforts to boost the candidacy of Donald Trump.

But it is precisely because there is evidence of Russian tampering in elections and Russian ties to Trump that the left has to stop obsessing about it. In fact, that is why the Russia obsession is actually worse than the Benghazi one, because the elements of truth have allowed the hyper-focus on Russia to turn into a full-blown obsession — one that is taking up enormous bandwidth in the news media and blocking out attention to other critical issues. Just think, for instance, of the stupidly enormous amount of coverage of the so-called Nunes memo.

Here are five reasons we need to stop binging on Russia scandal news so we can pay attention to the bigger picture.

Let’s start by agreeing that we should figure out the scope and extent of Russian involvement and the degree to which the Trump team was involved. The problem, though, is that the obsession with Russia is keeping us from paying attention to the various sources of information-meddling that have nothing to do with Russia.

We know that the so-called fake news that cropped up during the election cycle had a range of sources, some of which, like the work of hoax news writer Paul Horner, was driven by money and not ideology. Horner was raking in about $10,000 a month for his fake stories. The Macedonian teenagers were also in it for the cash.

But even more important is the fact that ideological motives for messing with voters were not limited to the Russian government. Take the case of Romanian Ovidiu Drobota, the 24-year-old behind Ending the Fed, who “was proud of the role he played in building support for Trump” by posting hoax stories to Facebook.

The top of the ideological food chain, however, has to be Roger Stone. There is ample evidence of various ways Stone has contributed to the far-right propaganda ecosystem. But the news media and the U.S. public seem entirely uninterested in him. He testified in front of the House Intelligence Committee last fall about his communications with Guccifer 2.0, the “Russian hacker” believed by U.S. Intelligence to be an agent of the Russian FSB (aka KGB), and has mentioned the possibility of the investigation's ongoing interest in his activities. Stone may be blocked on Twitter, but we know that he continues to try to weaponize information at the service of a far-right agenda. Yet we hear more about Putin than we do about him.

We would also do well to remember the various times that the United States has meddled in elections across the world. Freaking out over the idea of Russia attempting to influence voters is stunningly tone deaf to the experiences of voters across the globe who have watched the United States play a role in their democracies.

The obsession with Russian propaganda isn’t just an entertaining way for the U.S. public to revive Cold War logics; in the end, it is a disaster for our democracy. One of the biggest flaws to propaganda hype is that it gives the left a pass from taking seriously the policy flaws in the Hillary Clinton campaign.

There is little evidence that the Russian propaganda — even if it existed in its most extreme iterations — actually changed the outcome of the election. As anyone who has studied confirmation bias knows, propaganda only works on an audience inclined to believe it. Obsessing over propaganda as the problem allows us to avoid talking about why the propaganda found an audience in the first place. And blaming an external villain — whether it is Putin or misogyny — is a convenient way of avoiding taking any responsibility for a botched campaign and an unappealing policy platform.

Yet it turns out that it wasn’t propaganda that decided the election. It was policy.

A study released last December by David Winston and The Voter Study Group found that the deciding factor in the 2016 election was policy — not demographics, not misogyny and not Putin. Winston finds that, despite the media’s attention to Twitter feeds, emails, hackers and coarsening political discourse on both sides, the main concerns, as ranked by voters, were jobs and the economy.

Winston further discovers that there was a real breakdown in issue priorities for Democratic voters: “One of the most surprising findings from the cluster analysis was a significant issue divide between the Democrat/Independent liberal elites and Democratic-leaning working class. The data showed the division between the two Democratic groups was much bigger than the issue divide within the Republican Party. These two Democratic clusters are clearly split over how to prioritize the economy and jobs, and it played out to the party’s detriment in the last election.”

This issue, of course, is the elephant in the DNC’s room. The DNC has thus far resisted taking seriously the need to reform. And they have refused to acknowledge the possibility that Clinton was simply not appealing to a lot of voters focused on jobs and the economy. Even worse, the Russia propaganda story allows the DNC to avoid dealing with the reality that the 2016 elections revealed the truth that the party is an oligarchy populated by insiders, corporate capitalists, cronies and superdelegates.

3. Beware of a McCarthyism of the left

One of the best examples of how Russia hysteria has overtaken our good senses is the way that comedian Lee Camp has been demonized because his satire show, “Redacted Tonight” is on Russian government-funded RT America. The basic idea is that because the show airs on a Russia-sponsored network, it must be Russian propaganda.

A recent NPR piece going after Camp displayed all of the various ways that this hysteria is both illogical and intellectually regressive. Camp himself did an excellent job of unpacking all of the faulty logic and poor reasoning in the NPR piece and his analysis is worth a read.

But it does raise a larger question. Has the Russia hysteria created a resurgent McCarthyism of the left, where an anti-corporate, progressive, activist comedian is assumed to be a Russian stooge?

I researched a number of shows on RT America and found that, apart from the news programming, which has a clear Russia-oriented take, there were a number of shows that thrived on the channel for the simple reason that they don’t have to deal with blowback from corporate advertising.

Camp is joined by other progressive voices like former MSNBC host Ed Schultz and Pulitzer Prize-winning journalist Chris Hedges. Because their shows are principally anti-capitalist and because they refuse to play party politics in predictable ways, they thrive on a network that doesn’t mind their critical stance and isn’t beholden to U.S. corporate interests.

As Camp explained in the opening of one episode: “People [ask] me why 'Redacted Tonight' is on RT and not another network . . . I’ll tell you why. My anti-consumerism, anti-two-party-corporate-totalitarianism isn’t exactly welcomed with open arms on networks showing 24/7 Walmart ads.”

But rather than examine shows like that of Camp’s with critical nuance, the trend has been to lump him and his fellow progressive voices on RT America onto a collective Russia-themed blacklist. In contrast, no one asks anchors on NBC how it feels to work for a weapons contractor.

4. We will all turn into Alex Jones

If you tune into the evening news and substitute “Benghazi” for “Russia” it might help offer the distance needed to see how completely obsessive this rhetoric has become. All of the so-called center and left leaning broadcast news outlets are spending a disproportionate amount of time on the Russia investigation.

But it’s not just the bandwidth of Russia-gate; it’s the tone. More and more the coverage takes on the paranoid conspiracy theory tenor of "alt-right" media. Sure, we have yet to have Anderson Cooper spit and scream at the camera like Alex Jones, but the almost gleeful way that some news figures cover the story is evidence enough that the excitement over Russia-gate has gone over the edge.

That mainstreaming of conspiracy theory thinking is exactly what Jordan Klepper parodies on his comedy Central show “The Opposition.” One of the great insights of Klepper and his team is that conspiracy theory mindsets are becoming normalized.

Sure, as I’ve mentioned, we need to get to the bottom of the exact extent of Russia’s involvement. But does it have to be so shrill? Does it have to be discussed as though it were a soap opera-sized scandal? Distilling the crisis of Trump into Russian interference is not just delusional; it’s making us all seem just like the fringe "alt-right" figures we condemn for hyperbole and hysteria.

5. Fantasizing about Trump’s impeachment doesn’t help us prepare for what’s next.

There is a viral video that imagines a Hollywood-like scene of Trump and his cronies going down in a Russia-gate arrest. The video is fittingly set to Matt Monro’s “From Russia with Love,” and it’s titled “It’s Mueller Time! Trump Administration Season Ending.”

I confess to having watched it at least five times. It’s funny and well-produced, and it offers a super-satisfying fantasy movie ending to the Trumpocalypse.

But that’s the point. It’s a fantasy. It’s fun to watch, but it isn’t how the Russia story will shake out. Even if there are arrests and even if there is an impeachment, this country is going to be left with Mike Pence and the kakistocracy that Trump and his minions will leave behind.

Even more important, any consequences to the Russia investigation aren’t going to fix the fact that Trump got 62,979,879 votes too many. Don’t forget that a Quinnipiac University poll recently showed that Republicans by 72 to 22 percent say that Trump is a good role model.

The point is that the attention to the Russia investigation allows us to fantasize that there can be justice and that there can be integrity in our system without any of us doing anything more than watch Robert Mueller fix it.

The real news isn’t the Mueller investigation; it is that, as Jimmy Carter recently explained, the United States is an oligarchy. So, the longer we try to blame the Russians for our woes, the longer our democracy will wither.