Trump's unconditional support for law enforcement raises questions about accountability, and an expansion of powers 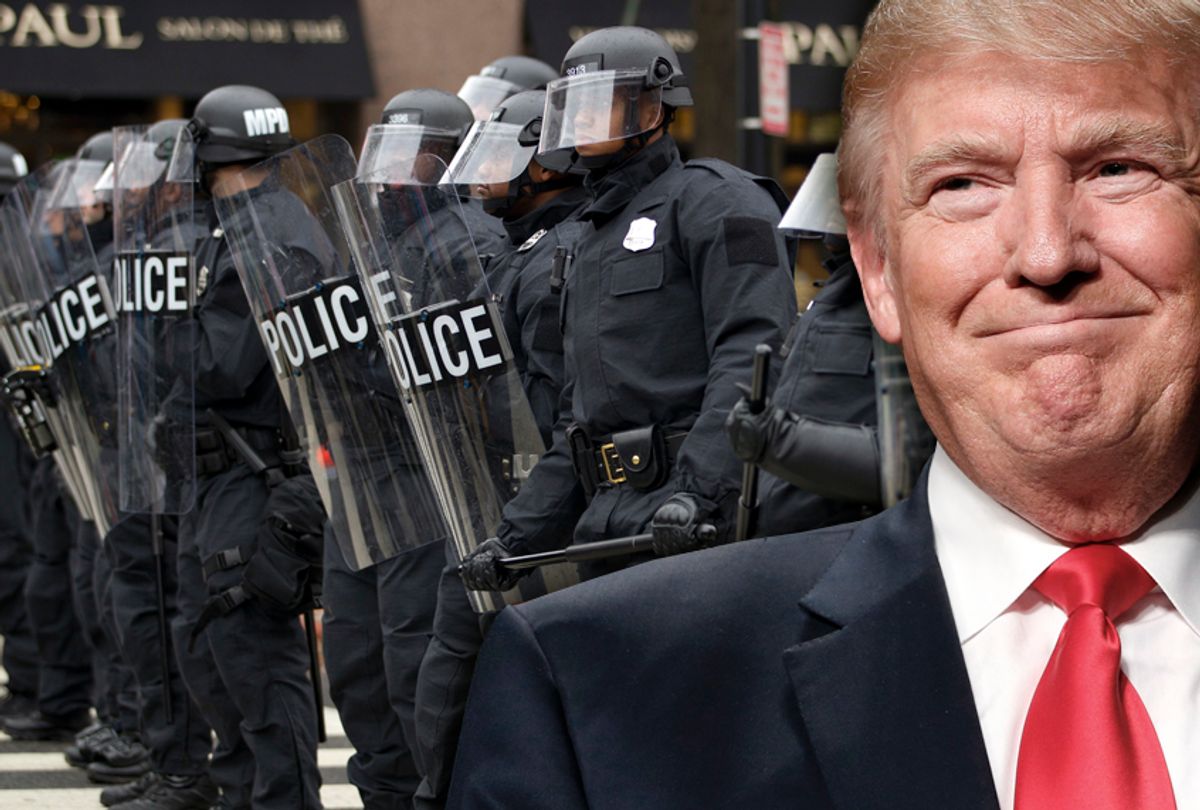 Police officer Stephen Mader was fired in 2016 after he didn't shoot an armed black man, R.J. Williams, who had told the officer to kill him. Mader tried to de-escalate the situation instead. Later, two more officers arrived, and seconds later, one of them shot Williams four times, killing him.

Mader was fired from the Weirton Police Department in West Virginia for "failing to meet probationary standards of an officer," the Washington Post noted, and showed "apparent difficulties in critical incident reasoning." On top of that, Mader was publicly accused of freezing up during the incident. Court documents showed he was called a "coward" by another officer.

"The message the police department sent is tragically clear: Law enforcement in Weirton should err on the side of killing people," the American Civil Liberties Union wrote. The organization filed a lawsuit over Mader's firing, and the city of Weirton settled and will pay him $175,000.

Policing in the United States has long been overdue for widespread reform, and de-escalation tactics should be implemented and upheld on a national level. It's especially necessary as departments have a record of predominantly focusing training hours on shooting firearms, rather than de-escalating potential crisis situations without the need for any deadly force.

But President Donald Trump is in office, and the country is headed in the opposite direction. In both rhetoric and policy, his unconditional support for law enforcement is closely tethered to his hardline, aggressive immigration agenda.

ICE raids have soared under the Trump administration, and arrests of non-criminal undocumented immigrants have rapidly increased. It's important to note that the framework of law enforcement in the U.S. has its own unique failings of which its harshest consequences are often levied upon the nation's poorest, often people of color. This was true even under Obama, and certainly so long before him.

In 2009, 61 percent of immigrants arrested by ICE were listed as having no prior criminal convictions. As the Obama years continued, those numbers dropped quite dramatically and so did the number of arrests, according to Pew Research. Trump has turned back the clock like he has with several items on his political agenda and he's emboldened ICE agents, as arrests of immigrants listed as non-criminal by the agency doubled in 2017.

"When civil rights are violated through Trump's deportation force engaging in racial profiling, warrantless detention, and baseless gang membership allegations, or when a 10-year-old girl is guarded by armed federal agents in her hospital room after surgery, the rule of law is not served but offended," Rickerd explained.

Trump's budget for this year includes measures that bolster law enforcement capabilities and call for hiring increases of ICE and Border Patrol agents.

U.S. Border Patrol agents, who also have a history of abuse, have been increasingly aggressive as well. Recently Border Patrol agents hopped on a bus traveling from Orlando to Miami, and asked passengers to provide proof of citizenship. The reach of Trump's law enforcement state is expanding as incidents have also occurred in proximity to Canada, which shows the willingness of agents to test the boundaries on limitations of their powers.

In one recent incident, a train in Syracuse, New York — 95 miles away from the Canadian border — was inspected by Border Patrol agents who demanded passengers provide documentation of their citizenship. Surprisingly enough, it's not an issue that's only relevant for those traveling somewhat near the borders to the north or south, because the coasts also apply.

"Roughly two-thirds of the United States' population, about 200 million people, lives within the 100-mile zone that an outdated federal regulation defines as the border zone — that is, within 100 miles of a U.S. land or coastal border," the ACLU noted.

Trump has already fed the nation's prison industrial complex and private prison wardens and executives have wined and dined at Trump properties, forging a deeply disturbing and unprecedented alliance between the White House and the industry profiteering off the mass imprisonment of poor people, typically people of color. The Justice Department has all but waged war against so-called sanctuary cities. The police have killed at least 1,000 people for three consecutive years, another American manufactured problem that — you guessed it — disproportionately affects black men, but the president directly told officers not to be "too nice" to suspects in custody. Trump has made police out to be the victims at a time when violence against law enforcement officers has continued to fall.

If that wasn't enough, he's increased the transfer of military weapons and equipment to local police departments — tools for war, not for protection.

The agenda is crystal clear, and a brief glance at history proves both its ineffectiveness and how it's rotten to the core with bad faith and space to be filled by corruption and abuse.