Trump is already feeling the effects of the Oprah charm offensive

Oprah continues her media circuit to say she is not running for president, but we're not ready to give up just yet 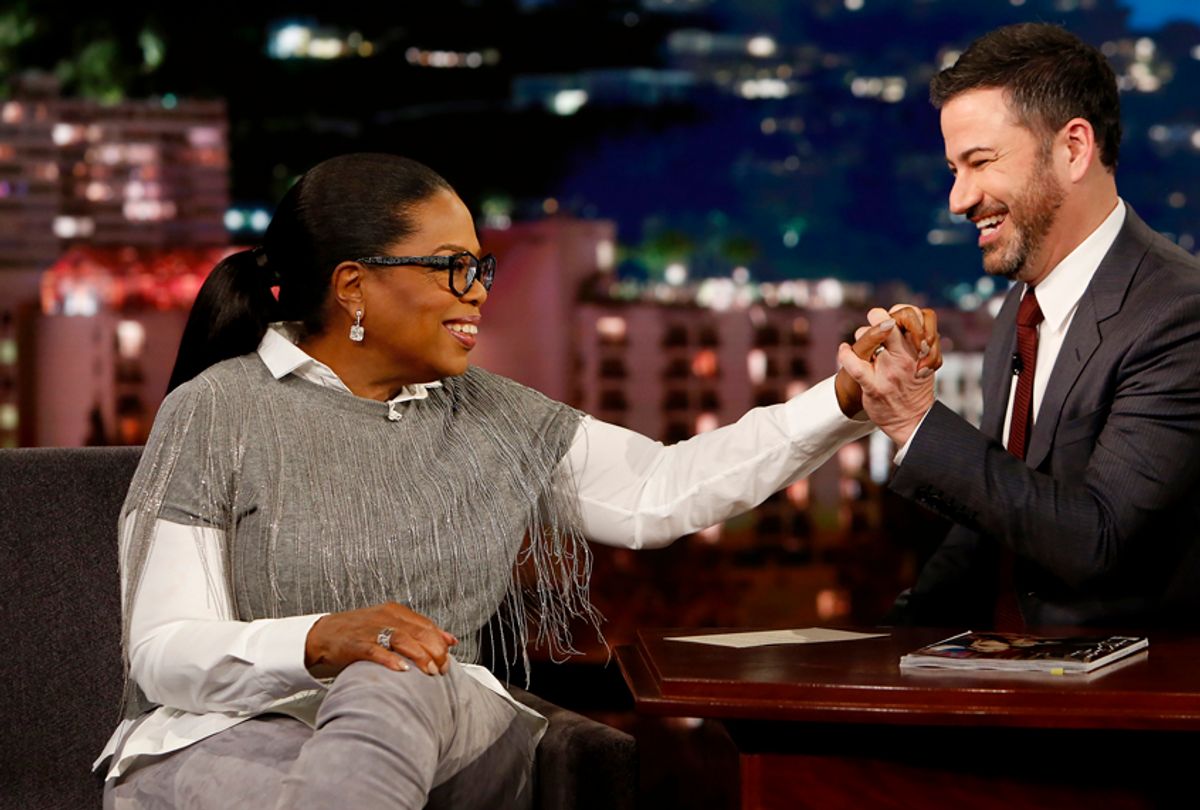 After roaring audience applause upon her introduction on "Jimmy Kimmel Live," the late night host cut through the commotion and got right to the point: "So you're definitely not running for president, that's out?" Kimmel asked.

"Where do I look into the camera?" Winfrey replied. "I am definitely not running for president," she repeated, slowly, clearly and to passionate booing and dissent from the crowd. This late night appearance followed her visit to "The Ellen DeGeneres Show," which also aired Thursday.

"You know, you give a speech and then you sit down, and you have, surprisingly, started to run for president," Winfrey told Kimmel. She gave a rousing and empowering speech at the Golden Globes in January and since then, fans and supporters have unrelentingly pined for Winfrey 2020.

Winfrey revealed that the presidential fantasies for her began immediately, and not just on social media, but backstage at the award show, too. "So, that was a surprise and I was at first thrown by it. It's a humbling thing to have people think that you can run the country, it's a humbling thing," she added. "And so, I'm the kind of person who tries to listen to signs. I think: 'well, am I supposed to run the country? I don't think so.'"

"I feel like you already ran the country for about 15 years," Kimmel retorted. It is certainly a fair assertion to make.

Whether Winfrey's media appearances — even if they consist of telling viewers that emphatically no, she is not running for president — can be seen as a testing of the waters is still up for debate. The resounding applause on talk shows, supportive social media hashtags and think pieces all verify that if it is, indeed, a test; the test is working. And with all the enthusiasm despite her words, it could be a seamless transition to pivot into a campaign a year from now, with the explanation that this is clearly what the people want, or in Oprah lingo: the signs are abundantly clear.

Why else is she making the popular media rounds, from Ellen to Kimmel? It is hard to believe a petty tweet from President Donald Trump really got under Winfrey's skin that much. I mean, c'mon, literally no one believes she is insecure. If anything, the media appearances come off as classy trolling on Winfrey's part, not so subtlety declaring: I'm better at this popularity and ratings thing than you, something that undoubtedly agitates Trump more than any "60 Minutes" segment. Not to mention that poll that says Oprah beats Trump for president in 2020. Can't you just picture his tiny fingers firing away on Twitter, with egregious grammar errors, should such a reality ever materialize?

But the undercurrent here is, Winfrey does not need to run for president. Her impact and influence, politically and culturally, has been demonstrated for decades. Plus we have first hand information about how Republicans treat and isolate a black person occupying the Oval Office.

Still, the appeal is there. She has the brand to rival Trump, and the popularity to topple him — a facet seemingly needed in politics today that feels as critical as it is bizarre. She is a woman, far more beloved and trusted than Hillary Clinton. And her decades in media, talking and listening to people from all walks of life, and recent endeavor into journalism of sorts, points to Winfrey's ability to be in touch with the pulse of the people regardless of her tax bracket.

What is clear is that we won't be getting answers anytime soon. Winfrey will likely continue to circulate the media programs as "A Wrinkle in Time" opens in theaters, fending off campaign questions in her same articulate, ambiguous nature. At the end of the day, maybe Winfrey's appearances, with her affirming and comforting way, serves as a reminder that we are not totally doomed, least not as long as she has the mic.