Nancy Pelosi is widely disliked, as rookie candidate Conor Lamb figured out. But Paul Ryan is even more unpopular. 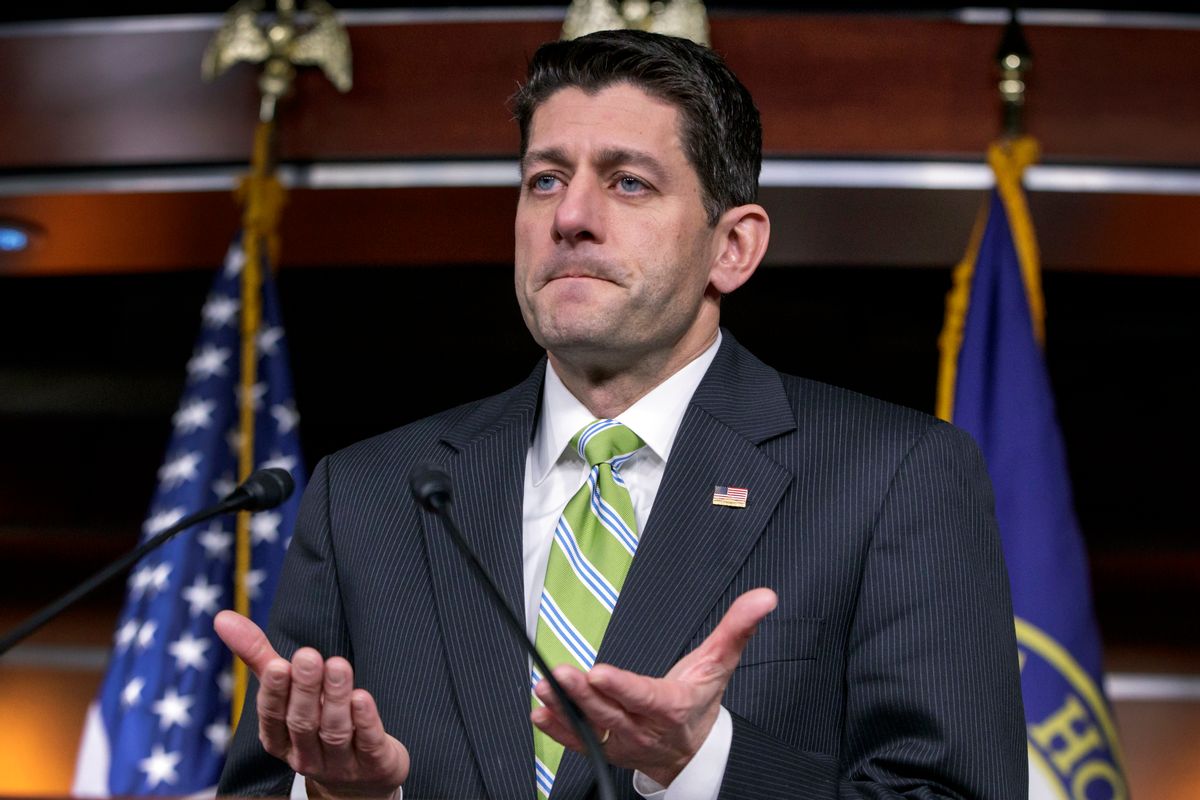 From the very beginning of the race, national Republicans worked hard to push the message that the rookie Democrat was nothing more than a stooge of Pelosi and other "liberal elites." They pushed the idea early and often, particularly after the House minority leader repeatedly dismissed the comparatively small amounts of money that middle-income taxpayers received from the recently-passed GOP tax cut as "crumbs." (After resisting intra-party calls to apologize for her accurate but indecorous phrasing, she eventually recanted.)

Democrats who hear such messaging invariably roll their eyes without realizing that they are not its intended audience. Republicans made the same mistake in 2012 when Democrats seized on covertly recorded remarks from GOP presidential nominee Mitt Romney which derided "47 percent" of Americans for supposedly being useless wards of the federal government.

While the message is one the GOP has used since 2010, it's effective. Pelosi elicits strongly negative views from Republicans and lukewarm support from Democrats, giving her a less than 29 percent approval rating and 50 percent unfavorable rating as of last September. Attacking her was likely the key to GOP victory last year in Georgia, where insurgent candidate Jon Ossoff failed in his special election bid for the state's 6th congressional district.

“Every morning I wake up and I take a moment to be thankful that the Republican Party still has Nancy Pelosi because Nancy Pelosi is absolutely toxic,” Corry Bliss, executive director of a PAC controlled by Ryan, told The Washington Times in reference to the Georgia race.

Instead of allowing the GOP to tie him to Pelosi, however, Lamb repeatedly declared that he did not support Pelosi and would not vote for her as the Democrats' House leader. He took the rhetoric an important step further, not just disowning a link to Pelosi but turning the question around to Paul Ryan. Repeatedly.

“The real issue here is not Nancy Pelosi: It’s Paul Ryan," Lamb said in a January interview with the Pittsburgh Post-Gazette. "He’s the one who has declared that he’s coming after Medicaid and Social Security.”

In a February debate, Lamb gave a much more adept response to the GOP tax cut than Pelosi, the legislative veteran, could come up with.

“I’ve always been for middle class tax cuts. What I’m not happy about is that I think people’s health insurance premiums are now going to go up and we’ve added $1.5 trillion to the national debt," Lamb said when asked what he thought of the new tax law. "We didn’t need to add a penny to our debt to have the tax cut for our working and middle class people. We now know that 85-90 percent of that $1.5 trillion went to the one percent, people who earn $700,000-$800,000 a year and to our largest corporations. I don’t think that was right,” Lamb said.

During the debate, he also managed to turn Saccone's religiosity against him by pointing out how the Republican's claims to be caring for the "helpless" by opposing abortion sound insincere when coupled with his desire to cut federal spending.

The second reason Lamb's attacks on Ryan were smart is that they enabled him to carry out a divide-and-conquer strategy on Pennsylvanians who had voted for Trump. As research has repeatedly shown, about 10 percent of Trump's voters nationally (and even more in Midwestern states) are not committed conservative voters. Instead, they're disaffected Democrats who feel abandoned by a party that under former President Barack Obama began referring to a new "coalition of the ascendant" based on educated whites and racial minorities.

Hillary Clinton carried the idea even further in 2016 by actively refusing to campaign in states like Pennsylvania and Wisconsin, while openly denigrating half of Trump's supporters as "a basket of deplorables."

Although she eventually apologized for the phrasing, Clinton made clear last weekend that she not only holds many of her fellow Americans in contempt, but blames them for their own economic difficulties.

There is some truth to that analysis, but it's not the sort of thing that a savvy politician -- such as Clinton's husband, for instance -- would ever say. Not only because it's patronizing but also because it is morally no better than the type of "maker and taker" rhetoric that Republicans use to justify cuts to anti-poverty programs. Clinton's insult was eerily similar to conservative rhetoric about black Americans supposedly being kept on "plantations" because they generally don't vote Republican.

Michael Moore was correct in proclaiming proclaimed before the 2016 election that Trump would win because he spoke to a population of voters who felt shut out by both parties.

“Trump’s election is going to be the biggest ‘f**k you’ ever recorded in human history — and it will feel good,” Moore argued at an event promoting his film "Michael Moore in TrumpLand."

“Whether Trump means it or not is kind of irrelevant because he's saying the things to people who are hurting, and that's why every beaten-down, nameless, forgotten working stiff who used to be part of what was called the middle class loves Trump," Moore continued.

Instead of repeating Hillary Clinton's error, Lamb's focus on Ryan enabled him to peel off enough voters in a district Trump won by 20 percent by reminding them who really calls the policy shots in the GOP. For all the attention Trump's erratic behavior and controversial statements provoke, he is primarily just an old man who likes yelling at the TV. In-between  shows, he wants to sign bills and be flattered. Since the GOP controls Congress, Trump is more than happy to do whatever Ryan, a true conservative believer, wants him to.

There's no doubt that some Trump voters were motivated by racism or sexism, but plenty of them were people who got tricked. In a post-election survey by the Washington Post, a full 20 percent of people who voted for Trump also said they approved of Obama's job performance. In another survey commissioned by Priorities USA, 30 percent of Obama-to-Trump voters said that they were primarily voting against Clinton. Just 21 percent of them said they expected Trump to create economic policies that would favor the wealthy.

Conor Lamb reminded those voters that they had been sold a bill of goods in a way that did not insult them.

The third reason why Lamb's attacks on Ryan were smart is that they highlighted the huge division on the role of government between between Republican voters and the conservative elites who rule the party.

Most Republican voters want stricter gun laws. They want a higher federal minimum wage. They want more spending on healthcare. The GOP base even wants to raise taxes on rich people.

Needless to say, these subjects are not ones that Republican politicians want to discuss much. Instead, they'd rather deliver cultural populist appeals to grassroots Republicans about how Democrats are motivated by "hatred" for Trump, America, and even God, as Saccone said at a Monday campaign rally.

Unlike Lamb, Saccone couldn't brush off attacks on his party leader. Not only because Republicans are much less tolerant of intra-party ideological dissent but also because Saccone's campaign was being kept afloat by huge sums of out-of-state money from anti-government Republican fat cats. To disavow Ryan, their golden boy, would have meant cutting himself off financially.

During the candidates' February debate, Saccone refused to name any policies where he would differ with Ryan. In his closing statement, Lamb made the connection between Saccone's sycophancy before the conservative donor class and the over $10 million they spent on his behalf.

"They don't tell the truth in their advertising. They want to buy this election that way. And they try to get legislation that they can buy, like the new budget that's coming out which makes cuts to programs that people rely on," he said.

Democrats looking for a lesson coming out of Pennsylvania now have one: To win, make the election about Paul Ryan, not Donald Trump. And get rid of Nancy Pelosi's limousine liberalism in favor of economic policies advocated by Democrats like Sen. Elizabeth Warren, D-Mass., or Rep. Keith Ellison, D-Minn. The best way to beat fake populism is with real populism.