Art of the no-deal: Is Trump a "transactional" president or a Hitler wannabe? Maybe it's both

Is Trump just an ego-driven salesman, or a discount-store dictator trolling democracy into its grave? Yes 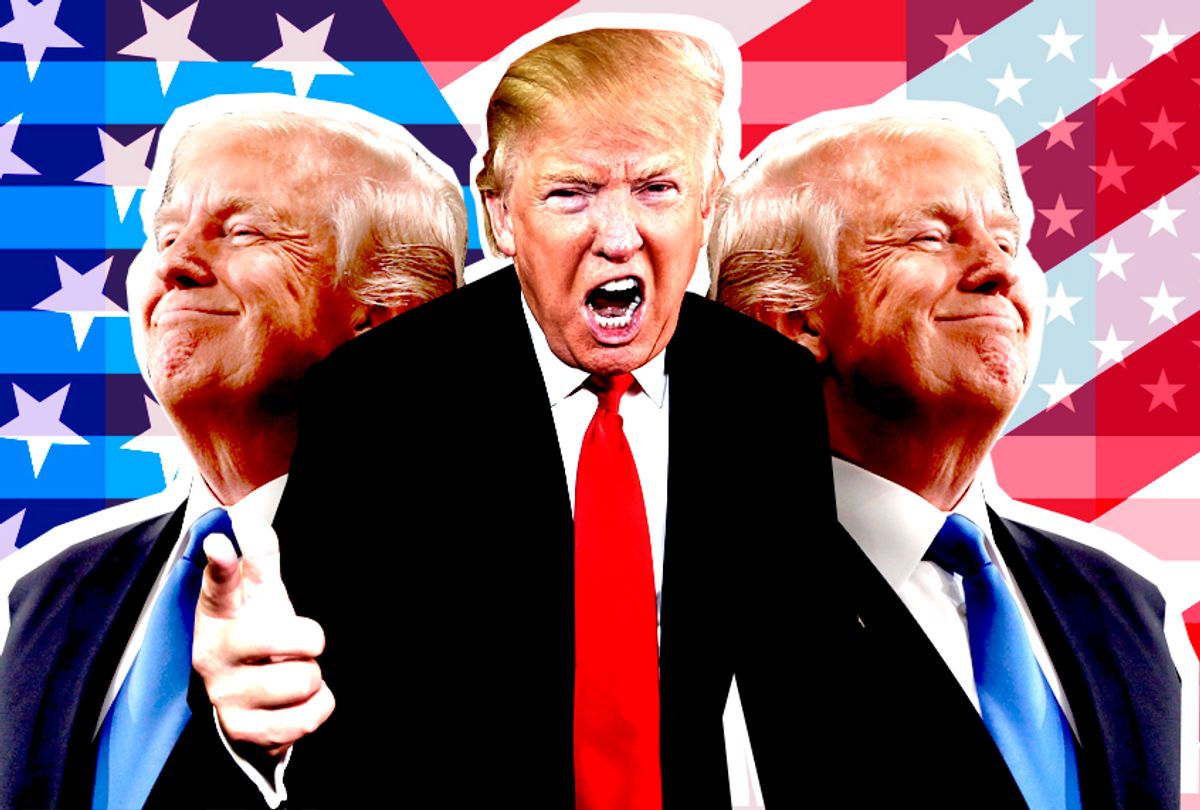 There’s a recurring and perhaps unresolvable debate about the nature of the Trump presidency that came into sharp focus after another week of apparent White House chaos. Is Donald Trump a “transactional” president shaped by the business world, as many of his defenders and normalizers argue, a non-ideological or anti-ideological CEO concerned only with wins and losses and the proverbial “art of the deal”? Or is he an aspiring fascist dictator, a discount-store Hitler scheming to subvert the Constitution, overthrow democracy and impose his will on a nation that largely despises him?

Those propositions sound as if they directly contradict each other, and are generally meant that way. One version generally supports the thesis that Trump might not be any big deal, in historical terms: He is a puzzling accident or one-off anomaly, a hurricane whose landfall could not have been predicted. Once we clean up the damage (which is admittedly extensive), our democracy will more or less return to the way it “functioned” before 2016. The second version presents Trump in stark apocalyptic terms, as an existential threat to democracy in his own right and a vivid symbol of a political, moral and cultural crisis that has been a long time coming.

I don’t think we can say that one of those Trumps is true and the other is false. If we carefully consider Trump’s words and deeds, and his apparent relationship to history, they start to look like two sides of the same coin. Trump is both a crafty, small-minded salesman and a vainglorious dreamer with a limitless ego. The strange tension between those things is a major source of his power. He is not driven by any recognizable ideology beyond a belief in his own greatness — but that belief is infused with the bigotry, misogyny and crude nationalism of a small-minded salesman from Queens.

In the past week we have seen Trump stage a remarkable consolidation of power, firing his secretary of state, his national security adviser and his personal lawyer — all of them members of the despised “establishment” — and surrounding himself with a core of right-wing zealots. Many observers, including Salon’s Heather Digby Parton, expect him to fire Attorney General Jeff Sessions or Deputy Attorney General Rod Rosenstein next (if not both), leading to the direct or indirect shutdown of special counsel Robert Mueller’s investigation — and calling the bluff of the Republican leadership in Congress, which will of course capitulate.

That is the pre-fascist or proto-fascist Trump, surely, the Trump of the not-so-veiled threats of police-state violence, strongman rule or nuclear war. This is the Trump who constantly dares the media and political class to take his hateful insults seriously or to back away from them once again, ceding him another few inches of collective meaning and power. On the rare occasions when Trump himself is forced to retreat, he muddies the water by pretending he never said the offensive thing, or didn’t mean it. Did he say Mexico would pay for his nonexistent wall? Did he say some Nazis were fine people? Did he suggest that Hillary Clinton should be sent to prison? OK, he definitely said those things. But wasn’t it all in fun?

But we also saw the “transactional” Trump this week, who behaves in exactly the same gaslight-scented fashion. He imposed stringent-sounding tariffs on imported steel and aluminum, suggesting a return to the “economic nationalism” of Steve Bannon — but exempted most of the countries from which we actually import steel and aluminum. In a seemingly pointless piece of theater, the president briefly pretended on Friday that he might veto the “omnibus” spending bill that had just passed Congress by a large bipartisan majority. Ultimately someone convinced Trump (or he understood from the beginning) that even he could not get away with single-handedly provoking a government shutdown while blaming others for it.

I would argue that the transactional Trump and the fascist Trump are so closely integrated as to be one and the same. They are in tension but not in contradiction. His veto threat on Friday was both things at once, and not half as incoherent as it may have appeared. As so often happens, Trump apparently took his cues from coverage on Fox News, where commentators complained that the omnibus bill failed to fund the president’s border wall and, secondarily, failed to resolve the situation of the undocumented immigrants covered by DACA.

But to depict Trump as a reactive moron, simply parroting the talking points of “Fox & Friends,” misses the point. Rather, he seized on an opportunity to galvanize his core supporters and bind them to him, and a chance to appear mighty, magnanimous yet persecuted, all at the same time. If he had real power and wasn’t burdened by the sclerotic demands of the legislative process, then the dreamers would be showered with love, the big, beautiful wall would be erected tomorrow and America’s greatness would be restored. Instead, our leader’s feet remain mired in the swamp of “politics,” a word Trump frequently deploys as an insult, meaning “that which does not bend to my will.”

Effectively, Trump’s wannabe-dictator mode and his shifty-negotiator mode are different strategic approaches to the same problem: How to maximize his power and control political discourse without commanding anything close to majority support. This is a new problem in terms of American presidential politics, which have generally been based on the idea of patching together a majority coalition out of disparate demographic slices. Trump hardly even bothers to pretend to speak for the whole country, and when he talks about “Americans,” we all have a pretty good idea who is included and who isn’t.

There is a clear historical precedent for this, and yes, I mean what you think I mean.

Comparing Trump and the semi-reconstructed Republican Party to Adolf Hitler and the Nazi Party is inexact in many ways. As Thomas Childers’ new one-volume history “The Third Reich” makes clear, the social and economic conditions are very different, and there is no reason to believe the outcome will be nearly as catastrophic. But one cannot read Childers’ book without concluding that as a cultural and political phenomenon, the rise of Trumpism echoes the rise of Nazism with an eerie resonance. (In case you’re not getting the point, Childers’ chapter on the decisive German elections of 1932 is titled “Making Germany Great Again.”)

It’s positively chilling to read Childers’ account of the extraordinary media blitz deployed by the Nazis in their 1932 election campaign, which was unlike anything ever seen in European politics. One could reasonably call it “social media,” as permitted by the technology of the time. The party produced 50,000 phonograph records of Hitler’s speeches, small enough to be mailed to voters’ homes. Short films — the campaign ads of the day — were brought from town to town and projected against outdoor walls at night. Special leaflets designed by the party’s “market research” division “were addressed to every conceivable social and demographic group — shopkeepers, civil servants, farmers, workers, Catholics, Protestants, the old, the young, women.”

We now think of the Nazis as the party of virulent anti-Semitism and attempted global conquest, understandably enough. But Childers explains that during the party’s electoral campaigns it emphasized spectacle and confrontation over ideology, and its positions were often incoherent or contradictory: They promised higher prices to farmers and lower prices to city dwellers. “Hitler and Goebbels understood that to an electorate grown cynical and angry, the facts didn’t matter,” Childers writes; no one wanted “a nuanced discussion of the issues.”

Hitler successfully mobilized a mass constituency of middle-class and working-class Germans from across the political spectrum, fueled by “deep-seated anger and anxiety” and drawn to his themes of overt nationalism and “vague, often contradictory promises of dramatic ‘change.’” But the Nazis never attracted even 40 percent of the vote in any remotely fair election; their theory, which proved to be correct, was that a fanatical and devoted cult following, even if a minority, could overwhelm a divided and confused democratic opposition. I don't think I need to ask whether any of that sounds familiar.

Whether or not there is any degree of intentionality in Trump’s echo of Nazi politics, that’s the right context for understanding his seemingly incompatible modes. His presidency is always intended to confuse his foes and invigorate his followers, and to enrage both audiences (albeit in different ways). By commanding the stage that way, Trump believes, he can both survive politically and expand his personal power and his greatness. He has yet to be proven wrong. Unlike Hitler, mercifully, Trump  has no organized party apparatus to speak of and no grand vision of a thousand-year American Reich (or anything else) after his own departure from the scene.

It has often been suggested that Trump is primarily a showman, a performer who has cast himself in the role of the “wrestling heel,” to borrow the analogy of my colleague Chauncey DeVega. That’s an important aspect of the Trump phenomenon, but it does not explain the whole thing. Like any great performer, Trump believes in the role he’s playing, until he moves on to another one. Like any great salesman, he believes the lies that come out of his mouth while he utters them — and is fully prepared, hours or days later, to deny he ever said them at all.

I’m not much interested in Donald Trump’s psychology or “inner life,” which is a field of pulverized bones if ever there was one. But the real problem in America is not him but us: We don’t know how to make sense of Trump, in the present tense, and we can’t tell what role he is likely to play in history. Is he an aberration, an interruption in the regularly scheduled program of democracy, soon to be corrected by Robert Mueller or impeachment or the 2020 election? Or is he the living embodiment of a long process of decay, a death’s-head jester jubilantly tweeting out the end of the American experiment? I’m pretty sure the answer lies somewhere in between — but more to the point, it's an answer we have yet to write.