Ben Carson offers a Biblical explanation for his $31,000 dining set

Carson testified that he believed Jesus would have approved of his response, citing the Sermon on the Mount 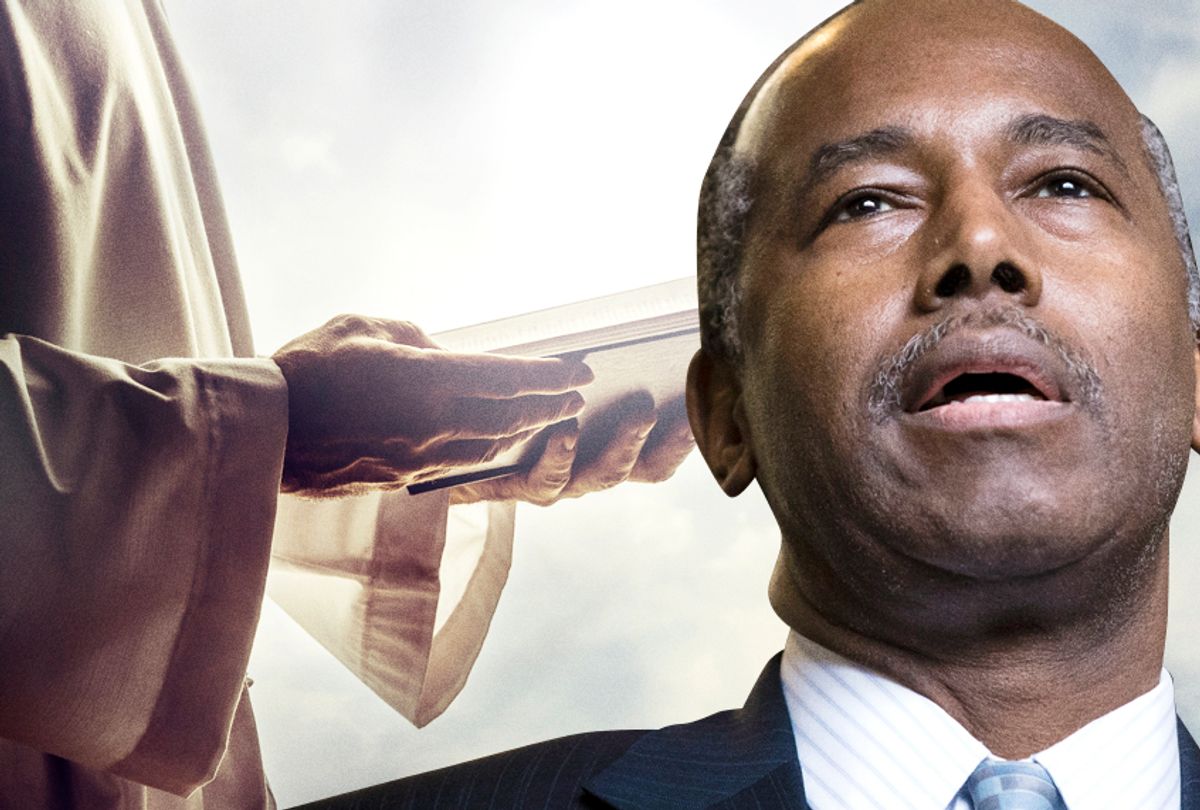 After placing blame on his wife for spending $31,000 on a dining set for his new office, Ben Carson, the secretary of Housing and Urban Development, finally took some responsibility — sort of.

Carson was berated by Democrats on the Senate Banking Committee, specifically Sen. Elizabeth Warren, D-Mass., last week for his egregious overspending at taxpayers' expense. During Carson's hearing on Thursday, Democrats who voted to confirm him seemed to come to regret their decision. He even recently received pressure from his own aides, who according to The New York Times, repeatedly urged the Cabinet secretary to own up to the blatant abuse of funds in order to move away from scrutiny.

But, as reported by the Times, Carson "has privately fumed about what he regards as the unfairness of being singled out for criticism," and "resisted [taking ownership] until Thursday’s hearing, when one of the panel’s Republicans, Senator Tim Scott of South Carolina, gently prodded him to be more contrite."

The failed presidential candidate and former neurosurgeon then went on to make himself out to be a victim:

Later, he [Carson] suggested the episode had been a personal ordeal, saying that he modeled his reaction to the criticism on advice that Jesus gave in the Sermon on the Mount, which he summarized as “don’t worry about what people are saying about you, and do the right thing.”

In sum, it appears as if Carson initially refused to take responsibility for what happened because advice from Jesus told him not to be concerned about what others had criticized him for, so long as he kept doing the right thing.

President Donald Trump's administration has been deeply entangled in a myriad of taxpayer scandals since he moved into the White House, despite his campaign pledge to "drain the swamp" of Washington's elitist corruption.

Further, the White House has been reported to be in a state of chaos and confusion amid major staff shake-ups. On Sunday, a close Trump ally and chief executive of Newsmax, Christopher Ruddy, said the president had told him there would likely be "one or two major changes" to his administration coming soon.

Little is still known about those changes, but Carson's job was said to still be safe, which is troubling in several ways.

Carson and the president still appear to be on the same page, and the HUD secretary — who had no prior experience in government — expressed support for Trump's budget request for 2019, which cut $6 billion from the department. Fortunately, Congress rejected that proposal in the $1.3 trillion omnibus bill and increased funding, which the president signed begrudgingly on Friday to keep the government running.

Of course, it all comes at a time when the nation needs HUD, as the gap in homeownership between black and white Americans is wider than it was during the Jim Crow era.