The New York Times tried to broaden its range of opinions: A good idea, thoroughly botched

Editors at the Gray Lady had good intentions in hiring new columnists. But the results have been a total mess 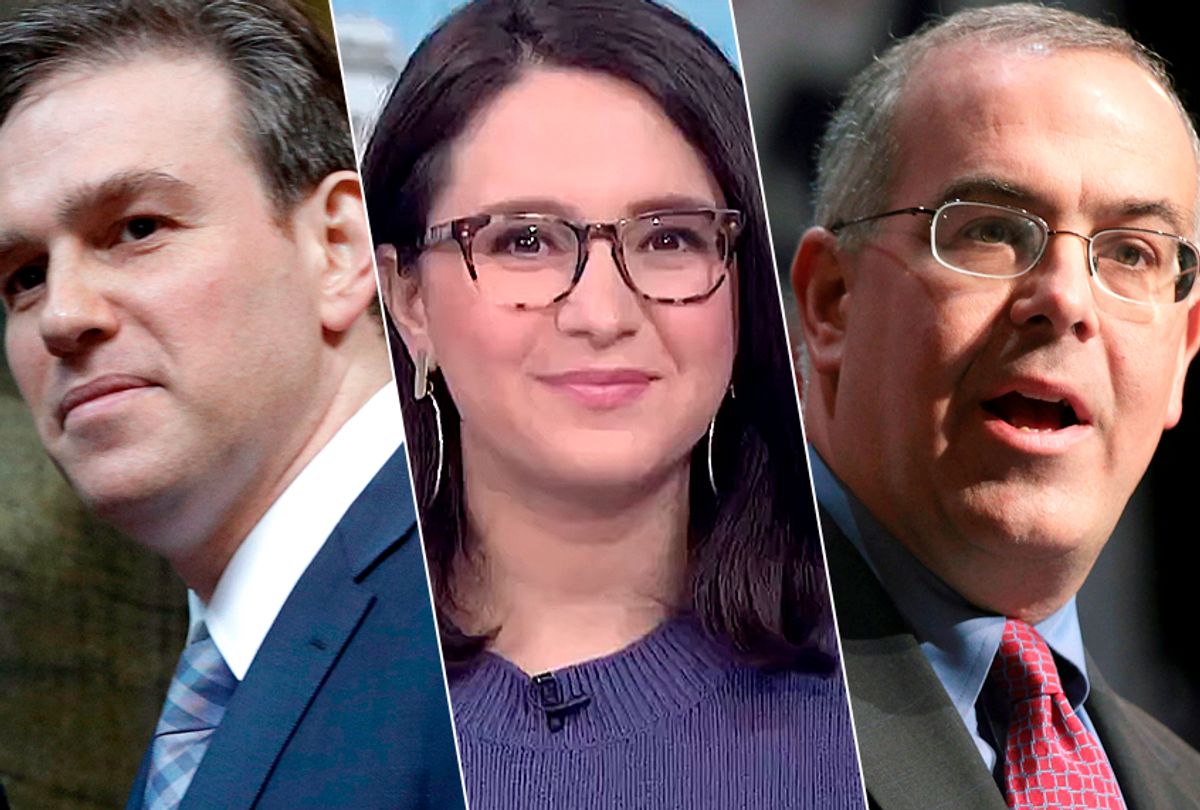 NEW YORK, NY - DECEMBER 13: Journalist David Brooks speaks at the launch of the unaffiliated political organization known as No Labels December 13, 2010 at Columbia University in New York City. The event features numerous politicians, journalists and citizens in a series of panels which address some of the most intractable political issues in America. Led by Republican political consultant Mark McKinnon, Democratic consultant Kiki McLean, political advisor Nancy Jacobson and CNN contributor John Avlon, the group looks to find solutions to problems partly by getting politicians to put aside their partisan behavior in order to find common ground. (Photo by Spencer Platt/Getty Images) (AP/Getty/YouTube)
--

After the 2016 presidential election caught his publication by surprise, the New York Times’ Executive Editor Dean Baquet announced that he and his colleagues would try to avoid such mistakes by working to expand their journalistic horizons.

“If I have a mea culpa for journalists and journalism, it’s that we’ve got to do a much better job of being on the road, out in the country, talking to different kinds of people than the people we talk to — especially if you happen to be a New York-based news organization — and remind ourselves that New York is not the real world,” he told Times Media Columnist Jim Rutenberg the day after Donald Trump shocked everyone, including himself, by winning the presidency.

Baquet has lived up to his goal, expanding the Times’ coverage of politics outside the Eastern seaboard, often with great success. Of course there have also been some noteworthy flubs, like the 2,000-word report published in November that appeared to portray an Ohio white nationalist as a normal and perhaps sympathetic figure.

The Times’ opinion columns have proved much more controversial, however. Readers, internal critics and outside observers have trained numerous fusillades on the various columnists and occasional contributors brought in by Editorial Page Editor James Bennet in his own effort to follow Baquet’s directive, along with former Times publisher Adolph Ochs’ dictum to “invite intelligent discussion from all shades of opinion.”

“It’s a commonplace borne out by social science that Americans are sorting themselves by party or convictions and losing the ability to engage respectfully — even if only to disagree — across those tribal lines,” Bennet wrote in a lengthy February memo to colleagues. “Most people seem to think this is a bad thing, but very few institutions are trying seriously to do anything about it. We are trying. It’s what The Times is supposed to do, and it’s what democracy needs.”

Even before Bennet’s changes, the Times opinion section had long been a source of consternation to the paper’s liberal-leaning readership. In terms of intellectual diversity, the op-ed page does not regularly feature any contributors who could be considered leftists (as opposed to liberals), nor any prominent anti-war voices. Kashana Cauley seems to be the only woman of color who contributes on a regular basis (Roxane Gay has published one column in 2018), and Turkish journalist Mustafa Akyol appears to be the only (infrequent) Muslim contributor.

Certain prominent Times opinion writers seem to have irked readers for many years. Columnist David Brooks, formerly an editor at the conservative Weekly Standard, has been a particular favorite of the paper’s outside critics, including at Salon. Many have also targeted Thomas Friedman for his Iraq war boosterism and propensity to contradict himself. Still others have accused Maureen Dowd of a longstanding animus against Hillary Clinton.

More recent hires have not necessarily fared better. Newly minted technology columnist Quinn Norton was apparently poorly vetted by Times editors and was fired in February after less than a day on the job. That came after readers unearthed her social media profile, which made clear that she had repeatedly used anti-gay slurs online and was friends with a prominent neo-Nazi who has advocated murdering Jewish children.

“Some people on the left can be snide, reductive, and needlessly aggressive in dismissing others’ viewpoints,” Slate blogger Ben Mathis-Lilley wrote while documenting an extensive catalog of columns from Stephens, Brooks and Weiss on the subject. “I genuinely don’t think it’s helping anyone, though, to hear this point made endlessly and as if it is the most important, high-stakes subject in the entire world.”

One person who seems to disagree with the idea that college leftists are shutting down conservatives is Trump himself.

During an interview last Thursday, the president stated that he did not believe censorship of conservatives was a big problem. “I think the numbers are actually much different than people think,” he said. “I would say we have majority support. I think it’s highly overblown. Highly overblown.”

Weiss’ credibility on censorship issues has also been called into question given her past activism against university professors who have been critical of the Israeli government. She’s also been derided for twice citing a parody Twitter account as proof of left-wing intolerance and for an attempt at humor which falsely implied that U.S. figure skater Mirai Nagasu, a California native, was an immigrant.

While Bennet and his columnists have come under sustained attack from the political left recently, the Times’ conservative writers have, for an even longer period of time, been regarded as insufficiently pure by many commentators on the right. Last October, several conservatives blasted a column by Stephens that called for repealing the Second Amendment to the U.S. Constitution.

Fox News host Sean Hannity denounced the Times columnist as a “so-called conservative” and a “handmaiden” of Democrats. His colleague Brian Flood was even more dismissive.

“Less than six months later, Stephens hardly passes for a conservative in the eyes of right-leaning influencers,” Flood wrote. “Liberal New York Times readers don’t have to appear outraged that The Gray Lady hired a conservative any longer.”

Breitbart News has taken a similarly negative view of David Brooks, often using quotation marks when describing him as a conservative. Last August, the far-right site referred to him as “a cardboard cut-out of an empty suit, who ostensibly represents the views of the opposition, but says nothing that ruffles the feathers of his politically correct overseers.”

In the face of disapproval from both the right and the left, it’s easy to see why Bennet and his colleagues might just try to take it all in stride. “I’ve lost the capacity to gauge the opprobrium — what’s irrational versus what’s a reasonable amount of Internet outrage these days,” Bennet told Vanity Fair last month. “Right now, it’s really hard to separate the signal from the noise.”

Other critics seem to want the Times to just abandon the idea of offering its own mini-version of the public square.

“The opinion section in general is a case study in how essentially liberal institutions are undermined by the tools of their own liberalism,” HuffPost reporter Ashley Feinberg wrote last month. “Illiberalism seeps into the hollows created by seemingly high-minded values about debate and the marketplace of ideas.”

Both of these responses are ill-advised. While the opinion section’s critics may seem to offer contradictory advice, they actually all have a point. Additionally, it makes sense that the publication regarded by itself and others as America’s media outlet of record would try to set an example for spirited but civil dialogue.

Appeasing its left-wing critics is an easy enough task for the Times, or should be. As things stand, the paper’s daily bloggers and columnists are badly out of touch with the burgeoning populist movement that is remaking Democratic politics at the grassroots level. The paper also has not made enough room for columnists who write regularly on issues of concern to Latinos, or for writers who espouse the combination of culturally conservative but economically progressive politics that is common among blue-collar people of all races.

Luckily for the Times, there are a multiplicity of excellent writers out there who could easily slot into the paper's opinion machinery to resolve these deficiencies.

Dealing with the paper’s right-wing critics is a more difficult problem. American conservatism largely collapsed, as an intellectual movement, after the end of the Cold War. That was when the right-wing alternative media system took over the Republican Party after the more policy-centered portions of the conservative movement proved themselves unable to frame any coherent debate around issues like economic policy, women’s rights, government spending or evolutionary theory.

Trumpian conservatives cannot debate those issues either, of course. But they can at least make a lot of noise, as CNN has proven by hiring a series of dense Republican shills who trash the channel whenever they're not on camera. While such verbal filibustering is, unfortunately, permissible on cable news, it does not work in print: “Owning the libs” and behaving like a jerk still do not count as arguments.

Times columnists, whatever you think of their literary skills, are still required to make arguments and to adhere to basic factual and civility standards. That’s why Trumpian conservatives are in a sense correct to regard the Grey Lady’s conservative columnists as fakes.

Libertarian-inflected conservatism has dominated Republican politics for more than 50 years, but it has actually never had any real constituency. NeverTrump conservatism didn’t work because most GOP voters simply do not care about “limited government.” The cultural populism that Republican politicians have used for generations to cover up their unpopular economic agenda has now become the only thing that many Trumpian Republicans actually want. Pissing off liberals has become not just a means; it is now an end.

It’s not clear how long American conservatism will remain in this ungainly phase. But the Times is not wrong to try and illuminate a better way. For all their faults, Bennet’s conservative writers have shown (to varying degrees) a much greater ability to admit that the anti-government right has collapsed, perhaps irrevocably.

“Those of us who want a better, saner and more decent populism than what Donald Trump is selling need to reckon with the implications of his indubitable appeal,” Ross Douthat wrote in January of 2016. “Maybe — hopefully — there’s a bridge from Trumpism to a more responsible alternative, as there was between Huey Long and F.D.R. or from George Wallace to Richard Nixon.”

If such a bridge can be built, it will require the cooperation of both right and left. Dean Baquet and James Bennet are working on that bridge, however imperfectly.

Conservative media outlets ought to make similar efforts to pop their audiences’ intellectual bubbles as well. That they have thus far been unwilling or unable to do so has no bearing on the importance of what the Times is attempting to do. At the very least, there are many young and educated conservatives whose worldviews are being shaped in this chaotic political moment. If their constant exposure to incoherent Trumpian rabble-rousing can be tempered by reading the Times’ conservatives, this is all to the good.

I speak from experience. After spending 15 years writing and creating conservative publications and waging my own war against “liberal media bias,” I realized that conservative policies come under so much criticism because many are not intellectually rigorous and largely do not work. I have no doubt that there are other people out there who would come to similar conclusions, if given half the chance.