How they made Germany great again: The Nazi social media campaign of 1932

Decades before Facebook, Hitler and Goebbels pioneered the use of Big Data and "social media" to subvert democracy 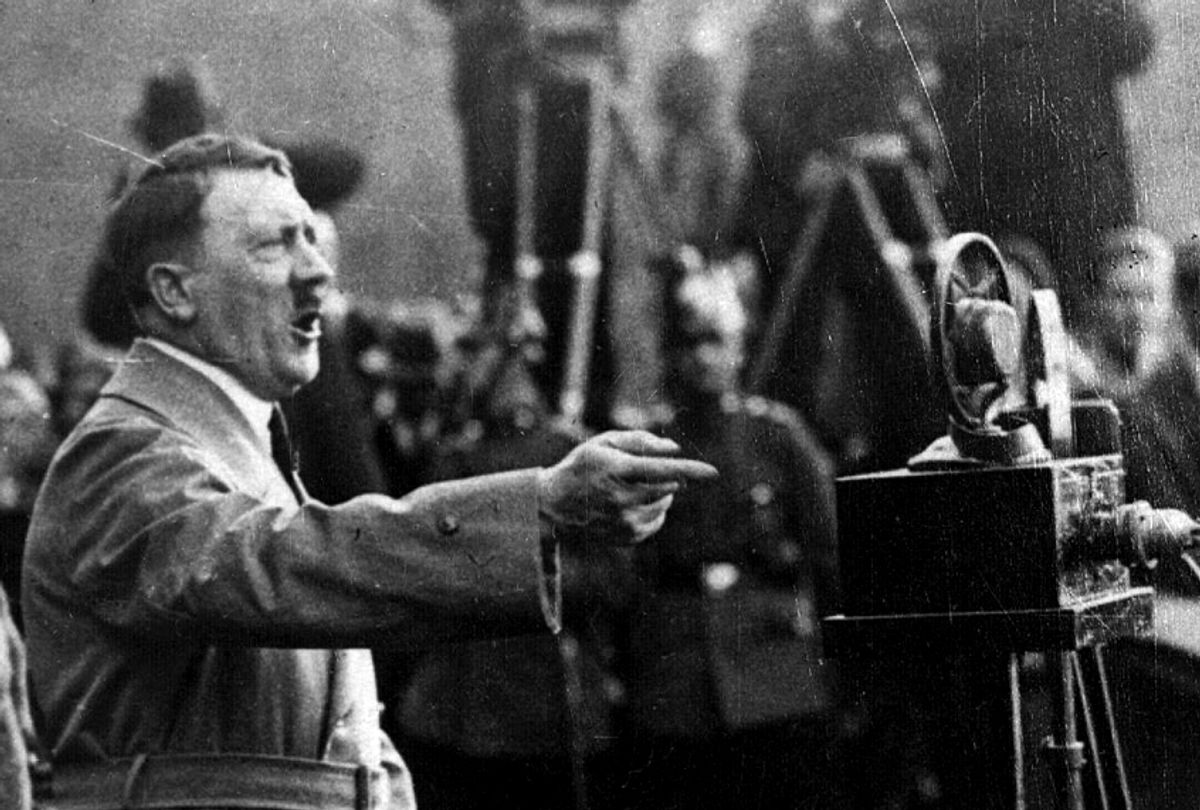 It's a little too easy to draw comparisons between the rise of Adolf Hitler and the Nazis in 1930s Germany and the shocking election of President Donald Trump in 2016. Both events took the political establishment by surprise, and seemed to defy conventional wisdom about the stability of what in Hitler’s time was known as “bourgeois democracy.”

As various commentators (including me) have observed, there are some striking similarities between Trump and Hitler as personalities and political lightning rods, which become especially clear if you read German scholar Joachim Fest’s landmark 1970s biography of Hitler. Hannah Arendt’s famous analysis of the social and psychological climate that makes totalitarianism possible, developed of course in response to the Nazi regime, can sometimes sound as if she were describing the contemporary United States.

But the political and cultural circumstances of 21st-century America and Weimar Germany are more different than they are similar. Hitler and his inner circle spent many years building a fascist political movement from the streets of Munich on up. Donald Trump has no organized movement and to this point has not needed one. He rose to power at the head of a pop-up fascist insurrection, staging a coup inside an existing political party that had become fatally weakened by its cynicism and lack of ideological clarity. Trump might want to abolish the Constitution and appoint himself dictator for life, but fortunately for America and the world he lacks the willpower, the vision, the organizational skill, the popular mandate and any other qualities that might make that possible.

There is one area of strange similarity between the Nazi era and the Trump era, however, that has not been widely explored, and seems almost uncanny at the moment. As longtime University of Pennsylvania scholar Thomas Childers explores in his riveting new one-volume history, “The Third Reich,” the Nazi electoral surge of 1932, which paved the way for Hitler’s seizure of power, was built on what could reasonably be called a social media campaign, decades before that term existed. Certain Nazi innovations of that year, in fact, seem to anticipate or imagine phenomena like the TV ad or the viral YouTube clip that we believe are distinctive to our so-called media democracy.

There are many intriguing and perhaps unanswerable questions about this parallel, in the wake of recent news about how Facebook was exploited by both the Trump campaign and presumed Russian trolls, and claims by Cambridge Analytica executives that their firm’s dark techno-wizardry got Trump elected. Did Steve Bannon, a co-founder of Cambridge Analytica and Trump’s “campaign CEO,” know about the Nazi innovations of 1932 and seek to emulate them using modern technology? Is this historical echo something more than a coincidence or massive cosmic joke? Are those who dislike or distrust democracy especially inclined to find ingenious ways to hack it?

But first let’s look at the extraordinary details of 1932, a decisive year of political crisis in Germany that featured a presidential election in March, regional elections in April and a national parliamentary election in July. Although the Nazis didn’t come close to winning a majority in any of those, they transformed themselves into Germany’s largest single party and paved the way for Hitler’s seizure of power, largely through an extraordinary propaganda assault that drummed the Führer’s image, speeches and catch-phrases into the consciousness of every citizen. It was “a massive media blitz,” Childers writes, “the likes of which had never been seen in German politics.”

He describes the atmosphere at the Berlin offices of the RPL, the party’s propaganda operation under Joseph Goebbels, which in retrospect looks like the first fully modern political campaign:

The clatter of typewriters echoed from every room in the building; telephones jangled without stop. Hourly reports poured in from all over the country. The staff produced fifty thousand phonograph records, small enough to slip into a postal envelope, and several short films for distribution. The films, none longer than fifteen minutes, featured speeches by Hitler, Goebbels, and other Nazi leaders. They would not be shown in theaters but in public plazas in major cities and market towns. … In the torrent of printed matter that rained down on the country, special leaflets were addressed to every conceivable social and demographic group – shopkeepers, civil servants, farmers, workers, Catholics, Protestants, the old, the young, women. The content of these appeals was based on an analysis by the party’s market research. In Department III, on the second floor, a group of young men, most in their twenties and early thirties, analyzed reports submitted from the party’s regional propaganda affiliates. They sifted through them all, preparing summaries for Goebbels, their chief, who would evaluate them.

If you’re wondering whether Childers understands how much this sounds like the micro-targeting and niche marketing that are ubiquitous in contemporary politics, and how much it sounds like the 2016 Trump campaign in particular, the answer is clear. His chapter on 1932 is titled “Making Germany Great Again” — which, to be fair, is a reasonable approximation of Hitler’s core message to a demoralized and divided populace.

Apparently, no one had previously considered the political utility of mining demographic data from the Addressbuch, a precursor to the telephone directory — or a precursor to Facebook, for that matter — that was published in every region of Germany and listed the occupation of every head of household. The Nazis did so to construct their targeted appeals to different kinds of voters, using a message that was invariably “simple, direct, and shorn of any nuance, couched in a few snappy catch-phrases, a handful of images and easily recognized code words.”

By the end of that year the Nazis had staged more than 30,000 campaign events, and Goebbels’ office could offer local organizers detailed instructions and logistical aid in making sure they went well. (The Nazis didn’t just run the first modern political campaign; they were the first campaign consultants.) Increasingly artful posters were plastered on the walls of every German city and town; the one Hitler liked best was just a stark black-and-white image of his face above his surname. Hitler, Childers writes, became not just a political leader but “a national celebrity, easily the most recognizable — and controversial — figure of German political life. Even his enemies — and they were legion — were obsessed with him. His habits, his tastes, his background, his personal life were the topics of endless speculation, gossip, and analysis.”

One can occasionally accuse Childers of troweling it on a bit thick — “Hitler and only Hitler could make Germany great again” — or rather of being coy by drawing obvious references without quite naming them. But it’s not as if he’s making up the evidence when he observes that the successive Nazi campaigns of 1932 were largely about branding, merchandising and showmanship, and hardly at all about policy or ideology. Indeed, while the party’s anti-Semitic attitudes were well known, hostility to Jews did not play a major role in the 1932 campaigns -- arguably a lesser than anti-immigrant or anti-Muslim sentiment played in Trump’s 2016 campaign.

Of course the Nazi propensity for grand spectacle, exemplified in the huge Nuremberg rallies of later years, is well understood. Childers’ book makes clear that this goes back to the party’s beginnings in the beer halls of Munich, and the theory was well developed by ’32. Hitler’s public appearances were built on a “politics of presentation” and a certain amount of semi-scripted drama: The hall hired for the occasion was always too small, so crowds would gather outside to hear the speech on loudspeakers, provoking street brawls with Communists and other left-wing protesters. “The stagecraft, the timing, the theatricality was everything,” Childers writes. “You didn’t want to miss it.”

But the most important discovery underlying the Nazi deployment of spectacle, perhaps — and also underlying the Nazi invention of modern campaign tactics — was that facts did not matter. Hitler and Goebbels shared the view, Childers writes, that “an electorate grown cynical and angry … did not want a nuanced discussion of the issues.” While the Nazis published position papers on every conceivable issue (which were often contradictory or incoherent), party speakers were told to steer away from specifics and stick to the talking points supplied by the propaganda team. Hitler’s speeches featured an unrelenting assault on a failed political system (i.e., democracy) mixed with a vague vision of future greatness.

The existing “system” was a swindle … and the other parties were the puppets of special interests — especially big business and big labor. The mainstream parties … had sold out the farmer, the shopkeeper, and the worker to the corporate giants and corrupt union bosses. What had this democracy delivered, but an unbroken string of economic disasters, social strife, and humiliating international oppression? …

It was a speech that combined lofty calls for national unity and common purpose with a wickedly sarcastic caricature of the current system that invariably drew appreciative applause and knowing laughter from the crowd. One did not need to be a Nazi sympathizer or a committed Nazi to find this critique of Germany’s political plight on target.

No commentary is needed to amplify the point, which goes well beyond the question of whether this eerie historical echo is conscious or deliberate. Childers’ entire history of the Third Reich is an illustration of what can happen when mainstream political leaders fail to address, or even to recognize, a national mood of crisis, and allow the clownish outsider to call them out as hypocrites or stooges. The insight captured above — you didn’t have to like Hitler/Trump to have that moment of, Boy, ha ha, that guy’s got a point! — was crucial in both cases. At least he wasn't one of the idiots who got us into this mess!

If that historical pattern has now repeated itself, and if our political system has now been reminded that "democracy" does not turn on facts or truth or reason, does that mean that Trump is the same as Hitler or that the outcome will be a genocidal police state and world war? Of course not. But at least we can stop pretending that there’s something special about American democracy that renders it immune to such an existential collapse.

As I suggested earlier, many questions emerge from this history that seem to lead us in circles. Did Steve Bannon or someone else in the Trump campaign consciously model its rhetoric, strategy and tactics on the campaign that propelled Hitler to power? Did the so-called geniuses at Cambridge Analytica understand they were using new tools to perfect the data-harvesting and demographic targeting methods pioneered by Joseph Goebbels? That’s certainly conceivable, but it also wasn’t necessary.

Everyone in politics, after all, has tried to find untapped new streams of data and effective new forms of propaganda. In different ways, Barack Obama's 2008 campaign and Bernie Sanders' 2016 campaign were just as innovative as the shadowy cluster of masterminds behind the Trump campaign, if slightly less unscrupulous. All parties in Western electoral democracy, in effect, deploy tactics and methodology first developed by a political party whose primary goal was to destroy Western electoral democracy. It’s like Snow White eating the apple given to her by her wicked stepmother: She knows perfectly well that it’s poisoned, but she can’t help herself.

The Nazis uncovered a great flaw at the heart of democracy: With enough money, malice and ingenuity it could be hacked and subverted, and in that sense it was not really democracy at all. In sanctimoniously rejecting the Nazis' contempt for democracy we have also pretended to forget their discovery about its inner workings, and pretended not to understand its true implications. History is now forcing us to quit pretending.