Why is R. Kelly immune to #MeToo? 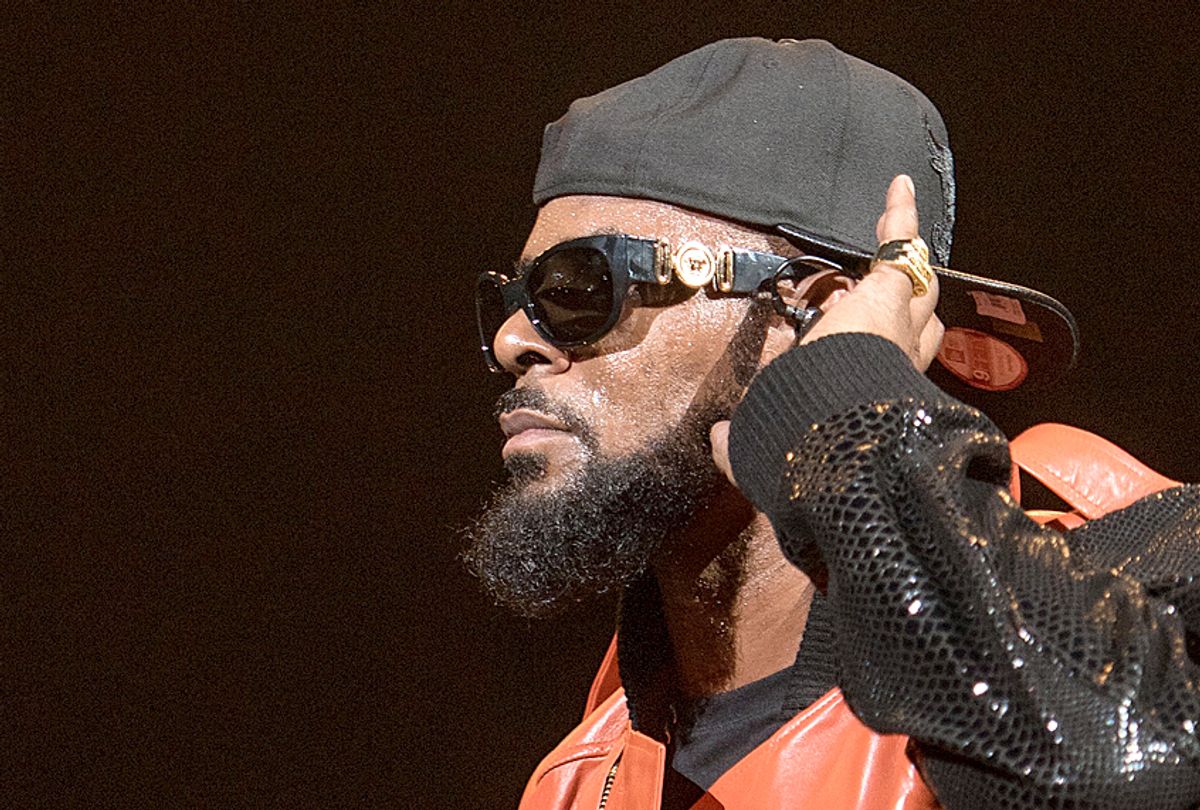 Over just the past six months, the world has changed. The predatory behavior of powerful men — powerful men who often engaged in their abusive tactics for years — has come to light and there have been consequences in their professional and personal lives. Harvey Weinstein, Matt Lauer, Charlie Rose, Russell Simmons, Kevin Spacey and multiple others have felt the repercussions of the behavior they're accused of. Yet R. Kelly  continues to sail along seemingly unscathed. It's been 24 years since the now 51 year-old singer married a 15 year-old Aaliyah. Since then, there have been multiple lawsuits and settlements and accusations of abuse and underage sexual relations. There are, by multiple accounts, women living in his home and being controlled by his alleged “cult” like behavior right now. Kelly, meanwhile, is playing at Chicago's 9,500 capacity UIC Pavillon in May.

No journalist has been more dogged in his pursuit of the truth behind R. Kelly's still wildly successful persona than Jim DeRogatis, the Chicago music writer who's been following the story for nearly two decades.  On the heels of the BBC's recent documentary exploring Kelly's lengthy and alarming history, Salon spoke to DeRogatis about his own relentless investigations, and why the superstar has still managed to dodge the reckoning that's come for so many others.

I don’t understand how this has still been going on. I have a 14-year-old daughter myself, and I have been hearing about this for twenty years.

Forever. Because I’ve been reporting on it since 2000.

Is this because it’s about black girls and people don’t care as much about when black girls are being sexually exploited? Is it because he is so successful?

He is not as successful as Kevin Spacey or Harvey Weinstein or Matt Lauer. I wrote a piece about this for the New Yorker  about why. And yes, I think it’s because these victims are not fabulous, famous white actresses. I think they’re black girls nobody cares about. They’re not even famous black girls. That’s part of it.

But I also think, if you look at the history of music, Jerry Lee Lewis marries Myra Gale. She’s 13. People, in the wake of David Bowie’s death, were pointing out his many affairs with underage groupies. And Jimmy Page and Steven Tyler.

And Don Henley was caught with an underage girl who'd overdosed after a party. That gets scrubbed out of Eagles history. But I think it’s wrong to lump this with groupie culture.

Because what this is, is a predator who has, for three decades, preyed on very vulnerable 14, 15, 16-year old girls. It crystallized for me early in my reporting when someone close to him who was part of the circle for years said that night after night after night there are twenty beautiful, half-naked women backstage in the room.

I think this is the perfect cover. Probably even better than being a Catholic priest. He is preying on the most vulnerable victims imaginable. Somebody nobody cares about, because if you’re a young black woman — even worse than rape culture and women in general — you are not believed. You are a gold-digger, a bitch or a whore. And you know, going after these girls who are seemingly vulnerable, some from broken homes, it can take as little as a pair of sneakers.

The girl on the tape, for which he was tried — it took six years to go to trial — and she never testified. Her mother and father never testified. But there were more than a dozen witnesses: her aunt, her grandmother, her pastor, her basketball coach, her best friend, and her best friend’s parents who did testify that, that was the girl and that was how old she was and that was R. Kelly. The jury believed a hundred percent that it was R. Kelly but, rape culture. They never heard from the victim and so they couldn’t indict. They couldn’t commit.

That’s another thing that I find so, so frustrating in this story. It's unlike even the Larry Nassar case, where the victims are coming forward.

"Cult" is what the parents and Jerhonda and women like Kitti Jones and Asante McGee who were in sexual relationships with him [say].

It’s a consistent portrait the women have painted since 2000. I’m baffled why Live Nation is currently selling tickets to an arena show here by Kelly in May. He’s still touring. He’s doing another show in North Carolina. Live Nation is the biggest corporate global concert promoter in the world. There are people on that board of directors who are significant and powerful people and why they are not holding the corporation responsible?

[Kelly's 2014 tour was called "The Black Panties Tour," a particularly nauseating phrase, considering that goading young women to tell him what color panties they're wearing appears to be a well-worn element of his predation.]

Why is he Teflon? Why?

I think it’s a weird combination of factors. Number one, the victims are people that society doesn't care about, young black girls. Number two, I think, there's something about the music world. This has happened forever; this will happen forever, we don’t care." Number three, we have to remember that aside from “Space Jam” and “I Believe I Can Fly”, Kelly is a uniquely black star. The fan base is not as big as it is for Jay-Z or other black superstars. The white fan base is pretty ignorant of a man who sold 60 million records namely to black fans except — and here is another exceedingly troublesome aspect. In 2013, he headlined the Pitchfork Music Festival. He performed subsequently with Phoenix at Coachella and he performed as the headliner at Bonnaroo. Those are all craft beer drinking, privileged hipster white people, knowing that there’s something in his past. And here in Chicago, Pitchfork especially was inexcusable because they knew. And yet, they booked him anyway. And when he took the stage for 30,000 craft beer drinking bearded hipster graduate students, he was half a mile away from the home of one of those girls who sued him and slit her wrists because of a sexual relationship with him.

You know, we have the black world who grew up with him. Half of the black world despises him and half of the black world is, "My babies were conceived to his music and the man was acquitted and get off his dick." But the white hipster world, I cannot understand or condone. It makes me sick to my stomach that they can listen to "Trapped In the Closet" and "Sex in the Kitchen" and "I'm your sexasaurus" and hear it as hypersexualized schtick. In fact, his entire canon of music is a documentation of his hedonistic desires, which, if you do any sort of examination of the context means, "I’m free to pursue underage black girls as I please because I’m R. Kelly, the Pied Piper of R&B, the sexual super freak." Those are his words. That’s what he calls himself. It’s not like he has been guilty of a lack of truth in advertising.

I can’t get my head around it, that it bubbles up and people talk about it, and yet what in the actual hell will it take to hold this guy accountable for anything?

I don’t know. I don’t know. The thing that’s even more horrifying is most of those Weinstein accusations, the ones that have brought down powerful white men, Matt Lauer, Fox News. They all happened in the past. Remember the Lauer story? He had a button in his office that he could seal the door and harass a woman who is in his office. Imagine you’re walking by that office and you hear screams and you keep walking. Well, that’s what’s happening with Kelly, because if we believe these parents in Florida, these parents in Georgia, these parents in North Carolina, their daughters who are now of legal age are being held against their will. Mentally, physically abused, separated from their parents, told when to eat, when to sleep, when to dress, how to pleasure him in encounters that he records, and they’re punished if they break any of his so-called rules. These are women who are in trouble right now as you and I talk. Aside from well-being check in Illinois, one well-being check in Georgia, law enforcement’s done nothing. Live Nation has done nothing. Sony Music has done nothing. The activists in the new R. Kelly movement are trying to raise awareness, but these women are locked behind the door right now.

I feel like he is such a unique case. And maybe part of that is because it is the music industry and there is this history of sexualizing young girls. It’s part of the culture.

For someone who has been writing about rock and roll as my all-consuming passion since I was 14, it sickens me to the core of my being because I believe your life can be saved by rock and roll. But the thought that it also can be used for this other far more nefarious, soul-killing purpose, it makes me sick to my stomach. Curtis Mayfield sang songs and helped fuel the civil rights movement. R. Kelly sings songs that drive his alleged sexual predation.

Well, I think we just keep on talking about it. I’m glad that other people are finally writing about it . . . . I welcome that. Bring them on. Women are in trouble right now and women have been hurt for thirty years, and aside from Aaliyah, no one has ever cared about any of them. Bring it on.