I got Zucked: Cambridge Analytica may have my Facebook data now

Good job, Zuck! One of my Facebook friends took that garbage quiz. Does Steve Bannon know my birthday now? 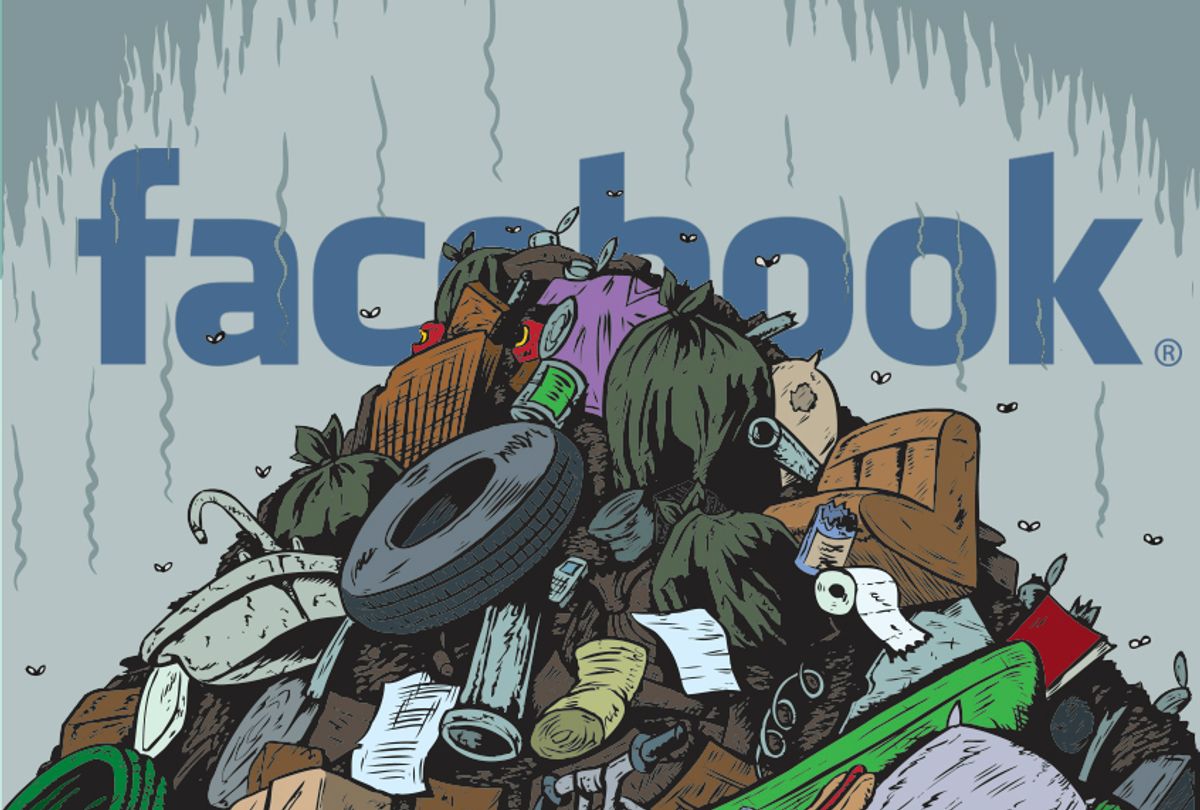 Today I learned via a message in my Facebook feed that at least one of my 1,300 friends was among the 270,000 who played along with the now-infamous personality quiz app “This Is Your Digital Life” in 2014. Designed by psychology professor Aleksandr Kogan, the app scraped private information from participants’ profiles, which potentially includes information from their Facebook friends — to the tune of an estimated 87 million users — and “improperly shared” it with Cambridge Analytica, a political data firm founded by conservative mega-donor Robert Mercer and Steve Bannon, who went on to head up Donald Trump's presidential campaign. Whistleblower Christopher Wylie now says Bannon wanted the Facebook data to support Republican and alt-right candidates for U.S. office.

Because friendship apparently means never barring your former neighbor, your 11th grade study buddy or a guy you once worked with four jobs ago from handing over a record of all the random things you’ve approved of on Mark Zuckerberg’s platform, Cambridge Analytica probably knows where I live, how old I am, and that I am a total fangirl for the J. Peterman Company. (My caftan game is strong.)

Thanks, Zuck! All that juicy info handed over without a fight and Steve Bannon didn’t even send an Edible Arrangement for my birthday, which he can’t say now he doesn’t know.

"We understand the importance of keeping your data safe," Facebook tells me with, I assume, a straight face, before detailing what Cambridge Analytica could have had on me for the last few years because a friend used their app. "There is more work to do, but we are committed to confronting abuse and to putting you in control of your privacy."

In a post-Snowden landscape where memes about being spied on by your own personal FBI agent flourish, the idea that I could be in control of my own digital privacy is downright quaint. But this hand-off of my personal information is as shady as it sounds. While back in 2014, the data-scraping itself didn’t violate the platform’s privacy rules for third-party applications, snitching it out to Steve Bannon did, according to Facebook.

It's true that I have no idea how my information was used, if at all. It's unclear what psychographic profile can be constructed from my affinity for the Jim Henson holiday classic “Emmett Otter’s Jug Band Christmas”; and on the scale of advertising-persuadable 2016 voters I'm probably a "Huma Abedin," so who knows if the information Facebook allowed my friend's app to scrape from my profile was ever used for anything nefarious. But that’s not really the point.

Look, I’m not an innocent. I know that on a free platform like Facebook, I am the product being pitched to advertisers. This is an agreement I entered into willingly, and I am actually not complaining about that. According to my records, Facebook already had me pegged as “very liberal,” a frequent traveler and an engaged shopper for its own advertising purposes, which are quite effective as the pairs of shoes I have purchased off in-feed ads demonstrate. Take my one-sentence rave review of “Black Panther” or my vacation photos from Bogotá and try to sell me more of the same — fine.

I know that every keystroke and click I make on the internet is stored somewhere and used by someone to try to get me to buy something. I grew up following the storylines of fictional cartoon characters created by toy companies with the sole objective of selling me their plastic figurine likenesses. I have a distinct preschool memory of consciously reading the word “McDonald’s” on the sign, after I learned my ABCs and what the big golden arched M stands for. I’m an American. Someone’s been trying to sell me something since the day I was born.

But allowing someone else to to dig around in our pockets without our knowledge and give whatever they fish out to people associated closely with a presidential campaign without asking first is something entirely different. Facebook’s failure to ensure such loopholes were not available for exploitation is a breach of trust — however thin that trust was in the first place — and carries with it a certain amount of moral culpability at the very least. After all, it was Facebook that convinced so many people to be extremely themselves online — to become the willing product — in the first place.

Back in the day, before Facebook and Twitter and Instagram and Snapchat, if you used social platforms like message boards or blog services or chat rooms, you probably used a pseudonym of some sort. Real names were for professional lives; if you had an online social life, you used a handle, preferably untraceable to your actual identity, to keep your anonymity and to ensure some measure of privacy when talking to people you hadn't ever met face to face. Posting under your full name was the sign of a naïf, hence the enduring popularity of the 1993 New Yorker cartoon captioned, "On the Internet, nobody knows you're a dog."

Early networks like Friendster and MySpace, where users could create personal profiles, chiseled away some privacy paranoia. But one theory of why Friendster withered on the vine is that it lacked exactly what made Facebook so successful. Friendster didn’t understand that what makes a social network strong is its emphasis on social. As PC’s Peter Pachal writes in this insightful autopsy, Friendster died for a lack of what Facebook ended up pioneering: the news feed.

I remember first logging on to [Friendster], and seeing a big empty profile to fill in with photos, personal details, interests, and the like. But once I had a meaty profile (right down to my timely lamenting of the end of Buffy the Vampire Slayer), the next thing to do was… what, exactly? Sure, there were testimonials for friends, but after writing the half-dozen or so I actually wanted to write, it seemed that the only thing to do on Friendster was polish my profile.

When Zuckerberg launched Facebook’s news feed in 2006, it changed the game.

While the site was still attracting new people, he revamped it to elevate the news feed's importance, pushing apps and boxes to the rear and putting friends' updates, shares, and discussions front and center. Even the popular Facebook status update became more like a Twitter message, dropping the "so-and-so is eating bacon" format and losing its special prominence on profile pages.

Naturally, users freaked. But Zuckerberg stuck with his gut, and a funny thing happened. People got used to the new design. They started to miss their apps less and less. They started commenting on everything. And (most) stopped caring about how many friends they had. Along the way, Facebook got bigger than ever.

Facebook's popularity, then, made an account a standard tool for staying connected, and its real-name mandate made attaching your first and last name to your online social life the new standard. It’s way more difficult to pretend to be someone or something you’re not when your mom, your third grade best friend and the co-worker from two cubicles over are watching, so we became more and more comfortable being our full selves on Facebook. We gave up anonymity for the convenience of having pretty much everyone we knew, or ever did know, available to us on one social platform and findable by name, and now every day it seems we're finding out a new consequence for assuming that everyone involved plays by the same transparency rules.

In today's Senate hearing, Dick Durbin (D-IL) asked Zuckerberg if he'd be comfortable sharing which hotel he stayed in last night. "Um, no, I would not," said Zuck.

Durbin pressed on. "If you messaged anyone this week, would you share with us the names of the people you messaged?"

"Senator, no, I wouldn't choose to do that publicly here."

You and me both, Zuck. So where do we go from here?

Cybersecurity expert Bruce Schneier, a fellow with the Berkman Klein Center for Internet & Society and the Belfer Center for Science and International Affairs at Harvard's Kennedy School, told the Harvard Gazette last August that individual actions we can take to safeguard our digital privacy have a relatively minor impact. "The best recommendation I have for people is to get involved in the political process. The best thing we can do as consumers and citizens is to make this a political issue. Force our legislators to change the rules," he said, because opting out of using digital tools entirely isn't an option:

And “buyer beware” is putting too much onus on the individual. People don’t test their food for pathogens or their airlines for safety. The government does it. But the government has failed in protecting consumers from internet companies and social media giants. But this will come around. The only effective way to control big corporations is through big government.

Zuckerberg has indicated that he'd be open to U.S. customers having access to European-style privacy tools, which could be a start. But it could be too little too late for many of his products — aka people — who are now reevaluating their Facebook use.

Zuckerberg deserves all of the backlash he's receiving of late, but it's not like his is the only site that knows our secrets. For all that Facebook remembers about my shopping and social habits — to say nothing of what my personal FBI agent, to whom I just waved, has seen — Google, the keeper of my search history and my personal email accounts, has the real goods. The thought of it is too great to bear some days, but what's the alternative? I'm pretty sure I can't just nuke 20 years of online life and start over as a dog.