It doesn't matter what Trump does — he won't lose his base 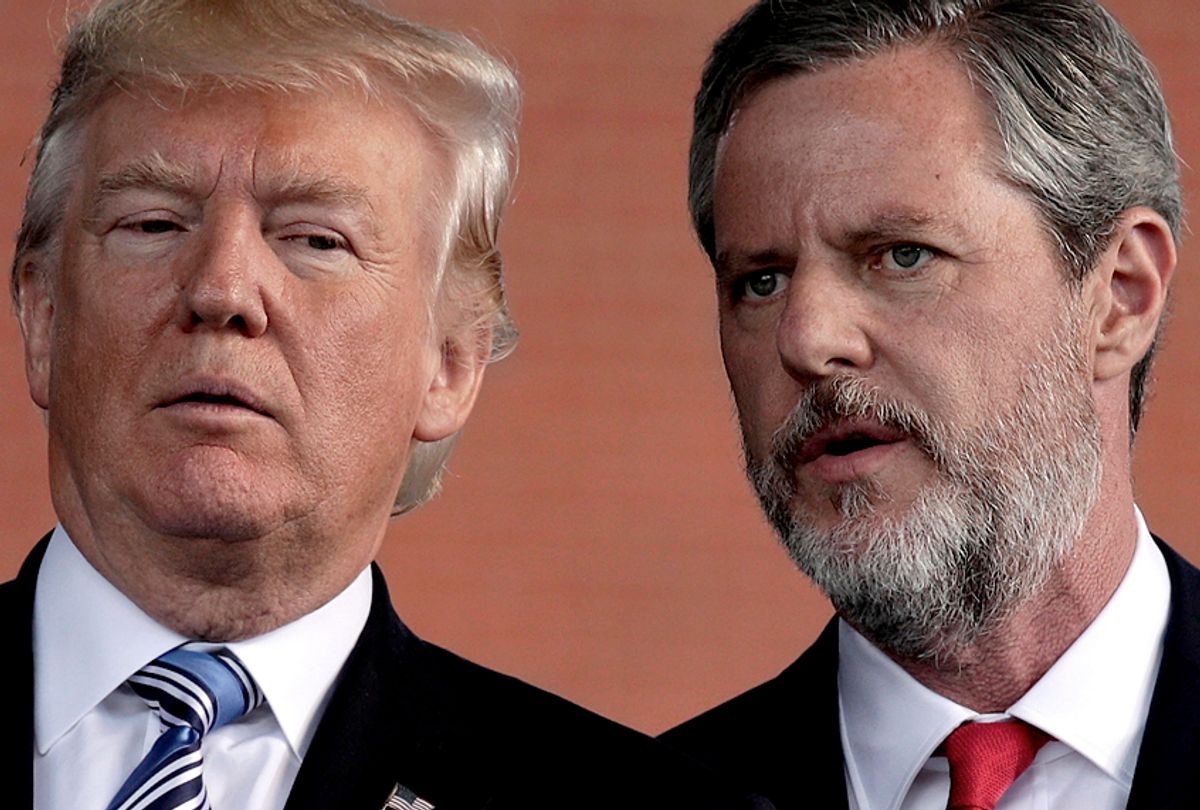 Evangelicals represent one of Trump's strongest bases. Even as the rest of America has wavered on whether or not they support him, favorability among evangelicals is far higher than his standing with the rest of the country, which hovers at 42 percent.

Since late 2015, white evangelicals have steadily increased their support, and dramatically so. In October 2015 his favorability was just 48 percent among the group.

This doesn't seem to be a religious attitude. After all, it doesn't seem to matter to evangelicals that the president has never acted in accordance with the standards evangelicals often claim to uphold. It doesn't even matter that Trump is accused of having extramarital affairs a decade ago; more recently, Trump has shown evangelicals very little proof that he is a religious man. On the campaign trail, Trump said he loved the Bible, but he refused to (or simply couldn't) name verses he was particularly fond of. During that interview, Trump said he was equally attached to the Old Testament and New Testament, adding "The whole Bible is just incredible."

Early campaign era Trump also compared that good book to his best-seller, "The Art of the Deal," later in the campaign, Trump seemed to have forgotten about the Bible completely, telling "Extra" a week before the election that his two favorite books were ones about him.

White evangelicals, by and large, have ardently defended the president through and through, and there are currently no indications that will change, even though Trump has eschewed the message of peace on Earth.

On Easter Sunday, Trump's message to DACA immigrants, who were brought to the United States as children and have known no other home, was that they were not welcome to stay in this country. He exploded on Twitter on Easter morning with tweets about needing a border wall, and slammed "ridiculous liberal (Democrat) laws."

When he spoke at the annual Easter Egg Roll the next day, Trump sounded as if he was freewheeling at one of his campaign rallies. He touted the massive $700 billion military budget and the economy.

In reality, Trump's rhetoric or actions simply just don't matter to evangelicals, because he has supported and helped advance the religious group's political agenda. His optics, his inhuman policies or his un-Christianlike behavior are not deal-breakers, and likely never will be.

Jerry Falwell Jr., the president of Liberty University, has been one of the leading evangelical figures that has expressed devout support for Trump. Last August he said that Trump says what's in his heart and was not one bit of a racist.

"One of the reasons I support him is because he doesn't say what's politically correct, he says what's in his heart," Falwell Jr. said. "And sometimes that gets him in trouble. But he does not have a racist bone in his body."

But Trump's ties to the evangelicals also prove something deeper about the identity of conservatism. To examine why evangelicals have supported Trump, the answer is found in a simple question: why wouldn't they?

Conservatism and racism are now one and the same thing in post-civil rights era America. Donald Trump is the human embodiment of that convergence and an avatar for white identity politics and white rage. Right-wing Christianity is central to the triumph of white supremacy over the Republican Party. Right-wing evangelical Christians supported the American apartheid of the Jim and Jane Crow era and now support Trump's "Make America Great Again" (i.e., white again) agenda. The global color line is a story of continuity that is often masked by superficial change. Trumpism is not a surprise; it is another iteration of the white rage and white backlash politics that have plagued America since before the founding.

Movement conservatism, after all, can be considered a type of political religion. It relies on untrue fables and faith divorced from empirical reality, it drives out heretics and other non-believers and it offers a creed and rites which are not to be questioned or violated under any circumstances. In total, American conservatism at present is deeply fundamentalist. But it is also deceptively inclusive: authoritarians, bigots, racists, misogynists, white supremacists, nativists, gangster capitalists, the willfully ignorant and anti-intellectual, and those who eschew reason for passion are all welcome.

Trump's global unpopularity has had a "major impact on how the world sees the United States," a Pew Research Center study highlighted last year. But he's been able to cling to his most devout supporters, like evangelicals, to keep his presidency afloat.