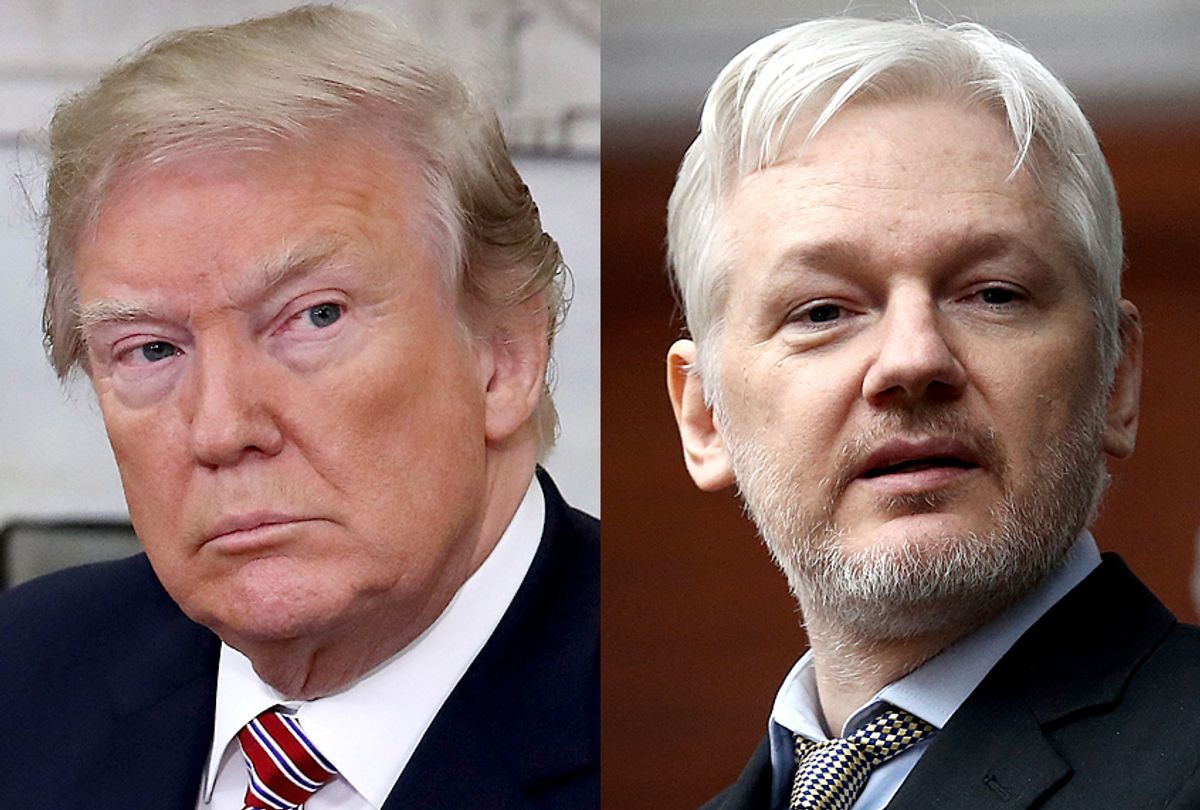 The DNC has filed a lawsuit against Trump's 2016 presidential election campaign, the Russian government and WikiLeaks, alleging that the trio colluded to meddle in the 2016 contest between Trump and Democratic candidate Hillary Clinton, according to The Washington Post. The multimillion dollar suit was filed in a federal district court in Manhattan and points to the hacking, theft and dissemination of documents from the Democratic Party's computer networks as proof that the party had been damaged by the Trump campaign's alleged collusion.

"During the 2016 presidential campaign, Russia launched an all-out assault on our democracy, and it found a willing and active partner in Donald Trump’s campaign," DNC Chairman Tom Perez explained in a statement. "This constituted an act of unprecedented treachery: the campaign of a nominee for president of the United States in league with a hostile foreign power to bolster its own chance to win the presidency."

The inclusion of Russia isn't something to celebrate, though. Suits in American courts can't contain plaintiffs consisting of foreign countries. But because the incident in questions involved trespassing on the Democratic Party's private property, the DNC is arguing that Russia's government should not be immune on this occasion.

"The DNC claims arise out of Russia’s trespass on to the DNC’s private servers... in order to steal trade secrets and commit economic espionage," the lawsuit argues.

But the suit is aimed at Trump — aiming to uncover the truth over whether or not there was collusion between Trump and Russia.

It is an issue that Trump has clearly established he wants put to rest. Former FBI Director James Comey has claimed that Trump referred to the ongoing investigation as a "cloud" over his presidency, and the president's belief that Attorney General Jeff Sessions' decision to recuse himself from the Trump-Russia investigation has caused the probe to continue has caused a bitter falling out between the two former friends.

Trump has also repeatedly and emphatically denied that there was any collusion between himself and Russia, to the point where the phrase "no collusion" has practically become a political talking point for his administration. As of mid-January, the administration — through either the president himself or one of his press secretaries — had denied collusion with Russia on 146 occasions, according to The Washington Post. The drumbeat has continued unabated since then, with Trump even issuing another denial via Twitter on Thursday night.

Even though a wealth of evidence has come out suggesting at least some level of collusion between the Trump campaign and Russia — including a June 2016 email exchange involving the president's son and campaign advisers planning to meet with a Kremlin-connected lawyer to get "dirt" on Hillary Clinton, and former Trump campaign staffer George Papadopoulos triggering the whole investigation by admitting to meetings with foreign agents  — the president has continued denying that any collusion occurred.

New information regarding the timeline of the hacks was mentioned in the Post's report on the DNC lawsuit:

The suit contains previously undisclosed details, including that the specific date when the Russians breached the DNC computer system: July 27, 2015, according to forensic evidence cited in the filing.

The analysis shows the system was breached again on April 18, 2016. The hackers began siphoning documents and information from DNC systems on April 22. The suit notes that four days later, Trump foreign policy adviser George Papadopoulos was informed by Josef Mifsud, a London-based professor, that the Russians were in possession of thousands of emails that could be damaging to Clinton.

There is a considerable amount of circumstantial evidence that ties Trump to Russia, from his business ties and seeming sympathy for Russian President Vladimir Putin to his decision to surround himself with pro-Russia advisers like Manafort and former national security adviser Michael Flynn. WikiLeaks founder Julian Assange also has a number of ties to Russia, from requesting Russian protection in the Ecuadorian embassy to denouncing the Panama Papers on the grounds that they were embarrassing to various Russian officials.

While the decision to sue the parties allegedly responsible for sabotaging the Democratic National Committee's campaign to elect Hillary Clinton may seem strange, such a suit has several legal advantages. For one thing, there is a lower burden of evidence required to succeed in a legal case that occurs at the civil level — a preponderance of evidence (the so-called "50 percent plus one" standard) dictates judgments rather than the burden of proof beyond a reasonable doubt. Moreover, such a lawsuit puts the fate of the Trump-Russia scandal out of the president's immediate reach, since he would not have the power to simply fire the people pursuing him through that legal venue.

As the Post noted, the Democratic Party used a similar tactic during the Watergate scandal and found that it was effective then:

The lawsuit echoes a similar legal tactic that the Democratic Party used during the Watergate scandal. In 1972, the DNC filed suit against then-President Richard Nixon’s reelection committee seeking $1 million in damages for the break-in at Democratic headquarters in the Watergate building.

The suit was denounced at the time by Nixon’s attorney general, John Mitchell, who called it a case of “sheer demagoguery” by the DNC. But the civil action brought by the DNC’s then-chairman, Lawrence F. O’Brien, was ultimately successful, yielding a $750,000 settlement from the Nixon campaign that was reached on the day in 1974 that Nixon left office.

Not everyone is convinced that the lawsuit is a good idea, however.

"This is mostly either a publicity or a fundraising stunt," Ilya Shapiro, senior fellow in constitutional studies at the conservative Cato Institute, told Salon. "I guess it has some nuisance value as well, to try and get at some documents that they might not otherwise have. It's throwing the kitchen sink into court. They're suing everybody under the sun, including the entire general staff of the Russian Armed Forces."

Shapiro also described the lawsuit as "a really good piece of creative nonfiction" and argued that it was "literally relitigating the 2016 election." He said he didn't think the suit had a real chance to get to the trial portion, saying, "there will be a motion to dismiss very quickly." Shapiro speculated the suit will ultimately go away after the motion has been appealed by the Democrats.

"I don't think this is legally serious," Shapiro said. He also acknowledged that he has doubts about the ongoing probe into the Trump-Russia scandal.

"I highly doubt that there was collusion of the nature that rises to some sort of criminality," Shapiro told Salon. "I'm sure that the incentive of a prosecutor, special counsel or otherwise, is always to find something and to prosecute for something and to get a conviction for something."

The DNC's lawsuit constitutes the second time this month that a legal action against Trump has been pursued in a way that avoids the legal specter of Trump firing special counsel Robert Mueller. The raid on the office of Trump's lawyer Michael Cohen, though initiated in part due to Mueller's referral, occurred due to a series of search warrants from the U.S. Attorney’s Office for the Southern District of New York, according to The New York Times.