What, you didn't have a blowout and high heels after you gave birth? 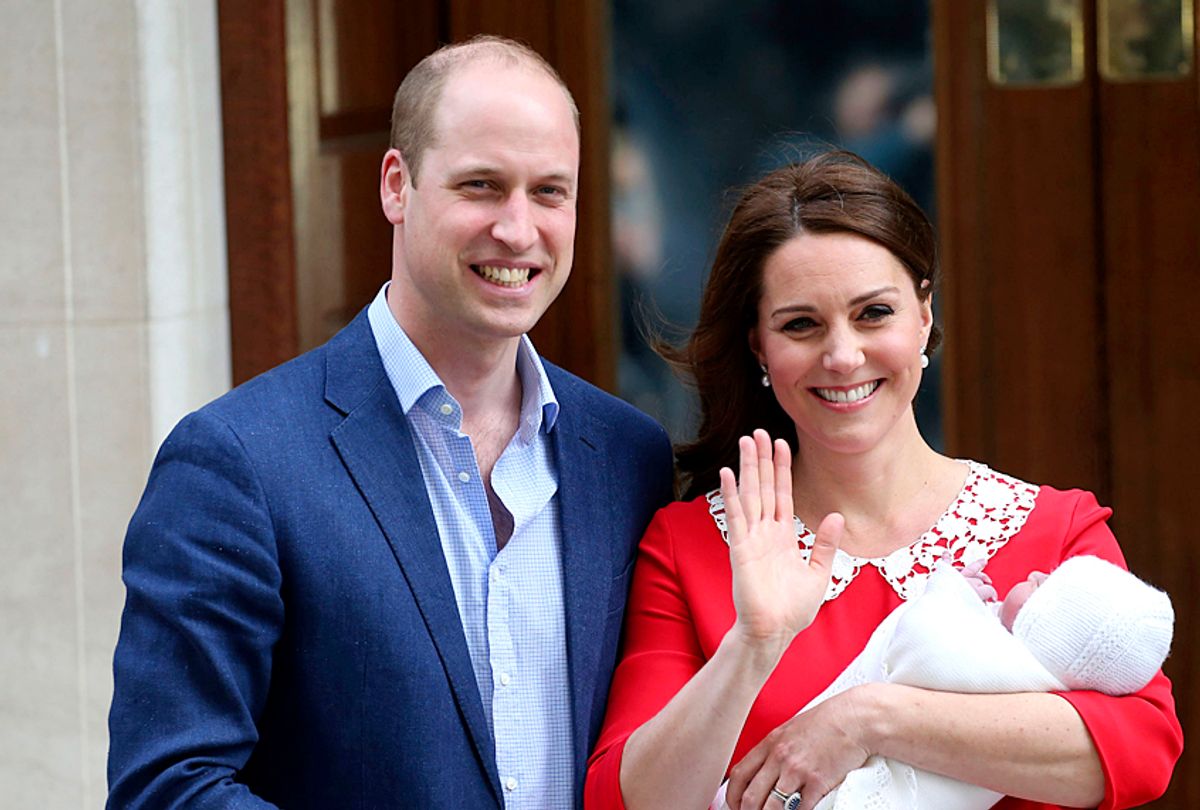 Prince William and Kate, Duchess of Cambridge pose for a photo with their newborn baby son as they leave St Mary's Hospital in London, April 23, 2018. (KGC-22/STAR MAX/IPx)
--

There's no doubt that being married to a future king of England and mother to the heir to his throne comes with an expectation of elegance. And Catherine, Duchess of Cambridge has exceeded all requirements throughout her seven years as a member of the royal family, exuding a confident style and shampoo commercial worthy hair. But she really upped the game on Monday, when as the Palace announced, she was "safely delivered of a son at 1101hrs" and then emerged from the hospital just a few hours later, looking goddamn flawless.

The former Kate Middleton left St. Mary’s Hospital Monday to an elated throng of press and well-wishers with her husband by her side and her newborn son in her arms. She wore a red Jenny Packham dress that nodded to the crimson frock her late mother-in-law Princess Diana wore to debut Prince Harry nearly 34 years ago, nude pumps and full hair and makeup. A planet full of humans who don't look that pulled together when they haven't pushed out an eight-pound child earlier in the day was impressed (My current status: bagel crumbs on pants).

This isn't the Duchess's first rodeo — the new prince is her third child, and she's looked utterly radiant with each post-hospital appearance. But when Prince George was born five years ago, she waited a full day before stepping out before a public already eager to speculate on her "post-baby bod." The efficiency with which Her Royal Highness managed to transform herself this time — even with a likely formidable beauty squad — seemed record setting. It's also as wildly atypical as say, having your face on commemorative plates.

I have given birth twice in my life and in my first photos with my babies, I look like an actual monster. A monster who has just been taken by surprise. But even if I'd managed the small dignities of running a comb through my hair and applying some lip balm in the immediate aftermath of labor and delivery, I would still have been up against the somewhat gruesome realities of the postpartum form. Let me get real with you for a moment on that front.

Whether or not you're a duchess, the time following birth includes a decent amount of bleeding and clotting — sometimes for weeks. It's not uncommon for a new mom, who is wearing about four maxi pads in her granny panties, to pass stuff that looks like raw liver. Her vaginal area will feel like it is on fire. The mere thought of peeing will make her cry, and her doctor will hand her stool softeners and an inflatable donut because she's positive right now that never wants to attempt pooping again. She may, however, sneeze and pee herself anyway. Is she familiar with the term "sitz bath"? She will be! Her breasts, alert to someone nearby who desires a nosh, will begin to ache and tingle. Her hands, face and feet may immediately begin to swell — I left the hospital with my babies not in fashionable high heels but skid-proof socks, because none of my shoes fit my edema-swollen feet anymore.

The new mom is also experiencing cramping, possibly intense, as her uterus begins to retreat back to its pre-pregnancy dimensions. BabyCenter notes that "Afterpains are typically mild for first-time moms (if you feel them at all) and don't last long. But they can be quite uncomfortable after a second delivery and usually get worse with each successive delivery." And then there are the mood swings from the sudden hormonal changes. Kate, how are you even smiling?

Royal childbirth has evolved over time, but one constant is that it's often been an example to others. After Queen Victoria discovered the "blessed" joy of twilight sleep — aka chloroform — for the birth of her eighth child, she set a style among fashionable mothers-to-be for similar knockout tactics. Queen Elizabeth carved a new path by being the first monarch to have her spouse in the delivery room with her. Princess Diana ushered in an era of royals not retreating from the public eye during pregnancy, and of giving birth in the hospital. When she and Prince Charles showed Prince William to the world a day after he was born, Diana declared her son "in excellent form, thank goodness – and looking a bit more human this morning." As surely was she. Now, Kate has set the standard for appearing as polished as a local news anchor at a time when most women can still barely stand up. There's a reason lots of new moms get rolled out of the hospital in a wheelchair. She reflects the popular desire for an Instagram-worthy first image of motherhood, one that's serenely, effortlessly pretty.

It would be unrealistic to expect a royal to step out with her brand new baby looking like Nick Nolte's mugshot. The duchess is the beautiful mother of three beautiful children, and also a lady who lives in a palace. And while I wish every new mother as much as ease and comfort as possible, I am also happy to provide the reality check that birth involves blood and exhaustion, and that nobody looks that glamorous when they get home and park on that inflatable donut.