Once "Suits" says goodbye to Meghan Markle, the nuptial pre-game for her wedding to Prince Harry is officially on 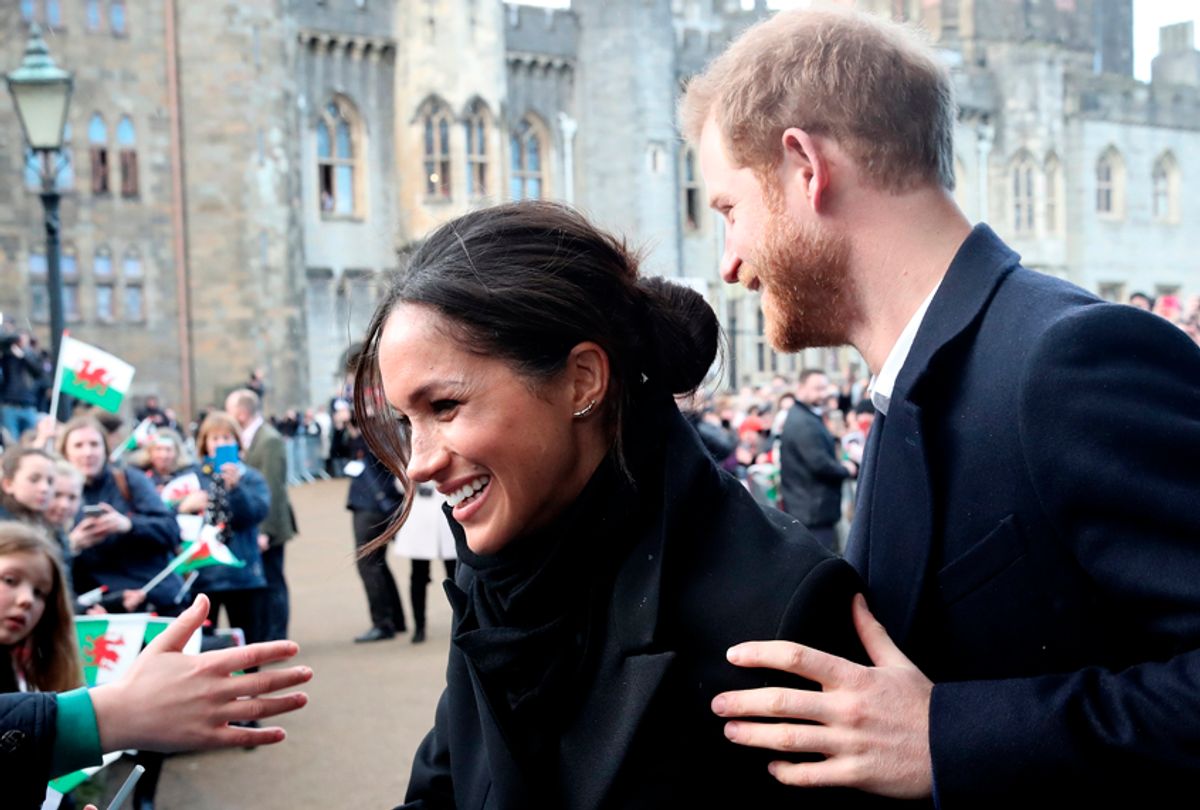 Wednesday night’s season finale episode of USA Network’s hit drama “Suits” marks Meghan Markle’s departure from the series that made her a star. That chapter ends with, what else? A wedding.

Nuptial plans already were in the works for Markle’s character Rachel Zane and her fiancé Mike Ross (Patrick J. Adams, also leaving the show) but circumstances, within the show and in the real world, inspire them to move up the joyous event.

I’m not giving anything away in saying the result is elegant, intimate and flawless. All in all, it’s a suitable send off for a woman leaving her career in Hollywood for a more regal life in Windsor Castle, not to mention her happily ever after (fingers crossed!) with a genuine prince, His Royal Highness Prince Henry of Wales.

Although CBS News aired “Meghan Markle: American Princess” on April 20, the Gayle King-hosted special did not result in the ratings equivalent of Guy Fawkes Night fireworks, netting a modest 5.18 million viewers. That could be interpreted as a sign that Americans may not care as much as the media suspects we do. Don’t be so certain.

It’s more likely that CBS came out swinging a bit too early in its effort to plant the network flag on Royal Wedding coverage. But after Markle's final farewell kiss on “Suits,” which is happening Wednesday at 9 p.m., button up — it’s off to the races.

Thus in keeping with the tradition of the royal town crier: oyez, oyez, oyez! on Saturday, May 19, NBC and CBS will start their coverage of the event from Windsor Castle (or a vantage point nearby) where, in St. George’s Chapel, the couple is set to wed. In the United States, the fun begins in the wee pre-dawn hours on the East Coast.

That would be 4 a.m. Eastern for King, Kevin Frazier and Tina Brown on CBS, and 4:30 a.m. for NBC’s Savannah Guthrie and Hoda Kotb, the latter of whom might trade in her signature “Today” show morning wine for a champagne glass, if not a strongly brewed pot of Earl Grey.

Surely ABC, whose parent company, Disney, all but invented the Princess Industrial Complex, is dreaming up its own live coverage plans. So far it has announced a special royalty-themed "20/20" airing Friday, May 18 at at 10:10 p.m., that examines the similarities between Markle and Diana, Princess of Wales. This is followed by a second "20/20" airing Saturday, May 19 at 10 p.m., in which ABC's David Muir and Deborah Roberts  join us in our collective wedding day afterglow.

ABC also has four-hour prime time event in the works titled “The Story of The Royals," but that won't debut until August.

None of the other broadcasters could possibly outdo the efforts PBS is putting into the pre-wedding march festivities. Long the United States audience's main conduit for top-notch British programming, and erstwhile home of “Downton Abbey,” public television is going all out for Harry and Meghan: Its live broadcast of the wedding service will cap five nights of coverage, running at 10 p.m. Monday, May 14 through Thursday, May 17 , and at 10:30 p.m. on Friday, May 19. It will be co-hosted by Meredith Vieira and British television presenter Matt Baker.

Note the subtle differences. Fox’s show runs for two hours starting at 8 p.m. on Friday, May 11, even though CBS barely held the viewer’s attention with one. Also, in lieu of Gayle King, Fox promises insight from none other than Piers Morgan, and that makes me wonder whether Gordon Ramsay was not available.

I’m only half joking. Ramsay cleans up well, and when he’s not screaming at would-be chefs who aren’t living up to his expectations, he's actually fairly genteel.

Anyway, two days after Fox’s bliss comes the Lifetime movie — of course there’s a Lifetime movie! — “Harry & Meghan: A Royal Romance,” debuting Sunday, May 13 at 8 p.m. You may recall that in 2011, Lifetime gave the same treatment to those other Royals in the form of “William & Kate: The Movie” starring Nico Evers-Swindell and Camilla Luddington as the Duke and Duchess of Cambridge.

“Harry & Meghan: A Royal Romance” certainly sounds more dignified that “Harry & Meghan’s Excellent Adventure” or “Harry & Meghan Go to a White Castle”; at any rate, the groom will be portrayed by Murray Fraser while the bride will be played by Parisa Fitz-Henley. It is entirely appropriate to respond to that news with some version of, “Who dat is?”

Similarly, as we’ve previously noted, it’s also completely fine to ignore all this pomp and pageantry, although the voluminous coverage of Markle’s fashion choices could make that impossible. Very few of us knew who Kate Middleton was before she married Prince William and became Catherine, Duchess of Cambridge, but even those of us who hid under a rock could not escape the tiny hat revolution sparked by that royal wedding’s impressive fascinator parade.

Neither is it my intention to add another expository essay as to why Americans continue to be obsessed with British Royalty to the hundreds currently recycling in our news stream. Instead, may I simply suggest that this focus on uniting the houses of a commoner from a former British colony with the Windsors offers respite from the maladroit, disordered tactlessness that has overrun our own palaces of governance.

We can celebrate that Markle, a mixed-race American divorcée who used to be a suitcase model on “Deal or No Deal,” stands as an example that even stratospheric romantic dreams are possible for American women to attain. We can mourn ever-so-slightly at the reports that she’s being subjected to etiquette and elocution lessons that would likely make Eliza Doolittle’s skull explode. We can roll our eyes at how outdated and paternalistic the continued enabling of a Western monarchy looks in the modern age.

The greater takeaway from all of this head-spinning coverage is that this wedding symbolizes that grace and dignity, as well as the certainty offered by traditional norms, are not dead. Such reminders can be calming. Those very same truths fuel repeat marathon viewings of "The Crown" on Netflix and "Victoria" on PBS. Stilted as royalty can seem to casual and comfort-focused Americans, the illusion of propriety and quietude in those series can feel therapeutic.

We may profess that we shun those concepts, that tradition can be constraining and when a declared adherence to such is taken to extremes, it can result in evil. That’s completely true.

This is a wedding we’re talking about, people. For crying out loud, brides around the country are being suffocated by boned foundations and familial demands to adhere to their own tradition and order, like walking around all day in heels with pennies in them, smiling all the while. We just don’t hear about the travails of those women.

And while decades of covering Prince Harry enables many us to rattle off all of his stages of development, from the bereft toddler left motherless after Diana's death, to his wild child phase, through serving in the military and his charity ambassadorships, his settling down was predestined.

Markle, however, is a lovely surprise. She’s this age’s Grace Kelly — sophisticated, media savvy and successful, as described in CBS’s special. A friend who attended Northwestern University with Markle describes her as impossibly stylish, and effortlessly so. “She’s going to be a princess,” another sorority sister of Markle’s observes, “and I’m driving to Costco!”

Point being, here’s an American woman who probably used to wear sweats and flip-flops like the rest of us, and who is in a real way rising above the mess most of us are living in.

Markle, her prince and in-laws are still part of our world and stand to be impacted by the worst of what could happen, terrors we’re praying we never see and fear we may live to.

So for a few hours, days — a week, even — there's no harm in turning our gaze toward visions of gemstones and tulle that aren’t garish or braggadocious.

Naturally, plenty of people will scoff at this suggestion. "Who needs all that?" they may ask.

Don't be surprised if the response is a resounding chorus of, "I do."