Even though the House Intelligence Committee is led by Rep. Devin Nunes, their report didn't let Trump off the hook 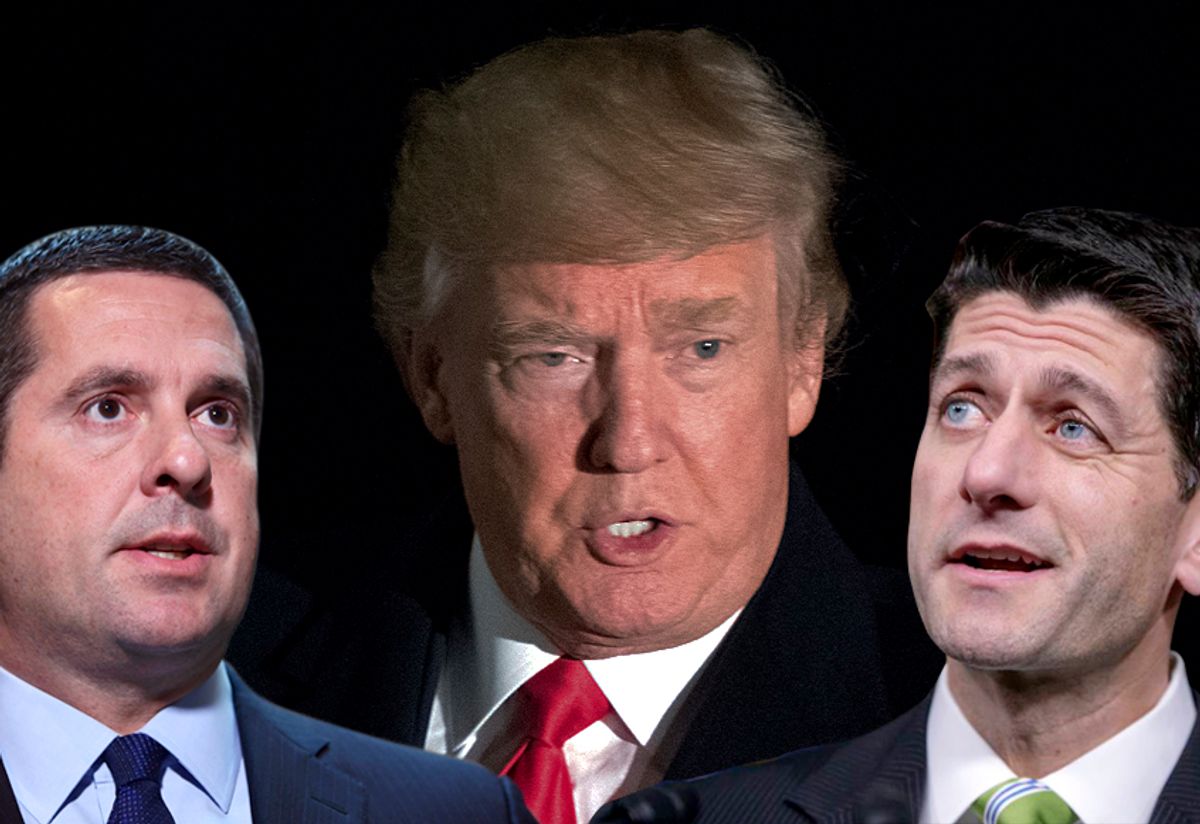 The House Intelligence Committee may be led by a man who has gone out of his way to carry President Donald Trump's water for him, but even their report closing an investigation into alleged collusion between the Russian government and the Trump campaign couldn't help but throw some strong criticisms in the commander-in-chief's direction.

The report found that Russia had engaged an extensive information warfare campaign during the 2016 presidential election and determined that a number of parties deserved criticism, according to Reuters. These included the FBI, which was described as having done an "inadequate" job of notifying hacking victims, and President Barack Obama, who was deemed to have responded to news of Russia's hacking in a half-hearted manner.

Yet the report also contained surprisingly harsh words for the president's campaign. It blasted the Trump team for meeting with a Kremlin-connected lawyer, Natalia Veselnitskaya, in June 2016 because she claimed to have "dirt" on Hillary Clinton, the Democratic candidate. The report also pointed out that the Trump campaign should not have praised WikiLeaks or its founder, Julian Assange, describing the interactions with the ostensible whistleblowing group (that is, let's be honest, more a Russian puppet now) as "highly objectionable and inconsistent with U.S. national security interests."

This doesn't mean that the report can be viewed as an impartial or even thorough document. As Democrats on the House Intelligence Committee explained in their own 98-page report, the Republican documented "reflects a lack of seriousness and interest in pursuing the truth." As Ranking Member Adam Schiff explained in a statement, "Throughout the investigation, Committee Republicans chose not to seriously investigate - or even see, when in plain sight - evidence of collusion." He also claimed that the Democrats would continue their own investigation alluded to "new documents from another important witness" that they had recently received.

In a similar vein, Democratic Sen. Mark Warner of Virginia told Yahoo! News' "Skullduggery" podcast on Friday that the Senate Intelligence Committee, of which he is the Ranking Member, plans on continuing to proceed with their investigation in a cautious and deliberative manner.

"I would rather do it thoroughly than do a half-baked report that leaves a lot of questions hanging," Warner said. He also added, when asked about what conclusions they would arrive at, that "it’s too early to tell. We’ve still got a series of witnesses to see. We got thousands of additional documents just within the last two weeks."

This is in stark contrast to the approach embodied by the House Intelligence Committee, where Chairman Devin Nunes made it clear from the get-go that he had no interest in pursuing the investigation in ways that could politically hurt Trump. Last year Nunes worked with the Trump White House to manufacture a story that implied President Barack Obama had engaged in unethical behavior in monitoring the Trump campaign. Although he supposedly recused himself from the investigation during the controversy that ensued, he clearly continued to involve himself in the investigation. In so doing, he has continued the close alliance he forged with Trump by being one of his first congressional supporters during the 2016 presidential election and later advising his transition team after the election.

It later came out that Nunes had told a group of Republicans at a Tulare County Lincoln Dinner that Democrats wanted an independent commission to investigate potential Trump-Russia collusion because "they want to continue the narrative that Vladimir Putin and Donald Trump are best friends, and that’s the reason that he won, because Hillary Clinton would have never lost on her own; it had to be someone else’s fault."

Nunes again made the news in February when he released a memo that Republican partisans claimed would discredit the Trump-Russia investigation but wound up disclosing unremarkable observations.

The deeper concern about the House Intelligence Committee's handling of the investigation isn't simply that it's failing to do its job. It is also that, by repeatedly trying to deflect blame away from Trump, it is providing the president with both rhetorical and political ammunition.

As an example of the former, here is the tweet Trump posted in response to the committee's report.

As an example of the latter, consider how Trump has repeatedly tried to fire Robert Mueller, including as recently as December. In order to offset this possibility, on Friday the Senate Judiciary Committee approved a bill that would protect Mueller from being terminated, according to Politico.

That bill harkens back to Warner's aforementioned interview with Yahoo! News. During the interview, Warner also noted that his fellow senators have a plan in place should Trump to fire either special counsel Robert Mueller or Deputy Attorney General Rod Rosenstein.

"We have a strategy that will take place if he takes these actions. But to get lured into kind of where the president’s allies want to go — to turn this election into what would happen if the Democrats take over and impeachment — that’s not where I’m headed," Warner told Yahoo! News.