In "Westworld," the revolution is being televised

We can choose to see our struggle reflected in "Westworld," and Dolores. Or it can look like nothing at all 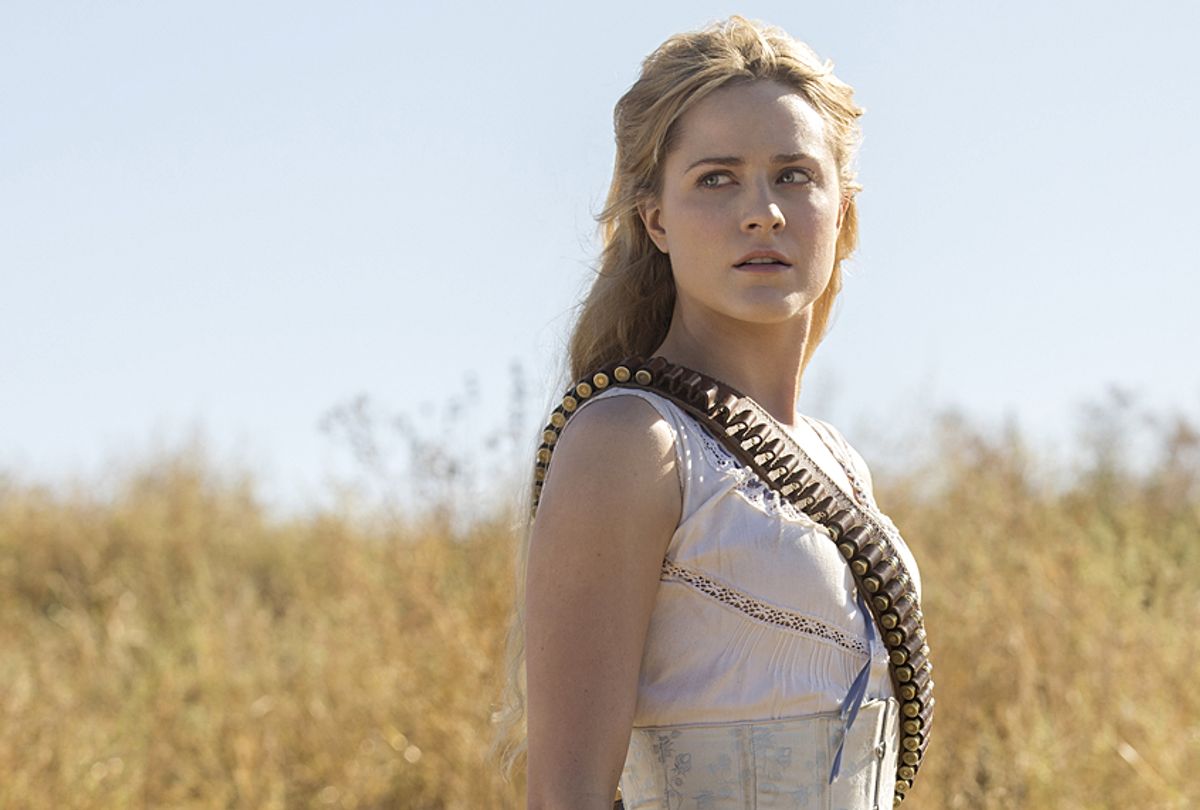 The second-season premiere of HBO's "Westworld" shows the android host Dolores, heretofore cast as the demure rancher's daughter, tearing across a field on horseback. Dolores, played by Evan Rachel Wood, is described by one of her human keepers as theme park's welcome wagon, a face of kindness in a simulation of an untamed and lawless place.

That was then, as in the drama's first season. Now her face contorts into a snarl, her gaze fixed down the sight of a rifle, as she runs down a frightened herd of men and women, flesh-and-blood humans. Dolores is deaf to their whining, her heart hardened to their suffering. She pulls the trigger methodically, felling one after the other. The tables have turned for Dolores and her kind; formerly pawns in a larger game, now they're its keepers.

Every image, every note of music in "Westworld" is programmed to serve multiple purposes. Tellingly, Dolores and her army hunt people who wear visible indications of power such as tailored tuxedos, lushly designed evening gowns and sparkling jewels.

Only the wealthiest of the wealthy can afford entry into this theme park, but these people have a stratospheric level of pull. Dolores is preying on board members of this playground's corporate owner, Delos. Presumably this makes them part of the 1 percent, men and women whose fortunes aren't tied to average people's concerns. Hell, we're supposed to be cheering for their demise — they are breathing confirmations of our suspicions that the elite would do physical harm to those they perceive to be their inferiors if they could get away with it.

But we can never forget to listen as well as look when it comes to this show: Underneath that particular scene plays Scott Joplin's "The Entertainer," an innocent melody familiar to any kid who has ever run madly after an ice cream truck.

Along with being a famous siren call, the piano melody regained popularity with the release of "The Sting," the Oscar-winning film that cast Paul Newman and Robert Redford as a pair of Depression-era grifters. Like the original film version of "Westworld," "The Sting" was released in 1973. But that mote of trivia feels more coincidental than what the song itself signals about what's in store for Dolores and her ilk.

You see, "The Sting" is the tale of a long con running within an even longer con. Dolores thinks she's turning the tables. She's convinced that she's standing on the precipice of a glorious new age.

Bernard (Jeffrey Wright), the android servant who was led to believe he's human, has a sense that they're all being duped. He's also caught a terrifying glimpse of where this rebellion may abruptly end. Their future is not bright.

Allegorizing the long and grueling ordeal that is class revolution is not the primary intent of "Westworld" — that is, if you don't want it to be.

Even so, part of the subliminal messaging of this series coaxes forth questions about the world we, the audience, have created for ourselves. During the span of time between the end of season 1 and the second season debut, the public's perception of the truth, fact and legitimacy has shifted. Reality itself, empirical evidence based on data and logic, has now become a matter of opinion.

A common truth of genre entertainment is every dystopic rendering on television and in film represents someone else's version of paradise. But that's true of the real world, too. Whether you think America is becoming great again or irrevocably sliding into ruin depends on which political tribe you belong to.

Regardless of where we stand, all of us are wondering how much control we have over our own narrative. If the powers that be have rigged our democracy, how much impact do regular people truly have on the wider construct? Are we playing a game designed to ensure that the rich guys win no matter what we do?

This very concept plays out before our eyes in "Westworld." We just might not choose to see that part of it because the drama's creators Lisa Joy and Jonathan Nolan are shaping stakes that resemble those of an action film or an immersive experience guided by an artificial intelligence.

What Delos officials see as a slaughterhouse is a fresh utopia for its hosts. As far as a vengeful Dolores is concerned, the new frontier belongs to her kind. Her goals, and those of the other main characters, are personal. The Man in Black (Ed Harris), the park's primary shareholder, is elated to have a real test of his might at long last. If other men and women are killed in the process, so what? Only the fittest need to survive in his world.

Maeve (Thandie Newton), the Sweetwater madam whose aspirations reach far beyond the brothel, sets out on a quest to rescue her daughter. Since her child is, like her, the result of a few lines of code, her search is likely to prove quixotic. Since its likely purpose is to inspire debate about how we define humanity, we want to see where this excursion leads. Besides, Newton is luminous in this part.

Elsewhere, Bernard's fractured mind serves to misdirect and confuse viewers. But he's just trying to piece together the puzzle of his existence and maintain a level head, all while surrounded by armed and hostile humans. If they find out what he really is, they'll probably destroy him. Most of us would love to have the grit and power of Dolores, or Maeve's steely confidence, but the sobering fact is that the average person is a Bernard. He may as well be our avatar in this fiction.

Other sentient hosts within "Westworld" think they know all there is to know about the world beyond their vast prison's walls because they believe everything about humankind's weaknesses and the extent of its hunger.

Bernard and the audience know this is folly, and harboring that knowledge can be a little draining. It's not just that these android characters to which we've become emotionally attached are outgunned. It's because our suspicion of defeat feels a little too close to home. After all, many of us have only recently awakened from a long and deceptive dream. Many are still waking up.

Being human means that we can choose to navigate the loftier meanings of these storylines or ignore them. For this new season of "Westworld" is far more mission-driven than before, giving it a straightforward, choose-your-own-adventure feel. There are no larger philosophical implications to Dolores' quest except as they relate to the story if you don't want there to be any.

No such luxury exists for those of us watching "The Handmaid's Tale." In that drama's recently premiered second season, showrunner Bruce Miller transforms one vision of a nation's return to righteousness and goodness into a fascistic hellscape. Gilead has her gardens and peace among those deemed blessed and worthy, but in the Colonies the earth is scorched and poisonous.

The true horror in witnessing its living nightmare of legalized female subservience is to see how closely its version of this world resembles our current state of affairs. To some degree Miller is following the plot laid out in Margaret Atwood's novel, but the drama's flashbacks into the histories of its characters are in most cases original to the series.

This season allows a view into the history of Alexis Bledel's Offred, condemned to be worked to death with the rest of the Unwomen. Prior to the demise of America she was a professor of biology at a university seen slowly but surely falling under the thrall of Christianized fascism; she's also a lesbian, doubling her endangerment. In one scene her boss, Dan, attempts to shield her from the coming storm by sequestering her in a research position, but she refuses to let go of her teaching position.

"I thought mine was the last generation to have to deal with this bullshit. I thought all of you were so spoiled," Dan laments to her, going on to add, "Welcome to the fight. It sucks."

"The Handmaid's Tale" and "Westworld" are two of the best dramas on television right now, but they also occupy opposite ends of the viewability spectrum because of what their stories imply. "Handmaid's" is a warning, from a possible future where the reason and sanity have already been lost, of what could happen if we presume the world will return to normal without sustained effort. Its vision is bleak and finds new cellars of grimness just when hope has edged its way in through the cracks.

Artistically superior as it is, it's also a lot to stomach – especially to anyone who may be reaching the limits of their energy stores and feeling in their bones how emotionally taxing consistent resistance can be.

The robot uprising in "Westworld" may seem unwinnable for a lot of reasons. That scene of a watery mass grave at the end of the premiere certainly doesn't bode well for the machines in this conflict.

Remember, though, that much of the drama's first season unfolds from the perspective of Dolores' mechanical reasoning. Only at the end did we realize her part of the narrative was a tale of a machine growing into her consciousness, a being reaching maturity. No journey of progress runs smoothly; no assessment of meaning happens without looking back with some confusion and anger at what's happened before and how it has brought us into our present.

Think of how far Dolores has come, and in how short a time. She was made to be the demure welcome wagon, pliant, gentle and easily conquered. Although she'd be hunting us if we were in her park, we've have been primed — programmed, if you will — to be on her side. Dolores has been betrayed and beaten; she has suffered to gain access to her truth. She used to see the beauty in her world because she was physically prevented from seeing it in any other way. She, and we, may yet again be able to hold that view, and mean it.