The “free-range” parenting movement is a good fight for kids’ rights, but the language isn't doing us any favors 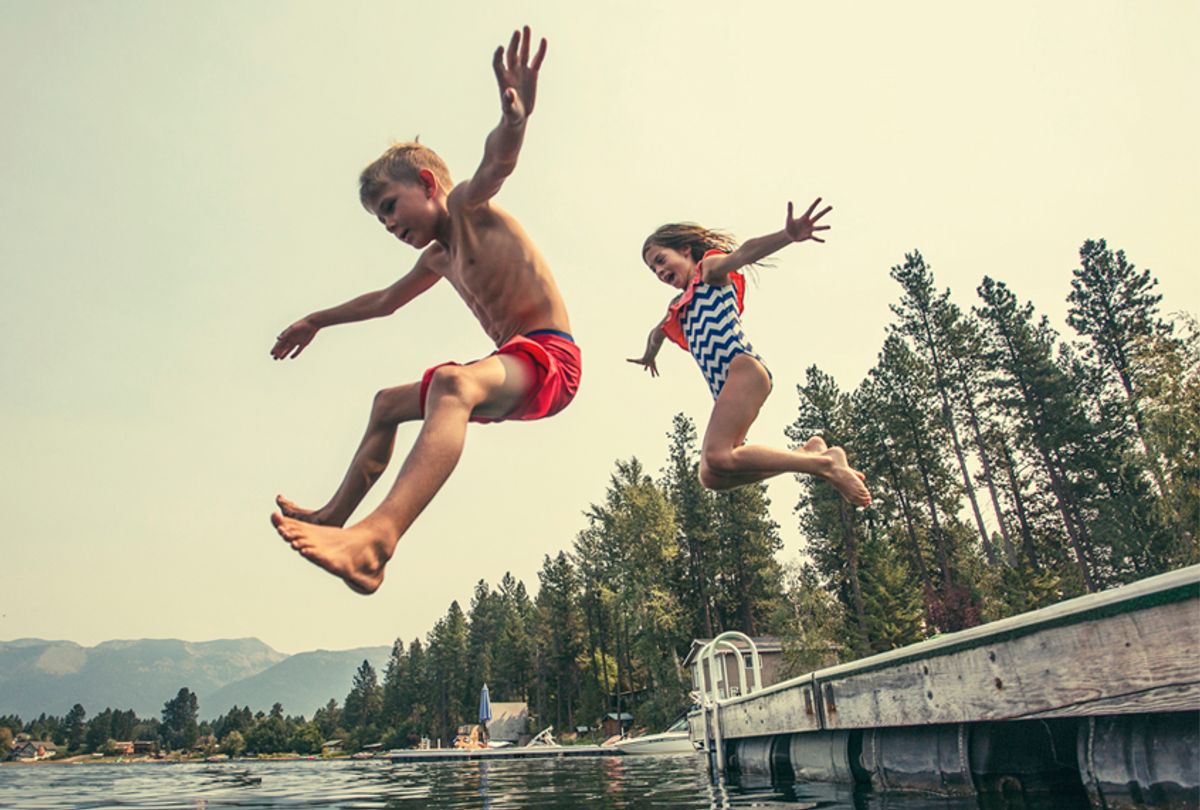 A few weeks ago, I got an email from my 7th grade son’s school. Apparently, a teacher had seen the 13-year-old as he walked around the downtown area near Penn State’s campus and was concerned. Rather than feel supported by a community checking in on him, the whole thing left us with the sense that we were under surveillance.

I’d never given the idea of allowing him to walk in our extremely safe town on his own much thought until the school contacted me, but the email led to some digging after which I discovered that what we experienced was a norm across the country. Turns out, the question of whether or not kids can be out and about on their own has been a significant topic of debate, so much so that Utah recently passed new legislation redefining child neglect. The new law makes Utah the first state in the country to protect “free-range parenting.” Up until the law was passed, a parent could be charged with neglect if their kids were left unattended in public.

I’ve recently written on corporal punishment in schools and child poverty rates, which I consider urgent examples of the very real ways our system is threatening our nation’s kids. But the story of “free-range parenting” adds a critical new valence to the crises facing our kids today, and it really places in stark relief the way that neoliberal ideology has been allowed to govern our lives.

As Henry Giroux has pointed out again and again, neoliberalism is not simply an economic policy that favors free markets over regulation and privatization over public services. It is a whole way of being, and with it comes some fundamental structural changes in how we live.

The core idea is profit over people. And that mindset renders human life into measurable data, manageable resources and quantifiable risk. As Giroux puts it, under neoliberalism, citizens are “reduced to data, consumers, and commodities.”

We can see neoliberal ideology at work in the arguments that suggest that free school lunches are a gift to deadbeat parents and that the only way to solve childhood poverty is through free-market solutions.

While children of vulnerable constituencies suffer the most in this system, the neoliberal mindset has affected kids from all backgrounds. By almost all metrics, it seems clear that the futures facing our young are considerably more difficult than those encountered by their parents. Downward mobility, under and unemployment, and crippling debt all await the young generation. As Zygmunt Bauman points out, this may be the first time that "plight of the outcast may stretch to embrace a whole generation."

So it comes as no surprise that neoliberal ideology has been clearly present in the examples from across the country where parents were threatened with losing their children for the simple act of letting them be outside without adult supervision. In fact, the timing of this policing of kids coincides directly with the rise of neoliberal market economics in our nation. This is the first generation of young people in our nation who have had their parents arrested for letting them walk home from school by themselves or play in the park on their own. Under neoliberalism, we deregulate the economy at exactly the same time that we increase the regulation of human life.

There were a number of high-profile accounts of parents being penalized for allowing their kids to be outside without supervision. In 2015, two kids, aged 10 and 6, were picked up by Child Protective Services when walking home alone from a park in Silver Spring, MD. Their parents were later charged with neglect.

Despite the fact that across the nation crime is lower and kids are safer outside, the perception is the opposite. But even more astonishing is the shift in the way that law enforcement handles a kid found out on her own. Rather than simply check in with the child to see if she is OK, the standard practice is to pick her up and call in the parents for questioning.

The social practice of being hypervigilant of children, yet uninterested in helping those in need, is a clear example of the way that neoliberal logic develops deep contradictions in how it defines lives that matter. Just as neoliberalism advances a punishing logic that claims the state should not provide a social safety net, we experience anxiety that a child left unattended is at risk for some calamity. That contradiction is a perfect example of how neoliberal thinking creates a culture of fear and an atmosphere of threat but is unwilling to develop compassion and community.

It wasn’t until there were a few extreme stories of upper and middle-class families coming under this sort of scrutiny that the whole “free-range” parenting movement emerged as a response. The phrase “free-range kids” was coined in 2008 by Lenore Skenazy after she came under criticism for writing a piece on how she allowed her 9-year-old to ride the subway alone in New York City. “Across the country,” says Skenazy, “parents are getting harassed and even arrested when they let their kids leave the house without a security detail.”

Jessica McCrory Calarco does a good job in her story for the Atlantic explaining why the “free-range” kid model has an “unfair double standard” inclined to disproportionately benefit kids from privileged families. Kids from poor and working-class families are still far more likely to be the subjects of neglect investigations. And while white parents have had to explain their decision to let their kids have freedom, there are no examples of a white kid spending 17 days in foster care after being found unattended, as was the case with the daughter of a 46-year-old black mother from South Carolina.

Even taking into account the bias issues here, there seems little doubt that the “free-range” model of allowing kids to have more freedom is a productive move forward. Quite simply, if our kids are not allowed to explore the world on their own, there seems to be no chance that they will be able to grow up. A kid who has almost no experience navigating the word will have little chance of making the transition to adulthood. And the idea that an unattended kid is at imminent risk is simply not borne out by any facts at all. But most important, kids are not resources to be managed. They are people who have a right to experience the world. And they should be treated as young citizens who have agency in a democratic society, not as trespassers in a police state.

But there is something in the “free-range” movement that still disturbs, and the answer can be found in the very phrase “free-range” itself.

Did it ever occur to Skenazy and all of those who took up her label that it might not be the best idea to compare our kids to chickens?

Sure, we can follow the logic. Chickens used to be cooped up in confining and unhealthy situations. Then the free-range farming movement happened, and a lucky set of chickens got to get some fresh air so that they could live in more humane conditions before those of us privileged enough to pay more for food could eat them.

Free-range kids, as the comparison goes, used to be cooped up by helicopter parents who are only now realizing that their kids will grow up healthier if allowed to get some fresh air on their own.

We can understand the analogy, but we don’t have to use it.

Think about it. The very idea of this movement is that kids are human beings, who deserve a certain amount of autonomy, freedom and dignity. Moreover, it is about acknowledging that parenting is not limited to keeping a child from harm; it is about helping a child thrive. None of that spirit comes through in the phrase “free-range parenting,” though, which sounds more to me like a rewrite of Jonathan Swift’s “A Modest Proposal” than it does a model for recuperating family rights and fighting for a return to a real sense of community.

The fact that a movement designed to help kids have the right to roam free and develop their own sense of self is modeled after a marketing campaign meant to promote a type of farming is not just offensive; it is a perfect sign of the way that even parents with the best intentions can fall under the spell of neoliberal logic.

Kids are not chickens or eggs or assets or objects to manage. Parents don’t let them be outside so they can get Vitamin D and graze on grass. I know that the folks who advocate for free-range parenting don’t think they are treating their kids like farm animals, but their vocabulary certainly is. And, even though the parents in this movement imagine themselves in solidarity with working class parents, the high-brow reference to “free-range” food only serves to highlight the privilege gap.

This neoliberal vocabulary gets in line behind so much of the everyday rhetoric that strips our kids of their humanity. It is used by school boards that analyze the “school-to prison pipeline,” a chilling phrase, made only more disturbing by its inhumane accuracy. It is used in data that references childhood immunizations as protecting resources. It is used anytime our kids are reduced to a statistic, a data set or a market to control.

As Giroux puts it, “the real issue here is about expanding the possibility for agency and responsibility on the part of children.” When children are not allowed to develop their own place in their world and when their movement in public spaces is criminalized, they lose their identity as young citizens who are active participants in society. “Children are not only removed from social practices that enhance their sense of agency and capacity for diverse social interactions,” Giroux explains, “they are atomized and individualized in ways that turn innocence into a curse.”

So, yes, we need to work with our kids to fight the criminalization of their freedom, but we shouldn’t use neoliberal rhetoric to do it.

Neoliberalism prospers because it contaminates our mindset in increasingly invisible ways. So, a first step in countering it is to think a bit about the words we use to describe our fellow humanity — especially young people. I can think of a few people I might like to see go “free-range,” but none of them are children.

How to raise independent kids