Jeffrey Tambors are everywhere: Screaming colleagues, your genius card has been revoked 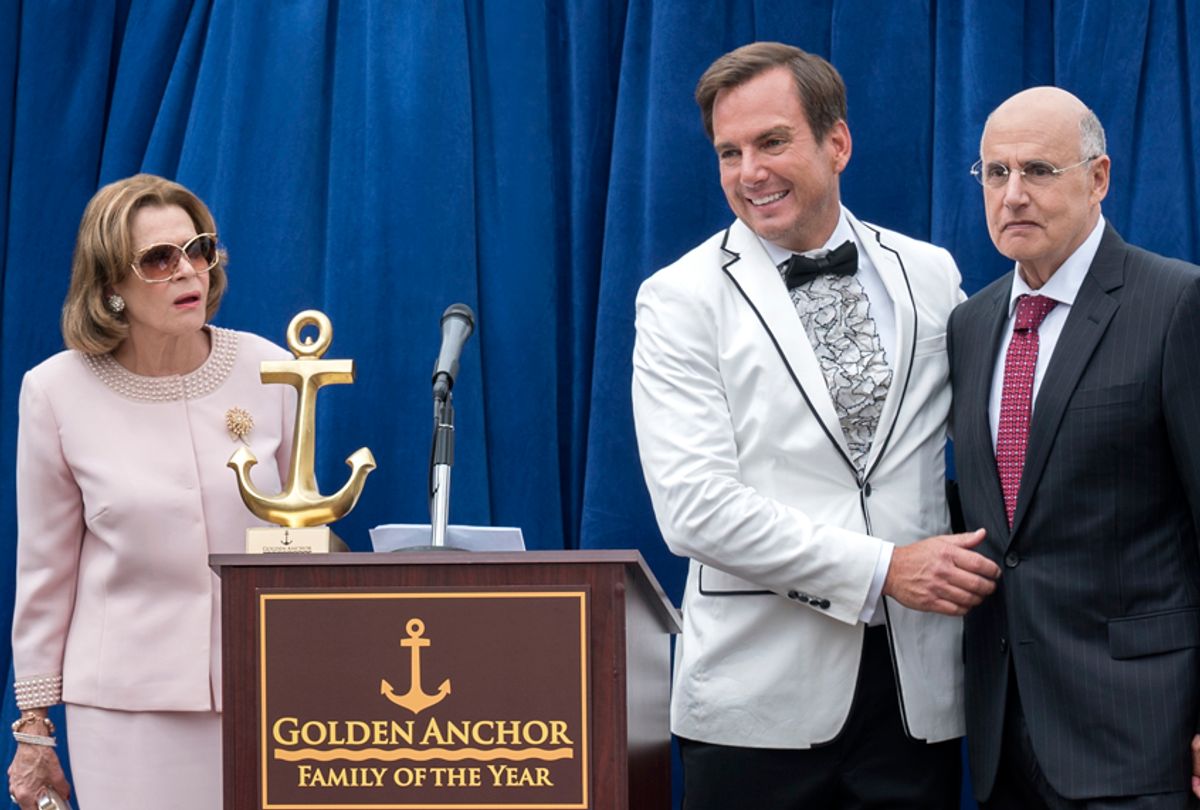 When the slow motion train wreck of that interview with the cast of "Arrested Development" was published on Wednesday, it struck an immediate and nauseatingly familiar chord with workers from all walks of life. You don't have to be on the set of a beloved sitcom to know exactly what it feels like to be on the business end of a temper tantrum — or to watch in astonishment as your colleagues let it slide because that screaming, sputtering baby is so important.

After actor Jeffrey Tambor was shown the door out of Amazon's "Transparent" last fall in the wake of sexual harassment accusations, fans of "Arrested Development" wondered how the news might shake up the new season of that show. (Narrator's voice: It didn't.)

Earlier in May, The Hollywood Reporter ran a soft focus profile of the actor, complete with a pensive photograph and a vague admission that on the "Transparent" set, "I was mean, I was difficult . . .  I was rude to my assistant. I was moody. Sometimes I didn’t talk at all." It seemed a groundwork was being laid for the next step in his public image rehabilitation.

But then, The New York Times interview appeared and detonated all over your Twitter timeline. If you haven't read it, it's a remarkable example of a phenomenon known as the Self-disclosing D-bag. Much of Sopan Deb's piece is a straightforward entertainment story. But when Deb trotted out the elephant in the room, things got weird fast. As soon as the topic of Tambor's on set behavior arose, cast members David Cross, Will Arnett, Tony Hale and, most enthusiastically, Jason Bateman leapt to his defense, even as Jessica Walter admitted through tears, "in like almost 60 years of working, I’ve never had anybody yell at me like that on a set."

The kicker came when Bateman — who has since offered a lackluster apology on Twitter — explained away Tambor's behavior by saying, "What we do for a living is not normal, and therefore the process is not normal sometimes, and to expect it to be normal is to not understand what happens on set. Again, not to excuse it . . . but to be surprised by people having a wobbly route to their goal, their process — it’s very rarely predictable."

He continued: "All I can say, personally, is I have never learned more from an actor that I’ve worked with than Jeffrey Tambor. And I consider him one of my favorite, most valued people in my life."

One day and a whole heap of outcry later, David Cross followed up with an apologetic interview in Gothamist in which he stated, "I will unequivocally apologize to Jessica. I'm sorry that we behaved the way we behaved," before adding, "There's never an excuse ever for yelling at somebody and humiliating them in front of other people. And there was no excuse when Jessica did it . . . but it didn't have the same kind of feeling that Jeffrey's did."

And there it is — gaslighting in real time.

Oh, the contradictory backflips that can be done to justify verbal abuse. It wasn't that bad. OK, maybe it was, but other people do it too. OK maybe not to that extent, but you have to give him special consideration; that's his process.

When writer Jessica Wakeman asked on Twitter Thursday, "Out of curiosity, who else has been yelled / shouted at by a man in the workplace?" she quickly amassed over a thousand replies.

"A boss yelled [really yelled] and threw a burrito at me."

"A lawyer I worked for when I was 20 cussed me out and spat water at me because I got him water without ice."

"Had a boss who screamed and threw a stapler at me. Then screamed at me for ducking. My great crime was not double-spacing after every period."

I shared my own tale of being screamed at for a male colleague's screwup, because I was a more convenient target. Stories from law firms. Restaurants. Hospitals. Schools. Health clubs. Publishing.

Not all screamers are male, of course. They come in all shapes and sizes. What they do have in common is a galling sense of unearned entitlement, along with, frequently, a phalanx of enablers to normalize their behavior. But there's no denying that the macho culture found in a great number of industries perpetuates the fantasy of the masculine genius, flinging office supplies and bellowing his head off because you know, he cares.

"Difficult" genius is irreplaceable, as evidenced by Jason Bateman's eager assurance to Tambor in the Times that "I won’t do it without you. I can tell you that." You, meanwhile, the waitperson/assistant/costar being humiliated, are expendable.

The past several months have been a painful, exhausting, often enraging examination of the elaborate system of excuses for inexcusable behavior so many of us have faced in our careers. Early into this whole new terrain, the torrent of backlash hot takes began raining down, asking if maybe #MeToo was going too far. A quick Google search today yielded me one from a popular site that had been posted . . . three hours earlier. Here's the response to that: No it has not.

Writing last week in Vulture, comic Rebecca Corry revealed the retribution she faced for disclosing that Louis C.K. had masturbated in front of her, because, "He just asked to jerk off in front of you, what’s the big deal?" And in her conversation with the Times, Jessica Walter — while crying — felt the need to qualify what happened to her by noting that "He never crossed the line on our show, with any, you know, sexual whatever." The tamping down of legitimate experience marches on.

Yet what is evident, with increasing clarity every day, is this whole thing is still just getting warmed up. Abuse exists on a spectrum, yes. But no one should for a second have to feel that we've got to set the bar for intolerable behavior at being a serial sexual predator. Sexual harassment and sexual abuse depend on secrecy. The crimes thrive in the literal, physical isolating of the victims — eliminating the witnesses, depriving the victim of corroborating evidence, making it always come down to he said/she said. Physical and verbal abuse, in contrast, depend on the unique shame of public humiliation. The screamer, with defiantly oversized behavior, all but dares you to fight back. After all, what's the point of delivering an epic beatdown without an audience?

That brand of intimidation is different but very simple and effective — keep your mouths shut, everybody or next time, it'll be you. (This dynamic also works marvelously in abusive families.) It forces those lower on the totem pole to be complicit out of fear of losing their jobs, and it reinforces to those higher up that scaring the crap out of people is an effective motivational tool, as well as a perk of being valued by the organization.

The institutional fear — and despite what Michael Bluth says, not exclusive to this business we call show — is that if the temperamental genius is not sufficiently deferred to, he will be angered and he will take his mighty gifts elsewhere. But that bluff is now being called. A "Transparent" without Maura? A "Today" without Matt? A "Charlie Rose" without Charlie Rose? An Amazon Studios without Roy Price? You know what, OK. You think Jennifer Salke and Christiane Amanpour can't do this — or can't do it without being disgusting? Well, let's try it and see.

Creating a safe, productive workplace isn't just about preventing sexual assault. It's about having enough respect for your fellow human beings — and enough self-control as a goddamn toilet-trained adult — to handle frustration in a way that doesn't frighten other people. It's about not making excuses for other people who do.

Who exactly would you be, powerful, protected individual with limited impulse control and a bad temper, without the salary, without the title, without your simpering apologists? Is it possible you'd be just another mediocre embarrassment to your profession? Because the true geniuses I've known in my life have generally been curious, enthusiastic individuals who really don't have much time or inclination to be petty and vindictive. And the ones who have been? Fortunately, we're not yet at such a genius deficit that a single one of them couldn't be replaced. The genius card has long been a convenient excuse for abuse. But now, finally, finally, it's starting to come back declined.

Alia Shawkat on being ignored in Hollywood

"My voice is not always heard"