No more swimsuits, and no judging on looks. But it's still women competing and being judged by strangers 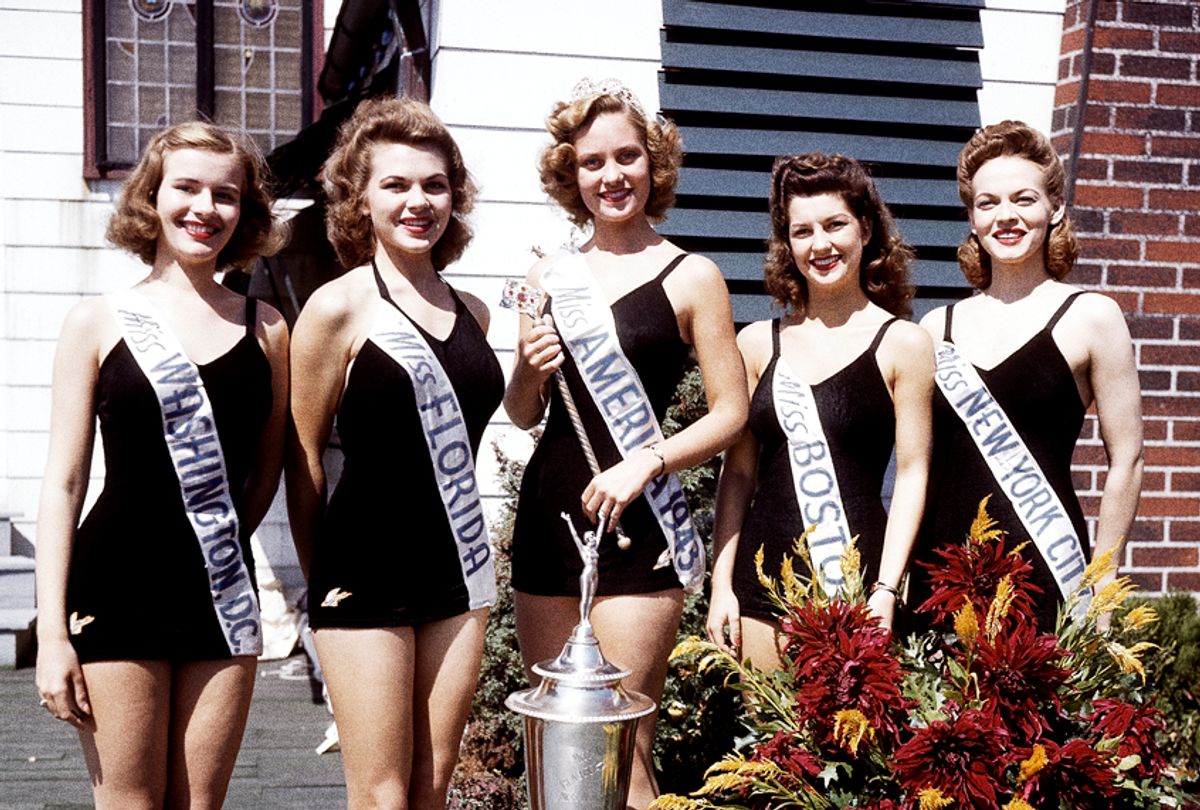 Calm down, everybody; Miss America isn't turning into Lilith Fair.

On Tuesday morning, the 97-year-old institution announced it was making some big updates, including — as every single major news outlet then led with — eliminating the swimsuit portion of the show. The news came first on "Good Morning America," which pointedly described the organization as "changing in the wake of the #MeToo movement."

Miss America 1989 — and new chair of the organization's board of directors — Gretchen Carlson was also on board to talk to "GMA" about the shift. "We are no longer a pageant, we are a competition," she said, before dropping the big one. "We will no longer judge our candidates on their outward physical appearance. That's huge. That means we will no longer have a swimsuit competition. We will also be revamping our evening gown competition phase as well." A Miss America that's not a beauty pageant? What would that look like?

The quaint tradition of parading young women around in bathing suits and gowns and then ranking them for it has seemed out of sync with the times for decades now. The protest that famously sparked the association of feminism with bra burning was FIFTY years ago, when hundreds of women converged outside the Atlantic City Convention Center to call attention to the "ludicrous 'beauty' standards we ourselves are conditioned to take seriously." A few years later, the incident inspired a TV movie called "The Great American Beauty Contest," in which a feminist infiltrates a beauty pageant, wins and promptly realizes how much she really just wants to be a beauty queen.

Through decades of social change and occasional progress, the institution just kept chugging along, clinging to its uniquely american ideal of old-fashioned, toothpaste commercial wholesomeness with straight up ogling. The Venn diagram really came together in 1984, when nude photographs of the pageant's first African-American winner, Vanessa Williams, emerged and were published in Penthouse without her consent. The issue sold six million copies and made publisher Bob Guccione a reported $14 million. Williams, meanwhile, was forced to resign in disgrace. But times change. It only took the organization 32 years to invite her back to the pageant and to apologize.

For decades, the institution of Miss America has served as one of our frankest reflections of the nation's deepest biases. Aside from the whole high heels and bikinis thing, there's the racism exposed when when the pageant crowned Nina Davuluri its first Indian American queen in 2013. She was promptly greeted with a torrent of online abuse — plenty of which depicted her as a "terrorist." And although lesbians have been with us always, the pageant didn't feature an openly gay contestant until Erin O’Flaherty donned the sash as Miss Missouri two years ago. Two years ago. Yet while the pageant has been slow to grow, beauty queens have been making their own strides. They've used their moment in the spotlight on the show to speak out about sexual abuse and illness. Last year's contestants included food insecurity, addiction and mental health awareness in their platforms.

But it wasn't until the #MeToo movement that the institution was forced to confront head on that maybe there really was some toxic thinking about women baked into the recipe all along. In December, chief executive Sam Haskell, board chairman Lynn Weidner, pageant president Josh Randle and board member Tammy Haddad all stepped down after HuffPo revealed internal correspondence about previous winners that "maligned, fat-shamed and slut-shamed" the women. Included among those singled out for scorn was Gretchen Carlson, for her "push to modernize the organization and her refusal to attack former Miss Americas." Just a few days later, she was tapped to head the organization.

It must have been quite a day for Carlson when the story broke. Carlson has been up and down Gross Behavior Street plenty of times in her thirty year career, and was an early adopter for the #MeToo movement. In 2016, she left her position at Fox News and filed a sexual harassment suit against its chairman Roger Ailes. After more women at the network came forward with their own tales of harassment, Ailes stepped down mere weeks later. Carlson soon settled with the network for $20 million and a public apology stating that "Gretchen was not treated with the respect and dignity that she and all of our colleagues deserve." Carlson told NPR last year that what happened to her was a common situation, one in which "The powerful man has all the power. And the women who are trying to become employed or stay employed have none."

So who better than she, the Miss America who helped take down Roger Ailes, to speak to the changes she and her colleagues have been working on over the last few months? As she unveiled the very iPhone-like banner of "Miss America 2.0" to Miss Georgia runner-up Amy Robach on Tuesday, Carlson seemed genuinely enthusiastic about recruiting a new generation of Misses. "We want to be open, transparent, inclusive to women who may not have felt comfortable participating in our program before," she said. "We're interested in what makes you you. At the end of the day, we hand out scholarships to these women. We want more women to know they are welcome in this organization."

And she added, "This is a new beginning, and change can sometimes be difficult. I know a lot about change, my life has worked in mysterious ways. I could never have expected what would happen when I sued my former employer at Fox News for sexual harassment 22 months ago. But look what has happened."

What has happened so far is a deluge of headlines focusing exclusively on the end of the swimsuit competition. It's understandable that the removal of one of the defining aspects of the event would be newsworthy. The pageant began, after all, as an Atlantic City "bathing beauty revue." The swimsuit was the point. And yet the exaggerated attention on the swimsuits suggests perhaps we have not yet achieved full wokeness. The Men of Twitter have, meanwhile, not been this upset since the last time a woman was cast in an action role. A sports journalist, for instance, boggled that "They are eliminating swimsuit and evening gown competitions in favor of judging women based on their confidence & self-esteem. I swear to God. This is a real story." He then of course naturally mused, "Shouldn't contestants all appear in burkas?"

But it hasn't just been men who've struggled to get their heads around this brave new world. On "GMA," Robach responded to the news by marveling that Miss America will now feature "women of all shapes and sizes, because typically we see swimsuit-ready bodies up on that stage." Yeah, I get it but here are the things humans need for a swimsuit-ready body: Swimsuit. Body.

In making the pitch for a new kind of DEFINITELY NOT A PAGEANT, Carlson hearkened to Miss America's eternal argument for it existence — the scholarships. There's no doubt that the organization has given money to promising young women that helped them in their academic careers, as well as providing a platform for future journalists and entrepreneurs. But in 2014, John Oliver challenged the organization's claim that it was "the world's largest provider of scholarships to women" and found that its total 2012 scholarships amounted to $482,000 — substantial but somewhat short of its claims of $45 million "made available" to contestants. After an internal investigation, Miss America promised "full transparency" and changed the wording in its materials.

"Who doesn't want to be empowered, learn leadership skills, and pay for college — and show the world who you are as a person from the inside of your soul?" Carlson asked on Tuesday. Empowerment! Now with optional bikini waxing!

I am all for handing money to smart, talented young women — including women whose waist-to hip-ratio is outside the 0.67 to 0.8 range. As a fan of both "Miss Congeniality" and "Pitch Perfect," I'm also frankly excited at the prospect of a diverse field of ladies having adventures in a previously restricted realm.

The pageant — I'm sorry, competition — had to change if it was to survive at all. Mired in scandal and its own outdatedness, a bold revamp was the only chance it had to endure. But Miss America now also runs a high risk of fake positivity, the kind of tut tutting that makes conventional looking people and their admirers feel benevolent. The close cousin of true diversity is always tokenism, and it'll be interesting to see the women who now come forward to compete, and how the judges assess them. Just a reminder that it's not brave for women to exist in public while being short or nearsighted or a size 12, nor is it an act of charity to applaud them for it. And lest there be any fears of the whole thing finally becoming a parade of bra burning, rest assured it's still at its heart what it's always been. Women competing against each other, and being judged by strangers.

The perks of beauty