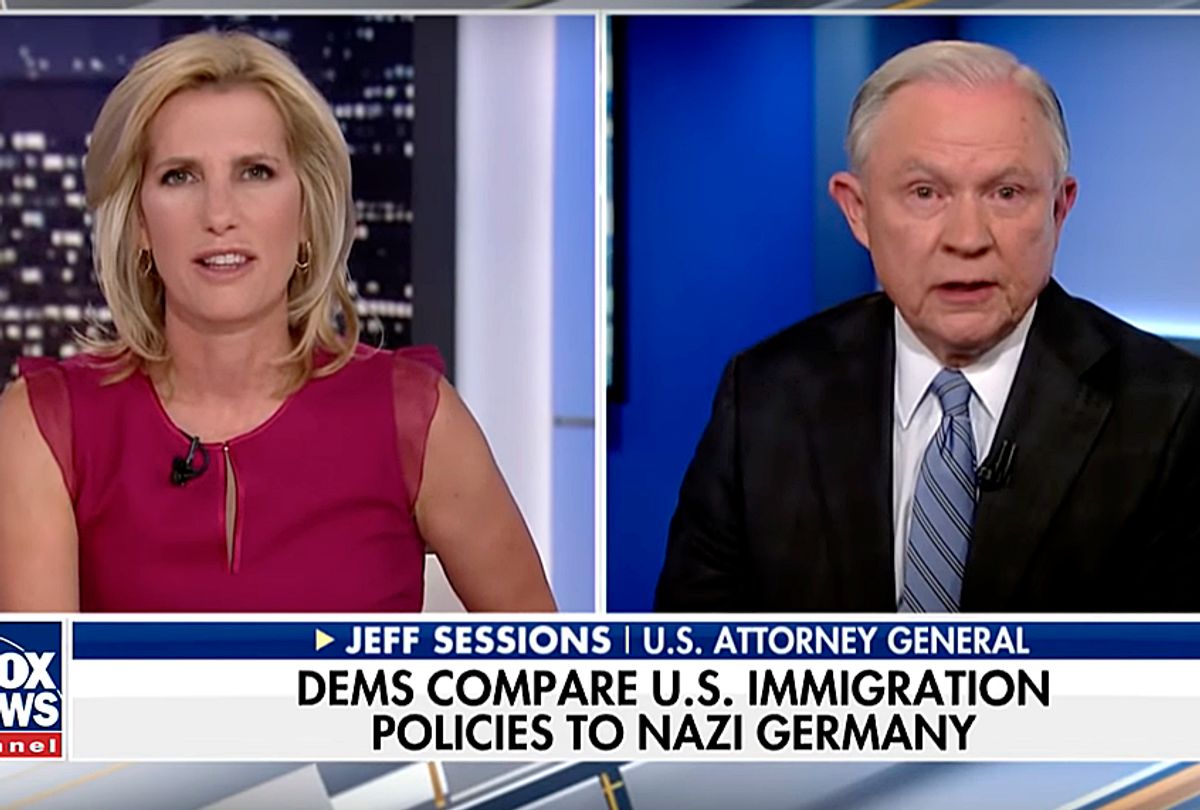 Ingraham, who argued during the program that the detention facilities where undocumented children are being held are "essentially summer camps or, as the San Diego Union-Tribune described them today as looking basically like boarding schools," pointed out that a number of former First Ladies have condemned the current policy. She then asked Sessions about the charges that there is something Nazi-esque about this new policy:

"Well, it's a real exaggeration, of course," Sessions told Ingraham. "In Nazi Germany, they were keeping the Jews from leaving the country. But this is a serious matter. We need to think it through, be rational and thoughtful about it. We want to allow asylum for people who qualify for it, but people who want economic migration for their personal financial benefit, and what they think is their families' benefit, is not a basis for a claim of asylum. But, they can make that claim, we will process it, and I will review the situation and make a decision."

He added, "Those children, if the parent brings them across the border in an unlawful area, and the parent is deported, they will take the children home with them. That is true. If the parent claims asylum and is allowed to stay here, then the children stay here also, and they're kept in Health and Human Services' custody."

As historian Edgar Feuchtwanger explained to Salon earlier this month, the analogy between Trump's policies and those of Adolf Hitler isn't based on immediate one-to-one comparisons. Instead, they draw from the fact that, in incremental ways, Trump's administration is encouraging Americans to stop recognizing the basic humanity of other people that the White House has singled out for persecution.

"We knew of course that Hitler was a bad thing for us, we knew that, but we didn’t know that he was going to turn the world upside down and kill people by the millions," Feuchtwanger told Salon. "We just didn’t know how quickly. One can’t anticipate a thing like that."

And as the United States Holocaust Museum’s website explains:

In January 1933, some 522,000 Jews by religious definition lived in Germany. Over half of these individuals, approximately 304,000 Jews, emigrated during the first six years of the Nazi dictatorship, leaving only approximately 214,000 Jews in Germany proper (1937 borders) on the eve of World War II.

In the years between 1933 and 1939, the Nazi regime had brought radical and daunting social, economic, and communal change to the German Jewish community. Six years of Nazi-sponsored legislation had marginalized and disenfranchised Germany’s Jewish citizenry and had expelled Jews from the professions and from commercial life. By early 1939, only about 16 percent of Jewish breadwinners had steady employment of any kind.

Feuchtwanger also pointed out that the lack of empathy and indifference of Americans who are confronted with these human rights violations is what makes them so frightening.

This isn't the first time that Sessions has misused history in order to justify Trump's family separation policy. Earlier this week, Sessions claimed that the Bible itself supported what the administration is doing to undocumented immigrants, according to USA Today.

"I would cite you to the Apostle Paul and his clear and wise command in Romans 13, to obey the laws of the government because God has ordained them for the purpose of order. Orderly and lawful processes are good in themselves and protect the weak and lawful," Sessions told reporters.

Here is the actual passage from Romans 13:

Let everyone be subject to the governing authorities, for there is no authority except that which God has established. The authorities that exist have been established by God. Consequently, whoever rebels against the authority is rebelling against what God has instituted, and those who do so will bring judgment on themselves.

As USA Today pointed out, even if one shares Sessions' interpretation of that biblical passage, it has been used to support some past causes that even Trump supporters would be hard-pressed to defend.

Prior to the Civil War, after Congress passed the Fugitive Slave Act, the passage was cited again. The act, which allowed slaves who had escaped to freedom in the North to be forcibly returned to their owners in the South, was employed this time to rein in anyone who would challenge the lawfulness of slavery.

The passage was used once again in the civil rights movement of the 1960s. The Rev. Martin Luther King, Jr. famously made a point about it in his “Letter from Birmingham Jail” as he explained that Christians should subject themselves to the governing authorities as they do good, not evil:

Since Trump's family separation policy was implemented, his administration has tried to defend itself by doing everything from denying that it was in place (wrongly), claiming that it had been implemented by Democrats (wrongly) or arguing that the only reason it hasn't been reversed is that Democrats won't come to the negotiating table on an immigration reform bill (which, if true, would mean that Trump is literally holding the children as hostages so he can achieve his legislative goals).

In fact, the policy is in place because it was strongly supported by top Trump administration officials like Chief of Staff John Kelly, senior policy adviser Stephen Miller and Secretary of Homeland Security Kirstjen Nielsen. As Sen. Lindsey Graham, R-S.C., admitted on Monday, "President Trump could stop this policy with a phone call. ... He can. I'll go tell him, 'If you don't like families being separated, you can tell DHS to stop doing it.'"