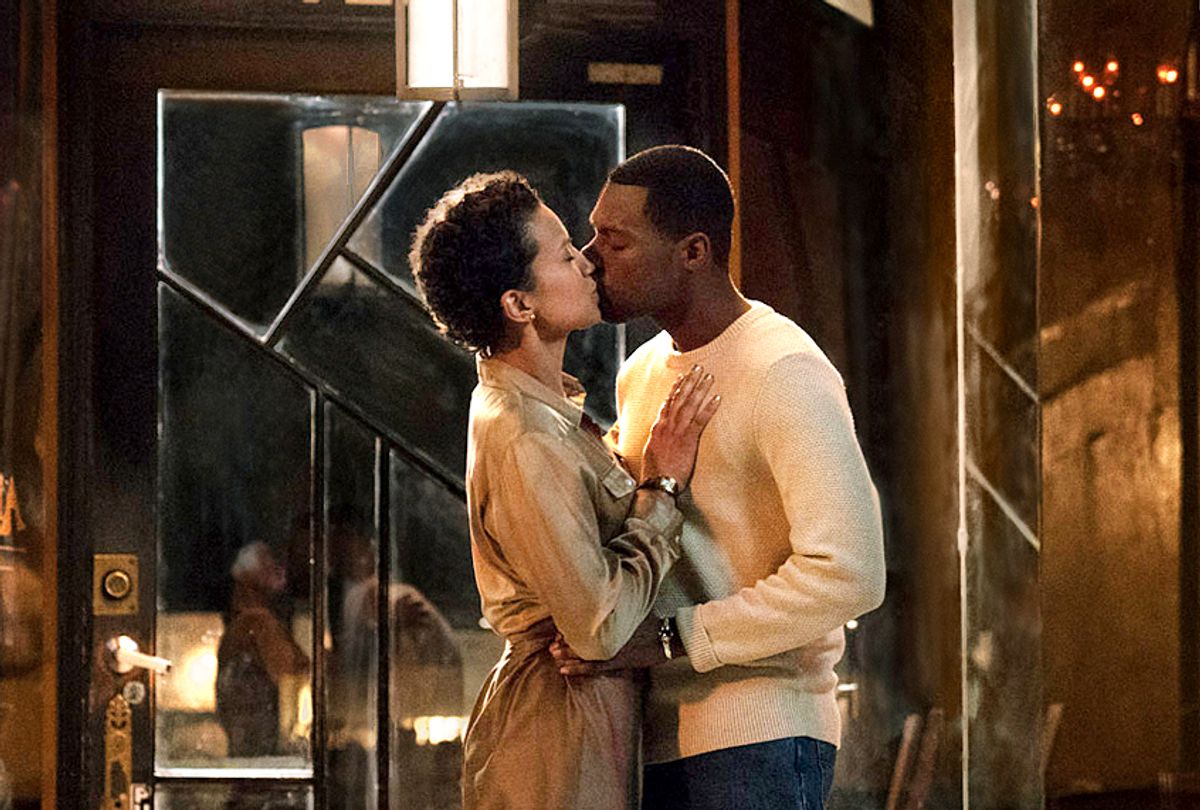 Michele Weaver as Nuri and Will Catlett as Yasir in "Love Is__" (Michael Desmond/Warner Bros.)
--

To the best of my recollection there has never been a TV series fronted by a predominantly black cast that makes romance — one romance in particular — its primary focus. To clarify, I’m talking about romance in all of its intoxication, pain, giddiness and lunacy, as the center of two lives.

Not as a catalyst for soap opera conflict, or an element of a character portrait.  Not as a secondary occurrence to the action that happens where they work or a side story to what they do.

Nope, simple garden variety, crazy stupid love, the kind that knocks a person’s senses out of their head and lasts. That’s the heart of OWN drama’s “Love Is ___,” debuting Tuesday at 10 p.m. And if the idea of a show that’s about messy love between two regular people makes you to react with some version of “ugh,” this show is not for you.

Actually there very well may be a good reason TV isn’t bursting with up-close dramatic examinations of romances, one relationship at a time. Several, in a family? Sure. That’s a classic formula that spawned a number of hits, “This Is Us” and “Parenthood” among them. But head over heels love between two people?

That’s a rare subject for a drama to explore, and even rarer for one to portray the black experience of it, not to mention with the level of honesty and tenderness with which “Love Is ___” handles the story of Nuri (Michele Weaver) and Yasir (Will Catlett). Because there are differences between the experience of a black couple facing Nuri and Yasir’s obstacles and a white couple facing them. A white guy in Yasir’s shoes could be packaged as a free spirit finding himself. Yasir’s just broke and proud and depressed, but in a different show’s hands he may receive far less empathy.

Romantics may fall hard for “Love Is___,” but the world feels fuller of cynics than lovers these days. And hearts scarred by the careless swipes of Tinder and crappy online dating experiences may just find the whole thing a bit precious. At times it feels like a Maxwell slow jam brought to life.

What love is, whether it exists or is possible, is defined by the life experience of the beholder and her heart at after all. And it helps that this love story is inspired by the actual courtship and marriage of Mara Brock Akil and Salim Akil, two producers familiar with the TV landscape and what’s missing from it. Akil is the creative force behind “Black Lightning” on The CW, the only black superhero drama on network television.

Brock Akil, who serves as the series showrunner, explored the black dating experience in her long-running series “Girlfriends” and the excellent BET drama “Being Mary Jane,” both of which exemplify the means by which viewers are accustomed to viewing romance, and black romance in particular — as part of a woman’s quest, not necessarily a man’s.

Or we drop into relationships that work, joining tales of marriage and family life in medias res. In “Black-ish,” Dre and Bow are established as a married couple — and lately, one whose relationship is experiencing real strain. How they got to where they are as a family is treated as less important than where they are now. Their situation is their comedy.

“Love Is ___” dares, quietly, to wonder at the how of Nuri and Yasir. In fact, it removes any notion of will they/won't they anxiety by revealing in the opening frame that they made it, showing two in the not too distant future (and played by Wendy Davis and Clarke Peters) celebrating decades of marriage. “Wiser” Nuri and Yasir are a playfully bickering couple that makes fun of each other’s clothes and rolls their eyes at ridiculous arguments. And in the telling their love story to a filmmaker making a documentary within the show, they reveal all the ways that their relationships almost didn’t happen.

Very much in the vein of  “When Harry Met Sally.”

Black people haven’t gotten the “When Harry Met Sally” treatment in a series before, and while that might not seem like a big deal, it is. You may have noticed that on TV and in film, black love tends to be portrayed as a seed that grows in adversity, or as an unexpected side dish to career and family stories, and sometimes used as a motivator for the hero or to juice conflict.

The central story tends not to be the love affair but everything surrounding it; the love affair exists in conversations at the end of the day between two people or the impact on the main story if and when that love is lost or ripped away.

Here, love is blinding and makes a person see stars and do dumb things; it is shown as an unexpected and inconveniently-timed blessing and curse. Nuri is rising in her career while Yasir has none at all, stubbornly addicted to his dream of directing but unemployed, wallowing in a depression and living in a dying relationship with longtime girlfriend Ruby (Yootha Wong-Loi-Sing). All Yasir has is the friendship of his friend Sean (Tyrone Brown).

But this doesn’t spare him from being undone by the sight of Nuri, whom he pursues and wins over with the offer of nothing but pure devotion. And Nuri is so besotted and overwhelmed in the heady first days of their romance that she neglects to ask him important questions about himself. Like, say, his last name.

Viewing a depiction of love and relationships as a quest equally as important to men as it is to women grants “Love Is ___” a layered sensitivity we don’t often seen on television.  Let’s modify that — the series depicts it important to some men, men like Yasir, and some women, but not necessarily Nuri circa 1997. In one of the most telling lines in the show’s first few episodes Sean blithely tells Yasir that he knows absolutely nothing about what the mother of his child wants; the kid is what matters. This would be shockingly sad if this blunt honesty weren’t matched by Yasir’s insistence on something deeper.

The fact that it’s Yasir who pines for and pursues Nuri, not the other way around, is innovatory among television dramas. We may see that in movies; the rom-com genre is bursting with stories of the nice guy finishing first for once, but those usually star white actors.  Meanwhile on television, romantic life typically manifests as a feminine experience.

When HBO’s “Insecure” accompanied Issa’s ex-love Lawrence on his journey through single life and a black man in Hollywood, viewers lost their minds. What other show explored that storyline, making a black man its center no less?

But then, Lawrence was a prime bachelor material when he broke up with Issa, making good money in tech, driving a nice car.  “Love Is ___” makes Yasir exceptional in a very different way by highlighting his imperfections without allowing them to define him. He is, however, very much aware of them.

Truly he does not look good on paper, and what conflict there exists in these low-key opening hours comes from hiding the truth of this situation for as long as he can, attempting to lean on Muslim faith for strength while simultaneously utilizing the principles for which it stands to burnish his image as a man worth loving.

“When you’re broke,” future Yasir tells the unseen interviewer, “people are always waiting for you to get past that point. Like it’s a cold you can eventually shake. But it’s hard getting past hungry. It’s hard depending on people. It’s hard being a man in the world and feeling like you’ve got no trinkets to prove it.”

When Nuri looked in his eyes, he adds, he saw the man he knew he could be.

Peters delivers these lines with a sobering intensity that sells the hard-earned wisdom of years spend surviving the world, but he’s one of those terrific performers that nails every role he’s in.

But Catlett’s muscular performance as Yasir captivates the viewer in the first four episodes — a necessity, given that his character is a tougher sales pitch than Nuri, in whom Weaver strikes a balance between an illusory daintiness and a self-protecting resistance to sentimentality.

That second quality is a necessity in the misogynistic writers room of the late ’90 sitcom where she works, one lorded over by a supportive yet sexist showrunner Norman (played by Kadeem Hardison) and perhaps unduly influenced by a demanding star who may or may not be patterned after the star of “Martin.”

With the help of her friend and fellow producer Angela (Idara Victor) Nuri not only navigates the boys’ club but begins to ascend its ranks when Yasir comes along — a man who decidedly does not fit into the world of the Hollywood elite. To all the world, and to Ruby, he’s a disappointment. But “Love Is ___” leads with his profoundly poetic nature and loyalty to the women in his life.

And Catlett infuses Yasir with a tempered grace that establishes his chivalry and determination first and foremost, vital traits that diminish his flaws. There’s no getting around that he’s down on his luck and makes dumb decisions, and the drama handles these truths very carefully and truthfully. Even so, if there’s one thing “Love Is ___” does marvelously in its opening hours is prove that being broke and down on one’s luck doesn’t make a man’s dreams less valuable, or make a person unworthy of love.

But then, our culture has grown more cynical about the likelihood that true love exists, despite the evergreen draw of the rom-com. A booming online and app-based dating industry that runs on the common assumption that organic romantic meetings might indicate that many of us believe that the kind of ridiculous love that hits us like a lightning bolt either a relic of the past or never existed in the first place.

“Love Is ___” posits that it exists, and it’s possible for everyone — rich, poor, successful or destitute — to find it. We’d benefit from seeing more stories like it, and certainly more such stories featuring what’s universal about love yet specific to the romance as it's lived by people of color. Enough, anyway, that a show like this ceases to feel groundbreaking. But how sweet it is that this one does.

The acclaimed actor discusses his role in the remake of SuperFly.