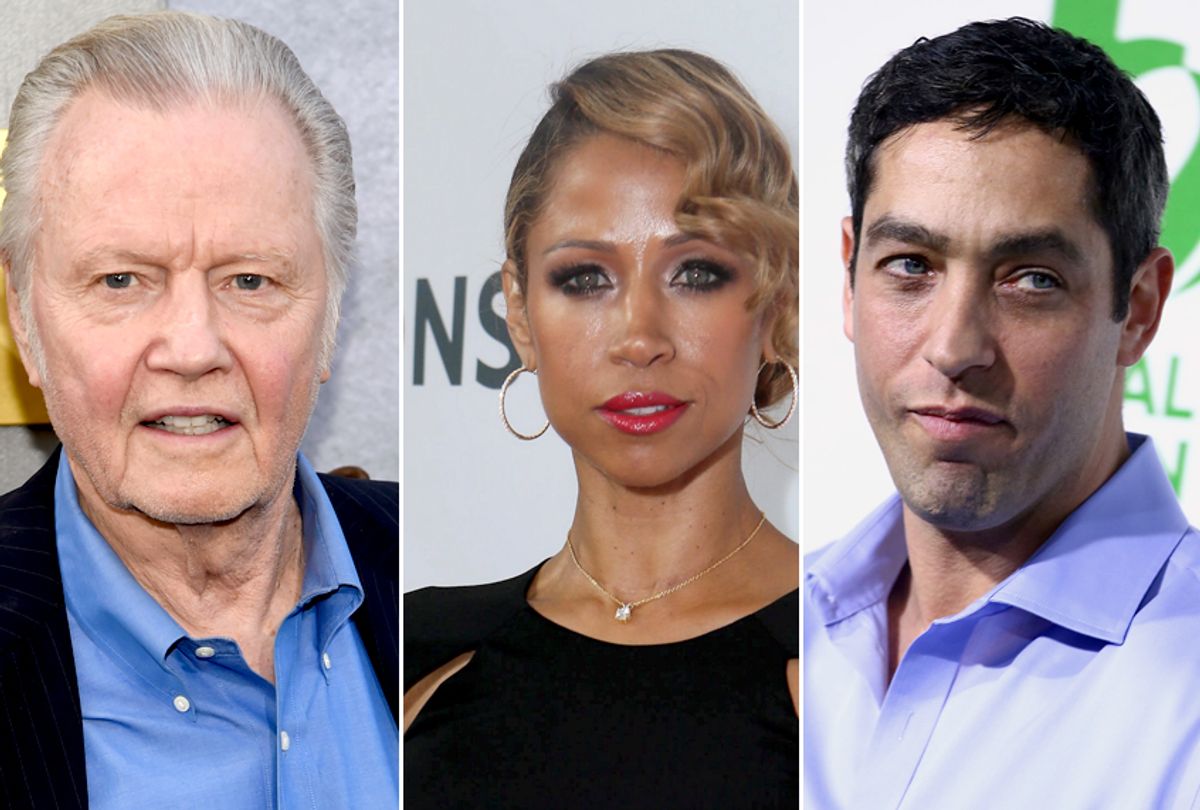 When a former coworker and friend reached out to director/producer Ben Collinsworth about a new film job, he shared few details about a project known as "1973," also titled "Roe V. Wade The Movie." He had worked with this line producer on prior films and has known him for years. It was, as Collinsworth told Salon in an interview, a "very normal hiring." The line producer ran through the plot quickly, telling him that the film takes on the landmark Roe V. Wade Supreme Court case, which legalized abortion in 1973, from a pro-life perspective. But the his colleague promised him, Collinsworth says, that as far as the storytelling in the film goes, "nobody is lying."

The production's transparency regarding the film's content has been scrutinized over the last week. The filmmakers behind "Roe V. Wade" dispute any secrecy or distortion of the film's intent, but members of the crew have said otherwise, prompting a rash of stories about workers on the film  — a production assistant, the director, the first assistant director, a location manager and other cast and crew members — quitting within the first few days of production. Collinsworth left after one day on set, before filming began. (Collinsworth provided Salon with the crew list, which listed him as 2nd 2nd assistant director.)

Dr. Alveda King, niece of Dr. Martin Luther King Jr. and the executive producer of "Roe V. Wade," went on "Fox & Friends" on July 5 to address some of the controversy surrounding the film as well as the exodus of workers. She began by telling host Ainsley Earhardt that the film is meant "to educate the public" with "all facts, no fake news."

"What is happening is folks that are inside the set, inside the project, are getting pressure from Hollywood and from outside," said King. "They don't want the truth to come out."

King's assertion on "Fox & Friends" moved Collinsworth to detail his reasons for his departure from the film in a thread on Twitter. He said he had planned to stay silent, "until the crew was being publicly characterized," which prompted him to clarify his resignation.

"After reading the script, I began to have serious reservations about working on this project. As I learned more about what was planned and who was planned to be there I felt like I could not participate," Collinsworth wrote on Twitter on July 6, adding, "I precisely articulated my reasons for leaving to the Unit Production Manager, citing that I felt this script was a false account of history and the writer was engaging in disingenuous character assassination."

Collinsworth told Salon that while he knew the film had a pro-life spin when he was hired in mid-May, "it’s one of those things when once you’re inside it, you see more." Ultimately he came forward because of what he characterizes as a manipulation of fact and history, as well as potential long-reaching repercussions of such a film.

Packaged as the "real" story of Roe V. Wade, the film bills itself as "the untold story of how people lied, how the media lied, and how the courts were manipulated to pass a law that has since killed over 60 Million Americans," according to a FreeStartr campaign for the movie. (FreeStartr is a "free speech" crowdfunding platform that, according to a Think Progress report, "hosts campaigns ranging from PizzaGate conspiracy theorists to outright white supremacists.")

Nick Loeb, most famous for unsuccessfully suing his ex-girlfriend Sofia Vergara for custody over frozen embryos, is the co-writer, co-producer and now co-director of the film — since the director quit — along with Cathy Allyn. As Loeb told Salon, "We wanted to have a perspective on the issue from both a male and female point of view."

There were also four cameo appearances planned for "Roe V. Wade," according to Collinsworth: Republican strategist Roger Stone, whose cameo Collinsworth says was already shot; Fox News pundit Tomi Lahren, a pro-choice conservative who made headlines over the weekend for her support of Roe V. Wade, and Milo Yiannopoulos, both of which the Daily Beast first reported; and, Collinsworth said, former White House communications director Anthony Scaramucci.

Collinsworth said he was shocked by the casting, which he learned about once he arrived on location, and feels the end goal for the film is about more than just telling a story. "I am struck by what I feel is this movie’s attempt to profit" off of a specific conservative point of view, he said, pointing out that the casting reminded him of building the perfect sports team: "Stacey Dash, well, she's going to plug it on Fox News"; "John Voight, well I can say I have an Academy Award-winner in my movie, check"; "Tomi, Milo, they're going to whip something up, and if not, they at least have enough of an Internet following, that I'll get press there," he said.

On FreeStartr, "Roe V. Wade" has raised over $100,000 of its $1 million goal. "We need your help to fight for the lives of the unborn, because Hollywood refuses to," the campaign claims, noting that the film had previously raised a similar amount on another crowdfunding site, but "because of the political agenda on that site and other social media outlets, our campaign was blocked."

Advocacy is also part of the film's goal, according to its fundraising appeal, published before President Donald Trump announced Brett Kavanaugh as his latest SCOTUS nomination: "Supreme Court Justice Kennedy is retiring this summer and our movie could have influence on who is picked as the new Justice. This could overturn the decision on Roe v. Wade which can save the lives of millions."

Collinsworth said not only was he uncomfortable with working alongside Stone and the other controversial far-right pundits who were part of the film, but the script, which he calls "wild," misrepresented important moments leading up to the pivotal case.

One example imprinted in his mind is the depiction of birth control activist Margaret Sanger, whose work led to the founding of Planned Parenthood. Early in the June 8 draft of the crew script, which Collinsworth provided to Salon, Sanger has a flashback to Silver Lake, New Jersey in 1929. The scene describes Sanger walking past "a burning cross" to address 15 women wearing "white KKK robes." In the script, she disparages black people in the flashback and in 1966, and is portrayed as a blatant racist.

"Not true [that] he was given a full script," Loeb told Salon.

According to Politifact, Sanger did speak to a women's group affiliated with the KKK, which she wrote about in her autobiography, "Margaret Sanger: An autobiography," published in 1939. Politifact points to this excerpt from the book:

"Always to me any aroused group was a good group," Sanger writes, "and therefore I accepted an invitation to talk to the women's branch of the Ku Klux Klan at Silver Lake, New Jersey, one of the weirdest experiences I had in lecturing."

"Never before had I looked into a sea of faces like these. I was sure that if I uttered one word, such as abortion, outside the usual vocabulary of these women they would go off into hysteria. And so my address that night had to be in the most elementary terms, as though I were trying to make children understand."

Jean H. Baker, biographer of Sanger and professor of history at Goucher College in Maryland, told Politifact, "As for Sanger as a supporter of KKK, it is just untrue," she wrote in an email. "She was far ahead of her times in terms of opposing racial segregation. She worked closely with black leaders to open birth control clinics in Harlem and elsewhere. She believed all women should have the information about birth control that rich women had, hence her lecture to the KKK women."

Loeb told Salon that Collinsworth "obviously hasn’t done his research," noting that "the movie is based on 40 books, articles, letters and speeches, everything that is inflammatory has been double sourced and passed through our clearance attorneys".

Casting the pro-choice movement in terms of race appears to be an angle the film explores, as a video clip advertising the film on the FreeStartr site makes this statement: "Abortion is the #1 killer of African Americans in the United States." But Centers for Disease Control and Prevention does not list abortion as a cause of death. Heart disease is the leading cause of death for black Americans, white Americans and Latino Americans, among both women and men.

Loeb said this is a "known fact" sourced from Dr. Mildred Jefferson. He also sent four links echoing this statement, from Human Coalition, an anti-abortion organization that seeks to "rescue" children from abortion; a Washington Times article published under "opinion/commentary" that claims, "It is a scientific fact that life begins at conception"; an opinion article from the pro-life news agency Life News; and a "facts about abortion" one-sheet from Protecting Black Life, whose objective is "taking the pro-life conversation into the Black community."

For Collinsworth, he said he consulted with his family after his one day in pre-production for "Roe V. Wade" and they decided together that he could not in good faith profit from or be professionally associated with this film. He added that he didn't even put in time for the one day he worked. But he also says he feels there's a bigger issue that goes beyond his personal involvement, about the potential fall-out from a film being promoted as factual that he feels distorts the historical account.

"As a society we build ourselves on the stories that we tell and if you tell a lie, you begin to build on it and when it’s a movie, it lasts forever," Collinsworth said. "I can’t live with a lie that’s going to last forever."

The war on abortion

"The way you control a woman is to control her reproduction."