Smart Watch: Top TV picks this week include "Orange Is the New Black" and the "Pose" finale

"Pose" comes to an end, we return to Litchfield and the highly anticipated "Castle Rock" makes its debut on Hulu 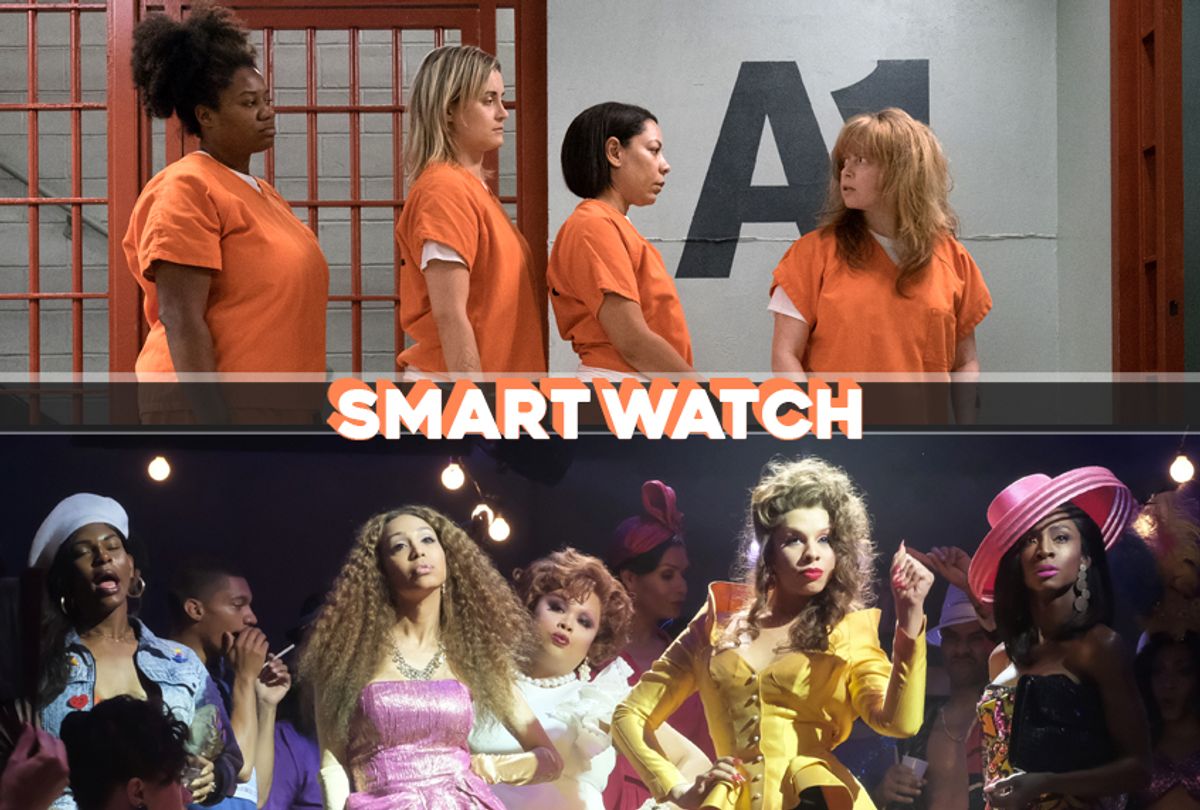 Happy endings are not guaranteed in life. Nor should they be in TV.  Some of the best television series don’t have happy endings, in fact — “The Sopranos,” “Breaking Bad,” “The Shield,” none of those shows leave a person wanting to break into song about sunshine and lollipops.

It’s fairly well understood that an upbeat ending should never be the raison d’être of any series worth our commitment. Great TV isn’t obligated to make us feel good, but under no circumstances should its ending make us feel worse for having spent time with it.

Rather, the job of any worthwhile television series is to keep us going — with the show, with our lives. They don’t merely pass time, they fascinate and maybe even inspire us. This is the give and take between fiction and reality, one drawing from the world and the other taking comfort in others’ interpretation of the world.

And so it is that “Nashville” fans say goodbye to the series one last time Thursday at 9 p.m. on CMT. Now, while I doubt this series will go out with a finale for the ages, given how poorly the sixth season has fared among fans and critics, its passing is at least worth acknowledging. Salon critics had demonstrable love for past seasons of “Nashville,” a series anchored by Connie Britton’s performance as Rayna Jaymes and its bold storylines. Britton left the show in the fifth season and its audience never completely recovered from her departure. Maybe, in this case, all we should expect is a fond and admirable farewell.

As for the main series featured in this week’s Smart Watch, none should to leave a bad taste in your mouth — and considering that prison figures heavily in two plots of new series debuting this week, that’s saying something.

One might send you off to the kitchen on the quest to create a “good bake.” Who knows?

Ryan Murphy’s groundbreaking series featuring a cast of transgender actors telling the story of trans women in New York City's 1980s ballroom scene was not guaranteed a second season after its debut. And you can tell the writers did not take it for granted that the series would get a renewal. That is to say, the first season finale could have served as an impeccable series finale, wrapping up the various subplots unfurled over these eight episodes in a satisfying fashion and nailing the finale with a ballroom blow-out for the ages.

What this series does best, however, is gently and mindfully tug at our heartstrings without overdoing the melodrama. Sunday’s finale begins in a place of pure tragedy (augmented by the perfect use of Simply Red’s overcast hit “Holding Back the Years”) but ends in much-deserved triumph for all of these characters.

This feeling of victory should also extend to its cast of relative unknowns; not only does each seize our attention with stunning performances, but they keep us invested in these people and their stories in ways most shows fail to do. (Surely Billy Porter, who plays Pray Tell, needs a performance nomination for his work here.)

“None of us win when one of us gets beat down, even someone who had the beat-down coming to them,” declares the fierce Mj Rodriguez’s Blanca Evangelista as she pulls another fallen angel up on her heels. Thankfully all of us, along with the cast of “Pose,” are winners at the end of the season: FX has already picked up a second run.

Stephen King fans recognize the significance of this highly anticipated horror series’ title. Castle Rock is the fictional setting in Maine where a number of the author’s stories either take place or are set nearby. The preview episodes present the series as a gift to longtime devotees of King’s stories. Even so, you don’t need to be a student of his literature to appreciate the place a number of characters and references have in the author’s oeuvre. The most significant characters and places are known to just about anyone with a passing knowledge of King’s impact on cinema.

The main employer in Castle Rock, for example, is good old Shawshank State Penitentiary. It is there where a strange and sinister character known as The Kid is discovered in the deepest bowels of the place. He’s played by Bill Skarsgard, i.e. the actor who play Pennywise in the 2017 update of “It,” and in doing so made a number of people soil their Jockeys.

Despite how this may sound, “Castle Rock” is not an Easter egg hunt or a carnival of ghoulishness, although the writers and creators Sam Shaw and Dustin Thomason flirt with the notion that some strange evil may, indeed, be hanging over the town.

At the same time, the series begins with a tight focus on the evils lurking within the town’s residents, something that emerges not long after death row attorney Henry Deaver (André Holland) returns.

It’s an interesting start to a story that captures King's easily digestible storytelling style while hinting at exploring issues of small-town paranoia and close-mindedness. But to prevent the show from warping your brain too much, Hulu is debuting “Castle Rock” with a three-episode drop, saving the rest for the coming weeks.

“Orange Is the New Black,” Friday at midnight, Netflix

Any series that sets its main action in one place has to change its pitch up eventually, and so it goes with season 6 of Jenji Kohan’s veteran drama, which kicks off with the main players gutting it out in Max.

Unlike Litchfield, the maximum security prison is no joke, and a number of characters are facing serious additions to their sentences regardless of the roles they played in the uprising that played out through the fifth season.

Since so many characters’ fates were left up in the air (and we’ll be coming back with a more in-depth examination of the new season later this week), the best way to describe this new chapter is that it demonstrates how extensively the series has transformed since its quirky first season. There are still touches of humor in “OITNB,” but the stakes feel much higher this season. And if you were tired of Piper (Taylor Schilling), be assured that her travails matter far less these days than the fates of her fellow inmates, most of whom are black and brown. Place that fact into the context of the current politics about incarceration and detainment, and you may get a sense of why this season might be the most brutal yet.

We are well into this “new” season, and that word is in quotes on purpose. In reality what PBS is presenting as the fifth season of the Brit hit is actually series three, which aired in 2012 and is only debuting stateside now. It's only truly new to American audiences who haven’t found a way to watch it online.

So on the downside, this is an oldie and if you really want to find out the winner that’s as simple as a trip to Wikipedia. On the upside, we can still pretend that the delightful Mary Berry as well as original hosts Mel Giedroyc and Sue Perkins are still in the tent, even though all of them departed the series following its jump from the BBC to Channel 4.

Further softening the blow is this week’s Sweet Dough challenge, which may be the second most fearsome after the Bread Challenge (which tends to bring out the toughness in Berry’s fellow judge Paul Hollywood). Due to mechanical difficulties sustained during the Pudding Challenge, this week ends with the elimination of two contestants, which is bound to be heartbreaking.

Perhaps you’re thinking, “Really? A true crime show on the weekend? How is does this qualify as ‘smart’?”

To which I’ll answer with another question: Have you watched any of these series lately? They’re bonkers. They are a smart way to make you feel better about how your own life is going.

There are true crime stories, and then there are stories focused on women who commit crimes. And for various reasons, the latter can often be a lot more intriguing. Now, many aren’t all that extraordinary; watch enough of these shows and it become apparent that there are just as many natural-born female felons as male ones, and for many of the same reasons.

Network true crime series must compete with the blossoming trend on cable, though, and as a result shows like “48 Hours” seem a little more bananas than they used to be (submitted for your approval: the sure-to-become-classic episode known as “The Clown Did It”).

This latest entry makes a run at the “Good Girls” crowd, opening with the story of a soccer mom who robs banks and uses her minivan as a getaway car. Apparently the woman witnessed a crime and instead of channeling whatever anxiety that may have inspired into some yarn art, she decided she could also pull off crimes, because why not? (#Feminism.)

What will be interesting to see is whether the production makes her felonious funkiness seem cute or if they drape it with the same amount of gloom and intrigue as the other cases. I’m also hoping that Capri Sun pouches play some role in the scheme, but that’s just me.

Bo Burnham on the R-rating of "Eighth Grade"

Salon talk to the comedian-turned-director about his new film.