After #MeToo allegations, Amazon and Netflix discuss future of "Transparent" and "Master of None" 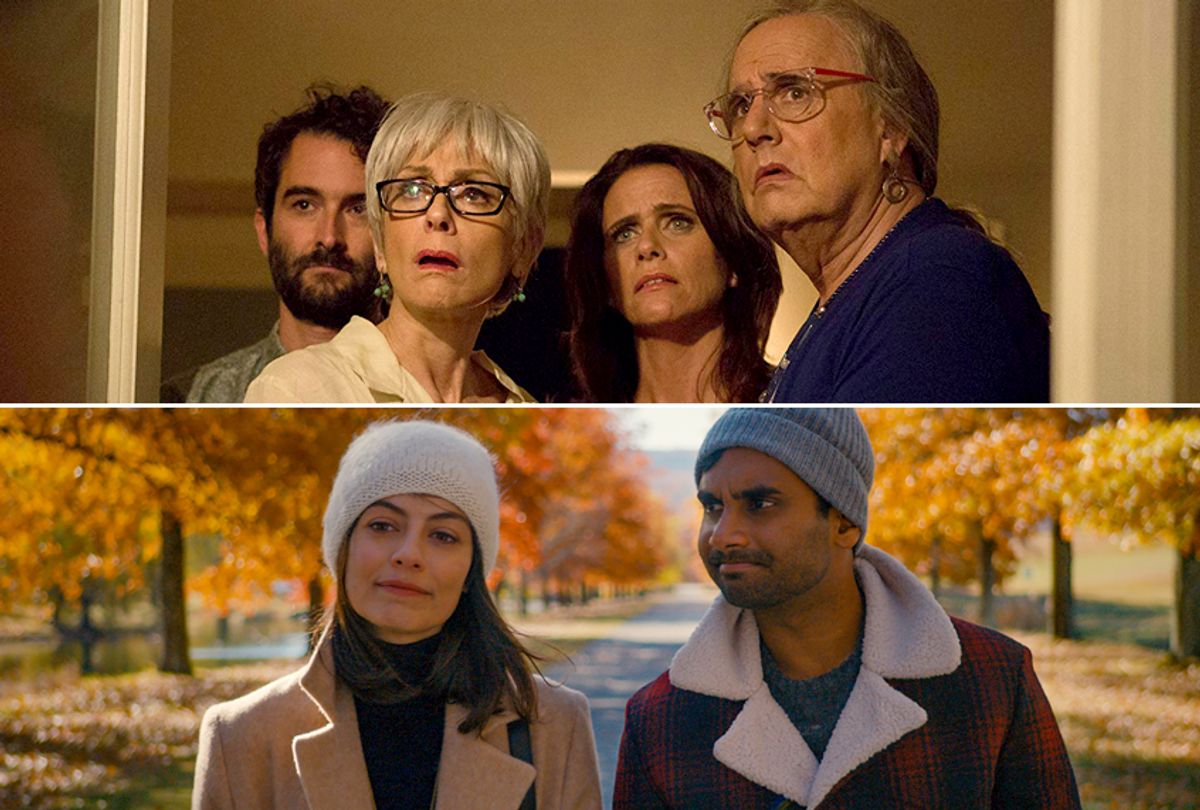 "Transparent;" Master of None" (Amazon Studios/Netflix)
--

Top executives from Amazon Studios and Netflix disclosed new details about the future of "Transparent" and "Master of None" – two critically-acclaimed series impacted by the #MeToo movement – this weekend at the Television Critics Association (TCA) in California. Both shows featured stars who were publicly accused of past acts of sexual misconduct, leaving the fate of additional seasons hanging in the balance as the studios decided how to move forward.

As for the Emmy award-winning show "Master of None," Netflix's vice president of original series responded affirmatively to the possibility of a third season after a claim of sexual misconduct emerged earlier this year against Aziz Ansari, the creator, writer and star of the hit comedy.

"We certainly have given some thought to it," Cindy Holland said to members of the media. "We would be happy to make another season of 'Master of None' when Aziz is ready."

It may not be a particularly surprising revelation that the streaming platform has no qualms about continuing its relationship with Ansari, who denies wrongdoing. From the beginning, the accusations against the "Master of None" creator were greeted with both controversy and skepticism.

Ansari was not accused of rape or manipulating someone to perform sexual acts for career momentum. However, it was alleged that the actor pressured a 22-year-old photographer from Brooklyn dubbed "Grace" into sexual activity, despite her physical and vocal expressions of discomfort.

“I know I was physically giving off cues that I wasn’t interested. I don’t think that was noticed at all, or if it was, it was ignored," Grace said. She added that "it took a really long time for me to validate this as sexual assault."

Grace's accusations were detailed in a lengthy exposé published by the outlet babe in January. For critics of the #MeToo movement, it seemingly verified their fears of a "witch hunt" – an alleged misunderstanding being used as leverage to take a man down. For backers of the movement, the accusation against Ansari opened up the potential for vital and more nuanced conversations about consent.

Amazon had expressed more of a hard line when it came to the former star of "Transparent," Jeffrey Tambor. The actor was fired from his Emmy Award-winning role almost six months ago after two women accused him of sexual harassment. While Tambor admitted to being "difficult" to work with and "mean," he has denied being a predator. Nevertheless, in spite of losing its star, Amazon Studios head Jennifer Salke has confirmed that a fifth and final season of "Transparent" is indeed on the way.

"What form it takes we haven’t quite announced yet, but it exists. And, we’re very excited about [it]," she said Saturday during a TCA press conference. Salke added that "Transparent" creator Jill Soloway would later reveal how she plans to handle the exit of Tambor, who played the series' main character, Maura Pfefferman.

"We were just with Jill this week," Salke continued. "I think I’m going to take it upon myself to just tease that Jill came in with sort of what she’s excited about beyond 'Transparent,' and I think you can stay tuned in the next week or two to hear more about what that is. But, it’s something we’re incredibly excited about. And so, all good. We’re going to give the 'Transparent' fans the closure that they – and we – long for, and do what’s right by – you know – those fans."

Some predict the character of Maura will be killed off, allowing the narrative to be propelled by her family members, who have been reckoning with her identity as a trans woman.

"Transparent" was not only groundbreaking because of its content and the diversity of its cast and crew. Aside from Tambor, many of the individuals employed by the series were members of the LGBT community. It was also Amazon's first original hit – solidifying its early status among rival streaming platforms.

However, Salke offered little more detail about "Transparent," the investigation into Tambor or how the streaming platform would enact systematic changes to quell sexual harassment in the future. Roy Price, the former head of Amazon Studios, resigned in February amid sexual harassment allegations.

For Netflix, who also employs Tambor as a cast member of "Arrested Development," Holland did not have an answer as to whether her studio would renew the series for a sixth season or if Tambor would be a part of it.

"I actually don’t know if that’s a possibility or not," she said. "We haven’t discussed it at all."

Holland also did not provide a release date for the final season of "House of Cards," which will air without Kevin Spacey.

The revelations – or lack thereof – from Amazon and Netflix executives point to the unclear path forward for Hollywood in the era of #MeToo. What happens after exposés of men who allegedly abuse their power are made public? In Ansari's case, what repercussions should a person face if those allegations are not criminal? And most importantly, what institutional changes will studios and executives implement in order to ensure a safe, healthy and equal work environment for all? The responses from Holland and Salke illuminate how far we are from receiving those answers.

The one career tip you should ignore.